The Australian market continues to be excited by the prospect of non-stop flights between Australia and Europe as new technology aircraft arrive, but the reality is their excitement does not convert into sustainable yields, making it unlikely in the foreseeable future for such flights to be operated.

Stiff competition – European carriers have pulled out while British Airways (BA) and Qantas whittle their presence – has reduced the route to one that is fought on cost, where intermediate Asian and Middle East network carriers have an advantage. Geography also poses disadvantages: an ultra long-haul route to a single European point would still require onward European connections, diminishing much of the advantage of the non-stop service. And while arguments continue about whether Qantas should have ordered Boeing 777s instead of 787s, the reality is that the 777 would probably have been of little help in Qantas' current position.

The ultra long-haul proposition is a difficult one. For similar reasons to Qantas, Southeast Asian carriers equally have struggled with their non-stop services to America. These services are primarily point-to-point, which necessarily forgoes many of the advantages of network economics.

Retaining stops in Asia permits attracting regional traffic and, pending bilateral agreement revisions with Europe, paves the way for a new transfer hub in mainland China, bringing the associated benefits of demand from the area.

Non-stop Australia-Europe flights, typically going to London in most scenarios, have been evaluated by airlines, the most notable recent case being Qantas' consideration of Boeing 777-200LR aircraft in 2005. Qantas ruled out the aircraft in Dec-2005 because, for weather reasons, certain months of the year would not allow a full payload. Those few months were to become a blessing to Qantas. Aviation was a remarkably different and less competitive world in 2005. Emirates was not the giant it is today, Etihad was barely two years old and had yet to enter Australia and fuel could occupy only 15% of total costs.

Ultra-long-haul point-to-point flights have proved to be a global struggle. Singapore Airlines has at times cut back on its non-stop services to Los Angeles and Newark; during the GFC load factors on the all-business class service, which is operated with A340-500s, dipped below 50%. Thai Airways ended its A340-500 non-stop flights to New York in 2008 and earlier this year ended its non-stop service to Los Angeles. Delta, which at one point studied its own non-stop flights to Singapore with 777-200LRs but quickly ruled it out, and American Airlines have each ended their non-stop services to India.

Nuances abound but the common theme is one-stop competition and limited O&D demand that is further aggravated by high fuel prices, from which even hedging strategies cannot fully insulate airlines.

Since 2005 aircraft profiles have improved but market conditions have not for non-stop Australia-Europe services. This year's first wave of excitement came with the potential for Boeing's 777 successor to fly non-stop between Australia and Europe year-round. A second wave came recently with Airbus discussing conceptual performance for an enhanced A380.

Neither airframe is captivating carriers. British Airways no longer views the market between Europe and Australia as core. At the end of Mar-2012 BA ended Bangkok-Sydney services, leaving only a Singapore-Sydney flight as part of a Europe-Australia network reduction conducted with joint service agreement partner Qantas. But even before the change, premium traffic was down considerably between the two continents. For all three months of 2012 that IATA has reported on premium traffic trends, Europe-Southwest Pacific has typically seen the sharpest declines by far: 16% in Jan-2012, 19% in Feb-2012 and 24% in Mar-2012. Without premium traffic prepared to pay an additional margin for the convenience of a non-stop, the route would struggle.

BA's pessimistic view comes with it already operating the 777, potentially making a 777 successor integration easier than at Qantas, which does not operate the 777. But even then the longest range version of the 777 successor, which could potentially operate the non-stop flights, would become a niche aircraft in BA's fleet, an undesirable position. 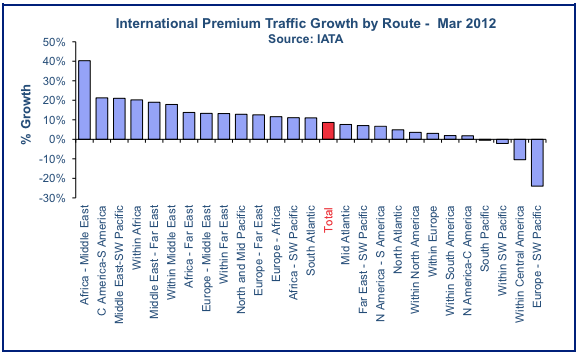 While the 777 successor would conceptually reach Sydney from Australia, an improved A380 would barely make it to Perth – and that of course is at the airframe manufacturer's best case calculation. Domestic connections from the far more populous eastern Australia would still be required and connections through Singapore, Qantas' main Asian hub, would still offer a shorter journey time. A potential service from Perth would come at the partial expense of the Singapore hub, which not only provides local traffic but also cargo. Qantas' planned premium carrier, postponed for the short term, would have provided feed for its long-haul services.

See related article: Qantas may say Malaysia Airlines negotiations are over, but many more chapters still to be written

It was on the back of network feed that Continental Airlines, now part of United Airlines, announced a 787 route to Auckland from its home hub at Houston. As CEO Jeff Smisek rhetorically asked, this ultra long-haul route was not about point-to-point traffic: "How many Kiwis live in Houston who want to fly to Auckland on a daily basis?" he asked. "Three?" United's network and that of Star Alliance, combined with the efficiency of the 787, made the route economically possible, Mr Smisek said.

Australia-Europe non-stop lacks an efficient aircraft like the 787 – Air New Zealand has referred to the 777-200LR as a "flying petrol tank" – and connecting traffic is limited at both ends. The Australian market is small, while in Europe, connections from London would require backtracking to continental Europe, reducing the time saved going non-stop to London compared to a one-stop through Asia or the Middle East. Further, following United's announcement in May-2012 to deploy its 787 between Tokyo and Denver, the new combination hinted that its proposed Houston-Auckland service no longer has its favoured position.

Qantas' European presence compared to Emirates, but the two are on different scales

Prior to BA and Qantas' Mar-2012 Australia-Europe restructure, Emirates typically operated approximately 22,000 one-way seats into London area airports compared to 12,000 from Qantas. Qantas' 12,000 seats were dependent on the markets of Australia and New Zealand as well as its three Asian transfer points: Bangkok, Hong Kong and Singapore, a population pool of around 45 million.

For Emirates to fill its capacity into London, it has not only all of Qantas' markets but also additional points throughout North Asia, Southeast Asia, South Asia, the Middle East and Africa (the traffic also obviously fills other points besides London). India alone has a population of 1.3 billion, and while travel propensity there may be low, it does indicate that Qantas was simply over-exposed to Europe. To bemoan a smaller presence in Europe from Qantas than Emirates, as has been done in the public, is a non sequitur.

Qantas wrongly criticised for lack of 777

Emirates has also been praised for its prolific fleet of 777s, the lack of which in the Qantas fleet has been a contention with its pilot union. The reality is that, even if Qantas had 777s prior to its 2005 examination of the -200LR, the viability of the -200LR would have been far from certain. Virgin Australia around its launch (and prior to the strategy from a new management that favours virtual flying) evaluated the -200LR to supplement its -300ER but also ruled the aircraft out for non-stop services to Europe and New York.

Qantas has rightfully defended its position against its decision to order the 777. The 777 either has not offered sufficient payload or, when it did, Qantas had already committed to other fleet strategies. "By the time the first B777-300ER was delivered in [2004] with the payload range to match Qantas B744 operations, we were already committed to the A380s. A good decision, because the A380s have a 7 per cent unit cost advantage over the 777-300ER," Qantas CEO Alan Joyce remarked in Oct-2011. Additionally, when the first -300ER was delivered, its full capability was not realised by many airlines. Indeed, at the time of delivery the -300ER had orders for 77 frames; today the figure is over 600. Not even Emirates ordered the -300ER before the first delivery, and Cathay Pacific, another -300ER proponent, would not order its first example until Dec-2005.

At that time Qantas had planned its high capacity needs – it was expecting its first A380s shortly – and was evaluating its medium-gauge widebody needs, a role ideal for the 787. "It would have been a retrograde step at that point to revert to the 777s because by then they were already an older generation of technology, where the 787 is the aircraft of the future. It has a 25% trip cost advantage over the 777-300ER," Mr Joyce said.

When remarks have been made about how Qantas should have ordered the 777, what is actually implied is the aircraft's capability. And what is meant by comments that Qantas should have ordered the 777 is that Qantas needs an efficient medium/high capacity aircraft – yet that is exactly the role the 787 will fulfill, with the early -8 variant overlapping with the 777-200ER.

Qantas was a major purchaser of the 787 – with all the bargaining economics that would have delivered – but no-one expected such a lengthy delay in deliveries. The issue of the lack of the 777 has come to a head because those 787 delays have left a gap in Qantas' fleet, but a similar issue is replicated at airlines throughout the world. Few airlines sufficiently shielded themselves from 787 delays; exceptions are a handful of carriers that ordered 767s or refurbished older aircraft. It is an understandable outcome: each delay was incremental, pushing first delivery off but never enough in one delay announcement to warrant a significant change in strategy.

The world has changed around Qantas and the carrier, being at the end of the line, is increasingly challenged, as is its neighbour Air New Zealand. Destinations and aircraft types are not the silver bullet to reverse these developments; whatever city or aircraft you have, your competitor can have too. Qantas is unique, not just as an end of line carrier, but for its Jetstar LCC that has captured growth in a strong market and, internationally, helped feed passengers back into Qantas' traditional market.

Another solution is to work with who you can engage partners, now the cornerstone of Virgin Australia's international strategy. The latest development is commentary from Emirates that it would be open to partnering with Qantas, but this may become controversial as oneworld, led by IAG CEO Willie Walsh, sizes up one of Emirates' competitors – likely Qatar Airways – for a partnership.

An Emirates relationship would be a hard nosed recognition of how the world has changed in the past few years but it will still be no silver bullet.

Meanwhile, the prospect of Europe-Australia non-stops seems destined to remain a conversation piece for pilot blogs rather than a medium-term reality.