But now those slots have become scarce, requiring Chinese carriers to seek out new markets – North America and Southeast Asia are the current targets – and also improve yield mix.

The task is formidable. The carriers' rapid growth last decade also involved increasing their international capacity but not necessarily their international experience and marketing, leading to a product and service that may be adequate but unknown or untrusted.

Channels for yield growth are many: Air China's revenue from Star Alliance is 4% and from premium classes about 13%, and many foreign carriers are willing partners. But the required experience from Chinese carriers to take advantage of these streams is not as strong as it is in direct capacity growth. China's carriers will soon discover their business is about more than putting aircraft into the sky.

Travel to, from and within China remains heavily leisure, with corresponding impacts on revenue. Air China's passenger revenue from premium cabins has grown from about 11.5% in 2009 to just over 13% in 2012. Comparative figures are few – most airlines do not disclose them – but there are some examples: Thai Airways makes about 23% of revenue from premium cabins, which comprise about a third of Cathay Pacific's revenue in ordinary years (during the global financial crisis this dipped to 20%). There are caveats: Air China has a smaller long-haul network than most airlines use to drive premium traffic. It also has fewer premium seats. And those premium seats are in a state of flux at least at China Southern, which may decrease or remove first class as a response to weaken demand that may only get worse with the government's new austerity measures. In Mar-2013 the CAAC said premium domestic traffic was down 10% so far for the year compared to 2012 despite an overall increase in passengers. It remains to be seen if this is a long-term trend or a short-term move to bolster the government's image. 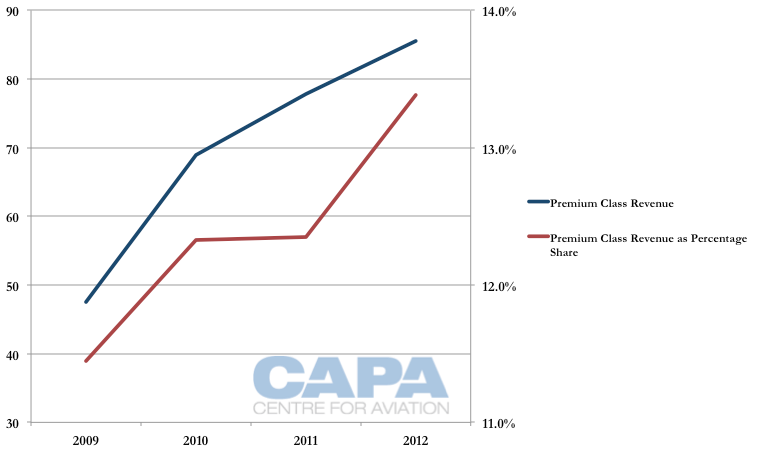 Work is needed. The Big Three in China are becoming known for heavily discounted sixth freedom fares, especially from China Southern, which has offered Australia-Europe return fares with taxes for USD1,100 in economy as well as Seoul-Los Angeles fares, via Guangzhou, in business class for a startling USD2,100 – a mere double the cost of economy. In the domestic market, which comprised the majority of their capacity, domestic first class when booked in advance can be almost the same or just slightly more than economy. Other times it can be only USD100 more – this on tickets that already cost a few hundred dollars. Hainan Airlines, perhaps ambitiously, has put a sub-fleet of A330s in an all-premium configuration into the domestic market.

Partnerships can also increase yield and yield mix. For now, China's carriers are largely tied to partnerships from the global marketing alliances they belong to. Air China has seen revenue from Star Alliance increase as an absolute number as well as share, about doubling from 2% in 2009 to 4% in 2012. 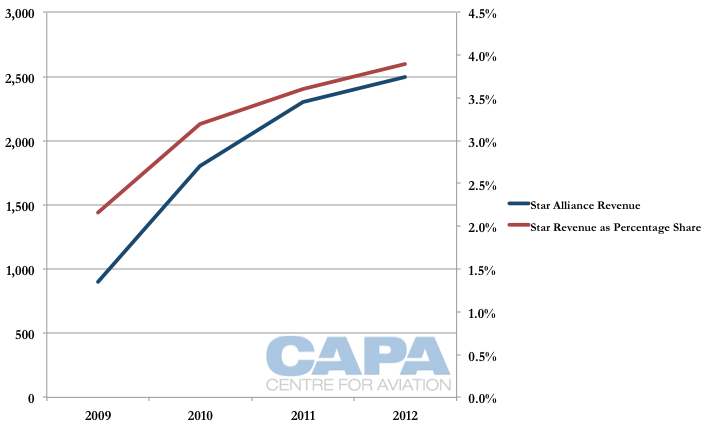 This is no Etihad Airways, which in 2012 reported revenue from partner airlines amounted to a 20% share, or about USD600 million. Virgin Australia, also much smaller than Air China, China Eastern or China Southern, is working to increase codeshare and interline revenue by AUD150 million (USD156 million) per annum by the end of 2015. Neither Etihad nor Virgin Australia belong to a global alliance, making an exact comparison difficult but, as with premium revenue, there are growth opportunities. Air China may represent the state of the ship numerically, but strategically its peers are in the same position.

Air China has a strategic partnership and equity swap with Cathay Pacific, but the strategic side is young. There is little alignment besides a partnership on Hong Kong-mainland China routes. China Eastern and China Southern have various joint ventures with SkyTeam partner Air France-KLM. China Southern has mooted, perhaps to draw attention to, anti-trust immunity with Delta (also in SkyTeam) in order to facilitate open skies liberalisation with the US, but the US works in reverse: open skies is needed before ATI.

The need for changes in yield come not just because of the usual confluence of rising costs and greater competition, but because the Chinese carriers for most of the last decade saw primarily revenue growth through double-digit capacity expansion (on their own – excluding virtual). 20%, even 30% and 40% growth figures were common. 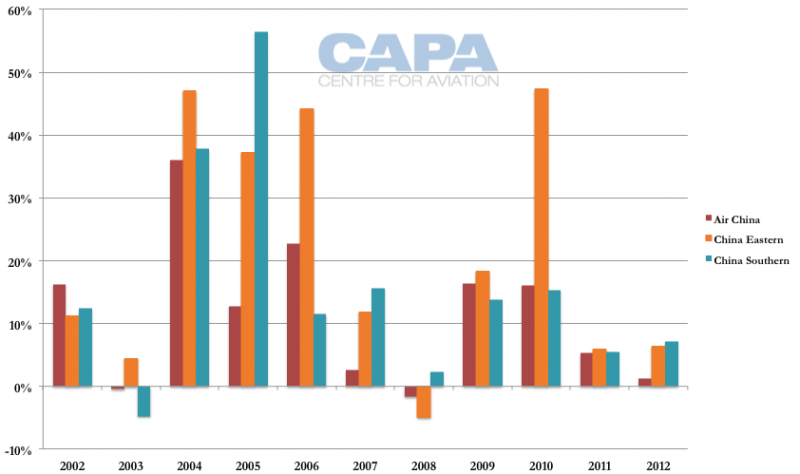 International product and service standards are improving but still unknown

The Big Three are painfully aware of the need to improve yields, especially internationally, which typically has the lowest yields of their three defined markets: domestic, regional to Hong Kong, Macau and Taiwan and finally international. International services do skew yields and costs due to their more efficient nature allowing for lower unit costs and subsequently lower yields. But the discrepancy between yields at the Big Three is high to the point international is typically loss making.

There can be poor public perception of Chinese carriers' hard and soft service. On the hard product side, each new generation of aircraft coming into China represents an improvement. Air China's 777-300ERs and China Southern's A380s have top-end hard products. Soft product is still catching up, and the Chinese carriers are surprisingly frank given the saccharine bent official discussion on matters tends to be. CEOs acknowledge shortcomings, and this seems to have trickled down to passengers, who do not expect the world but perhaps leave slightly surprised – and certainly pleased with the fare they typically paid.

International marketing can lag. China Southern is sponsoring high profile events, especially in the Australian market it has set its sights on, although this is often with the help of tourism bodies, thankful for the influx of high-spending passengers the carrier brings. But even where marketing is present, it does not always convey the same message as experienced peers like Cathay and Singapore Airlines. Nor is it widespread enough to shift overall public perception – and their willingness to pay for more reasonable fares – that the Chinese carriers have made leaps and bounds in recent years.

Outside of the product arena, constructing sixth freedom itineraries and the necessary hub support – relatively new functions – has been helped along by partners, including KLM, no stranger to sixth freedom traffic with over 70% of its passengers connecting.

A further lift will occur this year as China's three major hubs of Beijing, Guangzhou and Shanghai receive permission to allow some foreign nationals to spend up to 72 hours in the city they arrive in before continuing on another international service. This fulfils passenger ambitions for a layover en route, as well as national tourism goals.

North America and Southeast Asia are this year's growth targets

The international focus in 2013 so far looks to be North America and Southeast Asia. North America is performing well, both in comparison to 2011 as well as to the dire situation in Europe. Air China is increasing capacity at Los Angeles, New York and Vancouver. China Southern is still digesting the 78% increase in capacity it placed into Los Angeles in Oct-2012 with its A380 replacing the 777-200. Vancouver will also see increases. China Eastern – limited on long-haul aircraft until late 2014 – will launch Shanghai-San Francisco services after a considerable absence, and also look to make incremental increases to New York service by having better utilisation of its constrained ultra-long-haul fleet, A340-600s, of which it has five. Additional growth may come depending on how China Southern's pending A380 cooperation with Air China works out, as well as destinations for forthcoming 787s to be delivered this year.

Southeast Asia has been a mixed experience for airlines with routes sometimes unprofitable due to Southeast Asian LCCs, a testament to the efficiency of those carriers and the bloated state-owned carriers that have accumulated legacy salaries as well as government-orchestrated mergers. (Remuneration is a significant cost creep concern for China's carriers, which are reporting low double-digit percentage increases, due mainly to higher salaries but also increases in head count.) The Chinese carriers do, however, have the backing of their network. China Eastern is expanding Southeast Asian flights from its hub at Kunming, which only sees LCC service from Thai AirAsia, while private carriers Juneyao and Spring look to add services to Southeast Asia, and Thailand in particular, for their loyal following from Shanghai. Southeast Asia is an opportunity but also an expansion out of necessity as Northeast Asia presents few opportunities with limited points in Korea (as well as no open skies from all of China) and the political situation between China and Japan keeps traffic levels between those two nations depressed after recent encouraging growth.

Taiwan is a hot spot and Chinese carriers are eager to expand services but the market is heavily regulated with restrictions not only on weekly services but also on which airline can fly which city pairs. Expansion has recently been between less profitable third- and fourth-tier cities. That, along with added capacity, is showing some signs of yield pressure. While the Chinese side may pursue open skies, Taiwan is hesitant, fearing the result of a massive influx of large Chinese carriers against its comparatively smaller three carriers. A new alliance between the SkyTeam carriers in China and Taiwan poses intrigue, but it remains to be seen how it gives scale once implemented and what the revenue benefits are.

Central and western China are home to the fastest growth

At home in the domestic market, the carriers are growing mainly in the central and western regions, a result of the higher economic growth there, but also Beijing and Shanghai airports being becoming severely slot constrained. Beijing is creating incremental slot growth as the air traffic corridors open, and Shanghai will see an increase in slots with the completion of the fourth runway at the end of this year. But once those are divvied up, the growth – certainly welcome – will not be huge. Even Kunming and Hangzhou, non-first-tier cities, are facing slot restrictions. The northeast is also seeing high growth as the former industrial region undergoes a revival.

Urumqi is serving as gateway to Russia/CIS/West Asia while Chongqing (with Chengdu) are the centres of China's Go West campaign to encourage economic growth in the region (the two cities are also seeing notable increases in international long-haul flights).

Zhengzhou is growing thanks to its manufacturing of consumer electronics (one Chinese executive referred to the city simply as where Apple manufactures half of the world's iPhones). It is also seeing significant freight growth.

Tapping the growth is only the first step: Yields and revenue growth will require innovation as the major airlines evolve

These cities and regions represent untapped growth opportunities, and while Chinese carriers know how to grow direct capacity, it is their development of revenue and innovation that will increasingly be the topics to watch.

With China's population of 1.3 billion, it is only a matter of time before globally innovative air transport measures emerge from the region and spread globally. One area of change may well be in imposing new paradigms in airline ownership and control, as foreign governments seek to attract the enormous volumes of traffic now emerging from China. In turn this will reshape the nature of airline ownership and of partnerships.

No doubt China's airlines will progressively be seeking to improve fundamental conditions for their profitability, but for short term the focus will be on importing the decades of best practice experience that currently only resides in its international competitors - and partners.