China started 2015 with five of its airlines flying long haul. By the end of the year, the number will be seven – the same number of airlines across all of North America that fly long haul. Following Xiamen Airlines' 787 services to Amsterdam and Sydney, HNA's Beijing Capital Airlines plans to open services to Europe in Sep-2015. Limited Copenhagen service is planned to be served from Hangzhou and Beijing while Helsinki will be served from Beijing only. Capital Airlines' 54 Airbus narrowbody aircraft will reportedly be joined by three A330s by the end of the year. More international flying – and domestic services – can be expected to make efficient use of the new widebody fleet.

Capital Airlines has a mixture of scheduled and charter services. Under HNA's complex ownership structure, Capital Airlines is part of HNA Tourism, which could generate group benefits from Capital Airlines' expected quasi-charter flights. Most other HNA-affiliated carriers – from Hainan Airlines to West Air to Aigle Azur – are under HNA Aviation. While flagship group carrier Hainan Airlines focuses on North American flying with 787s, Capital Airlines could be used to explore other markets and ultimately be a test case for long-haul service from other mainland HNA carriers, of which there are many.

Beijing Capital Airlines filed an application on 02-Jun-2015 with regulator CAAC to open one weekly Hangzhou-Copenhagen service on 03-Sep-2015 and one weekly Beijing-Copenhagen service on 06-Sep-2015. Both are planned to be served with an A330. After the application, WCARN reported Capital Airlines would also launch Beijing-Helsinki service by the end of the year and the airline would acquire three A330s (variant unspecified) by the end of 2015. These will be the first widebody aircraft for the airline. 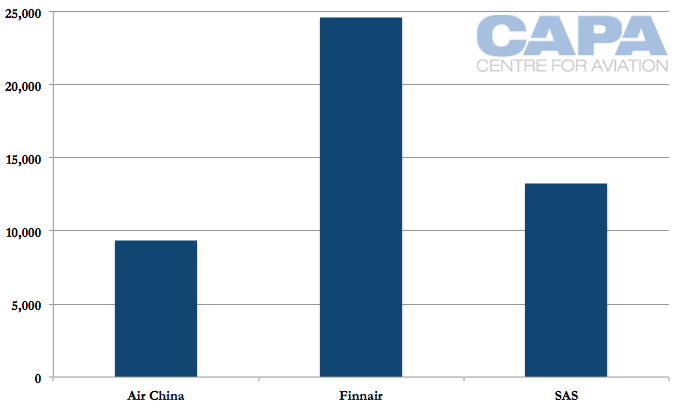 Air China in 2011 planned to open in Jun-2012 four weekly A330 services between Beijing and Copenhagen but the flights never eventuated and the inauguration was cancelled in Feb-2012. It is understood Air China was unable to cement a partnership with SAS, and still holds authority for the Beijing-Copenhagen service. However, by the time CAAC applications are made public they are often all but finalised, so there is still a chance Air China could object and even open Beijing-Copenhagen service.

Copenhagen was the 13th largest European destination from China in 2014 based on O&D demand, according to OAG Traffic Analyser. Copenhagen is also the largest un-served market from China. Of the top 20 European markets from China in 2014, there is service to markets smaller than Copenhagen such as Brussels and Geneva. (Helsinki does not rank in OAG's top 20.) Other unserved markets include Manchester, which has been courting Chinese carriers although it received service from Cathay Pacific, which can pull traffic from around China.

It is understood Beijing Capital Airlines will be testing these markets, and if successful could look to grow the market, including by having year-round service. Unlike other airlines affiliated with the expansive HNA group, HNA says Beijing Capital Airlines is owned under HNA Tourism as opposed to HNA Aviation. HNA Tourism's companies as well as external travel agencies can help sell what is otherwise an initially small flight network. As with most Chinese airlines' long-haul flights, there will be significantly stronger outbound than inbound demand. Chinese carriers have an advantage over European or other Asian peers in that Russia generally does not charge them overflight fees.

Despite what its name suggests, Beijing is not the largest market for Beijing Capital Airlines, according to OAG data. Rather Sanya, Hangzhou, Xi'an and Haikou are the largest markets. Beijing Capital Airlines will have some feed at Hangzhou, although the city also boasts a wealthy catchment area. Likewise for Beijing, where local traffic can be supplemented with connections from Hainan Airlines. Future growth is most likely at Beijing and Hangzhou, and possibly other airports if incentives are strong enough. 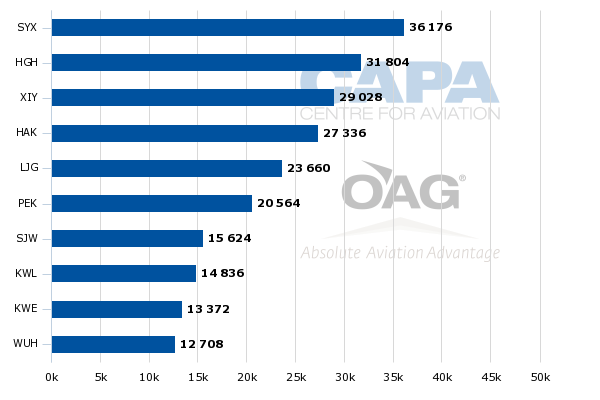 There is likely regulatory support for further Chinese growth in Scandinavia. The CAAC likes to see some attempt at balance between Chinese and foreign airlines. SAS and more recently Finnair have sought to exploit their northern geography to offer the quickest connections between Europe and Asia (and north Asia in particular).

Although connections beyond Scandinavia are critical to SAS and Finnair, there is nonetheless a perceived imbalance of foreign carriers having more flights to China from Scandinavia than Chinese carriers to Scandinavia. Finnair has added service to secondary Chinese cities of Chongqing and Xi'an while SAS is once again growing in Asia with a new flight to Hong Kong. For both, however, financial success is proving elusive. 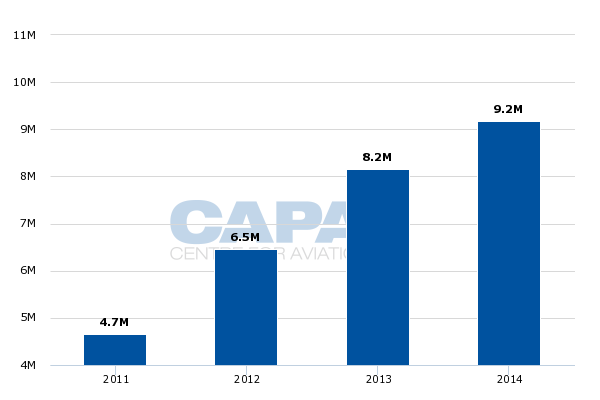 Source: CAPA Fleet Database
Orders include those placed directly by the operator and by lessors assigned to the operator, from 6-Jun-2015 onwards. 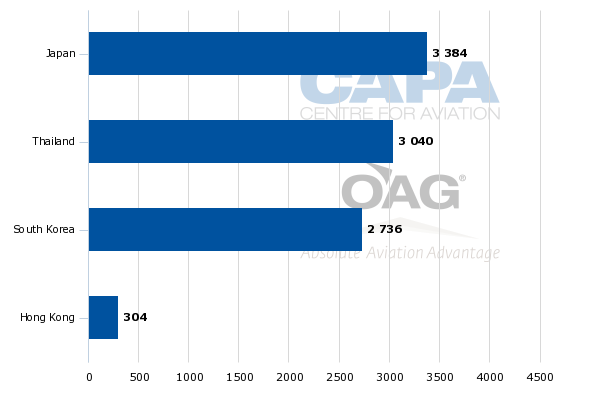 HNA had planned for Aigle Azur to fly long haul. HNA acquired a stake in France's Aigle Azur with hopes of giving the carrier A330s to open a Paris-Beijing route, which Hainan Airlines could not do since Air China already flew the route. However a series of issues saw that plan cancelled. HNA's newest acquisition is South Africa's Comair, but it appears very unlikely Comair will be used to fly long-haul.

Hainan Airlines has long haul service concentrated on Europe and North America with the latter seeing rapid growth. Hainan's focus on North America may allow other HNA units to explore less important markets. Europe is attractive as it can be reached with A330s - whereas North America needs 787s for most points. 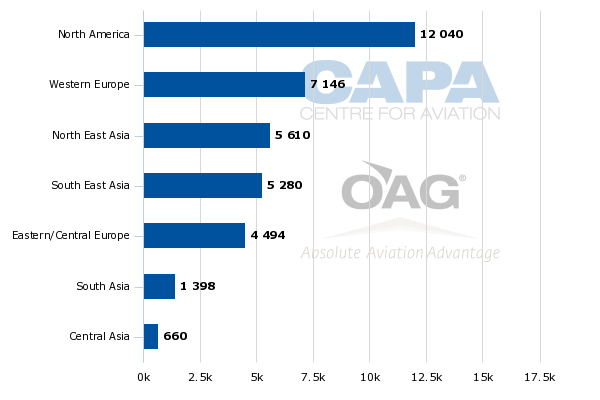 Seven mainland Chinese airlines will be flying long haul, only half with a major presence

Air China, as the country's flagship, is unsurprisingly the largest long haul carrier with about 8,700 daily seats in Aug-2015, followed by China Southern (5,500) and then China Eastern (4,400). Hainan's long haul network (2,200) is half the size of China Eastern's and a quarter the size of Air China's, according to OAG data for Aug-2015 schedules. Some flights Chinese carriers will likely operate in Aug-2015 have not yet been put in schedules and are not reflected on the graph below. 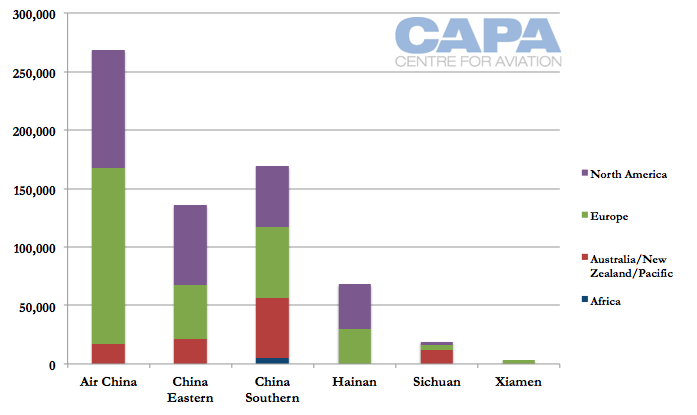 Sichuan Airlines commenced long-haul services in 2012, so after a few years of little change to the status quo, 2015 is busy with Xiamen Airlines and Beijing Capital Airlines starting long-haul services. Seven airlines is a lot for one country to have flying long-haul, and chances are the number of Chinese airlines could easily double or triple – with the condition that much depends on what consolidation one days comes to Chinese aviation. Due to local politics and incentives, it is in airlines' interests to have multiple licenses and brands, but the efficiencies of consolidation make that activity probably inevitable.

Spring Airlines has studied long-haul services but this does not appear to be an immediate priority. Shandong Airlines, partially owned by Air China, says it plans to commence long-haul services to Australia, Europe and North America by 2020. In May-2015 the South Australian state government disclosed it was talking to the Shandong government and Shandong Airlines about plans to charter an aircraft for services to Adelaide in Jun/Sep-2016.

What is certain is that the ambitions of Chinese carriers to fly long haul will be greater than regulator CAAC's willingness to let them expand. The CAAC wants to see airlines demonstrate domestic and then regional international success before embarking on long haul flights, part of the "going out" process.

Competitors will seek to limit new entrants to long haul routes, creating some urgency for airlines to fly beyond China's borders sooner rather than later, although commercially many of these services will be some time away from sustainability.