Hainan Airlines' decision to order 30 787-9s for delivery by 2021 will see Hainan narrow the international/widebody gap it has with China's three main state-owned airlines. Hainan has the fourth most number of passenger widebody aircraft in China (29) after Air China (83), China Eastern (59) and China Southern (57). The 787-9s, which supplement an earlier order for 10 smaller 787-8s, will take Hainan's disclosed commitment for future widebody aircraft to 37, ahead of Air China (32), China Eastern (20) and China Southern (13).

Many or even most of the 787-9s can be expected to be used on trans-pacific routes, Hainan's core long-haul segment and a market that is growing rapidly. The larger 787-9 not only allows Hainan to carry more passengers but decreases unit costs, critical as Hainan still needs to build yield strength. The order is still probably conservative and Hainan could have more growth – if Beijing allowed.

With more long-haul growth, Hainan will need to turn to partnerships. After Emirates and Alaska Airlines, Hainan is the largest full-service airline not part of a global alliance.

It is currently the fifth largest airline in China based on domestic seat capacity. Based on international seats, Hainan is the 24th largest carrier to/from mainland China (including foreign carriers) and is the 10th largest Chinese carrier. Hainan is behind carriers like Spring and Juneyao that are smaller domestically but have made a regional international push.

Hainan is different from China's big 3 – Air China, China Eastern and China Southern – in that short-haul regional Asia capacity does not account for the bulk of international seats. North America is Hainan's largest international market, currently accounting for a 31% share of seat capacity.

As Hainan grows further in North America over northern summer 2015, North America's share will increase to 38%. North and Southeast Asia account for only 39% of Hainan's international seat capacity compared to 80% for China Eastern, 62% for Air China and 68% for China Southern. 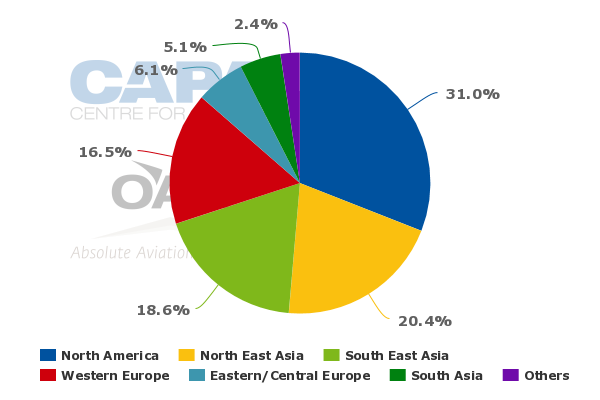 Hainan will be unique in China for having more widebody aircraft on order than in service, or at least for now. Airframers can effectively reserve delivery positions for Chinese carriers, whose government approval process for new aircraft can be tedious and often according to government and not market timetables.

Widebody aircraft in service/on order at mainland Chinese airlines: as of 30-Mar-2015

Hainan has many sister carriers in the HNA group. Collectively these airlines boost HNA's share of the domestic market, but individually synergies and partnerships between the carriers are limited.

Widebody aircraft are used domestically in China, some in between long-haul flying and other aircraft exclusively serving the domestic market. About 70% of Hainan's widebody ASKs are on international routes. This compares to 78% for Air China, 82% for China Eastern and 75% for China Southern, according to OAG data. So Hainan's widebody fleet is about balanced with peers in terms of domestic/international splits, although peers have widebody short-haul international flying (such as to Japan, Taiwan and Hong Kong).

Hainan 787-9s can be expected to serve North America

Hainan's long-haul markets include Europe and from later in 2015, Tel Aviv. Past forays have included Angola.

But it is North America where Hainan's strongest long-haul opportunities are. The trans-pacific market is not as fragmented as to Europe and growth prospects are high. 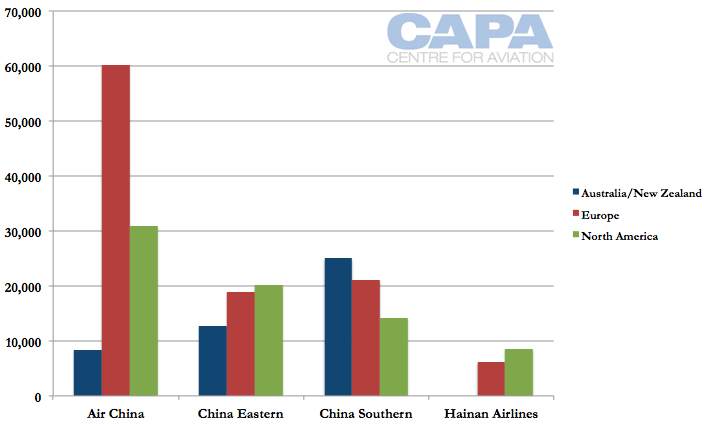 These are Hainan's first long-haul routes from Shanghai. Beijing-Seattle had been served with 787s, but with the North America expansion will revert to A330s, which can reach Seattle. This shows how Hainan's 787/North America network is stretched. (Europe and elsewhere are not, as seen with the new Beijing-Tel Aviv as well as Chongqing-Rome routes.)

Services to the US east coast could especially benefit from the 787-9. Hainan's 787 fleet serves North America and domestic China flights. In the peak northern summer, a Hainan 787s will on average operate about three roundtrips a week between China and North America in addition to domestic flying.

Another 30 787s obviously correlates to much expansion. The exact figure of course depends on net growth versus any replacement and how much domestic flying is done and how much non-North American international flying the 787-9s do. Conservatively, Hainan would be looking to triple its position in North America.

Hainan is based at Beijing (but named after Hainan province in the far south of China) and has to compete with Air China. Air China is not just a government-owned carrier but the flagship and enjoys associated privileges.

China generally has a rule that long-haul routes can only be operated by one Chinese airline, so Air China's existing presence on key North American markets is a hurdle for Hainan. Hainan has had to select alternative destinations, but was fortunate Air China overlooked Chicago, a blue chip destination.

There has been no liberalisation yet in the international route restriction, but some must surely come by the time Hainan receives its last 787-9 in 2021. One exception to the international route restriction has been the trading of routes, namely the CAAC allowing Hainan access for Beijing-New York JFK in exchange for an Africa route strategically important for China but likely to be loss-making. This is leniency with a big condition attached.

Nearly every carrier in the China-North America market is making significant capacity increases in 2015. Hainan will be about 50% larger than in the peak 2014 season, and triple its size from the peak 2014 season. Hainan will remain the smallest major carrier in the China-North America market with about 8,700 weekly seats in the peak northern summer 2015 season (Sichuan Airlines and Hawaiian Airlines will have a very small presence).

To put the trans-pacific growth in perspective, Hainan in mid-2015 will be the same size China Eastern was two years prior, and will be larger than Delta and American Airlines were only a year ago. Where Hainan once trailed Delta, American Airlines, and Air Canada, it is now within 1,000 weekly seats of them. 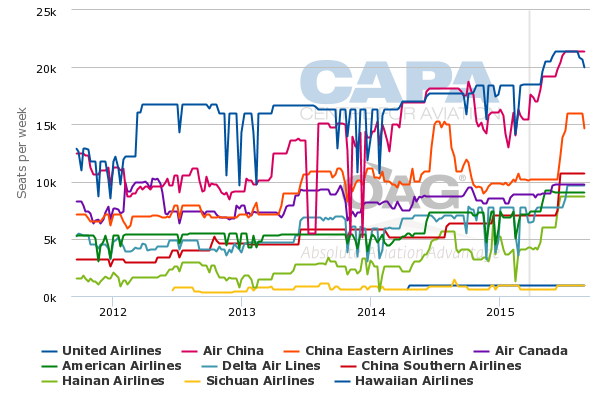 To put the larger Asia-North America growth in perspective, the North Atlantic to Europe market is the largest long-haul segment for North American airlines. But it is the Pacific to Asia routes that growth opportunities are the largest.

Hainan's 787-9 order signals its intent to grow operationally but also financially; secondary routes can come with a yield trade-off and the 787-9 promises lower unit costs. This is important for Hainan. It wants to see capacity growth but also stronger financial returns. Load factors are solid but these do not necessarily correlate to financial performance.

Better unit costs will help Hainan, but so too would partnerships. After Emirates and Alaska Airlines, Hainan is the largest full-service airline that is not a member of a global alliance.

Emirates is adamant about remaining independent (it has the scale to do so and can look for specific market partnerships, like Qantas and TAAG) while Alaska Airlines does not fly long-haul but has a number of domestic and international partnerships. So that effectively makes Hainan's the largest full-service airline that could be a candidate for a global alliance. (On overall seats, Hainan is even larger than Etihad.)

The China alliance question is an old discussion. It is oneworld that lacks a Chinese carrier, although it may be making new efforts to woo an existing carrier. Hainan had been an obvious choice, but the main Chinese carriers would have lobbied to keep Hainan out of an alliance. oneworld's Cathay Pacific likes to think it can be the alliance's answer for mainland China (which inherently bolsters its proposition and opportunities) but both American Airlines and British Airways have been open about needing a mainland partner.

American has that with Hainan (BA does not) and it is likewise to Hainan's benefit, although the partnership is limited. It is a codeshare on trans-pacific flights and behind gateway services. There is scope for more.

Air China and United have a loose affiliation. Delta is working more closely with China Eastern, including a recent co-location in Shanghai Pudong for easier connections. The relationship does have some apprehension, such as Delta worrying China Eastern might grow at its expense. Air China and Air Canada are forming a JV, but US-China JVs will require open skies, which does not exist (yet) between China and the US.

As CAPA stated in a recent analysis report: "The Pacific is witness both to some of the strongest partnerships (JVs in Japan) and the sourest relations (Delta-Korean Air). But overall, Asian-American partnerships are in their infancy."

There is much scope for Hainan, and a degree of necessity. It is competing in a large market with sizeable capacity but is relatively alone. Sister HNA carrier Hong Kong Airlines' planned resumption of long-haul services later this decade is an easy pick for closer cooperation, but the two could do with more friends, across the Pacific and in other markets.

Hainan has been a quiet achiever with relatively large accomplishments despite the restrictions effectively placed on it for being a private carrier. Hainan may not be allowed to out-size, out-route or out-aircraft its state-owned competitors, but it can certainly try to out-smart them. Securing partnerships will help its present position and be critical as it grows in the future.

Once liberalisation occurs, Hainan and its partners could be ready for much more. Alternatively, liberalisation in what will be the world's largest market could bring a change to partnerships.