What is certain is that Hainan is unlikely to open all of those routes. Hainan does not have the fleet to open so many new routes. But Hainan is likely to continue to quietly build a long-haul network, anchored around the 787 to North America, despite the difficult environment it operates in.

Hainan has reportedly previously been approved for Beijing-New York JFK service in exchange for opening a route to Africa on which China places strategic importance but which other carriers do not want to launch. Routes to Los Angeles and San Francisco are from secondary Chinese cities that may be allowed by regulators, and with incentives, but difficult to sustain commercially. Other services may be even more difficult, be it due to lack of demand, restrictive visa policies for Chinese nationals or needing to acquire London Heathrow slots.

Hainan Airlines is expected to propose to the Chinese government permission to operate nine new long-haul routes in 2015, according to a local report from WCARN. It is exceptionally difficult to see Hainan launch so many new long-haul routes, and some may not even receive approval. The routes that Hainan does launch would have difficulty being sustainable.

Hainan may receive approval for some routes it does not intend to operate but will keep the route authority. Even with these qualifications, Hainan's wish list is reflective of the state of long-haul traffic from China.

Of Hainan's nine supposed new route proposals, five are to North America, two to Europe and one each to the Middle East and Africa. This reflects the bullish view Chinese airlines have of North America, where demand and growth are seen as high while competitors are fewer than in the China-Europe market.

North America is Hainan's largest international network, with the carrier having carved a quiet but niche network with 787s. This is despite the number of restrictions Hainan faces, and the restrictions have defined its wish list.

China's "one route, one airline" policy generally means each long-haul route can be served by only one Chinese carrier. Hainan's main base of Beijing is home to Air China.

This has a double impact on Hainan. First, Air China has carved an extensive long-haul network, generally prohibiting Hainan from serving the long-haul routes operated by Air China. Second, Air China is the flag carrier and receives heavy government support, meaning it is unlikely for Hainan (a privately-owned airline) to sidestep Air China, whereas in other markets Chinese carriers are sometimes permitted to infringe on the locally domiciled one.

Of Hainan's five reportedly proposed North American routes, only one – Beijing-New York – is between two primary cities; the other four are between a primary and secondary city. Hainan for some time had been trying to open a Beijing-New York route (served by Air China) and reportedly received approval but only if it also opened a service to Africa.

Hainan previously served Angola via Abu Dhabi while China Southern has run charters to Mauritius (a holiday destination) and reportedly planned in 2014 to open fights to East Africa, although these have not materialised. An African route would be difficult for Chinese carriers given their lack of premium traffic to feed the service from Asia, or connecting markets beyond their African destination. Further, Chinese carriers often focus on attention-getting destinations in Europe, North America and Australia.

The other four proposed routes cover service from Beijing to two secondary points (Montreal and Oakland). Oakland may be considered (with lobbying from Air China) to be too close to San Francisco, which Air China serves. There are also two proposed routes from secondary Chinese points (Nanjing and Hangzhou) to primary North American points (Los Angeles and San Francisco). Both Nanjing and Hangzhou are nearby to Shanghai (Hangzhou about 90 minutes) and form part of Shanghai's catchment area.

High-speed rail links Shanghai to Nanjing and Hangzhou. Nanjing and Hangzhou have large populations in their own right, although demand is smaller than from Shanghai. Hainan of course could look to attain traffic from the greater Shanghai area, as well as use its presence at Hangzhou to feed the route from around China. Hangzhou is Hainan's eighth largest hub.

The Nanjing-San Francisco route is interesting as it would link the university cluster around Nanjing with the universities around San Francisco. Both cities feature universities specialising in the sciences. (Hainan has made a point of promoting its Beijing-Boston service as connecting China with the prestigious universities in Boston that are preferred for Chinese students.)

However, as with most proposed routes, securing premium traffic would be challenging. 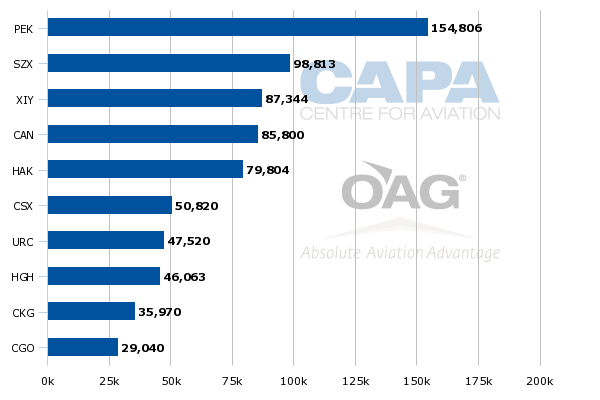 It is exceptionally difficult to see Hainan awarded the right to fly Beijing-London Heathrow. The route is important for Air China and Hainan may not be able to receive authority unless it opens another "trade-off" route that China has identified as a strategic priority. Further, Hainan would need to obtain London Heathrow slots.

It is difficult but not impossible to see a Manchester service. China Southern in northern summer 2014 had charters to Birmingham, making the UK city the first non-London airport to receive non-stop Chinese flights. But these flights were exceptionally limited in number.

Hainan could try to feed from Hong Kong but has no flights to Australia. Hainan, like other Chinese carriers, will have challenges attaining premium traffic. Further, local Chinese demand to the UK is hampered by the UK's unfavourable visa policies for mainland China. These are negatively impacting British Airways' Chengdu-London Heathrow service, which has a higher reliance on the ex-China market than BA's Beijing or Shanghai flights.

The proposed Tel Aviv service is a left-field proposal. Israel has growing trade and involvement in pharmaceutical and technology sectors, and has limited service from Asia. But Tel Aviv proposal may be another to have Chinese carriers balance foreign carriers; no Chinese carrier serves Israel while El Al serves Beijing.

Hainan Airlines, even if it received approval for all routes and wanted to launch them, is unlikely to be able to open them given its limited fleet. Hainan's two remaining 787s on order are expected to be delivered in 2015 while its A330s on order are projected to commence delivery in 2017. It is difficult to see Hainan source enough additional aircraft to launch so many routes, besides the logistical, commercial and regulatory constraints involved in nine new long-haul services.

Source: CAPA Fleet Database
Note: *Firm orders include those placed directly by the operator and by lessors assigned to the operator

18% of Hainan's ASKs are in the international market, most on long-haul flights

About 5% of Hainan Airlines' seats and 18% of ASKs are operated in the international (including Hong Kong/Macau and Taiwan) market.

About 48% of Hainan's international seats are to Western Europe and North America, a difference from the main Chinese airlines, which typically have more short-haul regional seats than long-haul. (This is unlikely to be an advantage; regional flights, especially to North Asia, are highly profitable.) 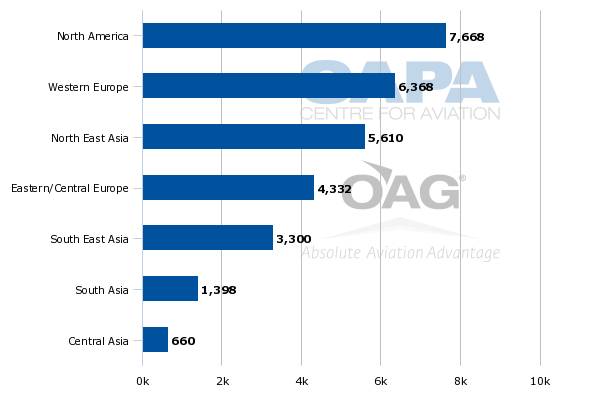 North America is Hainan's single largest region while the United States is its second-largest market after Taiwan. 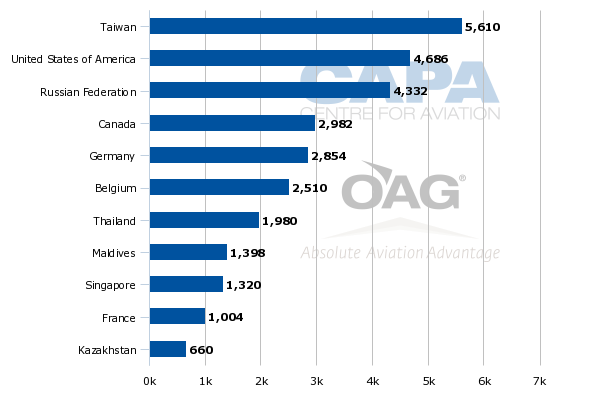 Hainan is likely to launch a few new long-haul routes next year, but not all nine, or close to nine. It would be sensible to increase frequency on existing long-haul services (which are seldom daily), but foregoing a new route launch could mean the authority is awarded to another airline. So within the framework of Hainan's environment, it could make sense to go for a wide network rather than a concentrated one.

Seldom is there commercial justification for secondary routes. But for Hainan, which takes a very long-term view and does not need to answer to quarterly performance questions, the development path can be longer. Wang Yingming, the executive chairman and executive president of Hainan's parent company HNA Aviation, remarked to China Daily in Jun-2014 that Chinese airlines need to move fast because of competitive pressures. Mr Wang said Hainan wants to double its passenger volume from the international market, although no target date was given.

Hainan has also mooted ordering more 787s to further its long-haul growth in terms of destinations and frequency. The opaque and closed environment Hainan operates in is not ideal, but given the conditions, Hainan has done well. Further network expansion in 2015, even if well short of the nine proposed long-haul routes, will continue Hainan's growth trajectory.