AirAsia X has received final clearance to move its five weekly flights from Tianjin to more centrally located Beijing Capital International Airport, only 30km from the city compared to 80km at Tianjin. The move from Tianjin, considered an alternative airport to Beijing Capital, leaves Scoot as the sole foreign LCC at Tianjin. When the move is made on 22-Jun-2012, AirAsia X will join fellow low-cost, long-haul competitor Jetstar at Beijing.

The move raises the matter if it is in a carrier's financial interest to serve a cheaper yet less convenient airport but possibly forgo revenue by alienating some passengers and reducing options for connectivity, which is increasingly becoming common as carriers pursue hybrid paths. Demand in the region is still relatively strong, eliminating the need to incentivise the market by passing on savings from alternative airports. What the region's LCCs do want are low-cost terminals, which Tokyo Narita and Melbourne Tullamarine will soon offer, while Kuala Lumpur and Singapore Changi will construct new ones.

Beijing capital always a target for AirAsia X, before and after MAS share swap

AirAsia X had always been interested in serving Beijing Capital but due to restrictions from the Malaysian Government, which wanted to protect national carrier Malaysia Airlines (MAS), AirAsia X was blocked from Beijing, as well as other airports including Shanghai and Sydney. The Malaysian Government in Jun-2011 said it would end those restrictions but final network approvals took considerable time; AirAsia X launched its Sydney service in Apr-2012.

Dovetailing with AirAsia X's network intentions has been the share swap, since cancelled, between MAS and AirAsia, which also involved AirAsia X. The two intended to cooperate in certain areas under the original Aug-2011 agreement and since the reversal have agreed to continue the cooperation.

The share swap had raised the matter if AirAsia X would still pursue serving primary airports or would concentrate on alternative airports to avoid any possible cannibalisation of MAS' routes, especially since MAS this year introduced a second daily Kuala Lumpur-Beijing service as part of its turnaround strategy. But MAS and AirAsia X have been running their own course. In the under-served Kuala Lumpur-Beijing market (Air China, the only other current carrier, will have a four times weekly Boeing 757 service in summer 2012) there is room for MAS and AirAsia X to both operate, especially given different market segmentation. 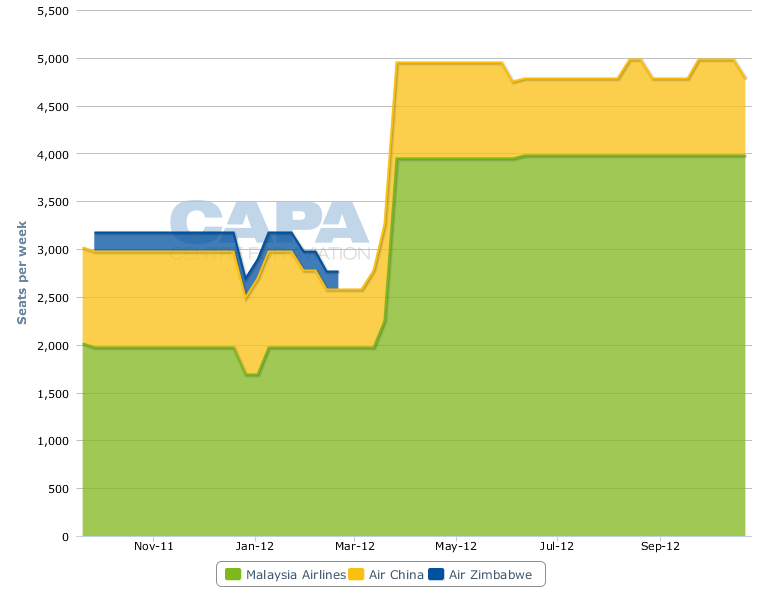 Note: Excludes AirAsia X as schedules not yet loaded

Lack of slots at Beijing a stumbling block for carriers

The Kuala Lumpur-Beijing market will likely be further segmented based on schedules. Beijing Capital is running at capacity during peak hours and daytime slots have for some time been difficult to obtain. Jetstar's Singapore-Beijing flight, which commenced in Nov-2011, arrives at Beijing at 01:00 and departs at 02:10. While AirAsia X has not yet released its scheduling information or confirmed the route besides posting a message on Twitter, it is unlikely AirAsia X will fare better with slots, but, like Jetstar, will be of the view that almost any slot at Beijing is better than no slot.

MAS has one service that arrives in Beijing at either 06:35 or 15:15 (depending on the day of the week) while its second daily service is relegated to less than ideal times, arriving in Beijing at 00:20 and departing at 01:30. Foreign carriers which have been adding flights at Beijing, including Singapore Airlines (SIA), have been forced to make do with similar after midnight slots. The current challenges at Beijing are not specific to LCCs.

Tianjin does offer better scheduling opportunities. Scoot, which will launch Tianjin services in Aug-2012, will arrive at Tianjin at 07:30 and depart at 09:00.

Tianjin service, however, needs to be weighed against market opportunities. CEO Azran Osman-Rani, speaking to China Daily, reported the Tianjin route primarily consists of Malaysian and Singaporean nationals. That can give a revenue imbalance and yield disadvantage as the carrier misses the local Chinese mainland market.

AirAsia X's route to Hangzhou, an alternative to Shanghai, was split approximately half-half between China and foreign originating, Mr Osman-Rani said. That performance is indicative of a strong local market in Hangzhou, a tourist centre that despite being close to Shanghai has its own market. The airport plans to triple its 2011 passengers traffic by 2015, reaching 45 million p/a. To put that in perspective, China's second busiest airport, Guangzhou Baiyuan, handled 45 million passengers in 2011.

Scoot as part of its broad strategy wants to target either under-served points or second tier cities that parent company Singapore Airlines does not reach. Its initial long-haul destinations speak to that: Sydney is under-served by LCCs while SIA serves neither the Gold Coast nor Tianjin. Jetstar's parent company Qantas does not serve Beijing, but Qantas is largely confined to an Australian-based network whereas Jetstar has both Australian and multiple Asian bases (its Beijing services are from Singapore), eliminating concerns about network overlap, although Jetstar already overlaps with Qantas on a large portion of its Australia-based network.

With LCCs eager to enter Shanghai but AirAsia X already experiencing good performance to Hangzhou, indicative of a strong local market (in summer 2012 AirAsia X will have a six times weekly service compared to four times weekly to Tianjin), if AirAsia X continues to want to look at primary airports, it could look to supplement Hangzhou with Shanghai rather than replace it as in the Beijing market. But securing slots at Shanghai can be even more difficult than Beijing, where at least off-peak slots seem to be available. Jetstar also now serves Hangzhou from Singapore but has not yet been able to fulfil its goal of also serving the lucrative Singapore-Shanghai route.

With LCCs giving interest to primary airports, it is worth considering the role of alternative or low-cost airports in Asia. The concept, common in Europe, is limited in Asia, explaining the low take-up. But LCCs in the region are showing a liking for low-cost terminals at primary airports, which give the best of both worlds: lower cost operations but also a primary airport's large volumes a LCC can pull from. While simplification had been the mantra of LCCs for a number of years, many – especially in Asia Pacific – are realising that adding complexity can bring disproportionately higher yield benefits.

Jetstar started with having Qantas codeshare on it and expanded that arrangement to members of the oneworld alliance Qantas is in. The most recent addition, in Feb-2012, was of India's Jet Airways. Being co-located with partner carriers facilitates connections.

In the region, the inclination is towards low-cost terminals. Kuala Lumpur and Singapore Changi, which already have LCC terminals, are in the process of constructing new and bigger ones. Melbourne Tullamarine, which currently has a limited facility for LCC Tiger Australia, is planning a larger facility than can also accommodate Jetstar. Both carriers have favoured Tullamarine to farther out dedicated LCC airport Melbourne Avalon.

Tiger in Jun-2011 announced its intention to decrease Avalon services. After resuming operations in Aug-2012 from a six-week grounding, Avalon was not part of its network and remains so. Jetstar had planned to use Avalon more, but after Tiger launched trunk routes from Tullamarine, Jetstar enlarged its operations there.

Tokyo Narita in Apr-2012 affirmed it would open Japan's first LCC terminal – a prospect nearly unimaginable a few years ago prior to many factors, including government reform. Tokyo Narita will be the base of two new LCCs, AirAsia Japan and Jetstar Japan. LCC Peach is based at Osaka Kansai, a traditionally full service airport that has accommodated the LCC by offering remote stand boarding via buses. Ibaraki Airport, further out from Tokyo than even Narita, was intended to be a low-cost alternative but so far sees limited service from only Skymark and Spring Airlines, which collectively average five round-trips per day.

For an airport operator without monopoly control, a LCC terminal is more cost-effective than replicating airport infrastructure for a dedicated LCC airport, which airlines in the region may not prefer. Having a LCC terminal also keeps the competition at bay, as seen in the cases of Melbourne Tullamarine and Tokyo Narita against Melbourne Avalon and Ibaraki. Where there is monopoly control, LCC terminals can be achieved but, as AirAsia is finding, not without significant negotiation, including through the press. Singapore Changi so far is on a smoother path, although its plan does pique interest as it will shut its current LCC terminal to build the new facility over it.

Outside of Asia Pacific are two opposing if limited views. At the new Berlin Brandenburg facility, which when it opens in under a month will be Europe's first new major airport in 15 years, the airport will contain full service carriers but also easyJet and Ryanair, the former of which will be the third-largest occupant. Currently full service carriers are primarily at Tegel while LCCs are at Schönefeld, intended to be a LCC facility. easyJet and Ryanair will pay usage fees higher than the current rate at Schönefeld, but will benefit from growth opportunities and even the same type, if on a lower scale, of network connectivity Asia-Pacific carriers are pursuing.

As easyJet CEO Carolyn McCall said of Berlin Brandenburg, "We are in Berlin where we are strong and intend to be stronger with the new airport. Passengers who previously only flew from Berlin Tegel will be tempted to fly easyJet once all airlines serve the same airport," Ms McCall said to Anna.aero.

At a time Europe will unite LCCs and full service carriers, North America is looking to further split operations. Southwest Airlines is lobbying the Houston Government to build international flight handling at Houston Hobby Airport. The plan is being met with fierce resistance from United Airlines, the anchor tenant of Houston Intercontinental. Southwest already has a large operation at Houston Hobby, meaning its plight is to have its facility expanded so it can remain there rather than switch to a new facility; it is not picking between two equal contenders.

Growth in the region remains robust with LCC demand generally outstripping capacity increases. That limits the amount of price stimulation for new services. The current wave of LCCs are taking advantage of their early positions to pursue higher yields that come from more intricate models, such as having connectivity by being co-located with full service peers or fellow LCCs.

As more carriers pursue stricter point-to-point operations, demand for alternative airports will grow. Until then, airports and airlines will mostly enjoy the benefit of a LCC terminal at an otherwise full service airport.

AirAsia X has confirmed its schedule for Beijing, which will commence on 22-Jun-2012 with four-weekly services, at which point the four-weekly flights to Tianjin will discontinue. Daily Kuala Lumpur-Beijing service will be offered from Aug-2012. The carrier has had to settle for late night slots owing to restrictions at Beijing.

The slots are very near Jetstar's, which leaves Singapore at 18:35 and arrives in Beijing at 01:00+1 before leaving at 02:10 and arriving back in Singapore at 8:50. Scoot's services to Tianjin will arrive and depart Beijing during daylight hours as Tianjin is not subject to Beijing's congestion and restrictions.