China Hangzhou Xiaoshan Airport, China’s ninth largest airport by passenger numbers, is preparing for strong growth as it capitalises on its prominent position in the Yangtze River Delta Economic Zone. The airport is progressing on its wide-ranging expansion efforts that will see the opening of a third terminal in the last quarter of 2012, providing a much-needed capacity boost at the airport.

The airport has ambitious plans to triple annual passenger levels from 17.5 million in 2011 to 52 million by 2015, while cargo volumes are also expected to triple, to 1.0 million tonnes. To put this in perspective, the nation’s second largest airport in 2011, Guangzhou Baiyuan, handled only 45 million passengers in the year. In terms of cargo, the nation’s two largest cargo airports in 2011, Shanghai Pudong and Guangzhou handled 3.1 million and 1.2 million tonnes of cargo respectively in 2011.

Traffic at Hangzhou Airport has grown rapidly in recent years, pushing the airport up in the rankings from the nation’s 13th largest in 2003 to ninth largest in 2011. However, the airport previously ranked as high as the eighth between 2005 and 2008, but was overtaken by fast-growing and ambitious Xi’an International Airport in 2009.

Passenger volumes have more than doubled at Hangzhou over the past six years, increasing by almost sixfold over the past decade, with an average growth rate of 19.4% p/a. However, growth slowed to a moderate 2.6% in 2011, making Hangzhou the second slowest growing of the major China airports in 2011. In 2011, the airport handled 17.5 million passengers, 2.5 million more passengers than its 15 million annual capacity, and 306,000 tonnes of cargo (+8%). In 2010, Hangzhou was the seventh largest airport in terms of cargo and the ninth largest in terms of aircraft movements. 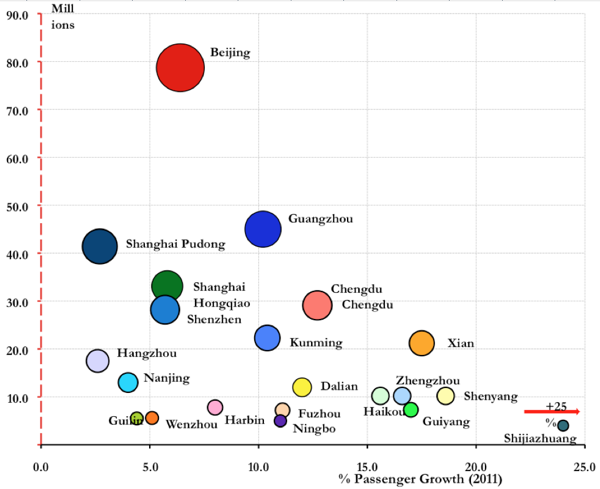 According to Innovata data, 12% of capacity at the airport is deployed internationally, with the regional North Asian markets the largest source market for international arrivals. In recent route announcements, Air China plans to launch service to Osaka Kansai from 02-Jul-2012, with three times weekly frequency utilising A319 equipment. All Nippon Airways (ANA) has meanwhile increased Tokyo Narita-Hangzhou frequency from four times weekly to daily from 20-Jan-2012 with A320 equipment. Batavia Air commenced Denpasar-Hangzhou service on 16-Jan-2012, competing with Wings Air and China Eastern Airlines on the route. 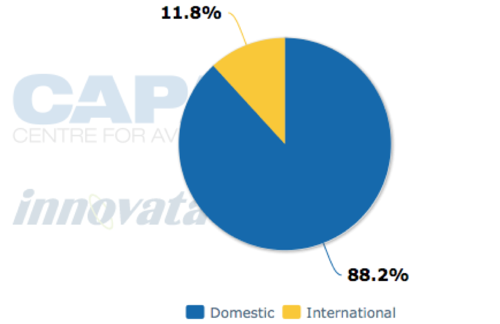 Hangzhou Airport this month stated it would open its new 266,000sqm Terminal 3 facility, which will be the size of its Terminal 1 and 3 combined, in 4Q2012. The airport added that construction work on the airport’s second runway (3400m x 60m) is in its final phase and is expected to be completed in 1H2012. The second runway will have capacity to handle the A380 aircraft upon its completion while the T3 facility will increase the airport’s hangars by 51 to 112.

The T3 facility and runway is aimed at increasing the airport’s flight movement capacity and on-time performance. The T3 will be connected to the airport’s current T1 and upon the completion of the T3, T1 will undergo renovations and upgrade. While T1 is undergoing renovations, all domestic service check-ins will be handled in T3. The above facilities are part of the airport’s CNY10 billion (USD1.6 billion) phase two expansion project, which commenced in Nov-2007.

By 2015, the airport will have completed a second runway, an 50,000sqm international terminal, and a second 100,000sqm domestic terminal and auxiliary facilities constructed at a cost of USD1 billion. Upon completion, the airport's capacity will rise to 25.6 million passengers, 500,000 tonnes of cargo, and 260,000 aircraft movements annually. By 2035, this will double to 52 million passengers, 1 million tonnes, and 500,000 movements, respectively, at which time it will have four runways, a terminal surface area of 570,000sqm, a 380,000sqm cargo warehouse and 156 hangars, with the airport’s total area increasing to 3789 acres. 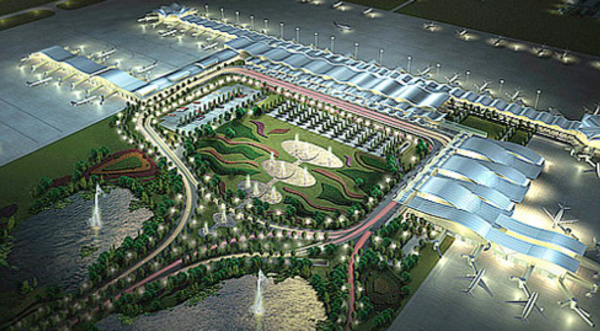 The airport is located 27km east of downtown Hangzhou, capital of Zhejiang Province, which occupies a prominent position on the economic map of China due to its location in the Yangtze River Delta Economic Zone. 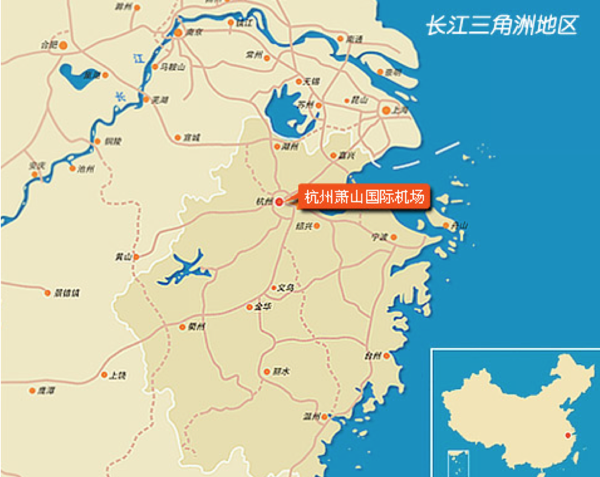 As a result, the province has one of the highest GDP per capita among the nation’s provinces and regions and the airport has reacted to its position by developing its cargo operations to support this. According to Hangzhou Statistics Bureau, the GDP of Hangzhou reached CNY701.18 billion (USD111.3 billion) in 2011, a rise of 10.1% year-on-year. The city has enjoyed a double-digit GDP growth rate for 21 consecutive years. Per capita, GDP for the city's 8.7 million permanent residents rose to CNY80,595 (USD12,800), one year after it passed the USD10,000 milestone in 2010. Some of the nation’s largest foreign investment companies are located in Hangzhou including Motorola and Toshiba, with a considerable density in high technology industries.

Zhejiang Province also has strong tourism potential with 17 national scenic parks and 40 provincial parks, and its tourist revenue accounts for around 11% of the provincial GDP. According to Hangzhou Municipal Economic Commission, more than 6 million visitors visited Hangzhou during the seven-day Chinese New Year holiday in 2012, generating revenues of CNY2.5 billion (USD397 million), a 6.4% year-on-year increase. Hangzhou Airport handled 340,900 inbound and outbound tourists over this period.

Hangzhou Airport is the busiest airport in Zhejiang Province. Classified as a national trunk line airport and Grade-A international airport by the CAAC, the airport is growing to meet the rapid growth of the Yangtze River Delta Economic Zone. Meanwhile, a 202km Shanghai-Hanghzou high-speed railway (HSR) was launched in Oct-2010, also to capitalise on this growth, although this does not provide any competition for airport given the small sector length (190km or 45 minutes by HSR) involved. 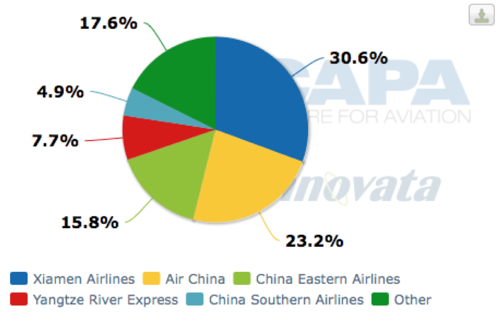 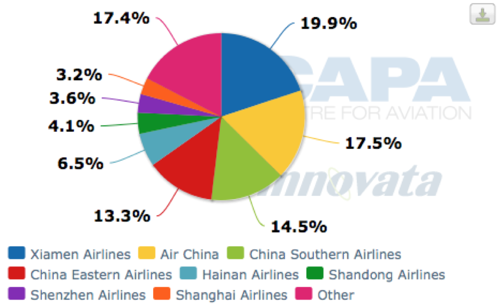 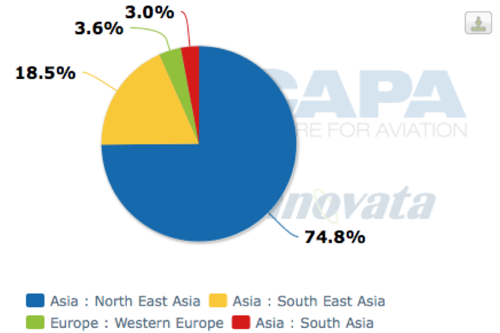 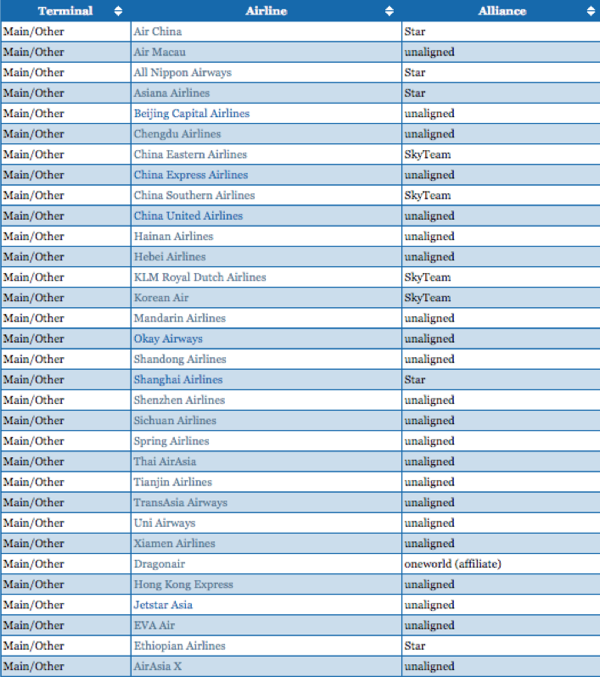