Southwest Airlines has bolstered its efforts to introduce international fights from Houston Hobby Airport through the introduction of an elaborate campaign – freehobbyairport.com – to encourage Houston residents and its larger passenger base to lobby city officials to allow it to forge ahead with plans to carry out its often talked-about desire to serve near international destinations from the US through the construction of a USD75 million-USD100 million international terminal at the airport. Not surprisingly, Southwest has won support from the Houston Airport System (HAS), which operates both Hobby and Houston Intercontinental Airport. It is now up to the city council to decide how it will balance Southwest’s request against the opposition of United Airlines, which dominates air passenger traffic in the Houston metropolitan area and at Houston Intercontinental specifically. If Southwest succeeds in its quest to launch new international flights from Hobby, it must ensure the new facility meets the expectations of US passengers, who have a general distaste for bare-bones airport facilities. 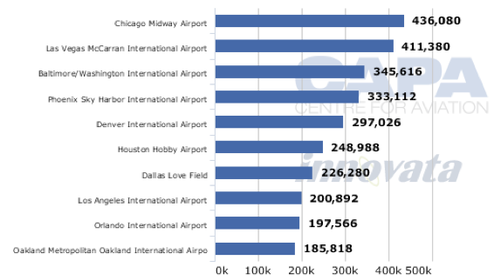 Earlier this year Southwest asked the City of Houston to look into the construction of a five-gate international facility. Initial plans provide for a Federal Inspection Services (FIS) facility to accommodate Customs and Border Protection (CBP) services. HAS has stated the new terminal would take roughly three years to develop and construct, and that Southwest has suggested the capital cost of the terminal should be funded by increasing the passenger facility charge (PFC) at Hobby from USD3.00 to USD4.50. HAS highlights Hobby is one of the last remaining facilities in the US not to charge the higher PFC tax. The airport operator states all incremental costs for the new terminal could be covered by a common usage fee charged to carriers using the FIS.

Pre-clearance not a realistic option

International flights require customs and immigration facilities, which Hobby does not possess. Another way of avoiding the need for an international terminal for US-international services is for foreign airports to apply for US Customs and Border Protection pre-clearance status such as that found (uniquely in Europe) at Ireland’s Dublin and Shannon airports, as well as more commonly in the Caribbean and, especially, Canada. Pre-clearance in Canada enables carriers to link many more Canadian points with US points than if they were restricted to US airports with dedicated international facilities, and also ensures a shorter arrival procedure, ideal for stimulating growth.

Such facilities are a costly affair and subject to intense scrutiny and regulation by the US authorities. It is rumoured that those facilities at Dublin Airport cost upwards of EUR25 million (USD32.7 million) and it is known that passengers using them have to pay a separate passenger charge of EUR7.50 at Dublin Airport. Passengers who are pre-cleared in this fashion can use domestic gates in airports or even enter the US through domestic-only secondary level airports. It is highly unlikely that the collective airports that Southwest is interested in flying to could afford that sort of investment, though it might be an equation that Southwest was willing to consider as an alternative to an international terminal.

Outbound immigration checks in the US are non-existent, so a lack of international facilities is not a concern for outbound traffic. But inbound traffic is a concern, and so an international terminal seems a more appropriate answer.

The proposal at Houston generated a tough response from the city’s dominant airline United, which recently completed the final phase of its merger with Continental through an Information Technology cutover. 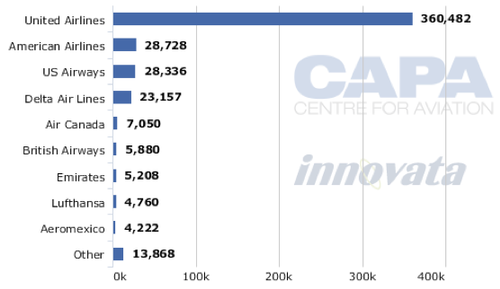 Southwest is the largest carrier at Hobby, which gives it a solid platform to launch international flights from the airport to international short-haul destinations it has been examining for many years. (IT restrictions prohibited earlier international expansion.) An independent study examining new international services at Hobby carried out on behalf of HAS by consultants GRA and InterVISTAS concluded that United and its Star Alliance partners dominate the international short-haul market from Houston, holding a 97% share. The study argues that while United’s strength in the Latin American market provides valuable service to the Houston region, “the dominance of this service, both today and potentially in the future, supports the rationale for reviewing new opportunities for inter-airport and inter-airline competition”. 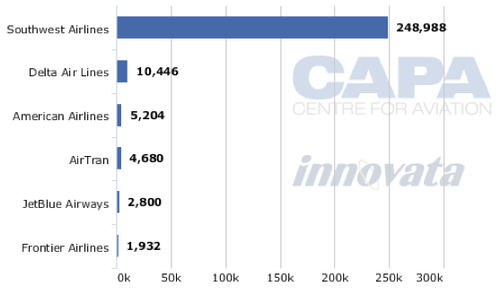 United also argues that if Customs and Border Protection has to serve both airports, it might reduce the number of staff serving Houston Intercontinental, though that appears to be an unrealistic premise and has been rejected by the airport director, Mario Diaz.

The Houston City Council, which has ownership of both airports, could make a decision on the introduction of international flights from Hobby as early as next month. The Reason Foundation’s Bob Poole argues that if the City Council turns down Southwest’s proposal, it will be a “dark day” for airline competition. “Airports exist to serve their customers, and there is no good reason for Hobby’s anchor tenant to be denied the ability to expand its business there. Houston is a large enough metropolitan area that it can support more than one international airport”, he says. Mr Poole adds that if airports were commercial businesses, denial of Southwest’s request could well be challenged on competition grounds (as was the near-monopoly on London area airports when Heathrow, Gatwick, and Stansted were all owned by BAA plc). “Even under current governance arrangements, a decision to prevent expanded competition between IAH [Houston Intercontinental] and HOU [Houston Hobby] would raise the question of whether it is wise public policy to have both major airports in a megalopolis owned and operated by the same party. In general, consumers are better served by competition rather than by regulation. Only a handful of large metropolitan areas in this country are blessed with multiple airports. Operating those airports as a cartel should be viewed as profoundly anti-consumer.”

If the project goes ahead what sort of facilities can the users expect to find in it? The 2009 management report ‘Low Cost Airports and Terminals’, published by CAPA, investigated whether the European experience – the acceptance of the lowest possible standard of facility as a quid pro quo for rock bottom airfares – was transferable to the US. Europe is notable for extremely basic standards in terminals purpose-built for use by budget airlines. Marseille Airport's MP2 terminal, one of the first (Sep-2006), was opened looking like the ‘hardship terminal’ the architects were instructed to avoid, with coloured concrete replacing carpeting. Bordeaux’s ‘Billi’ terminal (2010), known as ‘Billig’ – a German word meaning cheap – has, according to one online rant, ‘cardboard walls’. Britain’s Coventry Airport (2005-2009) used building workers huts, known as ‘Portakabins’ that were knocked together, as a terminal while it waited for a decision on whether a new terminal could be built. The local municipality voted against it and the airport closed down.

The simple answer is that such Spartan standards are extremely unlikely to be replicated in the US unless there is a sea change in public perception of what airports represent. Lengthy waiting times brought about by security searches and congestion have created a mindset that insists on a high degree of comfort. Airports learned that they were more likely to attract LCCs (whose own onboard standards can be very high by European standards) by improving public service levels rather than by reducing them. Numerous airports that sought to attract LCCs for the first time were found actually to have increased terminal Cap Ex and service expenditure to do so rather than having reduced it. Southwest itself has previously invested in facilities where it saw a specific need, such as in the USD264 million concourse at Baltimore-Washington International Airport (now Southwest’s third busiest hub) that opened in 2005, which was part financed by the airline. Baltimore-Washington International was simply running out of space at the time. BAA Maryland, then a new division of BAA, provided upmarket retail and food and beverage facilities. Another similar facility was opened by Southwest at Phoenix, Arizona (Southwest’s fourth busiest hub), though on a smaller scale. The airline is directly funding the USD519 million terminal at its base at Dallas Love Field Terminal, and funded and built the USD65 million Islip Terminal (Long Island, New York), and has also funded and built major baggage systems in several airports.

None of those terminals compare with JetBlue’s Terminal 5 at New York John F Kennedy International Airport. JetBlue positioned itself as a LCC with passenger-friendly frills that even exceeded legacy carrier offerings. Thus it was unlikely to be attracted to the concept of a ‘hardship terminal’ and the USD745 million facility (USD80 million provided by JetBlue) was launched.

One of the true budget terminals in the US closed in 2009 at Austin-Bergstrom International Airport after Mexican LCC VivaAerobus ended flights to the city. Ironically, Southwest opposed the terminal, arguing carriers operating from the no-frills facility would have a substantial cost advantage. Southwest is Austin’s largest carrier in terms of seat share.

Southwest is bullish about the expansion of Hobby Airport to initiate international service, saying it would be “an economic windfall for the City of Houston, worth more than USD1 billion annually.” A spokesperson continued: “It will provide low cost international competition for travels to and from the Houston metro area. Low cost competition has been proven to expand markets and we believe the ‘Southwest effect’ will provide the City of Houston more options when booking international flights.”

Other airlines that are known to be in the business of investing in terminals, or evaluating it, include:

Note: The information in the table above is taken from the Global Airport Investors Database

Southwest appears to have started a trend. Frontier Airlines announced (16-Apr-2012) plans to shift its Houston operations from Houston Hobby Airport back to George Bush Intercontinental Airport, effective 11-Jul-2012. Frontier will be the only domestic LCC at George Bush Intercontinental following the move. Meanwhile, Hobby Airport’s USD110,000 expansion study was criticised by Houston City Council during a hearing on 16-Apr-2012.