The North Atlantic and Europe are suffering a fall in their share of world premium traffic revenues. Moreover, the North Atlantic market has consolidated in recent years, to be dominated by the immunised joint ventures within the three global alliances (plus the new Delta-Virgin Atlantic JV).

So why are two new European all-business class transatlantic services currently planning to enter this market? It may be possible for a differentiated product, tapping into a defensible and large enough sector of this market, to succeed if its business plan is well devised and well executed. However, history is not attractive for a new entrant and previous attempts, before the global financial crisis, saw the rise and fall of Eos Airlines, MAXjet, Sliverjet and L'Avion.

In this first of two reports, we review the defunct all-business class transatlantic airlines and the all-business class services of existing network carriers. We also look at the business model proposed by Dreamjet, which plans to operate between Paris and New York this year. In part two, we will consider Odyssey Airlines, which plans to start up from London City to New York in 2016. 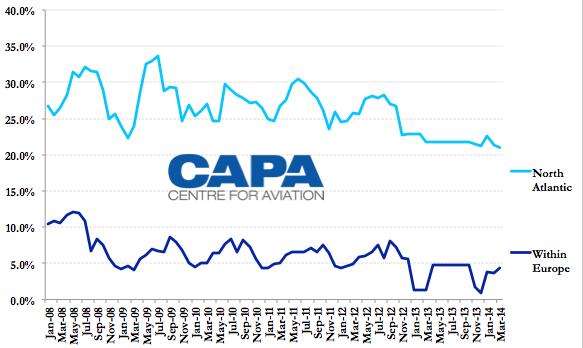 The short-lived and not so golden era for all-business class transatlantic airlines was between 2005 and 2008, peaking in 2007, when there were three operating between the UK and the US (Eos Airlines, MAXjet and Silverjet) and one between France and the US (L'Avion).

In 2008, another entered on the France-US market, but this one (OpenSkies) was a subsidiary of British Airways. It is the only one still operating today, but it is no longer all-business class.

After Eos, MAXjet and Silverjet had gone out of business and BA had acquired L'Avion and merged it with OpenSkies, BA set up an all-business class service from London City to New York JFK in 2009. Other major airlines, such as Lufthansa, SWISS and KLM, have experimented with the concept on the Atlantic by outsourcing to PrivatAir, but none of these currently survives in an all-business class format.

Hong Kong Airlines briefly operated all-business class A330 equipment to London Gatwick in 2012, but could not make the concept work. The most recent premium-only service from a network carrier is Qatar Airways' Doha-London service. SAS is to launch a service between Stavanger in Norway and Houston, Texas from 20-Aug-2014 in a 44 seat Boeing 737-700 operated by PrivtAir. History certainly seems to suggest that it is necessary to be part of a large network airline to succeed in this segment of the market.

Dreamjet may launch Paris-NYC as soon as Jun-2014 or Jul-2014, but AOC still pending

Dreamjet plans to fly Boeing 757-200 equipment in an 80 seat, all-business class configuration between Paris CDG and New York Newark. The yet-to-be-launched French airline has further plans to expand its transatlantic operations from France and, perhaps, to add other European cities.

Aimed at small and medium sized enterprises, Dreamjet plans to use the GDS and direct online distribution channels and to offer fares at a 30% to 50% discount to the competition, according to media reports. There appears to be no website yet for the company and online booking is not available, although it is reported to be opening bookings imminently.

Given the current absence of any sales channel visibility and reports that 'Dreamjet' may only be the name of the project to start the airline, rather than its final name, the time frame for the launch of operations remains hazy.

Dreamjet's application to the US Department of Transportation for a foreign carrier permit, which envisaged a late Jun-2014 commencement of operations, and that to the DGAC for an AOC are pending. Some media reports suggest it now aims for a Jul-2014 launch.

Its US DoT application appears to have been inadvertently caught up in the controversy surrounding the application by Norwegian Air Shuttle's Irish-based international subsidiary NAI. The US pilot union ALPA, in response to NAI's backing of Dremajet's application, has said that it also supports the latter, but argued that it could not be more different from NAI's. This link, however indirect, to the distinctly controversial NAI application may mean that Dreamjet's approval takes longer as the DoT needs to ensure it treats both applications fairly.

Nevertheless, Dreamjet has reportedly raised EUR30 million from private investors, taken delivery of its first Boeing 757-200 and signed an agreement for a second to be delivered before the end of 2014 (the aircraft are leased from Icelandair). It is also understood to have commenced the recruitment of cabin staff.

The main force behind Dreamjet is Yvelin Frantz, the founder of all-business class airline L'Avion, which operated between Paris Orly and Newark and was sold to British Airways in 2008. Peter Luethi, former COO at Jet Airways and with previous experience at Swissair, is also involved. The supervisory board will be co-chaired by businessman Charles Beigbeider and former director of the French civil aviation authority (DGAC) Michel Scheller, according to La Tribune (20-May-2014).

At least on the face of it, Dreamjet's business model seems similar to that of L'Avion, perhaps not surprisingly, given the involvement of Mr Frantz. It plans to operate the same type of aircraft (757-200), albeit with ten fewer seats, and adopt a similar price discounting approach.

L'Avion was bought by BA

L'Avion struggled to establish itself as sustainable standalone competitor, partly due to the lack of feed and a decent loyalty scheme and also because of the smaller size of the premium market in Paris compared with London. However, it was successful enough to sell itself to BA for GBP54 million in Jul-2008, after which it was integrated into BA's Paris-based OpenSkies subsidiary in Apr-2009.

This may have owed as much to timing as anything else. L'Avion launched at a similar time to BA's OpenSkies, the British flag carrier's small, but highly visible, attempt to take advantage of the then-recent liberalisation of EU-US traffic rights.

The first, and still only, launch of transatlantic operations by a European national carrier in another national capital, BA was keen to make a go of this new all-business class project. The Paris market could not really support two similar operators and BA was thought to be considering closing OpenSkies before it acquired L'Avion. It then switched to a three class model, but at least it did not have to beat an embarrassing retreat.

Will the Dream become a nightmare?

Dreamjet's biggest rival will be Air France, which dominates the Paris-New York market and does not appear too concerned at the imminent threat. The similarities between Dreamjet and L'Avion have not been lost on Air France-KLM CEO Alexandre de Juniac, who predicts it will be similarly short-lived.

Perhaps more will become clear once it gains its approvals and provides more information on its business. However, from the limited information available on Dreamjet's planned business model, it does seem eerily similar to L'Avion, caught between the contrasting approaches of the discounter and the truly premium product offering. Without a significant network beyond its core route(s), without a major loyalty scheme and with ageing Boeing 757 aircraft, it is not obvious what will be the source of Dreamjet's competitive advantage.

In our second report on the planned new transatlantic all-business class carriers, we will look at the business model of Odyssey Airlines, which plans to be the first operator of Bombardier CSeries aircraft from London City Airport.