Marseille Provence Airport was Air France’s first “provincial base” and opened in Oct-2011 with 13 new routes and a new organizational structure allowing for more efficient use of its aircraft and crew. Setting up bases in secondary French cities is one component of the French carrier’s turnaround strategy, which is aimed at returning its short and medium-haul operations to profitability while also curbing the growth of low-cost carriers and regaining part of the market share it lost to high-speed rail.

The carrier has steadily increased its route network from Marseille and has shown firm determination not to be intimidated by Ryanair, Europe’s largest and most aggressive LCC. LCCs have a 24% share of the weekly seat capacity at the French airport and Ryanair has a 20% share, but Air France is by far and large the airport’s largest operator with 101,902 weekly seats and a capacity share of 38% for the week of 11-Jun-2012 to 17-Jun-2012. Sister airline KLM deploys an additional 6080 seats from/to Marseille. Air France and KLM’s share of aircraft movements at peak-times at Marseille is 48.9%. 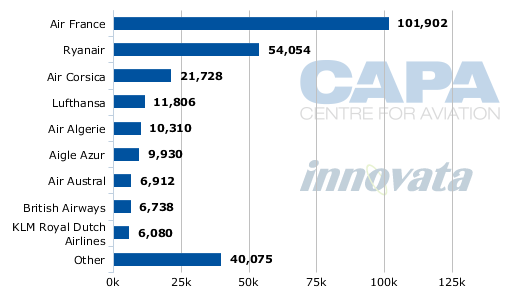 Ryanair closed its base at the airport in Jan-2011 after a legal dispute with the French authorities on social security charges and payments. It removed the four 737-800s based there and reduced its route network from 23 to just 10 routes, but it has been re-adding routes since then.  According to the Ryanair's website, it currently operates on 35 routes to/from Marseille, eight of which are domestic.

Both carriers are fighting for supremacy at the airport and in the past months have upped their capacity significantly. From the week of 27-Feb-2012 to 04-Mar-2012 to the week of 11-Jun-2012 to 17-Jun-2012 Air France expanded weekly seat capacity at Marseille by 73% while Ryanair's capacity jumped 107%.

Many route changes since the Marseille base launched

As it competes head-to-head with Ryanair, Air France has borrowed some practices from its Irish no-frills counterpart: long-term loyalty to a new route has been replaced by swift network re-alignment. Air France has been quick to add and drop routes at its Marseille base, which shows it has become more flexible in its thinking and reaction to a very dynamic short-haul market.

Air France announced 13 new non-stop destinations from Marseille when it opened the base in Oct-2011: Basel/ Mulhouse EuroAirport, Biarritz and Brest in France, Athens, Copenhagen, Düsseldorf, Eindhoven, Milan Malpensa, Moscow and Prague in Europe and Casablanca, Beirut and Istanbul in the greater Mediterranean region. The carrier introduced an additional five routes on 25- Mar-2012 when it inaugurated twice-weekly service to Barcelona, a thrice-weekly to Marrakech, four weekly frequencies to Hamburg and five weekly frequencies to Venice. Several of these routes have been pulled or will be canceled in the coming months, according to the GDS displays. Air France outsourced its 11 weekly flights to Toulouse to its regional affliiate AirlinAir from 29-May-2012. Air France has a shareholding in Airlinair, which operates a fleet of 25 ATR aircraft.

On two of the canceled routes Air France is currently the sole operator, on two routes it competes or competed with Ryanair and on one route it competes with Vueling, the Barcelona-based LCC in which Iberia has a 45% stake.

As it exits several markets from Marseille Air France is adding new services from the airport. It will launch a thrice weekly service to Tel Aviv with Airbus A319 or A320s on 5-Sep-2012 and it will start operating 21 weekly frequencies to/from Amsterdam, the hub of KLM, on 3-Sep-2012. These services are currently operated by KLM using a mix of Fokker F70 and Embraer E170 and E190 equipment. KLM is sole operator on the route.

Air France has no competition on several routes from Marseille, such as Paris Orly and Paris CDG, Athens, Berlin Tegel, Hamburg, Lyon, and Istanbul Ataturk airport, although Pegasus Airlines operates to Sabiha Gokcen Airport. Orly and Paris CDG are the airport’s busiest routes in terms of seat capacity and frequency. 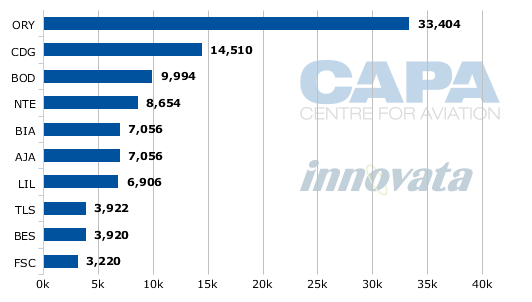 Air France competes on four domestic routes with Ryanair: Bordeaux, Nantes Atlantique, Lille Lesquin and Brest. Ryanair has been gradually gaining market share on the route to Brest; at the end of 2011 Air France still had 42.6% share of weekly seat capacity compared to 32.5% at present. 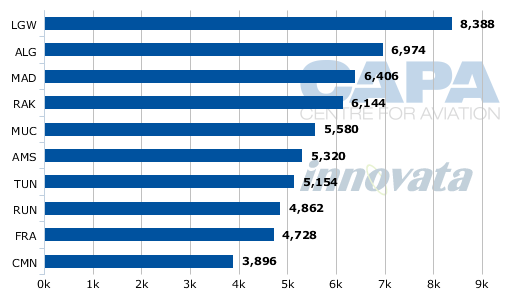 Air France is absent on six of the airport’s largest international routes (only five when including the Marseille-Amsterdam route that is operated by the KLM arm of Air France-KLM) and it has only a minority capacity share on the other routes.

French airports in 2011 handled 163.6 million passengers and about half of the passengers (46%) used a regional or provincial airport, according to the Union des Aéroports Français. If Air France wants to remain France’s leading airline it has to defend its market share and further build its presence in these regional airports, and ensure that LCCs do not take over all the point-to-point traffic. 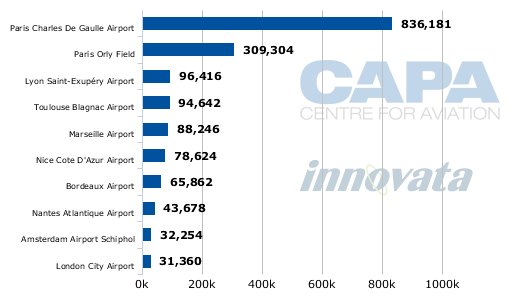 So far LCCs have a relatively small market share in France. Low-cost penetration in the French domestic market is particularly low, about 14%, while in the international market the LCC penetration rate is currently about 27%, according to Innovata data.

The carrier’s regional “commercial offensive” is centered on three airports in the South of France, Marseille, Toulouse and Nice. Results for Marseille, which was the launch airport of its new concept, are encouraging. Despite the strong presence of Ryanair and the airport's low cost MP2 terminal Air France, has recaptured market share and now offers almost 38% of the weekly seat capacity, although profitability is unknown and, at best, challenged – as it is for full service carriers trying to compete against LCCs.

Air France has a strong and dominant market share in terms of seat capacity in seven of the country’s busiest airports; however no frills airlines have increased their passenger throughput at all but one (Basel Mulhouse) of these airports. In order to sustain its nascent success with its domestic regional push, Air France has to continue implementing its “commercial offensive” strategy effectively by improving its flexibility, productivity and price offer to passengers.