Air France has made a U-turn with one component of its turnaround strategy by cancelling plans to launch four new short-haul international routes from new bases in secondary French cities. The four routes were to be launched in early Apr-2012 under the “commercial offensive” portion of Air France’s turnaround strategy, which is aimed at curbing the growth of budget carriers and French railways while also returning its regional operation to profitability. The decision to cancel the four routes before they launched will see Air France’s “offensive” weaken, providing further opportunity for budget carriers such as easyJet to strengthen their operations in France.

Cancelling routes before they are launched is rather unusual, especially in the situation Air France finds itself in. France has a relatively low LCC penetration rate, at just over 20% currently. Low-cost carrier penetration in the French domestic market is particularly low, about 14%, while in the international market the LCC penetration rate is currently about 23%, according to Innovata data.

As a result, it is clear that France is a huge market untapped by Europe’s expanding LCCs. Air France’s “commercial offensive” strategy is vital to the airline to ensure it maintains its market share in France, particularly in the southern part of the country, however, the airline now appears to be backing down somewhat.

Air France’s regional strategy was originally announced in Oct-2011, focussing on the airline’s operations in southern France. This saw the SkyTeam carrier immediately open a regional base in Marseille. Two more bases, Toulouse and Nice, are slated to open in Apr-2012 and finally a base in Bordeaux is planned for later in 2012. But Air France’s new focus on these four bases is now set to reduce following its latest cutbacks, and potentially more reductions will follow.

Toulouse was in line to see 16 new Air France routes during Apr-2012, increasing total routes at Toulouse to 28. But this will now be 14 new routes following the recent cutbacks.

Nice was not to see such a large increase in services, with only six new routes, increasing total Air France services from Nice to 22. But there will now be only four new routes at Nice.

According to Innovata, all four routes will still be operated by other carriers despite Air France’s decision to pull back. easyJet operates three of the four affected routes. Iberia, Spanish LCC Vueling, Turkish Airlines and Brussels Airlines each operate one of the affected routes.

Air France is already the largest carrier at both Nice and Toulouse. But easyJet is on Air France’s heels and is the only other carrier with a significant operation at both French airports. easyJet now has small bases at Nice and Toulouse. 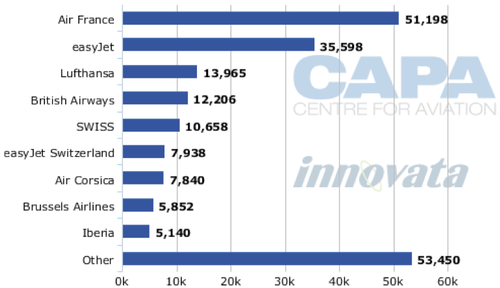 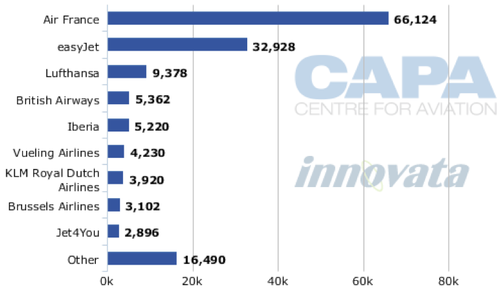 In Oct-2011 easyJet started to turn up the heat on Air France in southern France with the announcement of plans to create two new French bases in Nice and Toulouse. The move included basing two A319 aircraft at each airport in order to strengthen its domestic French network and international network from the south of France.

easyJet stated at the time that it will focus its new Nice and Toulouse bases on routes with strong demand from business and short leisure break travellers. easyJet currently has three other French bases – Paris Orly, Paris Charles de Gaulle (CDG) and Lyon.

easyJet is not the only LCC expanding operations in southern France. New LCC start-up budget carrier Volotea recently stated Bordeaux will be among its first destinations when it launches services from Venice Marco Polo in April. Volotea plans to launch more services to France over the next several months.

Ryanair is also increasing its operations in France, both domestically and internationally. Air France will see Ryanair begin to compete on the Bordeaux-Marseille route from late Mar-2012. Air France is currently the only carrier on this route.

Domestically, Nice and Toulouse also both have an unusually high amount of LCC activity. Presently Nice and Toulouse both have 26% of available domestic capacity held by budget carriers. This is a substantial increase over the national average of 14%.

Air France is clearly feeling the pressure as LCCs continue to expand in southern France.

Traditionally Air France has carried passengers from these regional airports via Paris to other destinations in Europe but has seen declining passenger numbers due to the rising LCCs offering direct point-to-point services across Europe.

Air France’s international network is still relatively safe from the LCC threat at its hub at Paris CDG, where LCCs now only account for about 9% of international capacity. Air France faces a slightly bigger LCC threat there domestically, with the budget carriers now accounting for 16% of domestic capacity at Paris CDG.

Air France first launched its “commercial offensive” in Marseille in Oct-2011 in a preemptive strike against the LCCs. Compared to Nice and Toulouse, Marseille’s LCC penetration rates are still relatively in line with the country’s average. Currently 28% of international capacity and 11% of domestic capacity at Marseille is held by LCCs.

Despite the recent new route reversals at Nice and Toulouse, Air France’s Marseille base is proving successful so far. The carrier, at least for now, has kept intact plans to add five new services from the Marseille base in late Mar-2012 including Marrakech, Barcelona El Prat, Hamburg, Rome Fiumicino and Venice Marco Polo. 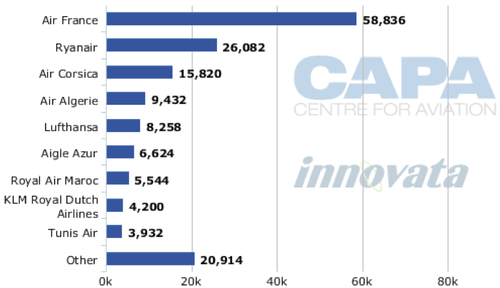 Although it is stepping up competition against LCCs, Air France is not stripping down its product. The carrier will continue to offer traditional services from its new bases in southern France including free in-flight catering, newspapers, checked baggage, online check-in and pre-assigned seating.

But Air France has cut costs by using A320s at its new bases in southern France, which will be crewed by local staff working longer hours. This, paired with “rationalised and optimised” aircraft use, is expected to reduce operational expenses on its services from these regional airports by 15%. Fares are set at a base rate of EUR50 which given the full-service product should prove to be attractive to travellers from the regional centres, particularly corporate traffic.

With Air France leaving its “commercial offensive” move into Bordeaux until later in 2012, the recent cutbacks at Nice and Toulouse raise the possibility that a final decision on whether to open a base on Bordeaux may be left until the level of success at the first three airports is known. Bordeaux already has a high level of LCC competition compared to Nice and Toulouse. LCCs account for 49% of international capacity and 10% of domestic capacity at Bordeaux. No routes have yet been announced for Air France’s planned Bordeaux base, so it remains to be seen how much of a move the carrier intends to make.

The growing LCC threat, combined with other issues regarding Air France’s overall operation, mean the next few years are sure to be either make or break for Air France on the home front. Through improved crew and aircraft utilisation and retaining a premium short-haul product, Air France aims to reassert its dominance in the south of France.