Competition in Mexico’s dynamic market is set to intensify as the country’s smallest low-cost carrier is poised to at least triple in size over the next eight years following a landmark aircraft order with Airbus.

VivaAerobus has ordered 52 A320s, allowing for a rapid replacement of its current fleet of 19 737-300s and significant growth. VivaAerobus is currently a relatively small player in the Mexican market with only a 13% share in the domestic market and is a non-factor internationally as it has just one trans-border route.

VivaAerobus is now seeking to follow its closest competitor, Volaris, with an initial public offering which should provide the funds to support accelerated fleet and network growth. Market conditions in Mexico have improved significantly in recent years but there is a risk of a return to over-capacity and irrational competition given the fleet expansion plans at the country’s four main carriers.

VivaAerobus to accelerate expansion with A320s

VivaAerobus signed on 21-Oct-2013 an order for 12 current generation A320s and 40 new generation A320neos. The first six aircraft will be delivered in 2014 and the last aircraft is slated for delivery in 2021.

The deal, which was signed in Mexico City by VivaAerobus vice chairman and Irelandia Aviation managing partner Declan Ryan, also reportedly includes 40 options. The Monterrey-based carrier, which is partly owned by Irelandia, expects to phase out its current fleet of 19 737-300s by 2016.

VivaAerobus will be able to at least triple its total capacity by the end of 2021 as its 737-300s are configured with 148 seats, providing 2,812 seats across its fleet. The carrier will almost certainly operate its A320s in typical high density single-class 180-seat configuration, providing 9,360 seats across 52 aircraft.

VivaAerobus will also be able to significantly increase average aircraft utilisation rates given the old age of its 737-300s, allowing for an even bigger capacity increase as it transitions to A320s. According to the CAPA Fleet Database, VivaAerobus’ current in-service fleet is between 15 and 28 years old with an average age of 21.3 years.

Volaris’ current fleet of 44 A319s/A320s has an average age of only 4.4 years, according to the CAPA Fleet Database. The fleet operated by Mexico’s other LCC, Interjet, has an average age of 6.6 years. Interjet operates 39 A320s and recently placed into service the first two of at least 15 93-seat Sukhoi Superjet 100s.

VivaAerobus has always stuck to the pure LCC model, catering mainly to leisure travellers who previously opted for the bus. More than two-thirds of the carrier’s domestic 50 routes are currently served with four weekly frequencies or less, according to Innovata data.

VivaAerobus number of domestic routes based on weekly frequencies: 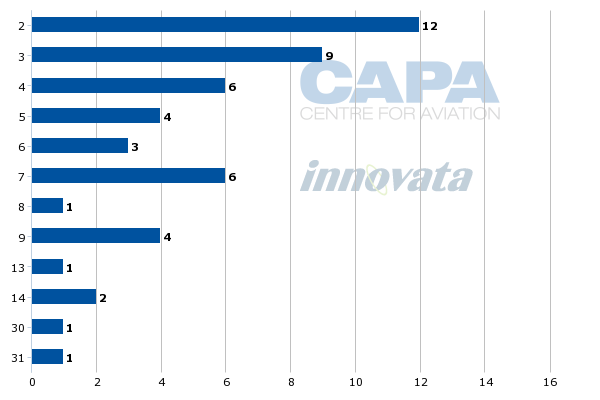 About 60% of Volaris’ domestic routes are also served less than daily. Volaris follows a relatively pure LCC model with 180-seat A320s but has a product positioned slightly upmarket compared to VivaAerobus.

Interjet is more of a hybrid carrier and focuses more on business passengers with a more upmarket product which includes a roomier 150-seat configuration in its A320s. Interjet has only four domestic routes which are served less than daily, according to Innovata data.

The transition to newer aircraft at VivaAerobus could be seen as a competitive response as Volaris and Interjet both have much newer fleets and had already ordered A320neos, ensuring a young fleet well into the future. After focusing initially on Monterrey and thin routes that were not served by other carriers, VivaAerobus began operating in Mexico City in 2010 and now competes on most of the main trunk routes including Mexico’s three largest – Mexico City to Guadalajara, Monterrey and Cancun. VivaAerobus cannot afford to risk losing passengers as Mexico’s growing middle class become savvier travellers and opt for the newer aircraft flown by its competitors.

Mexico City is now VivaAerobus’ second largest base after Monterrey. The carrier has smaller bases in Guadalajara and Cancun, its most recent addition. 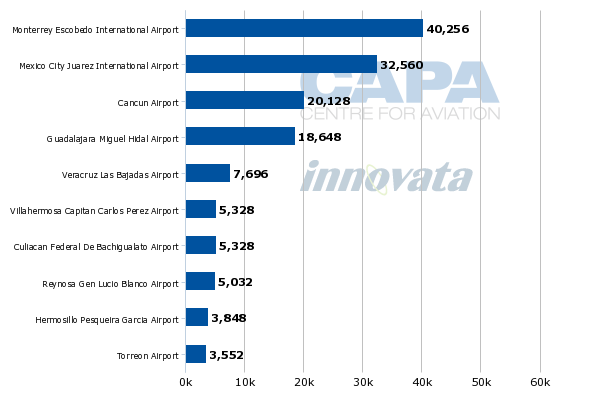 VivaAerobus could also not risk not following its competitors in pursuing the operating cost advantages that come with new-generation narrowbody aircraft and engines. While VivaAerobus initially was operating on routes with limited or no competition, the market has changed and Mexico’s three LCCs will likely end up fighting across all types of routes as the trio expands.

Volaris in Jan-2012 completed an order for 44 A320s, including 14 A320ceos and 30 A320neos. At the time Airbus said it was the largest single commercial aircraft order placed by a Mexican carrier. A Sep-2013 IPO, which generated USD336 million, gives Volaris the cash to help fund rapid growth of its fleet.

In Nov-2012, Interjet signed an order for 40 A320neos. When factoring in its Superjet order and two more A320ceos leftover from its original A320 order, Interjet currently has more aircraft on order than Volaris and VivaAerobus.

Also in Nov-2012, Aeromexico completed a deal with Boeing for 60 new-generation 737 MAXs. This overtook the Volaris deal as the largest single commercial aircraft order placed by a Mexican carrier.

Aeromexico, which also has 787s and current generation 737-800s on order, has a larger order book than Interjet, Volaris or VivaAerobus. But a majority of Aeromexico’s aircraft are for replacement while the LCCs are expected to pursue faster growth. Aeromexico also has a much bigger international network as it serves Asia, Europe and South America along with the domestic and trans-border markets.

Mexico’s four main carriers now have 228 new aircraft on order and 162 in-service aircraft, according to the CAPA Fleet Database. (Aeromexico Connect, which has a fleet of about 60 regional jets but no additional aircraft on order, is not included in these figures. Smaller carriers Aeromar and Magnicharters are also not included.) 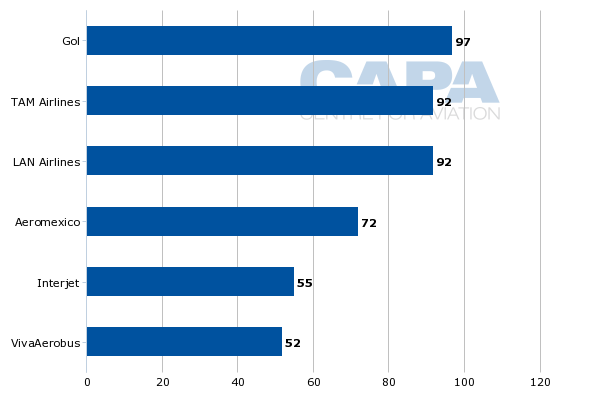 Viva is the 10th largest airline group in Latin America and the smallest of Latin America’s five LCC players, even when combining VivaAerobus and sister carrier VivaColombia. VivaColombia launched services in May-2012 and currently operates domestic services with a fleet of five A320s.

VivaAerobus follows VivaColombia in selecting the A320

VivaAerobus’ A320 order was anticipated since VivaColombia opted for the A320 during its pre-launch phase. VivaColombia has leased second-hand A320s with a current average age of 12 years. The carrier considered following VivaAerobus with 737-300s but concluded A320s were more economical to operate and lease rates on second-hand A320s had come down to the point where they represented a better option. When VivaAerobus launched, second hand A320s were more expensive and more difficult to secure, leading to the decision to go with 737-300s.

VivaColombia has always anticipated that in future it would be able to pursue fleet related synergies with VivaAerobus because at the time of its launch the Mexican carrier had already started evaluating new aircraft types. VivaColombia is also expected to eventually acquire new A320s, including A320neos, although for now it is keen to stick with second-hand aircraft.

Irelandia Aviation and Mexican bus company IAMSA have stakes in both VivaColombia and VivaAerobus. Irelandia has always been a proponent of the pure LCC model and has looked for opportunities to establish and invest in LCCs that are able to stimulate demand in new markets. VivaAerobus is therefore unlikely to deviate from its model as it transitions to new A320s.

Airbus stated that the 52-aircraft order from VivaAerobus represents “the biggest Airbus aircraft order by a single airline in Latin American history”. This suggests Airbus expects that none of the aircraft from the order will be assigned to VivaColombia or new potential Viva-branded LCCs which Irelandia has been looking at launching. However, if market conditions in Mexico become unfavourable, allocating some of the aircraft to VivaColombia or other affiliates could become an appealing option to VivaAerobus’ shareholders.

This option could also become more appealing if VivaAerobus is unable to complete an initial public offering. Irelandia have always had IPOs in the long-term plans for both Viva carriers. As the original Viva, VivaAerobus would come first and reportedly has recently hired Barclays as an IPO advisor.

VivaAerobus would like to dovetail off the success of Volaris’ recent IPO. But Volaris has a stronger position in the Mexican market and VivaAerobus could end up pursuing an offering at the same time as Interjet, which attempted an IPO in 2011 and has been looking at launching a second attempt. The market may not support three Mexican LCC IPOs in quick succession.

While conceivable, a 52-aircraft fleet for VivaAerobus could prove to be overly ambitious particularly when taking also into account the planned growth for Volaris and Interjet. Conditions in Mexico have improved significantly since the collapse of several carriers in 2008 to 2010, concluding with the exit of Grupo Mexicana. For several years prior to 2010 the Mexican market was plagued by irrational competition and unsustainably low load factors and yields.

Profitability and load factors have since improved significantly as the market has seen a more rational amount of capacity. VivaAerobus was one of five LCCs which launched in Mexico in 2H2005 and 1H2006 following de-regulation. It is one of three survivors – ALMA and Avolar ceased operation in 2008 – but is by far the smallest.

VivaAerobus transported 2.6 million domestic passengers and 44,000 international passengers in the first eight months of 2013, according to Mexican DGAC data. The carrier’s average domestic seat load factor for this period was 78%.

Mexico’s three LCCs captured 61% of the market in the first eight months of 2013, including 25% for Interjet, 23% for Volaris and 13% for VivaAerobus. About 5% of the market was captured by Aeromar and Magnicharters, which follow regional and leisure carrier models respectively.

VivaAerobus has pursued slower expansion than its two LCC competitors

Over the last year Volaris has been pursuing the most rapid domestic expansion. Interjet has been focusing more on the international market while VivaAerobus has slowed down expansion. According to CAPA and Innovata data, VivaAerobus’ current domestic capacity levels are only about 1% above Oct-2012 levels but are about 12% above Oct-2011 levels.

The transition to A320s should lead to faster capacity expansion as well as less seasonality in its operation. Typically the carrier has had large capacity fluctuations depending on the time of year, a benefit of having an old fleet. VivaAerobus executives have said that the carrier aims to secure 20% to 25% of Mexico’s domestic market by the time all 52 of its A320s are delivered in 2021.

VivaAerobus has expanded significantly since the 2010 collapse of Group Mexicana, which included LCC subsidiary MexicanaClick. But Interjet and Volaris have added more passengers – both domestically and internationally.

VivaAerobus’ annual passenger base has increased by over two million passengers since Mexicana’s collapse. But Volaris’ base has now increased by about four million and Interjet’s base by about five million.

VivaAerobus has particularly lost ground to its LCC competitors in the international market. VivaAerobus was operating international services before Volaris and Interjet. But its US operation has remained small, with several routes started and suspended. Meanwhile, Volaris and Interjet have both pursued rapid trans-border expansion after the collapse of Mexicana, which was the largest Mexican carrier in the US market.

Interjet also has started to pursue expansion southward and now serves four destinations in Latin America. Its latest Latin American destination, Bogota, was launched in Jul-2013. Interjet beating the Viva Group to the Mexico-Colombia market is somewhat surprising given Viva has affiliates in both countries.

Over the long term the Mexican market may not be able to sustain three LCCs, particularly if all three carriers seek to expand rapidly and start to chase the same segments of the market. Clearly two flag carriers for a market the size of Mexico was too many and the demise of Mexicana was a healthy outcome. But similarly sized markets generally have only one or two LCCs rather than three.

Even much larger Brazil now has only two LCC groups, with Azul and Gol. Brazil has seen major consolidation in its LCC sector with Azul merging with TRIP and Gol acquiring Webjet. Mexico could also eventually see an LCC merger or acquisition – and the fact all three of the country’s LCCs will be operating A320s with A320neos on order would make integration easier.