Mexico returns to double-digit domestic growth in 2012, boosting outlook for Aeromexico and LCCs

Mexico’s domestic market recorded double-digit growth in 2012 for the first time in five years and only the second time this century. The Mexican aviation industry has reached its healthiest point since deregulation led to the launch of five low-cost carriers seven years ago. The market now features a strong legacy airline group and three LCCs which are seeking to cash in on their relatively strong positions by holding initial public offerings.

The 10% domestic growth represents the highest figure for Mexico since 2007, when five new low-cost carriers drove a 23% increase in passenger traffic to 27.4 million. The opening up of Mexico’s market to new entrants led to a prolonged period of over-capacity, irrational competition and unprofitability for every carrier. Mexico’s domestic market ended up declining after reaching a high of 27.7 million passengers in 2008 as several carriers went bust due to a brutal combination of over-capacity and deteriorating economic conditions.

Seven years after deregulation, the Mexican market has finally recovered. The 28.1 million domestic passengers carried in 2012 represents the first time the previous record figures from 2007 and 2008, when nine to 10 major players competed in the market, have been exceeded.

Aeromexico, including its regional subsidiary Aeromexico Connect, is the lone legacy survivor while Interjet, Volaris and VivaAerobus are the three surviving LCCs. Grupo Aeromexico captured 38% of the domestic market in 2012, a decrease of 2ppt compared to the 40% share the group had in 2011 but still a 6ppt increase compared to its 32% share from 2009, the last full year before Mexicana’s collapse. Group Aeromexico has seen its domestic traffic grow by 34% since 2009, filling some of the void left by Grupo Mexicana, which captured a 27% share of the domestic market in 2009.

Mexico’s surviving trio of LCCs have grown even more rapidly since the collapse of Mexicana and Click, filling most of the void left by Grupo Mexicana. Interjet, Volaris and VivaAerobus combined have seen their domestic traffic more than double over the last three years, from 7.6 million in 2009 to 16 million in 2012.

Smaller LCC VivaAerobus has seen its share of the domestic market increase from only 6% in 2009 to 12% in 2011 and 13% in 2012. The other two carriers operating scheduled services in Mexico, regional carrier Aeromar and leisure carrier Magnicharters, account for the remaining 5% of the market.

All of Mexico’s major domestic carriers recorded year-over-year passenger traffic growth in 2012, driving the 10% growth for the overall market. Volaris recorded the fastest growth at 25% followed by VivaAerobus, which like Volaris focused on domestic expansion in 2012, at 20%. Grupo Aeromexico and Interjet recorded 4% and 6% growth, respectively, as they focused more on international expansion.

When compared to other emerging markets, including other markets in Latin America, the growth in Mexico over the last decade has been relatively unimpressive. Even with the launch of LCCs taking over half of the market and stimulating demand with lower fares, Mexico’s domestic market has only grown by 60% since 2002. It has also taken 20 years for Mexico’s domestic market to double in size.

Even with its first double-digit showing in five years, Mexico was the second slowest growing domestic market in 2012 among Latin America’s six largest domestic markets. Only Brazil, which experienced a dramatic cool down after recording 24% domestic growth in 2011, had slightly slower growth than Mexico in 2012.

Source: CAPA – Centre for Aviation, Brazil’s ANAC, Mexico’s DGAC, Colombia’s CAA, Chile’s CAB, Peru's DGAC and Aeropuertos Argentinas 2000
*Note:  Colombia data is for the first 11 months of 2012 because full-year supply and demand 2012 data is not yet available. For Brazil, Mexico, Chile, Peru and Argentina data is for the full year. All data comes from civil aviation authorities except for Argentina in which case the data comes from the country’s privately-owned airport operator. Supply and demand data used rather than origin and destination data when possible.

But while Mexico has not seen the growth of its Latin American peers over the last decade, the market has now finally stabilised, ushering in a new era of growth and – hopefully - profitable growth. Mexico’s economy also has stabilised and while it still is not the fastest growing country in the region the ingredients are there for growth.

LCCs are particularly well positioned to tap into the growth as rising discretionary income and low fares persuade more and more bus travellers to take to the skies. Volaris and VivaAerobus are particularly targeting the first time flier segment and leisure markets. Both carriers have particularly been adding capacity in beach markets, believing its low fares can stimulate more trips to Mexico’s many popular beach resort destinations.

Over the last year Volaris has grown capacity on the Mexico City-Cancun route by about 45%, according to Innovata data. Volaris is now the second largest carrier in the market with a 31% share of capacity, compared to a 36% share for Aeromexico, 23% for Interjet and 10% for VivaAerobus.

Aeromexico and Interjet, which is focused more on the business sector of the market and operates A320s in a spacious single-class 150-seat configuration although technically it is an LCC, are the main carriers in the Mexico City to Guadalajara and Monterrey markets. Aeromexico has a 42% share of capacity on Mexico City-Monterrey and a 41% share on Mexico City-Guadalajara while Interjet has 36% and 30% shares, respectively.

Cancun was by far the fastest growing major domestic Mexican airport in 2012, providing another indication of the strength of the local beach market. Cancun recorded 25% domestic traffic growth in 2012 to 4.6 million passengers, according to Mexican DGAC data.

Mexico’s top 10 airports by domestic traffic (millions of passengers): 2012 versus 2011 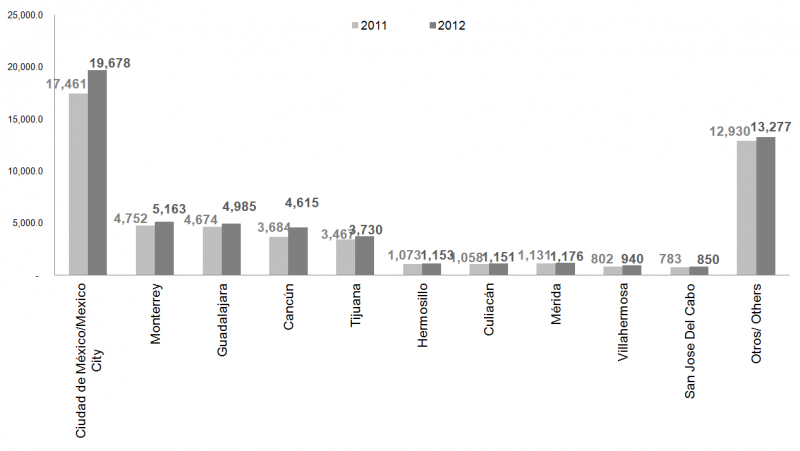 Interjet and Aeromexico will both be focusing primarily on expansion in thinner regional markets as Interjet takes its first batch of Sukhoi Superjet 100s and as Aeromexico Connect continues to grow its fleet of Embraer E-jets. VivaAerobus and Volaris will likely expand primarily on point-to-point leisure-focused routes where they see opportunities to stimulate demand.

Mexican carriers have focused traditionally more on migrant worker and visiting friend and relatives (VFR) traffic in the Mexico-US market. But most of Mexicana’s former migrant worker-VFR routes have now been taken over by other Mexican carriers and Mexico’s LCCs prefer to expand domestically rather than compete with US carriers in beach markets.

Several of Mexico’s smaller international airports recorded traffic declines in 2012, including the beach markets of Cozumel, Mazatlan, Puerto Vallarta and San Jose del Cabo. This shows the relative weakness in the US inbound leisure market in 2012 as US carriers only grew in the Mexican market by 1%. These airports rely entirely on North American carriers for their international traffic; but generally recorded overall growth as domestic demand for beach destinations increased significantly.

Mexico’s top 10 airports by international traffic (thousands of passengers): 2012 versus 2011 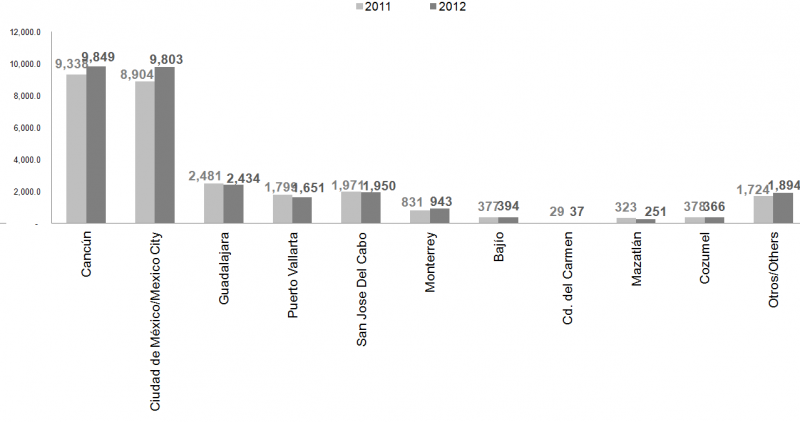 The second largest international market from Mexico, Canada, is even more dominated by foreign carriers. Mexico-Canada traffic grew by 5% in 2012 from 2.2 million to 2.3 million passengers. But only 60,000 of these passengers were flown by Mexican carriers.

Mexico’s third largest international market, Spain, saw a 6% drop in traffic in 2012 to 766,000 passengers. Aeromexico has only about a 25% share of the Mexico-Spain market.

Overall Mexican carriers only account for 22% of total international traffic to and from Mexico.

Panama has emerged as Mexico’s fourth largest and fastest-growing international market, which is an indication that Mexican carriers are also losing out to foreign competitors on flights within Latin America. The Mexico-Panama market grew by 56% in 2012 to 740,000 passengers.

Panama’s Copa Airlines, which aggressively markets its services beyond Panama City to South America and the Caribbean, has been growing rapidly in the Mexican market. Copa now operates five daily flights to Mexico City and four daily flights to Cancun. It also operates five weekly flights to Guadalajara and four weekly flights to Monterrey, which it launched at the end of 2011. No Mexican carrier currently serves Panama as Aeromexico quickly pulled out of the market after launching a Mexico City-Panama City service in 2011.

The rapid growth of Copa indicates the Panamanian airline is carrying a large portion of passengers heading from Mexico to South America, particularly destinations which are not linked with non-stop flights. Aeromexico and Mexican carriers risk losing more traffic to Copa and other Latin American carriers if they do not build up their Latin American networks as intra-Latin America traffic is expected to continue growing rapidly. Mexico is also served by Latin American carriers Avianca, TACA, LAN, TAM and Aerolineas Argentinas.

Domestic outlook is brighter as international opportunities are limited

Mexican carriers remain predominately focused and have always been more attracted to the US market than to Latin America or Europe. The reality is Mexican carriers struggle to compete against foreign carriers in the international market and when market conditions are favourable domestically, like they are now, it is logical for Mexican carriers to focus on domestic expansion.

Mexico’s aviation industry has gone through a tumultuous period with a huge wave of consolidation finally ending a prolong period of over-capacity and unsustainably low load factors. Aeromexico’s position has been strong since Mexicana’s collapse even if it remains a relatively small international operator with a widebody fleet of only 11 aircraft. The SkyTeam carrier has been consistently profitable since the demise of Mexicana and completed a successful IPO in mid-2011.

All three of Mexico’s LCCs are keen to follow Aeromexico with their own IPOs, which could be used to further accelerate fleet and network expansion. VivaAerobus has indicated it aims to seek an IPO in 2013 while larger Volaris and Interjet also have IPOs in their plans.

With the domestic market they rely on heavily growing again and Mexico’s aviation industry having reached a healthy equilibrium, the outlook for all three Mexican LCCs is relatively bright. Mexico may not be the best growth market in the world, or even in Latin America, but it should now be profitable and on a firm footing for the future.