Singapore Airlines (SIA) has unveiled a bold new strategy to launch a new long-haul low-cost carrier which should allow the group to better compete against faster-growing rivals and regain some of the market share it has lost to budget airlines.

The SIA Group on 25-May-2011 announced it will establish a new wholly owned low-fare airline subsidiary. The carrier will launch services within one year and operate widebody aircraft on medium and long-haul routes. Details of the model, fleet and network are to be revealed over the next several months. CAPA expects SIA will borrow several elements of the long-haul low-cost model pioneered by Qantas subsidiary Jetstar, which includes business class seating and connections with its mainline sister carrier. Neighbouring long-haul LCC AirAsia X has also evolved to include a number of lie-flat seats and much of its success depends on its ability de facto to interline with short-haul AirAsia.

SIA is likely to use the new airline for a combination of adding capacity on existing routes and launching new routes which have a high mix of leisure travellers, with an emphasis on new destinations in India and China. The new airline will also be able to take over some or all flights on lower yielding routes routes with a low portion of business travellers, including some destinations in Australia and New Zealand - markets which contribute a large proportion of SIA's revenues. It will almost certainly also follow the Qantas/Jetstar approach of linking networks to gain maximum expansion.

Since this article was published, SIA has announced the carrier will be branded as "Scoot" and its first destination will be Sydney. For additional analysis of Scoot's strategy, see these additional pieces:

SIA's market share has been shrinking, while focussing on profitability. This marks a major refocus

The surprising, but also potentially far reaching, announcement could signal much more than merely another example of an Asia Pacific long-haul low-cost operation. For Singapore Airlines it marks a major refocus of its long term strategy - restoring growth and catering more effectively for the burgeoning leisure market. Over the last several years SIA has seen its share of its home market steadily drop as low-cost carriers have rapidly expanded. This trend accelerated in recent months as SIA's traffic has shrunk and load factors dropped, while low-cost carriers continued to expand rapidly and improve their load factors.

The flag carrier's strategy over this period has clearly been to prioritise profitability over expansion, often a sound approach. But in the fast growing Asian market this can be a risky long term option, leaving the way for other competitors to expand and grow their network strength. The new measure also appears to be a recognition that the flag carrier's longstanding focus on premium traffic (which must in turn mutually subsidise lower priced leisure travellers) is not in itself a formula for the future. The rapid growth is in leisure markets, while business travel - today somewhat uncertain - is expanding at a more leisurely pace.

SIA now has 35% of the market at Changi, based on scheduled capacity (seats) for May-2011. As a group SIA has a 41% share when including its full service regional subsidiary SilkAir. Archrival Qantas Group, including Jetstar and Jetstar Asia, has a 10% share. Low-cost airline groups AirAsia and Tiger now each have 7% shares. The Qantas Group, AirAsia Group and Tiger market shares are all expected to continue increasing this year at the expense of SIA Group, as they are all adding capacity at double-digit rates compared to a planned 6% capacity increase at SIA Group. 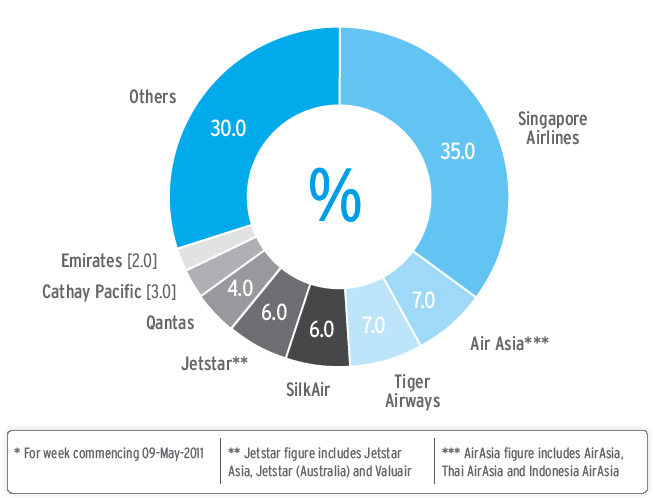 The new strategy promises major changes, both for SIA and for some of its main competitors

SIA’s new executive team, led by CEO Goh Choon Phong, is apparently not willing to watch the group stagnate and continue to lose market share. Establishing a long-haul low-cost subsidiary is a bold move but necessary for SIA Group to again grow. The message is that the carrier, despite its very high quality product, cannot grow profitably by only focusing on the top end of the market.

Launching a low fare operation should help SIA Group mitigate its risk. Currently the group has been putting most of its eggs in the full service, top end basket. As the economic downturn of 2009 and current market conditions show, the full-service market can be fickle. This is also an area where the successful Gulf carriers are increasingly making strong inroads.

SIA Group had an opportunity in 2004 to make a serious move in the low-cost carrier sector. But instead of launching its own low fare short-haul subsidiary, the Group decided more timidly only to acquire a minority stake in Tiger. Given Tiger's separate ownership, the LCC has been unable to play a complementary role to SIA - unlike Jetstar to Qantas. SIA has since steadily lost market share. Today to launch its own short-haul low fare subsidiary would be too complicated and risky. Tiger, AirAsia and Jetstar have this market well covered. SIA regional subsidiary SilkAir also has proven to be an effective, lower cost competitor in the short-haul market despite the growing budget competition.

SilkAir, while now smaller than AirAsia and Tiger in terms of market share at Changi, is a very effective regional feeder to SIA and still generates double the revenues, with a higher profit margin than Tiger's Singapore unit. But in order to fend off growing competition on medium-haul and long-haul routes the SIA Group needs to make a move.

Time is running out. Unlike its minority participation in Tiger, SIA needs to have control of the new carrier and use it as a wholly complementary operation as well as a feeder.

As is the case with Jetstar and the Qantas Group, the SIA Group plans to operate the new low fare airline as a self standing independent operation. It will be managed separately but major decisions will be coordinated. This contrasts keenly with the SIA-Tiger relationship where SIA has no control and only has three representatives on the Tiger board – two of whom are current SIA divisional vice presidents.

There is another aspect to the new strategy. While signalling an important strategic shift, the launch of the new carrier should also be seen as a retaliatory move in response to growing competition from archrival Qantas. The Qantas Group is rapidly expanding its low-cost operation in Singapore through Jetstar and is even reportedly considering establishing a new full-service carrier at Changi. SIA’s new low fare carrier will be able to compete more effectively against Jetstar, in particular on its new long-haul routes from Singapore, and potentially the new Qantas full-service carrier. Jetstar and Jetstar Asia for example now operate from Singapore to Auckland and Melbourne with at least two more long-haul low fare routes expected to be launched in 2H2011 and they are ideally positioned to capture much of the expanding Asian markets, where Singapore offers a valuable springboard.

SIA Group is likely also to use the new airline to try to retain its share of the Australian market.

Australasia now accounts for 17% of SIA’s revenues, more than any other region outside Asia. But in the key Australia-Europe market SIA is fighting growing competition from Emirates, the new V Australia/Etihad combination and Qatar Airways. Between them these carriers operate over 20,000 weekly non-stop seats to the Gulf, according to OAG, most of them competing directly in the Australia-Europe market. SIA, which dominated the sixth freedom Europe market a decade ago, still has over 30,000 weekly seats, but the equation is shifting fast. Qantas, even more exposed than better geographically placed SIA, is also being forced to step up its fight for this market, using Jetstar and potentially a new Singapore-based carrier to launch European routes.

This will hurt Qantas, as well as AirAsia X

SIA needs a lower-cost product in the Australian market to allow it to continue competing without sacrificing profits. Australia-Europe economy class yields are extremely low, a factor which has long since driven almost all of the European flags out. The new low-fare carrier could also potentially operate alongside SIA on its higher frequency sectors or, more straightforwardly, simply replace SIA on some lower yielding Australian routes such as Singapore-Brisbane. Assuming a product combination which includes some business class seating, this would still permit onward coordination with SIA services beyond Singapore, so that the new airline will be able to benefit from its parent's extensive network. A sufficiently low cost operation could also allow SIA to launch new Australian gateways such as Cairns.

A reasonably sized airline (no announcement on fleet size or composition has been made, but the new carrier will likely start off operating some of SIA's older model B777s) will be well positioned to target the fast growth markets of India and China, as liberalisation progressively opens new doors. Japan and Korea are also rapidly liberalising and the momentum of the ASEAN open skies multilateral agreeement is increasing by the day. These and the European markets are understandably being targetted by Qantas/Jetstar and AirAsia/AirAsia X, so a reinvigorated SIA combination will directly challenge these operations.

Overall, the new carrier would aim to improve overall group profitability by lowering its unit costs on less profitable routes, as well as expanding opportunities to enter new leisure markets, resulting in a better match to current yields - while freeing up SIA mainline aircraft for higher yielding routes.

More longhaul subsidiaries to come. Connectivity has been a key to success

SIA is poised to become only the second full service carrier in the world (after Qantas) to establish a long-haul low-cost subsidiary. The other successful combination, also based on connecting and complementing the parent carrier is that of AirAsia X, whose model has depended so much on the growing ability for low cost operators to network their operations. Thus the long-haul low-cost model has established a place in Asia as a viable entity, but only when a part of a group of airlines. Attempts to start independent long-haul low-cost carriers (such as Oasis Hong Kong, Viva Macau) failed where the Jetstar, AirAsia X (and on its way V Australia) models have been successful.

Outside the region, Air Canada also is now trying to secure union approval for a proposed long-haul low-cost carrier. The model however is unproven in the trans-Atlantic market, following the failure of Canadian-British carrier Zoom. A significant stumbling block in that evolution is in any event resistance from pilots' unions and inflight staff. The successful Jetstar subsidiary is, ironically, also a big part of the dissatisfaction among Qantas pilots - who are currently threatening to strike.

Most major Asian airlines were slow to seize the opportunities inherent in low cost subsidiaries during the past decade, often comforted and guided in their conservatism by European and American consultants who sought to extrapolate the very different conditions in those markets - where subsidiaries had failed. The result has been a series of partial commitments by carriers like SIA, Thai, Garuda, Malaysia Airlines, Korean Air, Asiana and, more recently ANA (in whose home market union resistance to LCC subsidiaries is a substantial constraint on this form of innovation), all of them more designed as reactive rather than expansive operations.

Typically conservative SIA has now signalled it is willing to make a more dramatic step - or is unable to avoid it - as Mr Goh looks to put his mark on the carrier and map out a bold new strategy to return to growth, restoring SIA to the forefront of the dynamic Asian airline industry.

Every other flag carrier in the region, and maybe beyond, will be watching with more than passing interest.

This will not be the last such example of a long-haul low cost operation in Asia's dynamic aviation market.