Russia is preparing to open up its aviation market to more low-cost competition, in a potential game changing move that could lead to significantly more local and foreign LCC capacity over the next few years. In its efforts to create an environment able to foster low-cost competition, various changes to aviation legislation are in the pipeline.

Leading Russian carriers have signified their interest in entering the low-cost market while foreign LCCs have stated their interest in operating to, from and within Russia. The upcoming changes to legislation could lead to a significant increase in LCC activity in the country, with forecasts of LCCs gaining up to 35% market share within 10 years.

The Russian Government is in the process of amending legislation to support the establishment and operation of LCCs in the country. In Nov-2012 the government reduced the minimum fleet size scheduled airlines are required to operate from eight to three aircraft with a capacity of at least 55 seats. This lowers the barrier to entry for LCC start-ups but several existing regulations that hamper the ability of airlines to follow LCC models have still not yet been lifted.

Changes to requirements regarding refundable tickets, inclusion of checked luggage and in-flight food and beverages are also reportedly to be made. In Nov-2012 the Russian Ministry of Transport proposed the cancellation of a regulation which requires airlines to carry 10kg of baggage per passenger for free. At the time the Ministry also said it was looking at allowing airlines to sell non-refundable tickets.

In an effort to boost internal competition and to reduce domestic fares, the Russian Federal Anti-Monopoly Service (FAS) said in Oct-2012 that the Russian Government may allow foreign LCCs to operate domestically in Russia for the first time. FAS head Igor Artemyev said: “The issue of inviting foreign low-cost airlines here and developing infrastructure for the creation of Russian low-cost air carriage is now being discussed very actively.”

It isn’t clear whether Russia is looking to allow cabotage or if it will only open up the market to foreign LCC groups to establish local affiliates or subsidiaries, potentially in partnership with Russian carriers.

In Jan-2013 the Russian Ministry of Transport stated it expects one Russian-based LCC to be launched in 2013 with a second to be launched in 2014 as a result of the changes to aviation legislation. Incentives for the creation of domestic LCCs are also reportedly being considered. The FAS estimates LCCs will achieve a market share of 30% to 35% of the Russian market within five to 10 years.

The current LCC penetration rate in Russia is about 2% of overall capacity (domestic and international combined), with airBaltic leading the 11 foreign LCCs operating to Russia. So far this year LCCs have accounted for about 3% of international capacity to and from Russia, according to OAG data. 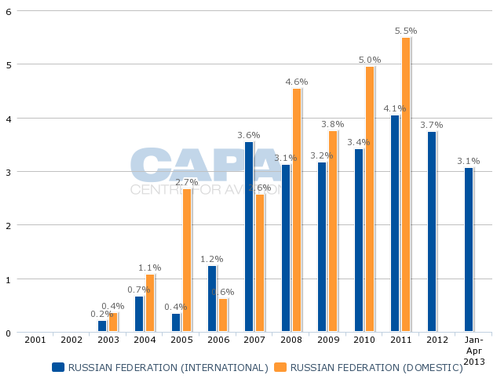 In only a very short period of time, easyJet has become the second largest LCC in the Russian market. The airline launched two routes to Moscow Domodedovo in Mar-2013, twice daily from London Gatwick and four times weekly from Manchester. The routes are both operated using 180-seat A320 equipment. easyJet’s plans to further expand its Russian network, which will likely result in it overtaking airBaltic as the largest LCC in the Russian market by the end of 2013.

While airBaltic’s capacity in the market has remained constant over the last six months, flydubai, Air Arabia, NIKI, Air One and Blu-Express have all had double-digit increases. Some of these capacity increases are only for the summer season but they are significant. For example, 200% and 294% increases for Air One and Blu-Express, 30% for NIKI, 15% for Air Arabia and 13% for flydubai.

In Oct-2012 these 11 LCCs operated approximately 22 routes to Russia with around 33,000 weekly seats. LCCs in the week commencing 29-Apr-2013 operate 24 routes and almost 42,000 weekly seats to and from Russia, according to CAPA and Innovata data. But that only accounts for about 4% of Russia’s total international seat capacity.

Hungarian low-cost carrier Wizz Air is reportedly planning to launch a Russian subsidiary, Wizz Air Russia, in 2014. The airline would be based in Moscow and have an initial fleet of three A320s. The new airline reportedly plans to carry 750,000 passengers in its first year of operations with a total of 2,500 to 2,700 flights.

The airline is reportedly planning to serve 15 to 20 destinations including Yekaterinburg, Samara, Nizhny Novgorod and Rostov. This would not be the first time Wizz Air has launched a subsidiary in a new country, with Wizz Air Ukraine currently based at Kiev Zhuliany Airport and Wizz Air Bulgaria previously operating from Sofia.

The main challenges for Wizz Air in Russia could potentially be similar to what it has faced in Ukraine. In Jan-2013 Wizz Air Ukraine CEO Akos Bus said the airline was seeking access to more Ukrainian routes and had applied for licences on multiple routes long ago, however, never received an official reply.

Wizz Air questioned the Ukrainian Government’s transparency and bureaucracy. Mr Bus said: “I don’t want to challenge Ukraine legally, but there is obviously something unfair going on. I want to be considered as a full-fledged Ukrainian carrier, because Wizz Air is ready to invest in the market heavily and what is happening in the market now is a single monopoly, which finally will result in fewer travellers of course.”

Wizz Air may find it easier in Russia as the Russian Government appears to be actively encouraging LCC growth from both within and outside the country. However there is always a risk that Wizz Air Russia or any new LCC in the country could struggle to gain the access needed to thrive.

While operating an extensive European network Ryanair has not yet ventured into the Russian market. The airline currently serves three countries bordering Russia (Finland, Estonia and Latvia) and could potentially serve several Russian destinations from both Ireland and from its many other existing bases throughout Europe. Ryanair’s new base at Bratislava Airport in Slovakia, which the carrier plans to open in 2014 or 2015, could also see some Russian destinations.

In Oct-2012 CAPA reported that Ryanair was seeking permission to launch Ireland-Russia services. The airline is also reportedly interested in operating domestic services in Russia and has held "exploratory" talks with Russian airports.

Russia’s leading carriers, Aeroflot, Transaero and UTair have said they are interested in establishing LCC subsidiaries. Aeroflot said it could establish an LCC subsidiary within six months after the relevant changes to Russia’s Air Code, which would allow for the establishment and operation of low-cost carriers in the country. Aeroflot CEO Vitaly Saveliev reiterated in Apr-2013 that Aeroflot is ready to proceed with establishing a low-cost carrier but said the necessary changes to aviation legislation still need to be made.

Transaero also indicated interest in establishing an LCC subsidiary depending on the necessary law changes to make such an operation viable.

UTair said it plans to establish a low-cost airline at Ermolino Airport following approval from the Russian Government to base a carrier at the airport. The airline said services could commence in late 2014 however additional construction at the airport would be necessary.

Ermolino Airport is located 80km from Moscow and previously exclusively served the Russian Interior Ministry and the Russian Defence Ministry. The airport is to be designated a dual purpose airport. Construction work on the airport’s terminal and reconstruction of the runway was due to commence in Apr-2013 in order to enable the airport to serve eight million passengers p/a.

The changes in aviation legislation should provide market conditions which are much more favourable than the conditions faced by Sky Express and Avianova. Each fare sold by these LCCs when they were in operation included 10kg of checked luggage as well in-flight food and beverages. Their tickets were also refundable.

The inability to offer unbundled fares and create ancillary revenue sources essentially made Russia’s previous LCCs full service despite marketing themselves as low cost. With the upcoming legislation changes, purer LCCs will now be able to operate. Therefore the threat of low-cost competition is a much more real threat to Russia’s established legacy carriers than it was when Sky Express and Avianova operated. This is likely the driver behind Aeroflot, Transaero and UTair expressing their interest in launching LCC subsidiaries.

The outlook for the growth of Russia’s LCC market is bright, with the Russian Government making changes to legislation to create a better operating environment and both Russian and foreign carriers stating their interest in establishing LCC operations in the country. The Russian FAS estimate of LCCs achieving up to 35% market share within 10 years would lead to a very different market dynamic in Russia compared to present.

The upcoming legislation changes will be awaited with much anticipation to see the responses from established Russian carriers. As seen in other Eastern European nations, LCCs have stimulated growth in air transportation and connected previously unlinked destinations.

Wizz Air has led the way in recent years with extensive networks in several Eastern European and CIS countries. The potential launch of Wizz Air Russia and Ryanair services to Russia as well as further expansion of easyJet’s Russian operation is likely to drive significant growth in LCC activity to, from and within Russia.