Slovakia is seeing growth in the low-cost carrier market with Ryanair expansion and Wizz Air reportedly planning to resume operations. LCCs already account for about 80% of seat capacity in Slovakia, with Norwegian Air Shuttle also operating to the small Eastern European country.

Slovakia is poised to see significant growth in aviation activity in the coming years with Ryanair stating its intention to establish a base at the country’s main international airport, Bratislava Ivanka Airport.

In early Apr-2013 Ryanair announced plans to operate 16 routes from Slovakia's Bratislava Airport in summer 2013 including one new service to Trapani in Sicily, Italy. The airline expects to transport over 800,000 passengers through Bratislava in 2013 and support over 800 associated jobs.

Ryanair CEO Michael O’Leary stated the carrier plans to establish a base at Bratislava in 2014 or 2015, initially with two Boeing 737-800s. Mr O’Leary said the base would assist the airline’s expansion into Eastern Europe.

Mr O'Leary said the airline plans to increase annual passenger traffic through the airport to over two million passengers, saying, “there is room to grow”. Ryanair could ultimately expand its fleet based at the airport to five to 10 aircraft.

Ryanair has operated to Bratislava Airport since Oct-2005. Bratislava is the airline’s only destination in Slovakia.

After Czechoslovakia split into the Czech Republic and Slovakia in 1993, national carrier Czechoslovak Airlines rebranded as Czech Airlines in 1995 and left Slovakia without a national carrier. Bratislava-based LCC SkyEurope Airlines launched operations in 2001 but shut down in 2009. The country has seen other local carriers launch however most have since folded. Slovakia has a population of approximately 5.4 million.

In summer 2012 DanubeWings operated services from Slovakia to Italy, Croatia and within France. Destinations included Venice, Zadar, Split and Rijeka. The airline’s domestic French operation included Angers Marce to Nice, Troyes Barberey to Bastia and Dole Tavaux to Bastia, Cambridge and Nice. The carrier has decided not to operate the French routes again in summer 2013.

Bratislava Airport is the main aviation gateway into Slovakia and handles the majority of traffic in and out of the country. Bratislava Airport’s location is its main issue, as it is only 70.5km (or approximately 45 minutes by road) to Vienna International Airport.

Aside from DanubeWings and Ryanair, Air Onix, Norwegian Air Shuttle and UTair also currently serve the airport. Ryanair is the dominant carrier at the airport with almost 84% of total scheduled capacity (21,900 seats per week), followed by DanubeWings with 5% of total capacity (1,400 weekly seats). When including statistics from Slovakia’s secondary airport, Košice Airport, Ryanair’s dominance decreases to 74% followed by Austrian Airlines and CSA Czech Airlines with 6% (1,800 weekly seats) and 5% (1,600 weekly seats) respectively.

As a result of Ryanair’s activity in Slovakia, the low-cost carrier market share in the country is currently around 80%. Ryanair’s network also dictates the country’s main markets are with Western Europe, accounting for around 90% of total seat capacity compared to about 10% to Central and Eastern Europe. 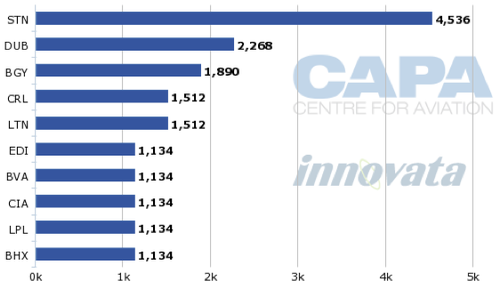 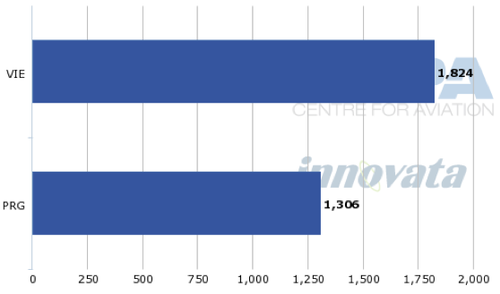 Bratislava Airport’s traffic over the past few years has decreased with passenger numbers decreasing by around 800,000 in four years. Passenger traffic reached 2.2 million in 2008, the last full year SkyEurope was operating, but has since steadily declined, reaching 1.4 million in 2012.

Despite the falling traffic figures, the airport has invested in its terminal infrastructure. In Jul-2012 the airport opened the second part of its new terminal building. The airport is now able to handle up to five million passengers p/a. In 2012 the airport revealed that it had increased revenue by 7% in 2011 despite the reduction in traffic and narrowed its operating loss to EUR2.5 million.

The airport will be very keen to secure further expansion. But even if Ryanair does increase traffic to and from the airport to two million annually, there will still be a lot of spare capacity at the airport. This will see room for further expansion by other low-cost carriers such as Norwegian Air Shuttle and Wizz Air. The airport could potentially market itself as a secondary airport to higher cost Vienna International Airport, although that strategy failed at SkyEurope, which added a base at nearby Vienna after discovering Austrians were reluctant to cross the border to fly.

Positive outlook for Slovakia with significant growth, led by Ryanair

There appears to be potential for Slovakia’s LCC market to continue to expand, particularly with Ryanair’s potential plans to establish a base at Bratislava Airport. The Irish budget carrier’s intention to use the airport as its base to spread its operations even further into Eastern Europe could see the airport become an important aspect of its Eastern strategy.

Meanwhile the resumption of Wizz Air services to Slovakia shows the potential for further routes from both Wizz Air and other European carriers, particularly LCCs, to expand their networks into Slovakia. Bratislava Airport’s proximity to Vienna could also see it emerge as an alternative to Vienna, a positioning which could prove attractive to LCCs such as Ryanair.