The regional UK airline market, led by flybe, is a highly competitive sector which has struggled through the global financial crisis. The state of the industry (and green populism) prompted UK Transport Secretary Philip Hammond, in late Jun-2010, to comment that domestic flying in the UK “will become, in time, a thing of the past”, with air services to be increasingly replaced by fast trains. Airlines, including British Airways, Ryanair and flybe quickly rejected the comments.

However, it is undeniable that the UK regional industry is undergoing a significant restructure, with flybe this month expressing its desire to expand its presence in Europe and acquire struggling European regional operators, Eastern Airways also this month confirming plans to acquire Air Southwest and Aurigny seeking a new owner after its takeover by Blue Islands was denied in mid-Sep-2010. Also in the past month, Ireland’s High Court appointed an interim examiner to Aer Arann after learning that the Irish regional airline was struggling to service debt obligations.

With flybe on an expansion drive and Lufthansa yet to decide what it will do with bmi (and its bmi regional and bmibaby subsidiaries) once the restructuring process is completed, the regional UK market will likely be volatile and challenging. Interestingly, flybe – back in Sep-2009, before Lufthansa announced its restructure plans for the bmi airlines – telling Lufthansa it was interested in acquiring “parts” of bmi. flybe was reportedly one of 12 interested parties in acquiring BMI or parts thereof.

flybe: One of three major European airlines to report profit during recession

flybe, Europe’s largest regional airline and the UK’s largest domestic airline, has stated it was “one of only three major European airlines to report profits throughout the global recession” with the privately owned carrier gaining market share as other carriers were more seriously affected by the global economic crisis.

The Exeter-based carrier reported a profit before tax of GBP6.8 million (a 57% year-on-year reduction) in the 12 months to Mar-2010, a profit before tax (after exceptional, integration and restructuring items) of GBP5.7 million (a notable increase from GBP0.1 million in 2008/2009) and an EBITDAR of GBP93.8 million (a 4.7% year-on-year increase for an EBITDAR margin of 16.4%). Revenues were maintained at GBP570.5 million, with the carrier adding that the volcanic ash cloud that closed UK airspace for nine days cost the privately-owned carrier GBP12 million (or 2%) of annual revenues in 2009/2010.

The carrier handled 7.2 million passengers in the financial year, slightly down on 7.3 million in 2008/09 but gained market share from shrinking rivals to become Europe’s largest regional airline. The carrier also became market leader in domestic services at London Gatwick and operates out of more UK airports than any other airline, with four times the number domestic routes of any other carrier.

The carrier has a 29.8% domestic UK capacity share, ahead of British Airways (19.9%) and easyJet (19.3%). easyJet significantly increased its UK presence with the acquisition of GB Airways from the Bland Group for GBP104 million in Oct-2007, with the acquisition being approved in Jan-2008. GB Airways at the time operated to 31 destinations with 15 A320/A321 aircraft, with a network covering 39 routes: 28 from Gatwick, six from Manchester and five from Heathrow. The acquisition increased easyJet’s prominence at Gatwick to operate 24% of the airport’s slots and approximately 8 million passengers across 62 routes. 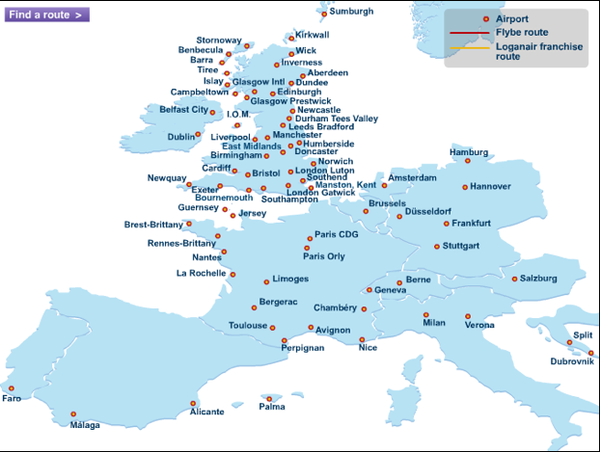 flybe added that trading for the first five months of the current financial year (to 31-Aug-2010) has been “strong”, with revenue and profit before tax ahead of the same period last year, before the impact of the Icelandic volcanic ash disruptions. The company added that it has seen “solid progress” in both ticket and ancillary yield.

Having gained market share in the UK, flybe CEO Jim French stated the carrier now plans a “string of exciting business developments which will accelerate the roll-out of the flybe proposition into Europe”.

"If you're making a profit during the recession, then that's the time to expand your business," he said.

He believes partnerships with other airlines are an ideal way to increase flybe’s presence and reputation in Continental Europe and is a far cheaper option than launching new routes itself. The developments are also aimed at consolidating the group’s position as a major European carrier and provide a solid platform for growth within Continental Western Europe.

As part of this expansion, flybe entered a codeshare agreement with Air France in Jul-2010 and a regional operations agreement with Olympic Air of Greece last year. The company is also in talks with Finnair about regional services in the Nordic region.

These moves will enable the carrier to continue its expansion into continental Europe, and to look at potential acquisitions of regional airlines in Europe after weathering the economic storm. While no details were released, CCO Mike Rutter stated the airline would target “distressed” European regional carriers. He added: "The initial outlay to buy such airlines won't be all that high but the costs will come as we restructure them. But we've done that before and we'll be happy to do it again."

However, despite the spate of agreements and its acquisition plans, flybe will adhere to its regional carrier model, with Mr French stating: "What we will do in Europe is regional, we will go into a regional market. We have no desire to be another BA, easyJet or bmi."

The carrier generally operates sectors of less than an hour with 85 seat regional aircraft. The carrier has enacted on a fleet rationalisation strategy, to operate a two aircraft model fleet, with the carrier’s fleet age currently under four years. flybe has also increased the average seats per aircraft by 15.1% since 2007/08.

Looking forward, flybe has the fleet to support its proposed expansion, with an order for up to 140 88-seat E175 and E-family aircraft made in Jul-2010. The first delivery of the firm orders is scheduled for Sep-2011 through Mar-2017. The firm order comprises 35 E175 aircraft valued at USD1.3 billion, 65 options (USD2.3 billion) and 40 purchase rights (USD1.4 billion – making USD5 billion in total).  See related article: “Flybe to the Moon...” Behind the UK airline's massive Embraer order.

Flybe in service and on order fleet: Sep-2010

Aurigny – another takeover bid by flybe?

In other regional airline news, Guernsey's Treasury and Resources Department in Sep-2010 stated discussions over the sale of Aurigny to Blue Islands have ended, as the Department concluded it could not be certain London Gatwick slots could be safeguarded under the planned sale. The Department added that it was uncertain whether the combined airline would become, and remain, profitable in the long-term.

flybe, back in Jul-2010, called for a full and independent inquiry into the sale of Aurigny to Blue Islands, with the carrier objecting to the sale without an open bidding process. “Flybe confirms that it would be prepared to enter into an open and transparent bidding process that it believes will present a better outcome than the smoke-filled-room solution being promised by Blue Islands.”

flybe and Aurigny both operate to Guernsey and flybe has made several bids for Aurigny since 2003, the last  in Feb-2010.

In contrast to the soaring fortunes of flybe, Plymouth-based Air Southwest on the same day as flybe released its financial results, announced it has been sold to Eastern Airways.

Eastern Airways reached an agreement in principle with Air Southwest’s parent company, Sutton Harbour Group – a regeneration and infrastructure company which, among other things, operates Plymouth City Airport – confirming the acquisition. The proposed agreement is still subject to regulatory approval, with legal completion expected in Oct-2010.

Sutton stated it took a decision to sell the carrier in May-2010 after the airlines’ operating profits fell by GBP600,000, with the carrier at the time stating it needed to dispose of the airline division” to “enable the group to resource core activity more effectively”. Sutton Chairman, Michael Knight, at the company’s AGM in Jul-2010 stated the company expected a "significant loss" on the disposal, commenting: "This loss is disappointing but the Board believes it is in the long-term interests of the company to focus on our strengths and to eliminate the volatility inherent in airline operations."

As part of the proposed acquisition, the Air Southwest brand will continue to be used in south-west England on services at Plymouth, Newquay and Bristol. Eastern Airways’ fleet will also increase to 35 aircraft with the addition of Air Southwest’s five 50-seat Dash 8 300 turboprop aircraft, the carrier operates a mix of ERJ-135s, Saab 2000s and Jetstream 41s.

Air Southwest is based at Plymouth City Airport and also bases aircraft and crew at Newquay Cornwall Airport, where the carrier accounts for more than half of aircraft movements.  It operates a network of services from Plymouth, Newquay and Bristol airports to destinations in the UK, Ireland and the Channel Islands and employs 150 staff. 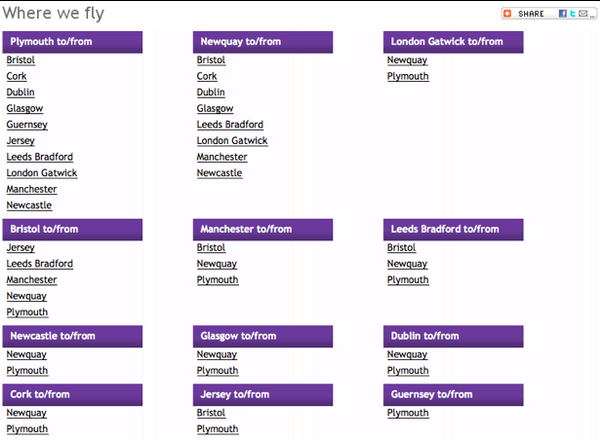 Eastern Airways was the logical buyer, with the two carriers in Feb-2010 announcing a strategic alliance enabling Air Southwest to join the GDS from Jun-2010 and broaden its sales channels. The carriers at the time commented that the agreement marks the “first stage of an evolving relationship between the two airline companies”.

In late Aug-2010, Ireland’s High Court appointed an interim examiner to Aer Arann, after learning that the Irish regional airline was struggling to service debt obligations as a result of sharp falls in traffic and the disruption and costs of the Apr-2010 ash cloud crisis. The decision gives Aer Arann court protection from its creditors for 70 days and allows the examiner to implement a restructuring plan.

Aer Arann has incurred an estimated EUR188.5 million in losses over the past two-and-a-half years, which the airline stated has "led to a deficit in shareholder funding of approximately EUR13 million at the end of July this year".

Michael McAteer of Grant Thornton has been appointed as interim examiner to the airline after it was announced that an independent accountant's report revealed the airline has a “reasonable prospect” of survival if certain steps are taken.

Meanwhile, Allied Irish Banks, a major creditor of Aer Arann, reportedly extended the Irish regional EUR1 million in fresh funding to allow for the appointment of an interim examiner. AIB is owed EUR3.9 million by Aer Arann, but stated that without the EUR1 million infusion the examinership would not have proceeded, as there would have been insufficient working capital to meet the airline's daily expenses.

Other major creditors include the Dublin Airport Authority, which is owed EUR2 million from the use of facilities at Dublin, Cork and Shannon Airports. Chairman Pádraig Ó Céidigh is now facing the possibility of suffering significant personal losses as he has given personal guarantees amounting to EUR1.2 million to the AIB as part of the terms of Aer Arann's overall funding facility from the bank.

The Chairman stated he has received interests from three investors, but declined to identify the parties and comment on the amount of capital the airline needs. Aer Lingus, meanwhile, has reportedly ruled out suggestions it is considering moves to acquire its franchise partner.

Europe and the UK's regional market is set see much more activity in coming months. Consolidation appears likely to spread across the market, as the weaker competitors either collapse or are absorbed into the stronger regional operations, led by flybe. There are 12 regional operators with less than 1% capacity share in the domestic market and, while some are in cosy niches, that sort of fragmentation of market share spells risk for the smaller entities, as economic conditions continue to be feeble.