SATA, the ambitious and successful airline based in the Azores chain of islands west of Portugal in the Atlantic Ocean, is seeking a role amongst Europe’s establishment of smaller, niche carriers. Driving this, the airline’s entry into IATA’s billing settlement plan is a further step towards an expanded presence. SATA has built up a number of interlines and is looking to expand those and increase two-way codeshares.

Its focus is bringing tourists to the Azores and is therefore a niche long-haul operator but it still faces competition from European LCCs. It is hoping that a product unbundling will help it compete more effectively in short-haul markets while codeshares will increase long-haul traffic, which it may grow with additional widebodies or next-generation narrowbodies that can cross the Atlantic. It has favourable geography for connecting traffic in some markets and would like to increase this incremental revenue.

Domestic services within the Azores are concentrated at Terceira and Ponta Delgada while short-haul international services operate mainly out of Ponta Delgada as well as Porto on the mainland, while long-haul flights are out of Lisbon, Ponta Delgada and Porto.

SATA started as a domestic operation but gained international rights through its 1994 acquisition of Oceanair.

The different AOCs have remained largely for historical, not operational, reasons. Domestic and European flights are scheduled but charter flights to Europe can be arranged on request. 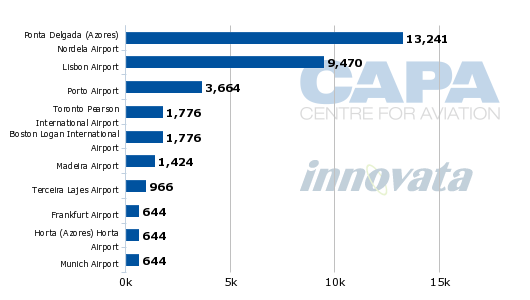 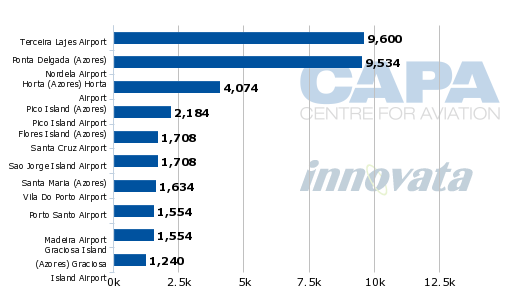 Some 80% of SATA's traffic is inbound tourists. Tourism to the Azores increased significantly from 200,000 in 2000 to 340,000 in 2011, making it a small but healthy tourist destination, and about half of the visitors are Portuguese. This compares to nearly eight million foreign tourists to mainland Portugal. For comparison amongst island destinations, the Seychelles receives 208,000 and the Maldives 958,000 visitors.

SATA is the largest carrier at Ponta Delgada and Terceira. Via its SATA International division, SATA also has a notable presence at Lisbon and Porto, but the majority of seat capacity at those airports is for flights to the Azores (domestic even though operated under the SATA International banner). 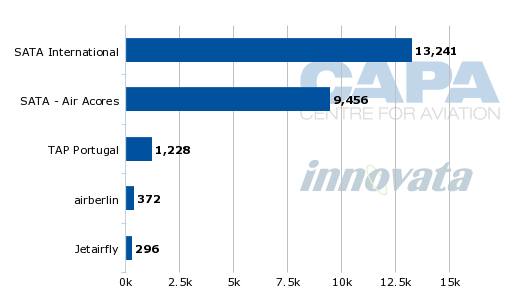 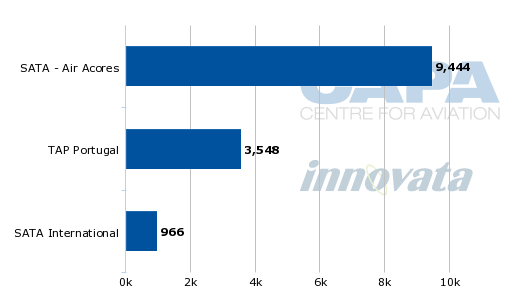 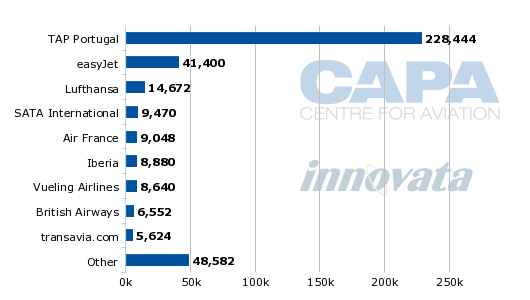 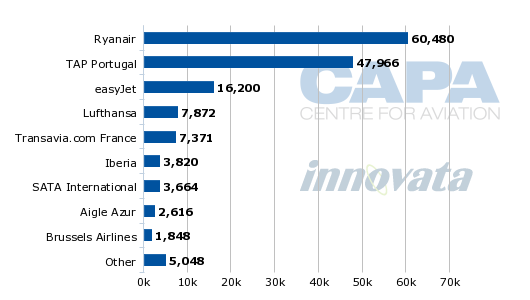 SATA competes with, but also cooperates with TAP

SATA is no stranger to the increasing complexity of airline partnerships. It cooperates and competes with TAP Portugal, the flag carrier the Portuguese Government has been trying to privatise. Cooperation is largely limited to areas of no overlap; TAP focuses on mainland Portugal while SATA on the Azores. TAP codeshares on long-haul flights as well as services between the Azores and Portugal. SATA codeshares on TAP's services to the Azores and Europe.

SATA CEO Antonio Menezes says his carrier has so far been unable to codeshare with TAP on flights between Brazil and Portugal, the bread and butter for TAP. TAP is the largest carrier by far between Europe and Brazil (and even larger Latin America), linking Lisbon and Porto with 11 cities in Latin America, all but one – Caracas – in Brazil. SATA's sole Latin American point is Salvador, served weekly from Lisbon, while TAP serves Lisbon-Salvador five times weekly. 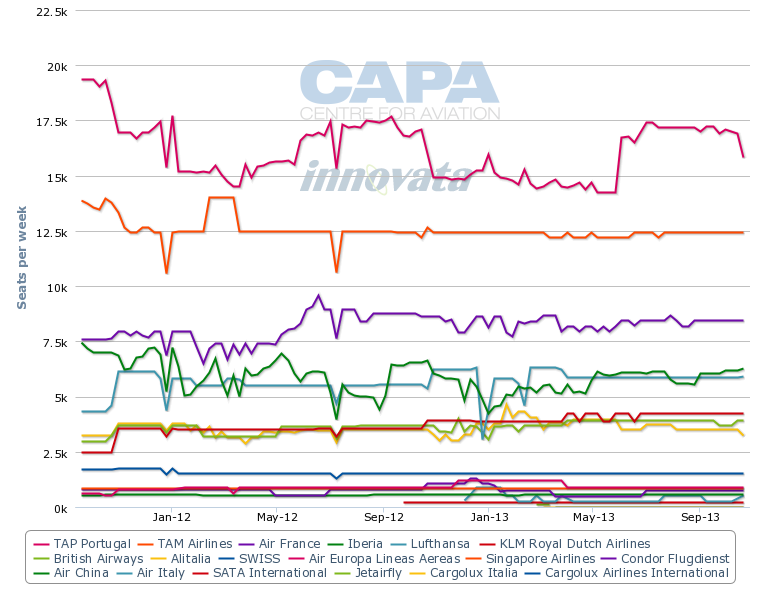 Salvador in eastern Brazil presents geographical advantages and is a hub for further Brazilian traffic via its interline with Gol (established in Feb-2013).

Gol is the largest carrier in the domestic Brazilian market and is also the largest largest at Salvador, from where it serves 14 destinations. 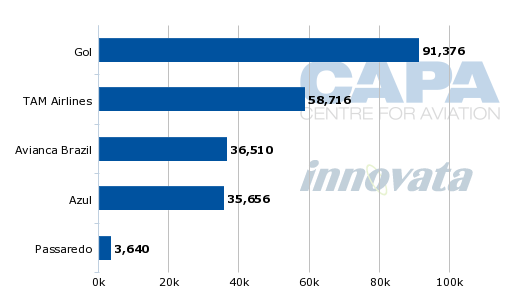 SATA and TAP have one-way cooperation across the Atlantic to North America (TAP codes on SATA but SATA does not code on TAP). Trans-Atlantic is a small market for both: TAP serves Miami three times weekly as well as Newark airport in the New York City area with six weekly flights.

SATA has flights to Boston and Toronto, both less than daily. SATA has slightly less capacity to North America than TAP in the small North America-Portugal market. 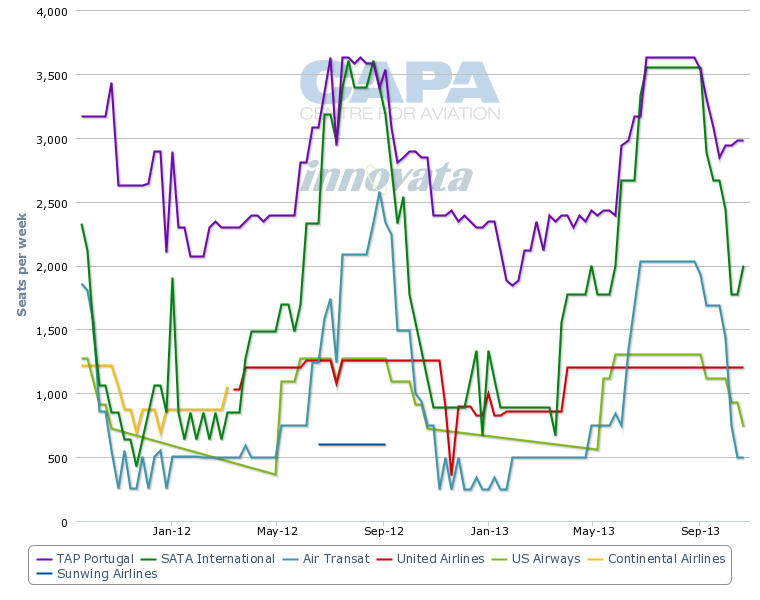 Between the Azores and continental Europe, SATA and TAP do not codeshare.

Fare unbundling will help increase competitiveness, but may be subsidised by long-haul

There is limited LCC presence in the Azores. There is no LCC (or even foreign carrier) presence at Terceira while Ponta Delgada has foreign carrier service from airberlin flying from Dusseldorf once a week and Jetairfly, serving Brussels twice a week in the European summer. SATA does not serve Brussels or Dusseldorf, but the existence of those carriers may preclude SATA's entry.

Besides lower operating costs, the LCCs have their immense scale to sell the Azores. SATA currently offers an all-inclusive fare that includes checked luggage, snacks/drinks/meals and other frills, but is looking to follow peers in unbundling its single offering to have multiple fare bundles that will allow it to show lower entry fares and also cater to passengers wanting a simpler offering. Moreover a lower cost base could see it enter new markets and increase tourism to the Azores, which has been stifled by a lack of affordable airfare options.

SATA’s long-haul network subsidises its short-haul network, a situation Mr Menezes views as unsustainable and wants to reduce. But significant cost-cutting to have a carrier rival an LCC in CASK terms can be challenging to achieve, especially with a small fleet that does not offer considerable scale. Certainly in the short/medium term, given the economic environment around Europe and SATA’s key markets in particular, it is hard to see short-haul being independently profitable. 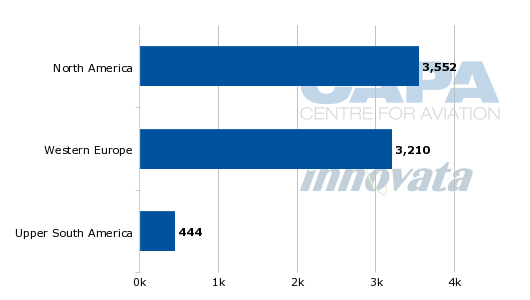 SATA's European services are largely outside the belt of troubled Eurozone economies. 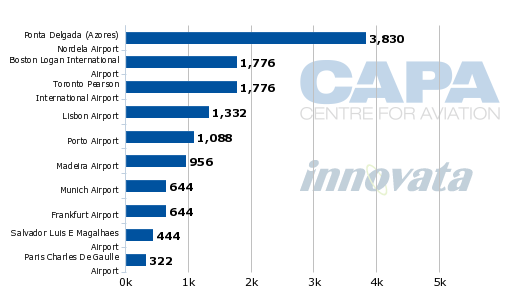 Fare unbundling can improve the revenue side in differing ways: some carriers use unbundling to increase volume and gain efficiency through higher load factors while others see bundles as a way to drive yield improvements, or both.

Mr Menezes wants to increase SATA’s load factor, which is around 75%. While perhaps an admirable figure a few years ago, LCCs are making considerable gains with high load factors: easyJet ended its year through Sep-2012 with a load factor over 90%. For easyJet that load factor continues to drive a virtuous circle of scale, while for competitors it is a vicious circle that allows easyJet to gain improvements just as competitors try to catch up.

Fare unbundling could be accompanied by product changes

With a move to a more hybrid European operation, following what is becoming the norm in Europe, SATA is also considering increasing the seating density of its A320s. SATA’s four A320s are in a two-class configuration of 12 in business and 149 in economy for a total of 161 seats.

In comparison, Iberia Express seats 177 in its A320s while Vueling has 180 seats (although a few are blocked for business passengers to have more room). easyJet’s workhorse A319, which has less cabin floor space, seats 156 – only slightly less than SATA fits in its larger A320s.

Connecting traffic is limited but a welcome niche

SATA is a minor player with connecting traffic (it lacks scale on destinations as well as frequencies) but welcomes connecting traffic for the incremental revenue and boost of load factors. SATA’s connecting strength is between the Americas and the southern part of Western Europe, mainly Portugal and Spain.

Its hubs in the Azores and Portugal mean routings around the Iberian peninsula are efficient, but to destinations further north in Europe the routings become inefficient. Northern neighbour Iceland has used its position in the Atlantic to efficiently link, primarily with narrowbodies, North America with Europe, and Northern Europe in particular, where it has a geographical advantage.

Alternatively, and more favourably if aircraft specifications pan out, SATA is considering next-generation narrowbodies (A320neo family, 737 MAX series) that could give it the range to fly from the Azores to other points in the Americas. North America is more likely given the shorter distance (SATA's existing Toronto service is 4,524km from Ponta Delgada) than South America (Salvador is 6,478km Lisbon; even shortening the route from Ponta Delgada would only make it 5,760km, although this is still considerably less than what some carriers operate with 757-200s, albeit in a less dense configuration).

Mr Menezes sees these potential aircraft delivering better unit costs not only due to their efficiency but in comparison’s to SATA’s older A310s, which were built between 1991 and 1992, according to CAPA’s fleet database. They could also facilitate trans-Atlantic expansion by opening new cities in the Americas, but this will be done cautiously.

SATA sees its potential and advantage on cities that Mr Menezes calls “North of New York”, which is already relatively far north. New York is unlikely to be a destination for SATA owing to the existing heavy competition to Europe and because the market is maturing in key cities through anti-trust immunity joint ventures that help make the strong even stronger.

Partnerships will be important to SATA’s long-haul growth as it seeks beyond gateway access. Given the size of the Azores, it is difficult for the carrier to sustain service to a long-haul point without feed, especially given the seasonal nature of its business.

SATA’s existing partnerships besides the codeshare with TAP are interlines including US Airways and Virgin America in the US, WestJet in Canada, airberlin from SATA’s German gateway in Munich, Aeroflot and Gol. The partners generally serve their home domestic markets but SATA is also interested in using Germany as its virtual hub for Central Europe. airberlin has a notable presence in Eastern Europe.

SATA would like to see more two-way codeshares, which would be more critical to it than its codeshare partners, as SATA would gain the selling and network power of the usually larger partner. Tapping foreign markets is critical for SATA’s growth given the limited population of the Azores.

Of particular importance to Mr Menezes is raising the Azores’ profile as a destination. SATA’s partners would not go away empty-handed; besides the usual incremental revenue gains, they could have a nice, albeit small, business from codeshares and the ability to sell a destination competitors could not.

SATA has made changes to support partnerships, including joining IATA’s BSP in Jan-2013. It also distributes on the GDS in Brazil.

Outlook: A niche and relaxed market, but not isolated from LCCs

SATA is advantaged and disadvantaged by its base in the Azores.

While a lack of international headlines about the locale (unlike Ibiza, for example) keep competition calmer, it also makes it challenging to gain the exposure needed to expand operations.

So SATA has a niche, but as continental Europe continues to mature and some markets reach saturation, the Azores – with a helping hand from tourism bodies – could become the next destination for LCCs. Further LCC competition would be challenging even if SATA unbundles and looks to increase seating density. A more competitive cost base could see expansion from SATA, which the Azores largely relies on single-handedly at present.

More emphasis on partnerships, especially given the need for foreign market access, is undoubtedly the right choice forward, but securing them will not be easy as carriers become more over-stretched by the day. This nimble and IT-savvy small carrier does however have the track record to date which suggests an ability to adapt effectively to new conditions. It will be no pushover.