Turkish low-cost carrier Pegasus Airlines is placing a big bet that Turkey’s market will liberalise over the next decade, enabling the carrier to expand its fleet to between 100 and 140 aircraft. Pegasus currently operates 43 narrowbody aircraft and has been negotiating since last year with Airbus and Boeing an order for 100 A320neos or Boeing 737-800 MAX. Pegasus CEO Sertac Haybat said on the sidelines of last week’s CAPA Airlines in Transition CEO Summit in Istanbul that he expects the 100-aircraft order will be placed within one month and deliveries will be spread out over six to seven years.

My Haybat expects the new aircraft will primarily be used to accelerate expansion of Pegasus’ international network, including to new destinations in the Indian subcontinent that are not within range of its fleet of current generation 737-800s. But he acknowledges international expansion will only be possible if bilaterals are liberalised.

Currently Pegasus faces bilateral restrictions in expanding to North Africa, Central Asia and the Middle East. It is not presently restricted to further expanding in Europe, which now accounts for 94% of Pegasus’ international capacity (seats), but the Turkey-Europe market is already saturated and highly competitive. “The problems with the bilaterals are the countries north, south and east of Turkey and also North African countries...It’s a challenge. What we are betting on is that this is only to get better,” Mr Haybat tells CAPA.

Pegasus currently only serves three destinations in Middle East (Beirut, Erbil and Tehran) and two in Central Asia (Tbilisi and Almaty), according to Innovata data. It presently does not have any services to Africa. 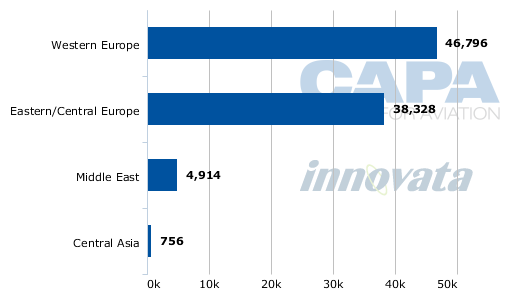 The bilateral restrictions have already forced Pegasus over the last several years to focus more on domestic and to a lesser extent European expansion. Mr Haybat says in recent years the carrier has been growing domestic traffic at a rate of 40% p/a while its international traffic has been growing at a rate of 20% p/a.

Mr Haybat says domestic expansion will slow to about 30% in 2012, due primarily to slower growth in Turkey’s economy. The carrier is also planning only modest expansion – in both the domestic and international markets – in the 2013 to 2015 time frame. Pegasus is essentially holding back on rapid expansion until new generation aircraft are available and until more traffic rights to African, Middle Eastern and Central Asian countries become available.

Pegasus currently operates 41 737-800s and two 737-400s. Mr Haybat says the carrier still has 10 737-800s left from its original 30-aircraft order, with four slated for delivery later this year and the remaining six slated for delivery from 2013 to 2015. He says Pegasus has the flexibility to lease additional aircraft in 2013 to 2015 but for now is planning slower growth for this period. “We have been cautious that there may be a new model coming in. We will probably slow down our growth for these years,” Mr Haybat explains, but adds: “It all very much depends on the economy for domestic [growth]. For international it all depends on the route rights.”

Once deliveries of the new-generation aircraft begin in the latter portion of the current decade (Mr Haybat expects slightly earlier delivery slots if the carrier selects the A320neo over the 737 MAX), Pegasus will have the option of phasing out some or all of its 737-800 fleet. Mr Haybat says it has not yet made a decision on whether to retain or sell the 40 737-800s it expects to own by the end of 2015 (the other 737-800s in its fleet are leased). He says this decision hinges on growth opportunities, particularly the rate of liberalisation in Turkey’s international market.

But even if Pegasus ends up phasing out its entire 737-800 fleet, the carrier is willing to commit to expanding its fleet to 100 aircraft by the early portion of next decade. This would result in expansion of both its domestic and international operations – although faster international expansion is expected as it is assumed the market will gradually liberalise. Pegasus is now the second largest carrier in Turkey, with a 26% share of capacity in the domestic market and a 9% share in the international market. 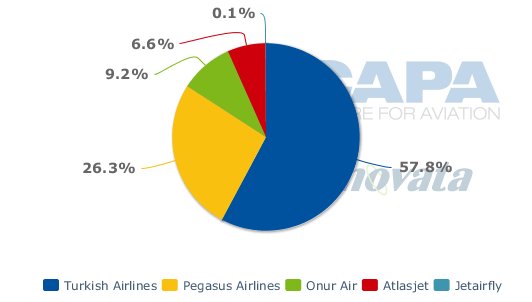 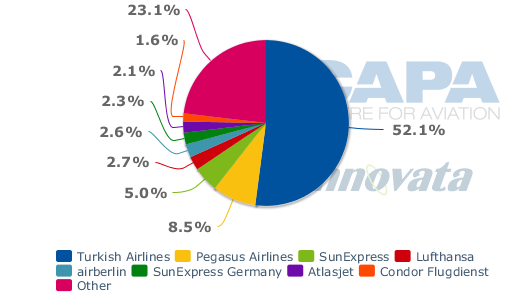 Pegasus has repeatedly complained over the years that when it comes to traffic rights, market leader Turkish Airlines receives preferential treatment from the Turkish government, which owns a 49% stake in Turkish Airlines. Pegasus, which is privately owned (the carrier for several years has talked about a possible IPO that is now on hold pending better market conditions) continues to fight for more traffic rights within the framework of the existing bilaterals. While this is most likely a losing battle, the carrier does stand to benefit if new bilateral or open skies agreements are forged, providing additional traffic rights for fast-expanding Turkish Airlines as well as Pegasus and Turkey’s smaller carriers.

While 94% of Pegasus’ international capacity (seats) is now allocated to European routes, the carrier would like to focus more on expanding to the east, where there is less competition, growing demand and a shortage of capacity. Pegasus is interested in opening up new destinations in Central Asia/the CIS, the Middle East and North Africa and adding capacity to the handful of destinations it now serves in this region. According to Innovata data, Turkish Airlines now accounts for a majority of capacity in all three markets while Pegasus currently only accounts for 3% of total capacity in the Turkey-Central Asia and Turkey-Middle East markets (see background information).

As an example, My Haybat points out that Pegasus is now restricted to operating only two weekly flights to Almaty in Kazakhstan, a destination it began serving early this year. Pegasus would be interested in expanding its service to Almaty but Mr Haybat does not expect the carrier will be able to secure additional rights in the near-term. Currently Turkish Airlines operates 12 weekly flights to Kazakhstan while Air Astana operates 13 weekly flights to Istanbul, according to Innovata data.

Turkey-Kazakhstan is a high yield and fast-growing market. Turkish serves two destinations in Kazakhstan – Almaty and Astana – while Air Astana links Istanbul from four cities in Kazakhstan: Almaty, Astana, Aktau and Atyrau. As only the second LCC to serve Kazakhstan (after Air Arabia), Pegasus is in position to stimulate demand in the Kakhstan-Turkey and greater Kazakhstan-Europe market. But its impact is being muted by the fact it can only operate two weekly flights to Kazakhstan.

Istanbul is also a big market for other Central Asian destinations including Afghanistan, Armenia, Azerbaijan, Georgia, Kyrgyzstan, Tajikistan, Turkmenistan and Uzbekistan. All these markets are within narrowbody range of Istanbul. But while Turkish Airlines holds traffic rights for all of them, Pegasus for now is completely shut out of Central Asia except for Georgia and Kazakhstan.

Pegasus is uniquely positioned to benefit as the emerging markets of Central Asia open up given the close economic ties between the former CIS countries and Turkey as well as the central location of its hub. Mr Haybat says 30% of Pegasus’ international traffic now connects at its hub at Istanbul’s Sabiha Gokcen Airport to domestic and other international destinations. If it is succeeds at building up its network to the east, Pegasus will be able to significantly increase its international-to-international connections business given its international network is now imbalanced with almost all flights headed to the west.

Istanbul-Almaty is now Pegasus’ longest route, which at over five hours is at the end of the range of the carrier’s 737-800s with full payload. Mr Haybat says the A320neo and 737-800 MAX would allow Pegasus to open new routes further east without having to invest in widebody aircraft (Pegasus is not currently looking at establishing a widebody operation). “The extra range can be used for India and Pakistan,” he says. “India is an interesting destination; Pakistan also.”

Mr Haybat says medium-range flights to Central Asia and potentially the Indian subcontinent are particularly attractive as they allow Pegasus to improve its aircraft utilisation. “The beauty of these flights is you can fly them at night. To Europe almost all airports have curfews,” he says.

Mr Haybat says Pegasus is now free to expand in Europe, at least during daytime hours, as Turkey has liberal agreements with most European countries. But the Turkey-Europe market is now over-saturated and Pegasus will likely need additional feed from the east to support more capacity into Europe.

Pegasus operates most of its international and domestic routes from its hub at Sabiha Gokcen. Unlike Istanbul’s main airport and Turkish Airlines hub Ataturk Airport, where Pegasus currently operates only one domestic route and has previously been denied attempts to secure additional slots, Sabiha Gokcen has no slot restrictions. But from a bilateral perspective, both Istanbul airports use the same set of traffic rights. As a result Pegasus has to fight with fast-expanding Turkish Airlines when new traffic rights become available.

While Pegasus operates under an LCC model with a single-class configuration and 30min turnarounds, it has several elements of a hybrid model including a transfer product with through check-in. Pegasus is also open to working with other carriers. It already has an arrangement with German’s Air Berlin but My Haybat says there are no plans to link up with Etihad Airways, which now owns a 29% stake in Air Berlin.

The codeshares with Air Berlin covers domestic and international flights operated by Pegasus and flights to Germany, Austria and Switzerland operated by Pegasus subsidiary IZair. Mr Haybat says IZair, which is now 98% owned by Pegasus, has entered into a joint venture agreement with Air Berlin that will result in Air Berlin becoming a shareholder of IZair. He says IZair, which has already been rebranded Air Berlin Turkey, will continue to focus on flights to Germany and other German-speaking European countries from the Turkish Mediterranean resort city of Antalya. There is no overlap between Air Berlin Turkey and Pegasus because Pegasus focuses on operating international flights from Istanbul.

Mr Haybat says IZair/Air Berlin Turkey is now in the process of phasing out its A320 family aircraft with Pegasus-sourced 737-800s. He says the carrier plans to end this year with six 737-800s. As these six aircraft are included in the Pegasus fleet plan, Pegasus mainline is slated to end this year with 39 737-800s and two 737-400s (the 737-400s will likely be phased out within the next couple of years). Mr Haybat sees IZair/Air Berlin Turkey as a niche carrier and not expanding for now beyond a six-aircraft fleet.

Most of the growth at the Pegasus group will be focussed at Sabiha Gokcen. Given the rapid growth in Turkey’s economy and the central location of its main hub, Pegasus is well positioned to become one of Europe’s largest LCCs. Pegasus is already the eighth largest LCC in Europe, based on current capacity (seat) data. But while Pegasus will certainly benefit from continued rapid growth in Turkey’s domestic market, the carrier will need better access to the international market to fully implement its business plan, including its ambitious fleet plan. 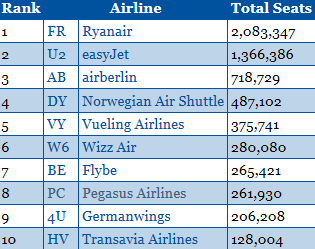 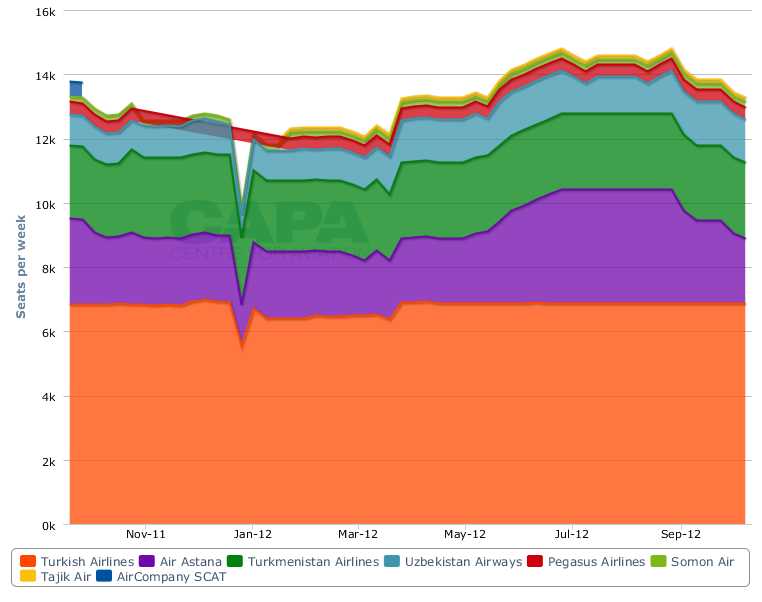 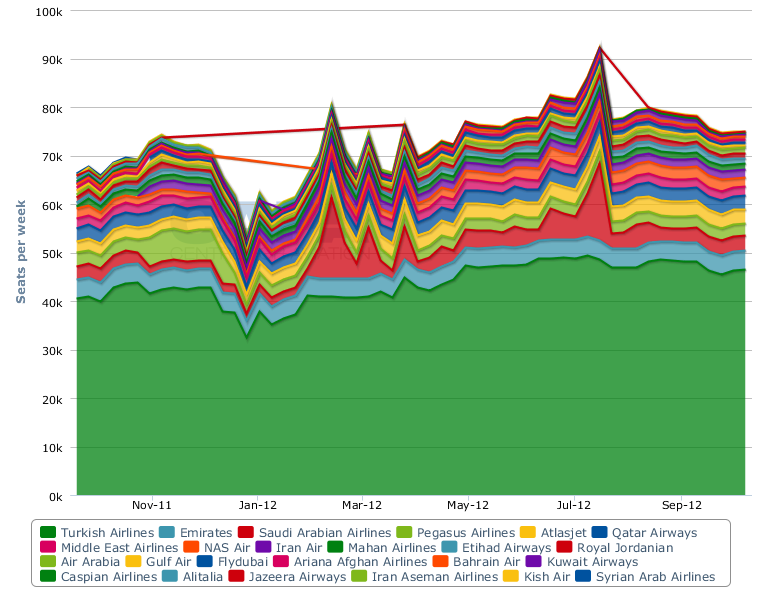 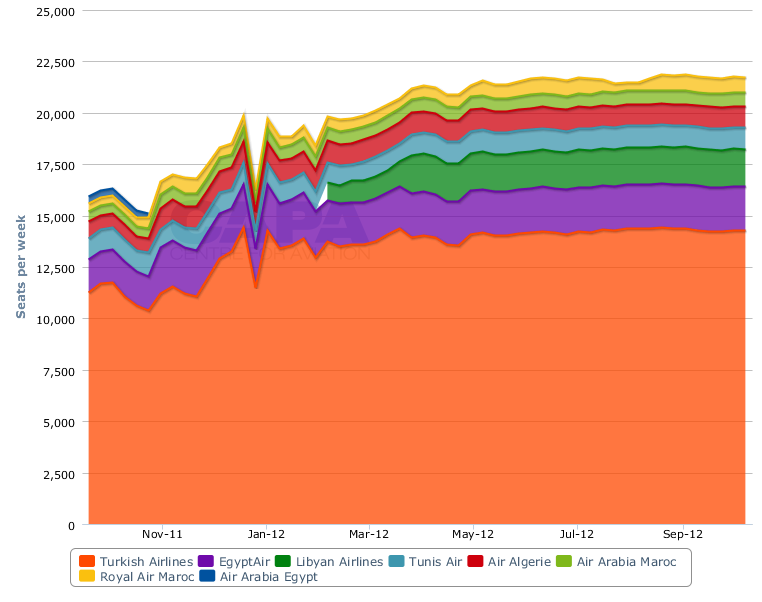