Turkey’s second largest carrier, Pegasus Airlines, is steadily expanding its network with a focus on nearby Eastern Europe as demand in the Turkish market continues to grow rapidly. Based at Sabiha Gökçen International Airport in Istanbul, the privately-owned airline operates an extensive European and domestic Turkish network while also offering some services to the Middle East and Central Asia. Until recently Pegasus’ focus has been primarily on its domestic Turkish and international routes to Western Europe, but this is beginning to change. Eastern Europe is becoming the airline’s main focus with a number of new destinations added in recent months.

Turkey’s second largest carrier after Turkish Airlines by capacity (seats), Pegasus currently operates a fleet of 35 Boeing 737-400 and 737-800 aircraft. Based on numerous media reports, the carrier has been in negotiations the last several months with Boeing and Airbus for an order totalling over 100 new narrowbody aircraft. The airline initially said it hoped to reach an agreement with a manufacturer by the end of 2011. While this didn’t materialise, a fleet order announcement could be imminent.

Pegasus also has a sister carrier, Izair, which was formed as a joint venture with airberlin in 2011. Izair is branded as airberlin Turkey and operates services between Germany and Turkey.

Atlasjet is also privately-owned however it is based at Istanbul Ataturk Airport. Ataturk is Istanbul’s main airport and is the hub for Turkish Airlines while Sabiha Gökçen is located further from the city and is primarily used by LCCs. Atlasjet offers about 43,000 seats per week domestically compared to about 171,000 seats for Pegasus, according to Innovata data.

At Ankara, Turkish Airlines and AnadoluJet have a much larger presence than Pegasus. Currently Turkish has about 150,000 domestic seats per week at Ankara, most of which are operated by the AnadoluJet unit, while Pegasus only has about 33,000 seats.

Internationally, the low-cost competition is even more intense in Turkey. But Pegasus is still clearly the leading LCC. 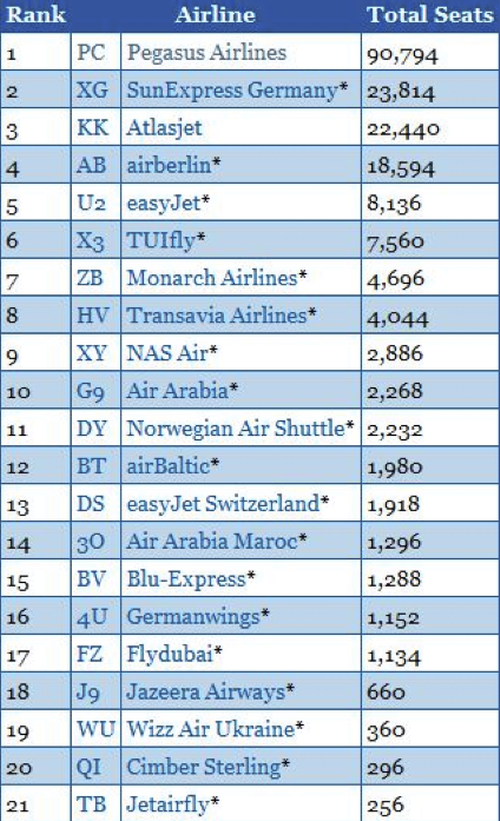 * indicates a foreign carrier
Source: CAPA - Centre for Aviation and Innovata
Note: Capacity from AnadoluJet, which is primarily a domestic operator but also operates some international services, is not included in this chart because all its flights fall under the Turkish Airlines TK code.

Pegasus Airlines has advantages over other European low-cost carriers in that it has a huge domestic market and is well positioned, given Turkey’s strategic geographic locations, for operating internationally to Western and Eastern Europe as well as to the Middle East. The domestic Turkish market while large only has Pegasus, Atlasjet and AnadoluJet offering low cost domestic services. Full service domestic competition is provided by Turkish Airlines and Onur Air but both carriers operate from Istanbul Ataturk rather than from Sabiha Gökçen.

The country’s domestic low-cost penetration rate is roughly 50%. According to Innovata figures, Pegasus has a 27% share of the domestic market and AtlasJet has a 7% share. The exact market share figure for AnadoluJet is unknown as its services fall under full-service parent Turkish Airlines. But Turkish overall has a 57% share of Turkey’s domestic market, including an estimated share of between 15% and 20% for AnadoluJet

Pegasus Airlines’ network has a largely domestic focus with 65.3%, or 171,136 seats each week, of its capacity currently attributed to domestic services, according to Innovata data. The Turkish economy has been growing rapidly, estimated at 9% in 2010. This in turn boosts the demand for domestic as well as international travel in Turkey.

Pegasus Airlines provides almost three quarters of the overall system capacity at its base at Istanbul Sabiha Gökçen Airport, followed by Turkish Airlines on 10.3% (includes flights operated by the AnadoluJet unit). 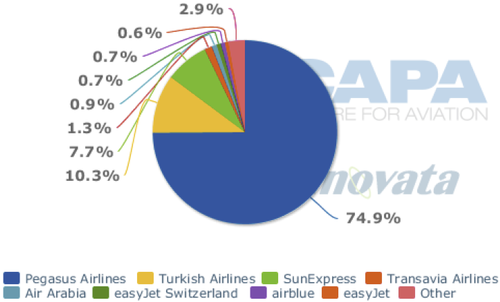 Source: CAPA – Centre for Aviation and Innovata
Note: Most of the Turkish Airlines capacity at Sabiha Gökçen falls under the AnadoluJet brand 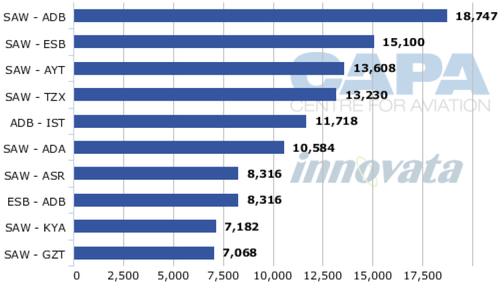 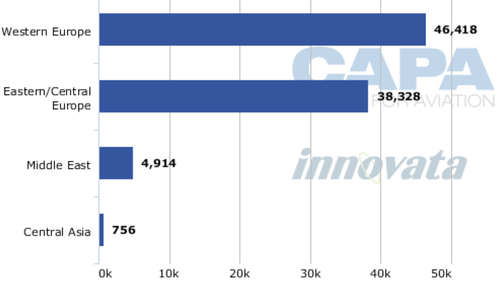 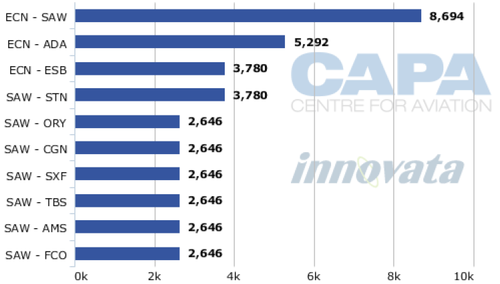 AnadoluJet operates about 10 international routes at Ankara (including seasonal routes). Pegasus also operates a few of these routes, including Cologne, Stuttgart and Vienna. Both carriers currently offer a similar amount of weekly international capacity at Ankara.

Turkey’s other LCC, AtlasJet, is mainly a domestic carrier with only one-third of its capacity allocated to international routes. AtlasJet’s international services operate from Ataturk and as a result it only competes indirectly with Pegasus.

Pegasus currently only has nine additional 737-800s on order but is looking to accelerate expansion through a massive over of about 100 new narrowbody aircraft. The carrier’s fleet is relatively modern with 33 737-800 aircraft and only two 737-400s. As a result any new order would primarily be for expansion purposes rather than replacement.

An announcement could come in the near future, once the airline has completed its evaluation of the 737MAX, A320neo and the Bombardier CSeries. As these new generation aircraft types are not yet available, Pegasus could also order current generation narrowbody aircraft to meet its interim needs.

Pegasus Airlines’ network focus is almost purely on expanding its Eastern European network. Domestically it has made little changes to its network with the launch Istanbul Sabiha Gökçen-Sivas service the only new domestic service recently launched. For its summer 2012 schedule the only Western European changes consisted of frequency increases on its existing services to London Stansted from Istanbul Sabiha Gökçen and Izmir.

In the latter half of 2011 and in early 2012 the airline has been focusing on developing its Eastern European network. New routes connecting Turkey to Bucharest (Romania), Donetsk (Ukraine), Erbil (Kurdistan, Iraq), Pristina (Kosovo), Skopje (Macedonia) and Almaty (Kazakhstan) were added onto its network.

Turkish Airlines shares Pegasus’ strategy on Eastern Europe and is expanding in the region not only with its own flights but also codeshare agreements with carriers in the region, most recently with Russia’s UTair. The airline is also planning to increase its influence in the region and is currently in talks with the Polish Government to potentially acquire national carrier LOT Polish Airlines. It already has a 49% stake in Bosnia and Herzegovina’s B&H Airlines, while having managerial control of the airline.

2012 may see further developments not just regarding Peagsus’ rumoured large aircraft order but also in relation to its initial public offering (IPO). In Jul-2011 Pegasus CFO Serhan Ulga stated the carrier was planning an IPO for early 2012 after being postponed due to unrest in the Middle East and high oil prices in early 2011. It is quite possible this will occur prior to any large aircraft order being placed, to solidify its financial position.

With its strong base, particularly due to its strong domestic Turkish operations, Pegasus Airlines is well placed to expand its international network from Turkey. Its Eastern European network is likely to expand further, but will be restricted somewhat until it expands its fleet.

Pegasus’ rate of expansion will depend on the continuing growth of the Turkish economy. National carrier Turkish Airlines is confident of continuing growth in its home market but has a stronger overall position as it by far the largest carrier in Turkey. Its large and fast growing hub also allows the flag carrier to pursue rapid growth in transit passengers.

Pegasus Airlines CEO Sertac Haybat and Turkish Airlines CEO Temel Kotil will both be speaking at CAPA’s Airlines in Transition CEO summit next month in Istanbul. For more information on the summit, go to www.airlinesintransition.com.