Slowly but surely Indonesia is privatising some of its smaller airports.

Indonesia is a country where some foreign operators and investors are wary to tread for a variety of reasons. But with the Lombok Airport deal having attracted a large number of interested parties, the conclusion of a 25-year concession to operate, maintain and extend the Batam Hang Nadim Airport on the Riau Islands, close to Singapore, will give more hope to the two state airport operating companies that they can find more takers Especially where a local and largely state-owned minority partner can be found, as in this case.

That partner will provide engineering resources to the major one, Incheon International Airport Corporation.

On the surface, other reasons why the airport needs to be extended quite so quickly are hard to identify. It may signify a change in emphasis which seeks to put smaller regional airports like this that are advantageously located into a position where they can help relieve the pressure on the creaking Jakarta Soekarno-Hatta Airport.

Towards the end of Dec-2021 PT Angkasa Pura I, one of the two Indonesian state airport operators, signed a management cooperation contract with Korea’s Incheon International Airport Corporation (IIAC) and Wijaya Karya, an Indonesian company that is involved in engineering and construction work in both Indonesia as well as abroad. The contract was for the construction, expansion and operation of Batam Hang Nadim Airport over a 25-year period.

Batam Hang Nadim is the ninth busiest airport in Indonesia and 316th biggest in the word (out of 3782) as measured by seat capacity.

Previously, in Mar-2021 IIAC's consortium with PT Angkasa Pura I and Wijaya Karya had won the tender to expand, improve and operate Batam Airport under a 25-year contract. It is reported that most of the bidders had requested a 50-year concession term.

This new cooperation will include maintenance of the airport's existing passenger terminal and new passenger terminal, as well as management of its new cargo terminals and a master plan for a logistics ‘aerocity’. The airport will also be developed to become a wider aviation destination hub and a logistics and cargo hub in western Indonesia.

The project will require an estimated investment of KRW600 billion (USD530.3 million) and initial works should be completed by 31-Dec-2023. Current capacity is five million passengers per annum and is expected to increase to eight million, then eventually to reach 20 million per annum.

These works have clearly been delayed pending a deal with a foreign company with the required expertise.

It was almost five years ago in May-2017 that the airport revealed less ambitious plans to launch an IDR5.9 billion (USD448 million) expansion project in Jun-2017.

• Develop a second terminal with capacity for 10 million passengers p/a;

And in 2016 the airport’s management had stated that the expansion was considered “urgent” due to increasing passenger traffic. It appears that it took an inordinate length of time to prepare the tender contract.

Even before that though (in 2015) it had become evident that IIAC was willing to use internal capital to fund Batam Hang Nadim Airport’s redevelopment project to suit its agenda. At that time IIAC presented a proposal covering its operational and financial management programme for the airport. IIAC was then seeking to manage the project jointly with BP Batam (Batam Free Trade Zone Authority, the airport’s operator), an organisation which was the first to propose the terminal extension in its own right.

Even before then there had been discussions about a new terminal, dating back to early 2015 when both Garuda Indonesia and Lion Air Group submitted expressions of interest to construct one. At that time the government was specifically issuing requests for EoIs to airlines operating at the airport to participate in the project.

Indeed the project can be dated back as far as 2014.

The airport has been considered an alternative solution to congestion at Jakarta!

At the time, Batam Airport was being promoted as a "far more economical" solution to addressing traffic congestion at Jakarta Soekarno-Hatta Airport, the philosophy being that the airport “could serve flights to Indonesia without going through the middle and east of Jakarta, and vice versa". There was also talk at the time of building a second runway after the number of passengers exceeded 15 million per year.

It is not evident why this project should have taken so long to come to fruition other than the observation that IIAC is quite particular about which contracts it agrees (see comments at the end), and that Indonesia is one country that operators and investors from other countries are sometimes wary of.

In the 2018 CAPA Airport Privatisation & Finance Report the following observation was made:

“There seems to be a piecemeal and uncoordinated approach to privatisation in Indonesia, involving the expansion of the two state airport operating companies PT Angkasa Pura I and II (especially II, which is to be privatised itself) and the encouragement of private sector interests, especially those in the southeast Pacific region. Some European and other western investors still tend to be wary of opportunities in this part of the world, where the business culture is quite different and messages about prospects and the procedures to handle their sale or concession tend to be mixed.”

Looking at the development of passenger traffic at the airport from 2014, when its expansion was first mooted, there does not seem to be any particular cause for concern that traffic growth was outstripping the infrastructure significantly, and even that the airport is the only international one in the region (Riau Islands). 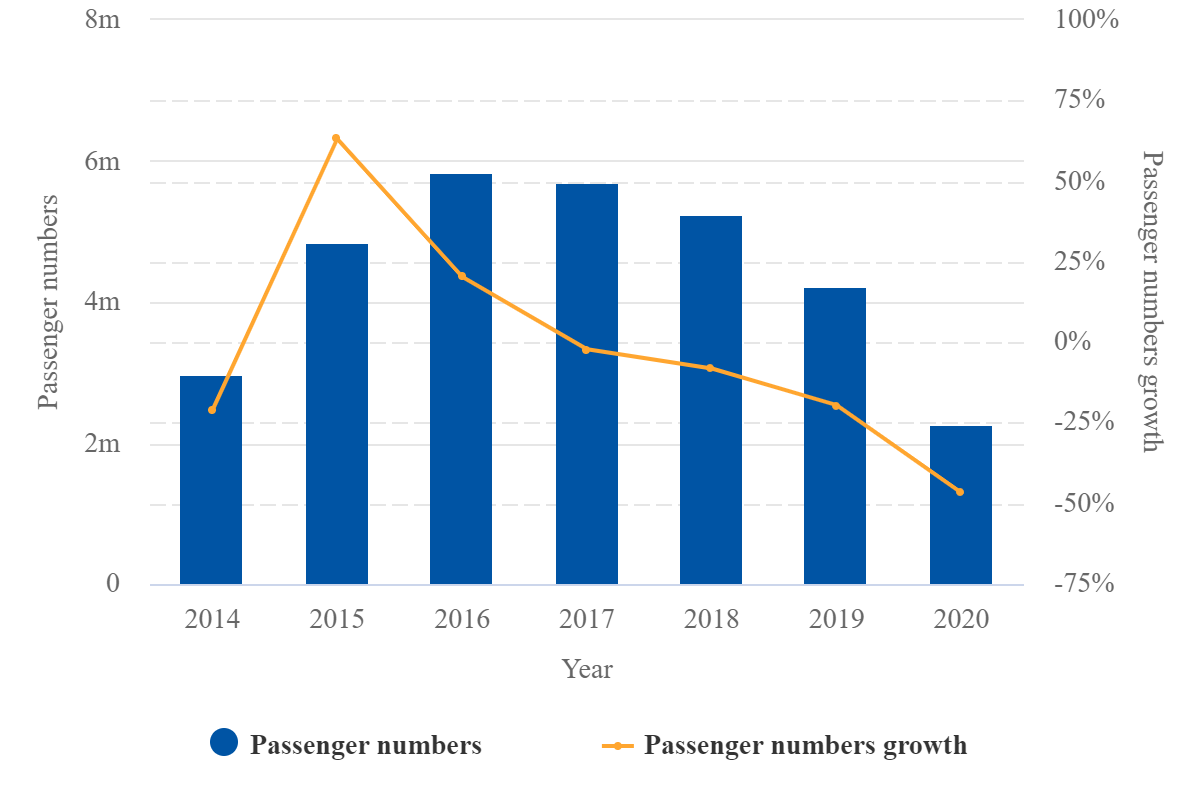 Pandemic impact less severe than it was at Jakarta

The impact of the pandemic in 2020 was severe, with traffic reducing by 47%, but that is 18 percentage points less than what it was at Jakarta’s Soekarno Hatta Airport (statistics for 2021 are not yet available). 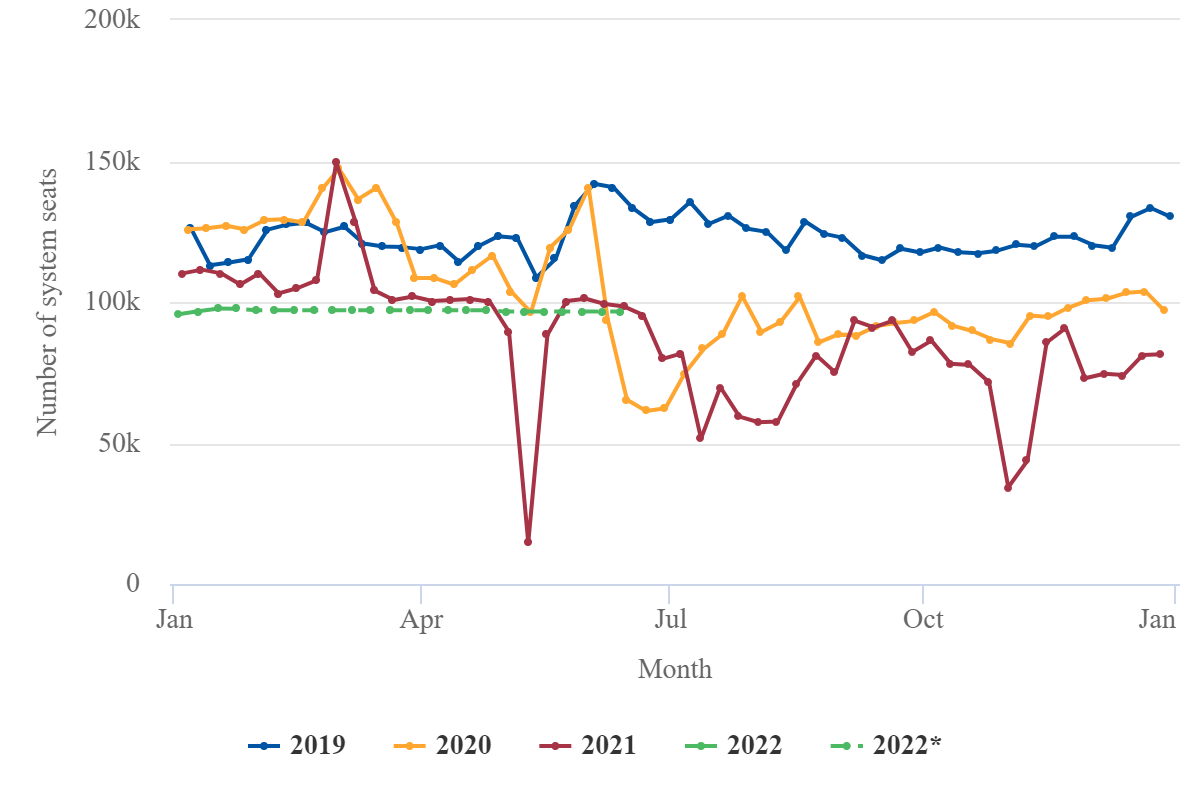 * These values are at least partly predictive up to 6 months from 10-Jan-2022 and may be subject to change.

The airport is entirely domestic presently, which means by consequence that all the airlines are also domestic and local ones, led by Lion Air, which has close to 50% of the capacity. 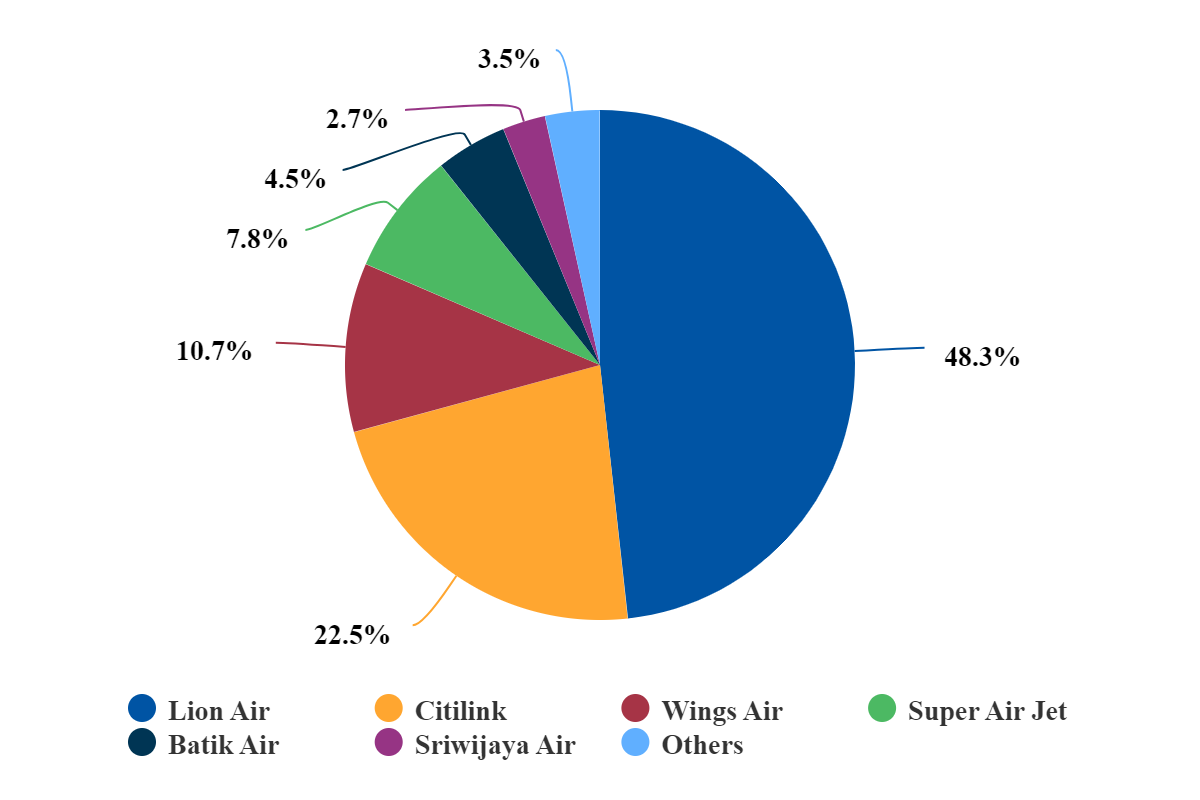 Not unexpectedly, low cost carriers (LCCs) predominate, with almost 90% of seat capacity – something that the management might need to redress by restoring some balance if it is to become a genuine gateway to the Indonesian archipelago. It isn’t unknown for an island or remote peripheral city airport to be used as a gateway into a country by way of a star-shaped hub/spoke network, such as Sal Airport for the Cape Verde Islands (historical and present-day) and Kaliningrad for Russia (historical).

Another perceived weakness at the airport is the absence of airline alliance members. Together they account for only 2.5% of capacity, and through only one alliance (SkyTeam).

Turning to how the airport is utilised on a daily/hourly basis, it works within a defined window between 0600 and 1900; limited hours, but capacity is well spread out during those hours with no empty blocks. The chart below is for Thursday 13-Jan-2022. 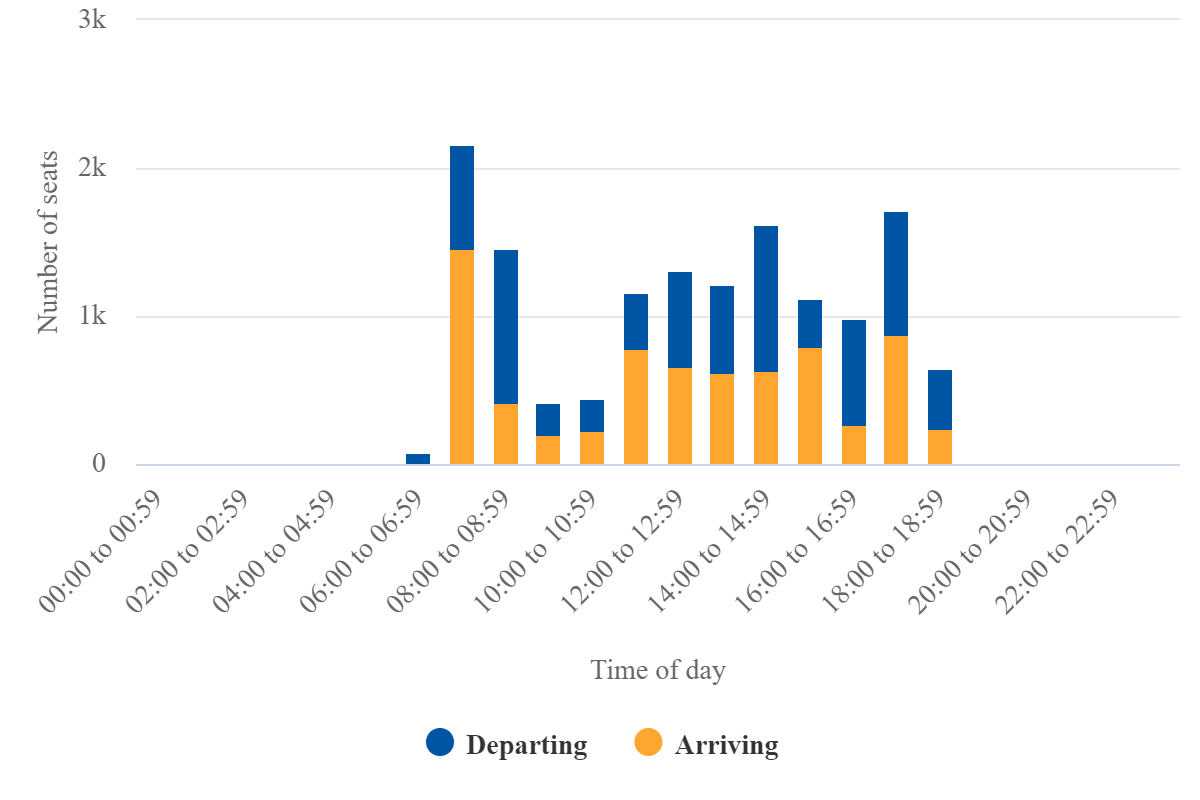 IIAC is selective where airport investment and management is concerned, but its portfolio could be much bigger. Incheon Airport majors on environmental sustainability

IIAC is very selectively active in airport management, development and investment. Apart from Seoul’s Incheon Airport itself, it manages no other airports in South Korea; that task goes to Korea Airports Corporation, which oversees 14 airports, including Seoul Gimpo, which is predominately a domestic airport.

Apart from the Batam Hang Nadim Airport IIAC's activities are limited to Kuwait, where it won a short five-year concession to operate Terminal 4 in 2018 and where it subsequently announced its intent to bid on the Terminal 2 currently under construction; and Khabarovsk Novy Airport in Russia where it acquired a 10% stake in 2011, marking its first equity investment in an overseas gateway.

That is not to say that IIAC lacks ambition.

The question is: why has IIAC not won more bids out of the many it has pursued?

One clue to that question may come from comments made when it pitched for the Belgrade Airport concession, when IIAC’s CEO commented that the airport needed to improve revenue generated from non-aviation related services, noting that just 20% of revenue was derived from that source. He also referred to the need to make Belgrade more “ecologically minded, in line with global standards.”

Incheon Airport majors on environmental sustainability. Its corporate sustainability report is an extremely comprehensive, professional 66-page document which sets the sustainability master plan within the context of “the arrival of New Normal Era due to COVID-19 and paradigm change in the aviation industry“. The Batam Hang Nadim Airport will no doubt be subject to the same rigorous demands.

Wijaya Karya, the minority partner, comes from a quite different background.

The CAPA Global Airport Investors Database comments that “it is likely only to be involved in Indonesian privatisations, but there could be more of them”.