Iran, with an educated populace of 80 million, becomes a potentially major aviation force

Following the lifting of nuclear-related sanctions against Iran in Jan-2016 a potentially significant global aviation market was once again reopened to the world, after almost four decades of isolation.

Iran has huge pent-up demand and potential after almost 40 years of isolation from the international community. Despite the isolation, Iran’s economy approaches those of Turkey and Spain. The country has a young population with a median age of 28 years, which is active on the internet and social media (despite restrictions), having strong aspirations to travel and engage with the rest of the world.

Soon after sanctions were removed Iran Air placed firm orders for 118 Airbus aircraft and 20 ATRs, with options for a further 20 ATRs. Private airlines are estimated to have an interest in entering into commitments for a further 100 aircraft over the next twelve months. The fact that Iran’s airlines have continued to operate and expand during the lengthy period of isolation is testament to the resourcefulness of their people and their commercial and technical skills.

Geographically, Iran enjoys almost the same aviation advantages as the Gulf states; for now, that is where the similarities end. But the potential is self-evident.

Willingness to re-enter the aviation world is one thing; restarting the financial wheels is proving a challenge, as the overhang of restrictions remains and lack of certainty is slowing moves towards renewal.

Boeing has since obtained a licence to discuss fleet requirements with Iranian airlines and the company sent a delegation to Tehran in Apr-2016 for preliminary talks.

Canada has lifted sanctions against Iran, enabling Bombardier to pursue opportunities in the market, while Embraer has reportedly also been in discussions with one or more operators. Meanwhile the existing order book is impressive. 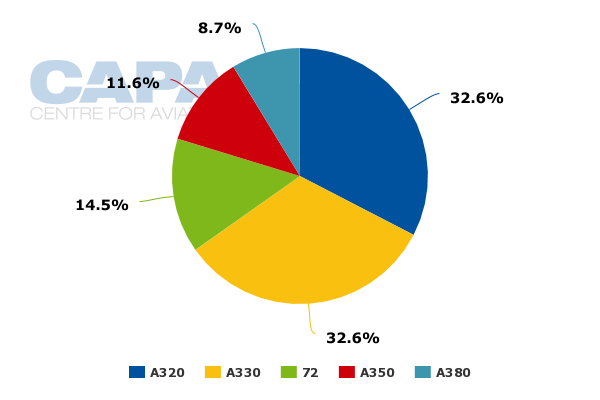 However, despite strong interest from Iranian airlines and aircraft manufacturers to work with each other, there has been limited progress in terms of execution of transactions. Even the Iran Air order is yet to proceed to a final agreement, due to challenges in identifying a bank that is prepared to finance the transaction. However, based on some reported recent progress, the order may be concluded by Jul-2016.

A key hurdle remains the continuing uncertainty about the impact of US sanctions, particularly on financial institutions. Most US sanctions remain in place despite the implementation of the nuclear deal, because they relate to human rights or terrorism concerns.

Since 1979 Iran’s economy and aviation industry have faced international sanctions, the scope of which has progressively increased over time. The most recent and widespread sanctions were introduced over the last decade in response to the alleged military dimensions of Iran’s nuclear programme. Relations between Iran and the West deteriorated during Mahmoud Ahmedinajad’s tenure as the Iranian President, between 2005 and 2013.

However, in 2013 the incoming President Rouhani signalled a more moderate and conciliatory approach. After two years of intense negotiations between Iran and the five permanent members of the UN Security Council plus Germany and the EU, the Joint Comprehensive Protocol of Action (JCPOA) was signed in Jul-2015.

Iran has huge pent-up demand and potential after almost 40 years of isolation from the international community. With a population of close to 80 million people and a middle-income average per capita GDP of around USD16,000 on a PPP basis, this is a market of great significance. Compared with the economy of Myanmar – which was the previous ‘new market’ to come in from the cold – Iran’s economy is almost five times larger.

At close to USD1.4 trillion on a PPP basis (IMF 2015), Iran’s economy is larger than Australia's and approaches those of Turkey and Spain. The country has a young population with a median age of 28 years, which is active on the internet and social media (despite restrictions), having strong aspirations to travel and engage with the rest of the world.

But sanctions have left their aviation market weak

Decades of sanctions have had a significant negative impact on Iran’s aviation sector, which is underdeveloped relative to comparable markets. For example, the economies of Turkey and Spain are 15-20% larger than Iran's, but their fleet sizes are 100-200% greater.

And this is not simply a function of their large inbound tourism flows, as there is a similar variation in the number of domestic seats per capita.

Comparison of Iran’s Economy and Aviation Sector with Selected Markets

(*Iran’s commercial fleet is officially around 230 aircraft, however only 160 were estimated to be in service as at 01-Mar-2016 – due to airworthiness issues.)

Due to sanctions on the acquisition of new aircraft the average age of Iran’s commercial fleet of 230 aircraft is one of the oldest in the world, at around 24 years. As of 16-Jan-2016, up to 40% of the Iranian commercial fleet had been grounded due to the inability to acquire parts or contract maintenance services. However, with the lifting of sanctions a number of these grounded aircraft have been returned to service.

Given the challenges of operating an ageing fleet without the ability to access full maintenance services, it is perhaps not surprising that Iran has a poor recent safety record, with seven fatal accidents since 2009.

In addition to wearing away the ability to keep aircraft in the air, sanctions have imposed legal and operational obstacles in virtually all of the day-to-day activities of airline management, particularly for international operations. Iranian airlines have faced difficulties in procuring even the most basic supplies, from fuel to catering.

The fact that Iran’s airlines have continued to operate and expand during this period is testament to the resourcefulness of their people and their commercial and technical skills.

Passenger traffic has continued to expand – despite sanctions

Despite all of the challenges the passenger traffic handled by Iranian airports has doubled over the past 10 years. The acceleration in growth in the past couple of years is expected to continue following the lifting of sanctions.

Iran’s airports handled an estimated 48 million passengers in the 12 months to Mar-2015, of which domestic movements account for just over 75%. (The latest airport-wide breakdown is only available for the prior year, 2014.) There are more than 50 airports in the country but the top 10 handle 90% of traffic.

In fact, the cities of Tehran and Mashhad alone represent 65% of the total traffic. Tehran has two airports, Mehrabad which is primarily domestic, and Imam Khomeini International Airport which is exclusively international.

The development of a domestic-international hub at Tehran will be difficult if traffic continues to be distributed in this manner. The two airports are situated on opposite sides of the city, with substantial connection times.  For the time being, this increases the likelihood that international traffic to/from regional centres in Iran will connect over offshore hubs in Dubai and Istanbul on foreign airlines, subject to bilateral access being permitted. 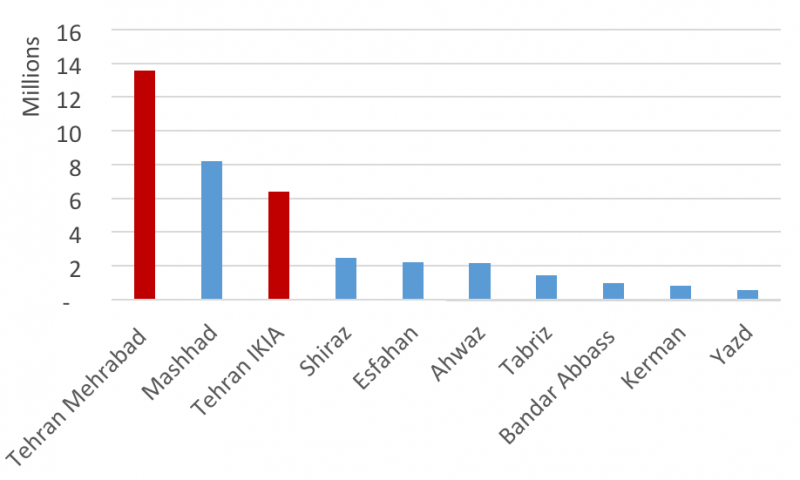 Three Iranian airlines dominate, but there are multiple operators

Iran has 15 scheduled airlines, although most are relatively small. Mahan Air, a private carrier, has the largest fleet at 51 aircraft, followed by Aseman Airlines and Iran Air with 35 and 34 aircraft respectively. All other airlines have fewer than 15 aircraft in their fleet. 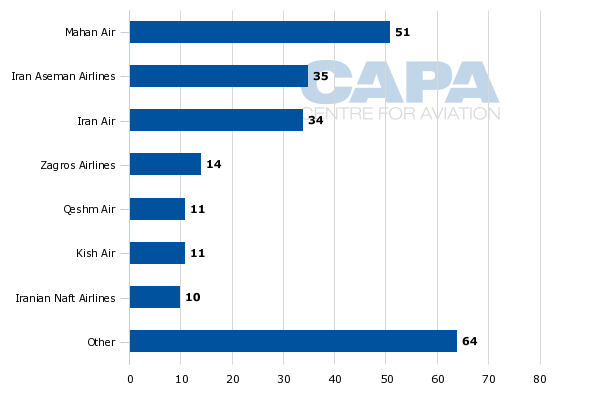 In FY2014 the three largest airlines accounted for 56% of domestic traffic and 78% of international traffic carried by Iranian airlines. 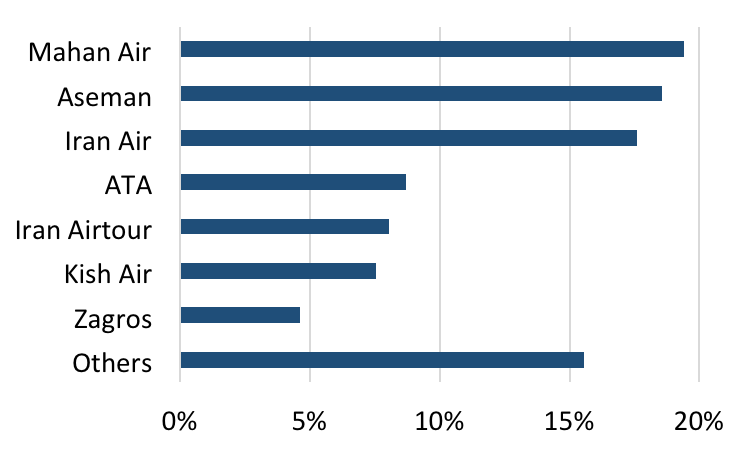 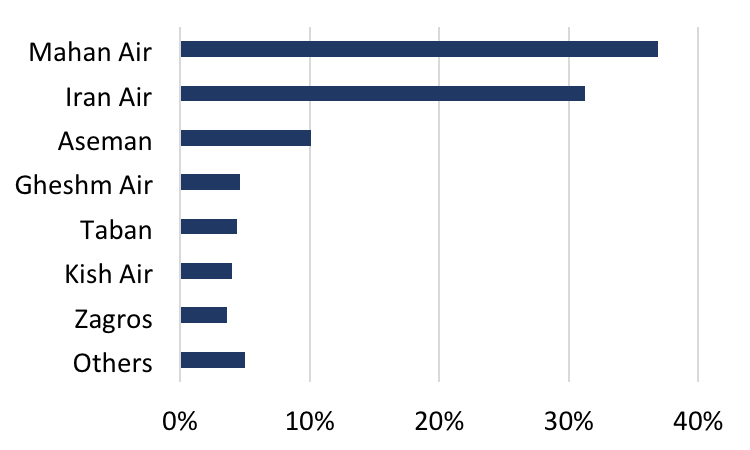 Foreign airlines are estimated to have a market share of 40%, with Turkish Airlines, Emirates and Qatar Airways the three largest shares by capacity. In 2016 several European airlines have announced plans to launch or increase capacity to Iran, including Air France, Austrian Airlines, British Airways, Lufthansa and Eurowings.

The projections are encouraging. Malaysia based AirAsia X is to be one of the first LCCs from outside the Middle East to go into the market, when it commences operations later this year. Group CEO Kamarudin Meranun said on 23-May-2016 there had been encouraging inbound and outbound forward bookings for AirAsia X's Kuala Lumpur-Tehran service and (Thailand JV's) Thai AirAsia X's Bangkok-Tehran service. Mr Kamarudin said, "We are confident we can stimulate further demand as we are the only low-cost carrier operating direct flights from Kuala Lumpur and Bangkok to Iran."

The lifting of sanctions is expected to drive significant growth in business and tourism flows.

Outbound traffic has significant potential but will continue to be constrained by the difficulties that Iranian nationals face in obtaining visas to many destinations. Countries which offer visa-free or relatively liberal access to Iranians will remain popular.

Turkey is the most popular destination, with 1.7 million Iranian visitor arrivals in 2015, however recent security issues in Istanbul and Ankara are subduing demand. 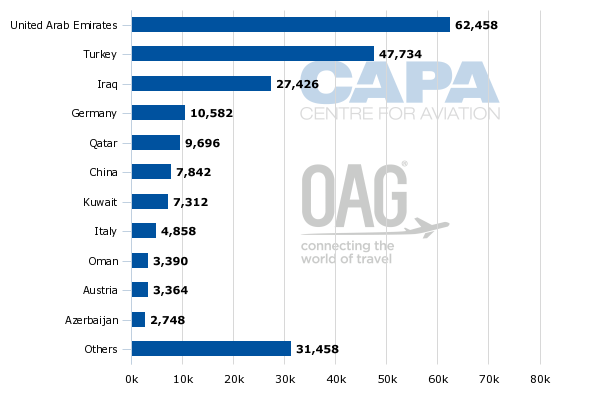 Iran: a remarkable similarity to India 12 years ago - that market has grown fivefold

Domestic issues and geopolitics remain significant risks. Despite the strong showing by moderate parties in Iran’s parliamentary elections in Feb-2016, conservative elements continue to exert strong influence. At the same time the possibility of renewed tensions exists, to a degree dependent on the outcome of the US general elections.

Any developments that lead to Iran choosing not to comply with the JCPOA could lead to a snapback of sanctions. Despite their adherence to the agreement so far, Iran already believes that the process is not working as expected because financial institutions remain cautious about participating in business transactions, even if those transactions are authorised.

Further, within the aviation sector itself there is yet to emerge any clarity on the policy direction for the industry. Many operators have been weakened by sanctions and will find it difficult to adapt to a fast-growth, competitive environment. This may be compounded by capacity constraints in the areas of skills and airport infrastructure

Nevertheless – the potential is huge. As a benchmark there are very strong parallels with the size and shape of India’s aviation sector when it embarked upon its most significant liberalisation and expansion phase in FY2004.

*Latest traffic data available for Iran is for FY2015

Today, 12 years later, India’s passenger traffic is almost five times larger than it was in FY2004.

If Iran were to follow a similar path there are clearly significant opportunities for Iranian aviation and for the international aviation community.