While IAG's major competitors are confronted with precarious labour and financial situations, the Group continues its strong march towards profitability. Its 1Q2015 results provided a first ever positive operating profit in the seasonally weak 1Q. Currency movements (mainly the strong USD) inflated both revenue and costs, with the net impact only very mildly negative. The swing to an operating profit from a loss in 1Q2014 was driven by unit revenues rising more rapidly than unit costs (or, excluding exchange rate effects, unit revenue falling less rapidly than unit costs).

At the individual airline level, British Airways returned to 1Q operating profit for the first time since before the global financial crisis and both Iberia and Vueling narrowed their margins of loss. What's more, in spite of Vueling's teething problems at its new Rome base, its rolling 12 month return on invested capital is above the group's 2016 target of 12%.

IAG as a whole and its other two subsidiaries remain short of this hurdle, but the group has reiterated its 2015 operating profit target and is confident it can reach its 2016 goals.

IAG made an operating profit of EUR25 million in 1Q2015, up from a loss of EUR150 million in 1Q2014. This was its first positive 1Q operating result since IAG's creation in 2011, although non-operating charges led to a net loss after tax of EUR26 million (86% narrower than the EUR184 million loss a year earlier). Revenue increased by 12.0% to EUR4,707 million.

All three airlines increase their 1Q profits; Vueling was most profitable on 12 month basis

According to IAG's methodology, the group's return on invested capital for the last four quarters was 8.4% versus its target of 12% in FY2016. IAG expects both the group and each of its three airlines to beat this 12% target through the cycle from FY2016.

In the rolling four quarter period to 1Q2015, Vueling's RoIC was 13.1%, already ahead of the target. Iberia's RoIC was 5.5% and BA's was 8.5% for the last four quarters, highlighting the considerable gap that still remains for the two legacy airlines to achieve the 12% target. 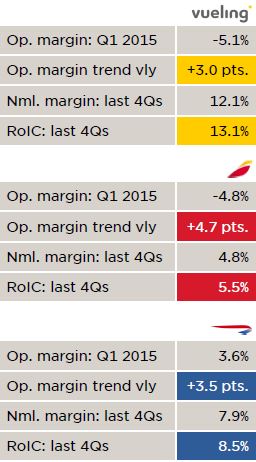 Cargo tonne kilometres fell by 4.2% for the group. 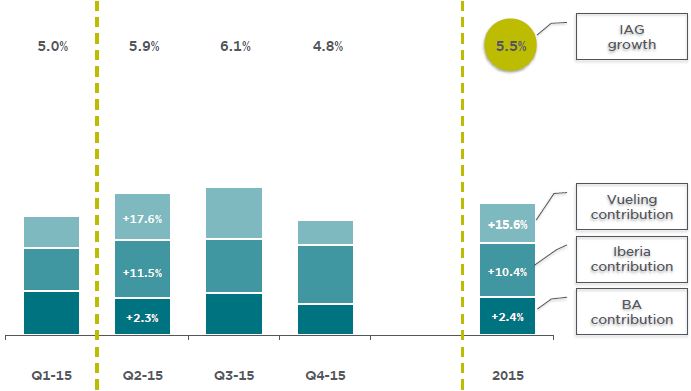 Each airline's growth has a different basis

The source of ASK growth for each airline in the group varies. IAG's growth plans for 2Q2015 are broadly indicative of its plans for the year. From this, it can be seen that BA's growth is driven mainly by aircraft gauge (eg BA's A380 fleet will increase by three to 11 over the course of 2015).

Speaking to analysts on a conference call to discuss the 1Q results, IAG CEO Willie Walsh said that BA's A380 operations had been positive both from a customer and revenue point of view, but that the benefit was specific to BA's network and to a limited number of routes. This means it is unlikely that IAG will take more than the 12 A380s already ordered.

For Iberia, the majority of the capacity growth comes from restored routes that were suspended during its restructuring (Montevideo, Santo Domingo, Havana, Amsterdam, Istanbul, Berlin), with a small contribution also from increased frequencies (Mexico, Panama, Tel Aviv and Tenerife). Iberia's growth is partially offset by discontinued routes, aircraft gauge and shorter sector length.

Vueling's capacity growth is mainly driven by new routes (from Rome), but higher frequencies on around 60% of its routes also play a meaningful role. Mr Walsh told analysts that he was comfortable with Vueling's high capacity growth, since its track record showed that it was "very strong on maturing routes". 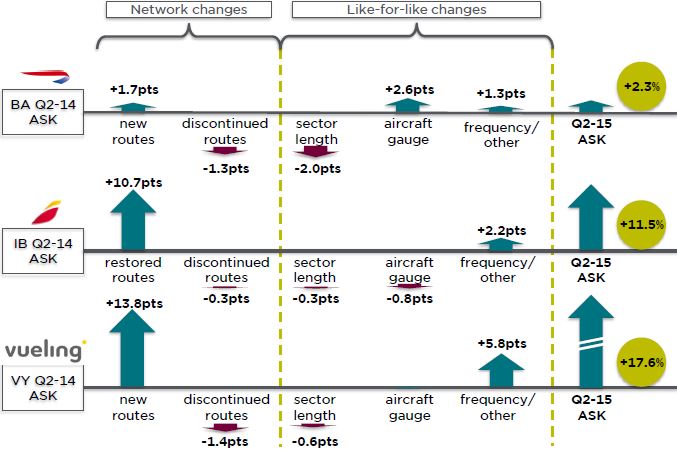 The group's 1Q2015 ASK growth was highest in Europe (+12.2%) and in its domestic markets (+10.3%, including UK, Spain and Vueling's domestic Italian network from Rome FCO), mainly reflecting Vueling's expansion. The group also grew rapidly on routes to Latin America (+9.0%), primarily due to Iberia's restored routes, and Asia Pacific (+9.0%), due to BA's increase in capacity to cities such as Tokyo (Haneda) and Seoul.

Capacity to North America was stable (+0.5%), while smaller aircraft on BA routes to India were the main driver behind a 3.2% ASK cut in Africa, Middle East and South Asia (AMESA). 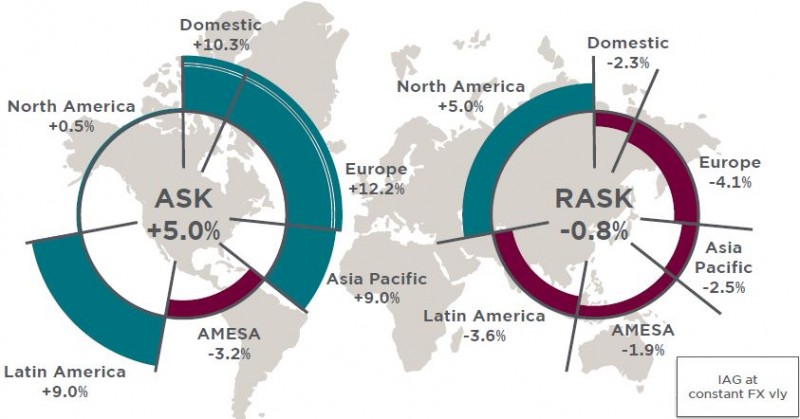 Passenger unit revenue (RASK) at constant currency fell by 0.8% across the group in 1Q215 (+6.9% as reported). This indicator varied by region, with the biggest falls in Europe (-4.1%) and Latin America (-3.6%). In Europe, price competition remains intense as LCCs continue to increase their share.

In Latin America, the fall in RASK at constant currency was mainly due to BA, whose network is more focused on the leisure-oriented Caribbean, rather than Iberia. CFO Enrique Dupuy said on the conference call with analysts that Mexico and Colombia ha been strong markets in unit revenue terms, while Brazil and Argentina had been weaker. Venezuela was also weak, but this was now a small market after capacity cuts.

Mr Walsh told analysts that there had been no irrational behaviour from Latin American competitors. Referring to IAG's biggest European competitor in this region, Mr Walsh said of Air France-KLM, "Look at their performance in their first quarter. That's an airline that will struggle to compete with Iberia, with their cost base".

Unit revenue at constant currency was also down in Asia Pacific (-2.5%), although Mr Dupuy said Tokyo Haneda was performing well in spite of the capacity increase and that he was comfortable overall with the balance between capacity growth and unit revenue in the region.

Mr Dupuy said that RASK weakness in the group's domestic markets was due to the UK and also Vueling's still developing Italian network from Rome, while the Spanish domestic market preformed well. Mr Walsh called the Rome market "competitive", but said that Vueling's position was "encouraging" and in line with expectations.

IAG's best performing network by unit revenue in 1Q2015 was North America, where constant currency RASK increased by 5.0%. This reflects tight capacity growth and the performance of BA's premium cabins on the North Atlantic. The only IAG North American market experiencing difficulties is Houston, which has been hit by the lower oil price and where unit revenues suffered a double digit fall, according to Mr Walsh.

IAG's total revenue grew by 12.0% in 1Q2015, faster than ASK growth, with passenger revenue increasing at a similar rate (12.3%). Total unit revenue (total revenue per ASK) grew by 6.7%, but this was boosted significantly by currency movements. At constant exchange rates, total RASK was down by 1.1%. Exchange rate changes provided a total revenue benefit of EUR348 million in the quarter.

Cargo revenue fell by 1.6%, less than the 4.2% drop in CTKs. According to Mr Dupuy, the performance of IAG Cargo is benefiting from its market position on the North Atlantic and its commercial relationship with Qatar Airways. The outbound Asia to US cargo markets were performing well and played to IAG's strengths.

Operating costs were up 7.6%

Unit cost (CASK) increased by 2.5%, inflated by currency movements. At constant exchange rates, CASK fell by 5.3%. Ex fuel CASK was up 5.9% as reported, but down 2.7% at constant exchange rates. Currency movements added EUR356 million to costs, a little more than offsetting the benefit to revenue, so that the net impact on operating profit from foreign exchange was negative by EUR8 million.

Whether as reported or at constant exchange rates, RASK outperformed against CASK and this drove the improvement in operating profit.

IAG's recent decision to pull BA and Iberia out of the Association of European Airlines in favour of the European Low Fares Airline Association (where Vueling is already a member) highlighted a difference of opinion with a number of other European airlines over the liberalisation of the industry.

In particular, IAG's attitude towards Gulf carrier competition has diverged sharply from that of groups such as Air France-KLM and Lufthansa. IAG's growing commercial relationship with Qatar Airways, and the investment by Qatar Airways in 10% of IAG's shares, contrasts with the anti-Gulf rhetoric of the other two big European legacy groups.

Mr Walsh argued on the 1Q2015 conference call with analysts that this divergence of opinion reflected differences in financial performance. Certainly the competition would be happy to aspire to IAG's profitability levels. This is a debate that not only grips European airlines. US airlines have also raised the temperature of this topic with a report into alleged subsidies provided to Gulf airlines.

Mr Walsh expressed disappointment that the pace of market liberalisation was slowing, but did not expect any rolling back of the process in the form of increased protectionism.

Referring to the group's offer for Aer Lingus, Mr Walsh said that IAG continued to engage with the Irish government over the assurances in connection with Heathrow slots. Calling the discussions "very constructive", he added that he was "very relaxed" about the process, which was "not taking up any time". Mr Walsh indicated that the talks might conclude in "the coming weeks", but he would also be happy if they continued for longer.

IAG is thought to be considering extending its guarantees about the use of Aer Lingus' Heathrow slots on routes to Ireland from five years to seven years, possibly in exchange for concessions over airport charges at Dublin.

Reading between the lines, it certainly appears that both sides are attempting to make the deal happen (it will also be subject to acceptance by 30% Aer Lingus shareholder Ryanair).

Aer Lingus rejects IAG's bid, but an old acquaintance should not be forgot. IAG will be back

IAG's outlook for 2015 is broadly unchanged.

Although it now expects a fuel bill of EUR6.0 billion, compared with EUR5.9 billion previously, it is still aiming for an operating profit of more than EUR2.2 billion, IAG's guidance for 2015. 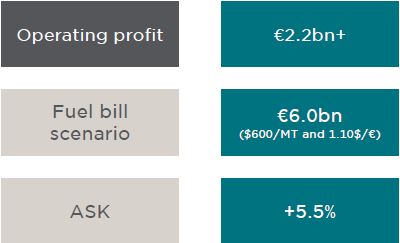 This target and its 2016 goal of returns in excess of the cost of capital continue to mark IAG out as the leading performer among Europe's Big Three legacy airline groups.