As is usually the case, Aer Lingus reported another first quarter loss in 1Q2015. The seasonally weakest quarter is never a good guide to the rest of the year, but the good news for Aer Lingus is that its margin of loss narrowed. This was driven by healthy growth in unit revenues, which outpaced the growth in unit costs.

Nevertheless, unit costs remain stubbornly on an upward path. To a large extent, this is because Aer Lingus has been adding costs associated with its long haul expansion ahead of the stronger summer season. The growth in its North Atlantic network has been well received in the market, with strong unit revenues in spite of double-digit capacity growth.

However, the company is focusing on initiatives to reduce the level of fixed cost in the winter and has indicated that it plans to extend its CORE restructuring programme. This is to be welcomed.

The improvement mainly reflects gains in revenue per seat across the network. Nevertheless, the loss margin remains high, underlining the seasonality in Aer Lingus' profitability. 1Q is typically the weakest quarter for Aer Lingus.

Aer Lingus' balance sheet remains in a robust state. Gross cash increased year on year by EUR17 million to EUR1,035 million (including restricted cash of EUR126 million) at the end of Mar-2015. This is equivalent to an impressive 239 days of revenue (210 days excluding restricted cash), providing a very strong cushion against unforeseen events. Net cash was EUR651 million, EUR97 million higher than a year ago. 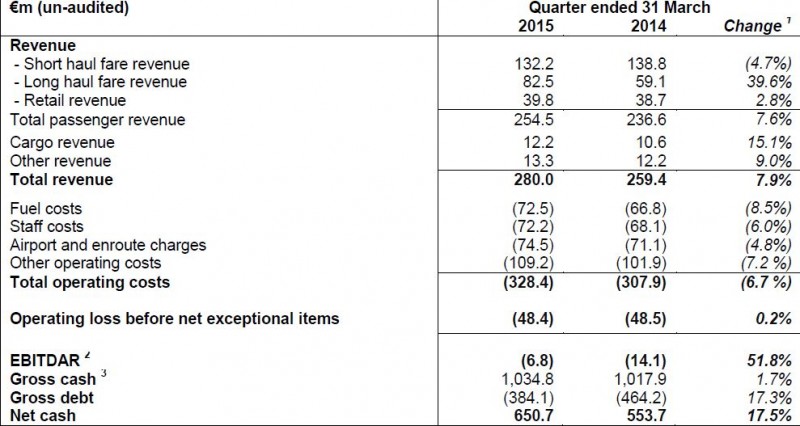 1 Sign convention: favourable / (adverse)
² Pre-exceptional Earnings before Interest, Tax, Depreciation, Amortisation and Aircraft operating lease rental
³ At 31 March 2015 gross cash includes restricted cash of €126.4 million, of which €105.3 million relates to the remaining funds relating to the €190.7 million once-off pension contribution placed in escrow as at 31 December 2014 and which will be released over time on the receipt of correctly executed waivers by current and former employees
Source: Aer Lingus

Aer Lingus carried 0.8% fewer passengers in 1Q2015 compared with the same period a year earlier, driven by a 3.4% fall in short haul passenger numbers, while long haul numbers jumped by 23.3%.

Total capacity, measured in available seat kilometres, was up 3.3% year on year, although there was a sharp contrast between short haul and long haul. 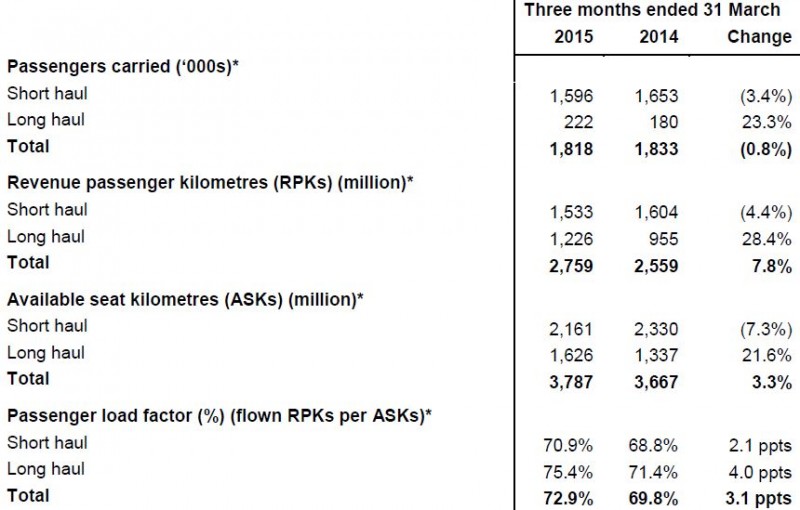 Short haul capacity was cut by 7.3% as Aer Lingus sought to increase load factor and to protect its route profitability in a market characterised by competitor capacity increases and what it described as "intense price competition on specific routes". These conditions also prompted a 7.0% reduction in passengers carried by Aer Lingus Regional, a franchise operated by Stobart Air on Aer Lingus' behalf.

Speaking on a conference call with analysts to discuss the 1Q2015 results, Chief Revenue Offer Mike Rutter said that the London-Dublin market had been affected by "unsustainable" capacity added from London City Airport, a reference to Flybe's entry on this route in late Oct-2014. However, Flybe is withdrawing from this route completely at the end of May-2015.

Mr Rutter added that Aer Lingus' short haul capacity cuts in winter 2014/2015 were "not a proxy for our strategy going forward". Although there would be a slight reduction in 2Q2015, short haul capacity would grow year on year in 3Q2015 and 4Q2015. According to Mr Rutter, short haul booking rates are ahead of where they were this time last year.

In addition to increased frequencies on New York, San Francisco and Orlando, Aer Lingus will start its Washington Dulles service on 1-May-2015. Mr Rutter told analysts that long haul bookings have "absorbed all new capacity".

So far, Aer Lingus has shown that its North Atlantic capacity additions have been well targeted. Its long haul network has been built on healthy point to point demand between Ireland and North America, which accounts for around 50% of its long haul traffic.

This is supplemented by connecting flows from Europe (30% of traffic, carried both by Aer Lingus' own aircraft and by Stobart Air under the Aer Lingus Regional franchise) and feeding passengers beyond its North American gateway cities (20% of traffic, building on commercial relationships with JetBlue, United and Air Canada).

Aer Lingus' long haul network focuses on North American cities with strong ethnic and cultural links to Ireland and offers the key attraction of very competitive pricing. Aer Lingus CEO Stephen Kavanagh said during the 1Q2015 results call that a good example of the success of his airline's long haul strategy can be found in Boston, where "Aer Lingus is fast becoming the home town airline for European travel".

Load factor up, but scope for further improvement

Total revenue was up by 7.9% year on year, more than the 3.3% increase in ASKs. Passenger revenue (91% of the total) increased by 7.6%, driven by long haul fare revenue growth of 39.6% and in spite of a 4.7% drop in short haul fare revenue. Cargo revenue grew by 15% on the back of Aer Lingus' long haul expansion.

Long haul revenue per seat leaped by 20.6%, a very strong outturn, particularly given the high level of capacity growth in this part of the network. This was boosted by the stronger USD and higher sales in North America. Aer Lingus expects yield increases to be "less pronounced" in subsequent quarters.

Costs up 6.7%, less than revenue growth

Operating costs grew by 6.7%, ahead of the growth in ASKs, but less than the growth in revenue. Aer Lingus attributed the cost increase to "increased fixed costs in off-peak season". In particular, growth in the more seasonal long haul market is adding costs in the winter, which are only fully offset in the peak season.

Speaking during the 1Q2015 conference call with analysts, Mr Kavanagh said that the airline was taking steps to reduce its winter cost base, including looking at more flexible labour resourcing and being "more creative" in its use of seasonal capacity.

Fuel costs were up by 8.5% and non-fuel costs grew at the slower rate of 6.1%. Aer Lingus did not feel much benefit from lower fuel prices due to its fuel hedging and the strength of USD versus EUR (which also had an adverse impact on other USD-denominated costs). Lower fuel prices should yield more benefit to the bottom line as the year progresses as a result of more recent hedges struck at lower prices.

Labour costs grew by 6.0%, mainly the result of long haul expansion, while airport and navigation charges were up 4.8% and other costs increased by 7.2%. Aer Lingus is continuing to seek and implement cost efficiency improvements through its CORE restructuring programme and also plans additional measures. CORE aims to achieve EUR40 million of annualised savings by the end of 2016.

There were no new announcements regarding IAG's offer to buy Aer Lingus, but the Irish airline took the opportunity afforded by its 1Q2015 results statement to reiterate its support for the deal. The statement said that the offer had a "compelling strategic rationale and significant benefits for Aer Lingus, its current and future employees, its customers and for Ireland".

The Irish government, owner of 25% of Aer Lingus, remains in talks with IAG over the assurances that IAG has offered concerning Aer Lingus' slots at London Heathrow. Recognising that it might not be able to rely on the deal going ahead, Aer Lingus also said: "However, notwithstanding the opportunities that this combination will bring, we are focused on building Aer Lingus and improving our return on invested capital performance".

2015 outlook should be positive

As Aer Lingus is in an offer period, stock exchange rules prevent it from giving 2015 profit guidance. Moreover, the seasonally weak 1Q result does not give much of an indication for the full year. However, there are some positive signs.

Aer Lingus managed to narrow its operating loss margin in 1Q2015, the result of growing its RASK (up 4.5%) faster than the increase in CASK (up 3.3%), continuing the favourable RASK versus CASK trend of 2014. Moreover, based on the strength of the point to point market between Ireland and cities with strong links to Ireland and supplemented by connecting traffic built on Dublin's advantages as a hub between Europe and North America, Aer Lingus' North Atlantic expansion continues to find a welcome response in the market. In addition, management has shown flexibility in adapting short haul capacity to market conditions.

On a more cautious note, although RASK is growing faster than CASK, it would be better for Aer Lingus if CASK were falling. The current trend of CASK growth owes much to the increased long haul costs being incurred before that network reaches revenue maturity.

Nevertheless, with lower fuel prices likely to benefit subsequent quarters and higher demand in the summer season likely to generate revenues that more than offset the costs of long haul expansion, Aer Lingus should be looking to achieve a significant increase in its FY2015 operating profit from last year's EUR72 million.

Beyond that, the IAG bid, if successful, should help Aer Lingus to make the next step up in profitability. Either way, further progress with its cost restructuring will be necessary if Aer Lingus is to generate sustainable returns in the long term.