At CAPA's Americas Aviation Summit held in Las Vegas 27/28 Apr-2015, a distinguished panel, moderated by Mr Kenneth P. Quinn, Senior Aviation partner of Pillsbury Law, discussed at great length the pressing issues around the "White Paper" submitted by three major US airlines to the US government.

The White Paper, promoted by Delta, American and United Airlines, alleges a wide range of subsidy payments have been made to the Gulf airlines by their respective governments, thus breaching the terms of the open skies bilateral agreements between the US and the UAE and Qatar.

This initial report contains a full repeat of the discussions. Those taking part were:

CAPA Americas summit debate on US and Gulf carriers: 28-Apr-2015

Following fast growth in recent years, the United States has become the second-largest long-haul market for Emirates, Etihad and Qatar. The three carriers in Apr-2015 have 170 weekly flights from the Gulf to the US (including one Emirates service via Milan), according to OAG data. 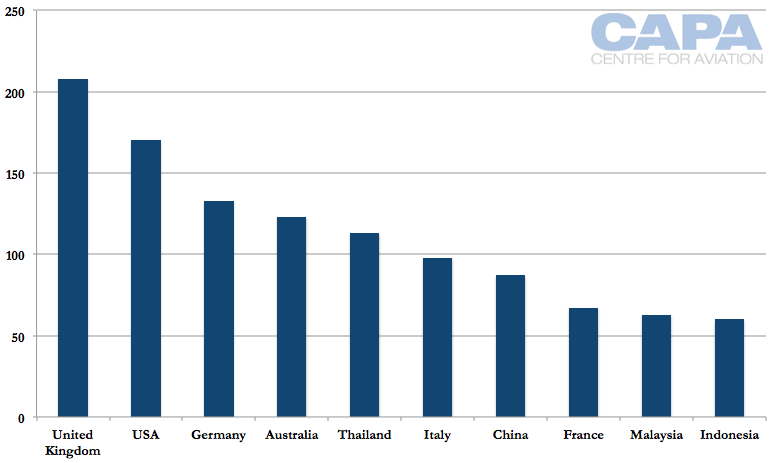 Additional new flights still to be announced could see the balance tip in 2015. And if not in 2015, then surely 2016 given the large untapped opportunities in the US compared to relative saturation in the UK. (Despite the wishes of an alliance of the big three US airlines and labour to cutback Gulf growth, these efforts will likely be fruitless.) This is based on both the number of flights and seat capacity; both the UK and US see an average of 390 seats per flight.

US airlines have ignored the regions Gulf carriers serve

International seat capacity from the US on American, Delta and United (blue) measured against Gulf carrier capacity to the US (red): 26-Apr-2015 to 02-May-2015 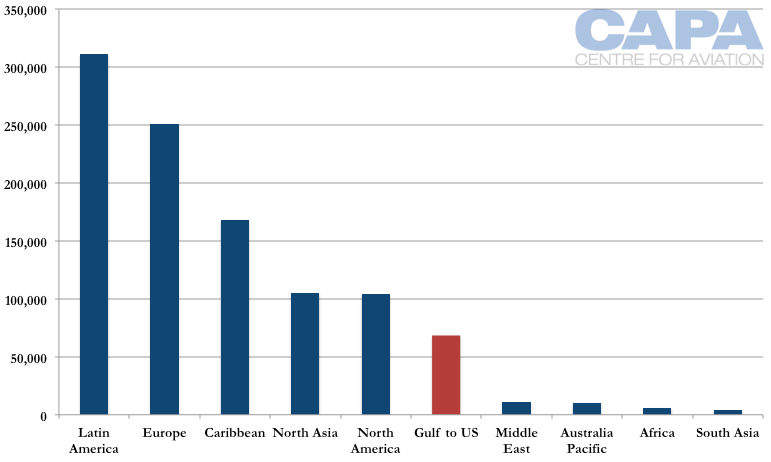 But the fact remains US carriers are not interested in the markets Gulf carriers primarily link the US with (this is different from European airlines, to which the US compare themselves). These regions are the Middle East and South Asia, and to a lesser extent Africa and Southeast Asia. These regions barely register for US international capacity. Although the US carriers might allege they could link Mumbai and Delhi with the US if Gulf carriers did not exist, this is a vastly over-simplified statement.

Looking past the argument, even if US carriers did serve Delhi and Mumbai, they would be unable to reach all of the other markets Gulf carriers serve, from Kathmandu to Karachi.

US airlines remain focused on the domestic market

There are other carriers with relatively small domestic exposure, but for many domestic seats account for over 70% of flying. It could be argued this figure is distorted as international seats often have a longer stage length and thus an ASK/ASM figure better represents use of resources. However, it is also true domestic flying typically comes at a higher yield and profit.

Domestic seat share of major carriers based in countries that see large long-haul Gulf capacity: 26-Apr-2015 to 02-May-2015 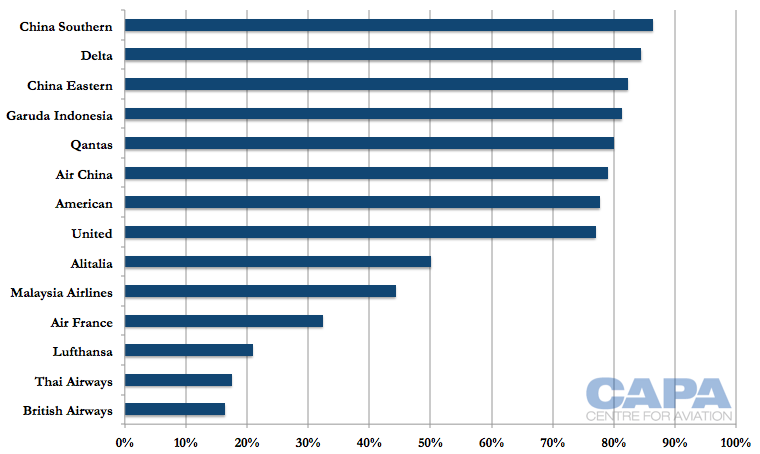 Delta’s domestic flying accounts for 85% of capacity, second only of major markets to China Southern’s 86% of capacity. American and United are lower at about 77%. This list of airlines includes many going through restructuring, but for various reasons, including problems of their own (legacy cost bases, not investing in product). The list also includes airlines that make handsome profits – starting with the US carriers, whose quarterly profits are now equivalent to what other major airlines aspire to make in a year. The big three airlines in the US could well generate profits of between USD20-30 billion in 2015, if current trends continue.

Australia's Qantas, with 80% of its capacity in the domestic market, is heading for a record profit despite Australia being the fourth largest market for Gulf carriers. Their 123 weekly flights to Australia (population 23m) is disproportionately larger than the 170 weekly Gulf flights to the US (population 300m). Qantas of course has a partnership with Emirates, suggesting for the US carriers that there is another way.

The US carriers and labour appear relentless in their campaign. The ferocity and intensity has perhaps taken the Gulf carriers by surprise. This is well evident in the panel discussion.

More quiet, lingering questions are what the eventual objective of the attack is - and which of the US carriers will be first to break rank and form a deep partnership with a Gulf carrier, carrying with it substantial upside for US carriers, and more flying for US pilots.