Garuda Indonesia will slow its international growth following a lacklustre performance on international routes in 1H2014, which drove a net loss of USD212 million. Garuda recorded an average international load factor of only 63% in 1H2014 as RPKs dropped by 3% despite a 15% surge in ASKs.

Competition in the Indonesian international and broader Southeast Asian market has intensified, making life extremely tough for Garuda just as the carrier attempts to make a bigger international push following its ascension into SkyTeam. The introduction of five 777-300ERs over the last year has contributed to overcapacity, just as its long-haul strategy has had to be revised.

Garuda has responded to the unfavourable market conditions by deferring plans to launch services to India and the Philippines. The carrier is also now planning to cut unprofitable routes and reduce capacity growth by deferring aircraft deliveries. 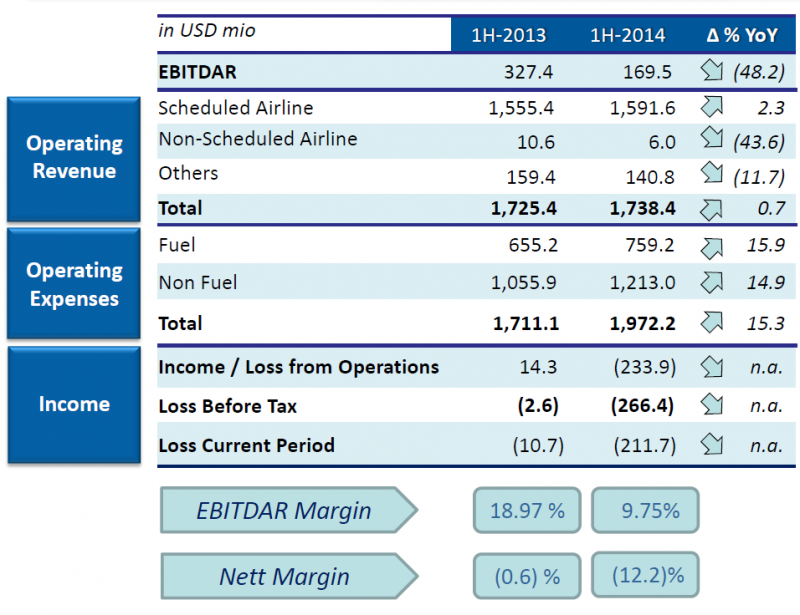 The net loss includes a loss of USD16 million at budget subsidiary Citilink on revenues of USD173 million compared to a loss of USD39 million on revenues of USD128 million in 1H2013. Citilink has been consistently unprofitable since it was transitioned from a unit to subsidiary in 2012, but its performance has been improving. Garuda’s full-service international business has clearly emerged as the biggest concern.

Garuda has been increasing its focus on the international market since taking its first of 10 777-300ERs, its new flagship and its only aircraft in three-class configuration, in mid-2013. After growing international ASKs by only 3% in 2012, international ASKs increased by 14% in 2013 driven by expansion in the second half as the first four 777-300ERs entered service. 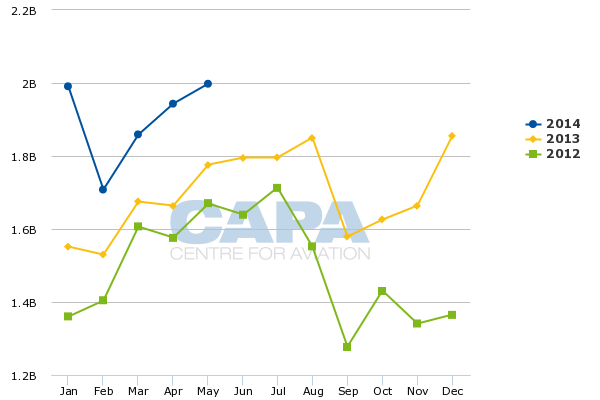 Garuda has struggled to fill the additional capacity from the start of its international push in mid-2013. Its international load factor has been down on a year-over-year basis for 12 consecutive months, dating back to Jul-2013. 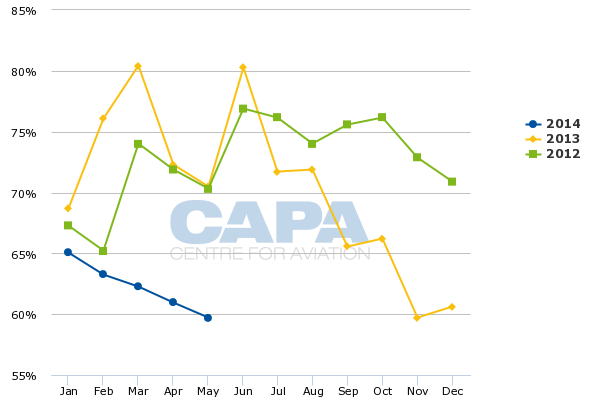 It is no coincidence the current trend started just as Garuda began 777-300ER operations. Garuda originally acquired 777-300ERs to pursue expansion in Europe and initially planned to use the type to operate multiple non-stop European routes.

But for the first 11 months Garuda used its new 777 fleet entirely on routes within Asia and to Saudi Arabia as services to London (initially planned from early Nov-2013) were repeatedly delayed. Garuda is now using 777s on just one European route, Jakarta-Amsterdam, which it began serving in early Jun-2014, replacing a one-stop A330 service to Amsterdam via Abu Dhabi.

Garuda in Apr-2014 again adjusted its plans for London and is now only planning to serve London Gatwick as a tag from Amsterdam starting Nov-2014. Garuda no longer intends to serve London non-stop and also has shelved any consideration for additional European destinations. Garuda previously was aiming to serve Paris, one destination in Germany (Berlin, Frankfurt or Munich were being evaluated) and one destination in Italy (Milan and Rome were being evaluated).

The adjustments to the long-haul operation are sensible given the intense competition in the Southeast Asia-Europe market. As CAPA previously suggested, Garuda is better off relying on partners and leveraging its new membership in SkyTeam to serve most of Europe.

Amsterdam, which has seen improvements since becoming a non-stop route, should be viable over the long-term given the connections Garuda is now offering throughout Europe (on KLM) and to the US (on Delta Air Lines). Other European services and the London tag are probably not necessary. London and the UK market overall can be more economically served one-stop via Amsterdam using KLM.

Garuda has few options for its 777 fleet

With only one flight to Europe, Garuda needs to find other routes for its 777s. The original plan was to use its 777-300ER fleet to serve Sydney as part of a same plane one-stop service to London. But without a one-stop product in the Australia-London market there is not sufficient demand to up-gauge from the A330 to 777 on Sydney-Jakarta.

As it is, Garuda has increased capacity to Australia by almost 20% over the last year to over 9,000 one-way weekly seats, driven primarily by new services from Jakarta to Perth and Bali to Brisbane. The Australia-Indonesia and broader Australia-Southeast Asia market have both seen large increases in capacity, putting pressure on yields and load factors for virtually all airlines. While Garuda does not break down its international load factor figures by region Australia is likely to have been one of the markets that has been struggling, prompting the carrier to avoid deploying the 777 on any of its Australian routes.

Garuda has increased capacity to Japan by about 50% over the past year to almost 11,000 one-way weekly seats, according to CAPA and OAG data. The growth has been driven by a combination of two new routes, Jakarta to Tokyo Haneda and Osaka, and up-gauging to 777-300ERs on two of the four existing routes, Jakarta and Bali to Tokyo Narita. While Indonesia-Japan is a growing market the increase has been overly ambitious.

The reality is Garuda does not need 777-300ERs at this stage – or certainly not all 10 aircraft. Its fleet of A330s are better suited for routes within Asia-Pacific. It currently has 11 A330-200s and seven A330-300s according to the CAPA Fleet Database.

Garuda also now uses the 777-300ER on some Saudi Arabia flights. Its niche fleet of two 747-400s is also used for religious pilgrimage flights to Saudi Arabia. The 747 is generally seen as a better tool to cater to the seasonally higher demand for Saudi Arabia services because the aircraft is bigger, has a smaller premium cabin and can be utilised infrequently. (Garuda at one point even considered acquiring new 747-8s to replace its 747-400s specifically for the higher density Indonesia-Saudi Arabia market.)

Garuda has another five 777-300ERs on order, two of which are slated to be delivered in 2H2014, followed by the final three in 2015. Given Garuda’s recent struggle in the international market the carrier does not need these aircraft. As the 777-300ER is generally a very popular type and is in demand Garuda should be able to defer some of its remaining 777 deliveries. A sale of 777s also cannot be ruled out.

In its 1H2014 results presentation on 22-Jul-2014 Garuda stated that one of its priorities is to defer some of the aircraft it has on order. Garuda is also looking at accelerating aircraft retirements. Both moves are aimed at reducing capacity (or slowing capacity growth) in response to challenging conditions in the international market. 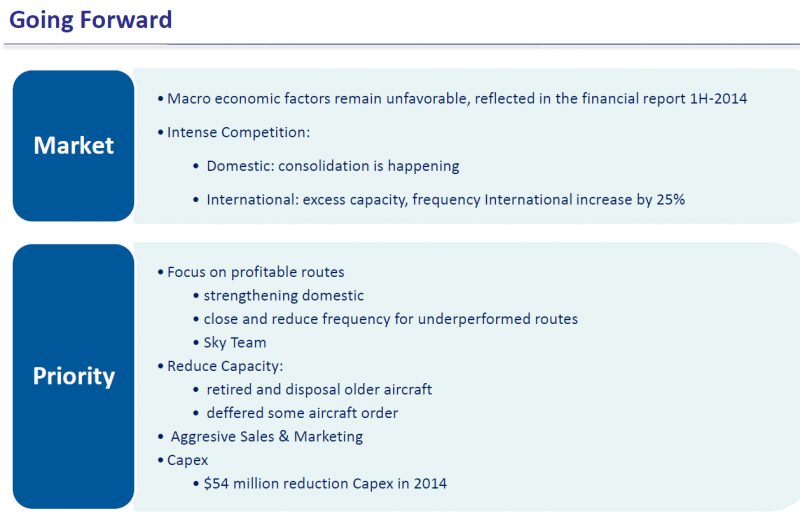 As Garuda’s international capacity plan is adjusted the carrier plans to withdraw from or reduce frequencies on some unprofitable routes. Garuda also confirmed in its 1H2014 results presentation that it has decided against proceeding with plans to launch services from Jakarta to Manila and Mumbai.

Both routes were in its 2014 network plan and were to be launched sometime in 2H2014 (an exact launch date was never set). Garuda says London will now be the only international destination added to its network this year – although with London there also has been a major adjustment as the original 2014 network plan had London Gatwick being launched in May as a non-stop flight from Jakarta.

Garuda did not mention aircraft types that it plans to defer but, as suggested above, deferring or selling the five remaining 777s it has on order would be logical. Garuda also has 17 additional A330-300s on order for delivery between 2H2014 and 2017, according to the CAPA Fleet Database. While Garuda could still use additional A330s for growth within Asia-Pacific, particularly if it is able to defer or sell its remaining 777s, deferring several A330s would also be sensible given current market conditions.

The group’s other orders consist of 80 narrowbodies and regional aircraft, including 50 A320/A320neos for Citilink. While some single-aisle aircraft deferrals are possible this is not as pressing as these aircraft are mainly used in the domestic market, where conditions are relatively more favourable with solid growth prospects for both the full-service and low-cost sectors.

Three Indonesian carriers have suspended operations so far this year – Merpati, Sky Aviation and Tigerair Mandala – resulting in a more rational level of capacity in the domestic market. Garuda now plans to focus on further strengthening its domestic operation while decreasing its focus on international expansion and rely more on SkyTeam (which it formally joined at the beginning of Mar-2014) to grow its global footprint. This is a sensible strategy given Garuda has a relatively weak position in the highly competitive international market but is the largest full-service carrier and only IATA member in the Indonesian domestic market.

As CAPA previously analysed, one of Garuda’s biggest strengths is its ability to offer SkyTeam partners and other international carriers domestic connections in one of the world’s largest and fastest growing markets. Garuda can also potentially carve out a niche providing some regional international connections but in the long-haul market the more viable approach is to rely primarily on partnerships.

Domestic full-service ASKs, which have been growing at high double digit clips the last several years, increased another 18% in 1H2014. But while Garuda has struggled to fill the additional seats in the international market, domestically it has continued to perform relatively well.

Garuda’s domestic yield dropped 10% but this was driven by the rapid depreciation of the Indonesian rupiah, which declined against the US dollar by 20% compared to 1H2013, impacting all domestic carriers. Garuda’s international yield was down 4%, which is a reflection of the highly competitive environment and to a lesser extent the weakening rupiah (as a large portion of international sales are in USD while domestic sales are in local currency).

The 4% drop in international yield is not alarming given most Southeast Asian carriers have seen yield declines over the past year due to the intense competition. But when combined with the large load factor drop, which other Asian airlines have generally not seen, the picture is not pretty.

As one of the smaller flag carriers in an increasingly competitive Southeast Asian market Garuda was always going to face some challenges as it implemented its international expansion plan. But the road has been even rougher than anticipated.

Dashing ambitions and deferring aircraft are painful pills to swallow but should improve Garuda’s long-term position and outlook.

The group stated in its 1H2014 results presentation that it has slightly adjusted its fleet plan for 2H2014 and now expects to add 17 aircraft for a year-end total of 166 aircraft. The previous version of Garuda’s fleet plan envisioned a net of 20 additional aircraft in 2H2014 for a total of 169. (Garuda did not specify if the reduction of three aircraft is a result of accelerated retirements, delivery delays or delivery deferrals.)