Fastjet secures Nairobi base, but expansion in East and South Africa may be on hold

Fastjet has secured its entry into the Kenyan market and its first expansion outside Tanzania and access to the key Nairobi hub by throwing a lifeline to collapsed local carrier Jetlink Express.

The two carriers signed a memorandum of understanding (MOU) on 28-Jan-2013 to create a joint venture allowing fastjet to launch its brand in Kenya in the next few months.

Fastjet launched two domestic routes from Dar es Salaam in Tanzania in Nov-2012 with A319 aircraft, rebranding and refleeting its newly acquired Fly540 operation in the country. The carrier also owns the Fly540 regional operations in Angola and Ghana.

The bigger Kenyan market will provide a strong launch pad for further Eastern African expansion, including the development of links with international carriers which are already being explored.

The Jetlink joint venture also suggests that fastjet will compete against Fly540 Kenya, whose ownership is part of an increasingly bitter dispute with Five Forty Aviation.

Jetlink was launched in 2004 and has traffic rights to all domestic destinations in Kenya, as well as a number of regional routes.

But the carrier suspended operations in Nov-2012 after cash flow issues resulting from being unable to access about USD2 million funds held in a bank in South Sudan.

Before its grounding, Jetlink operated services from its Nairobi hub to Kisumu, Mombasa and Eldoret, as well as regional services to Juba and Mwanza using fleet of seven 50-seat CRJ jets and a 79-seat Fokker-28. It had ambitious expansion plans to cover much of East Africa. 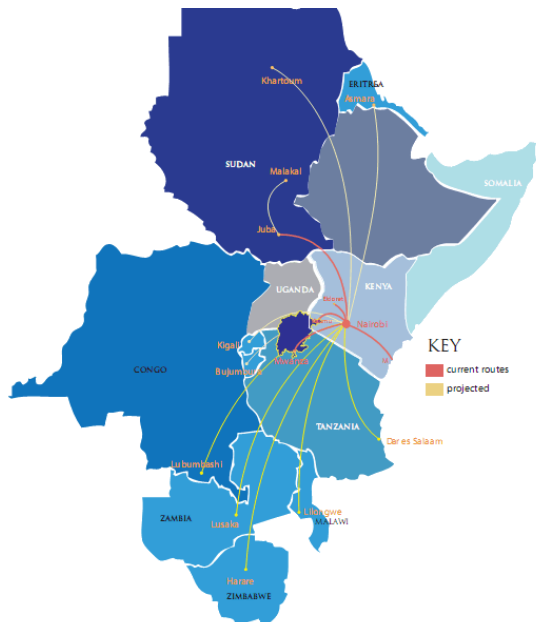 The new venture with fastjet will reportedly be separate from the troubled airline. Jetlink is also in discussions with potential investors to resume operations in its own name in addition to the fastjet JV.

The carrier says it plans to launch its first international routes soon and is “exploring opportunities with various global carriers”. It has already confirmed preliminary talks with Emirates over the possibility of providing feeder traffic on each others' networks. Emirates operates to 24 African destinations from Dubai. 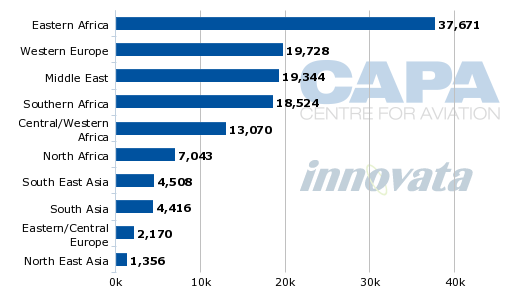 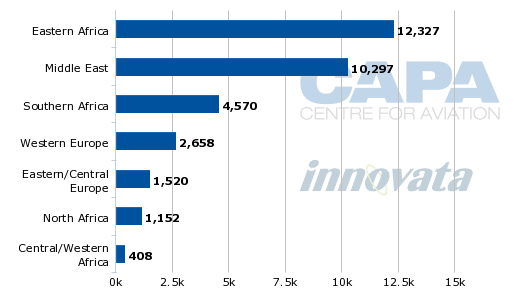 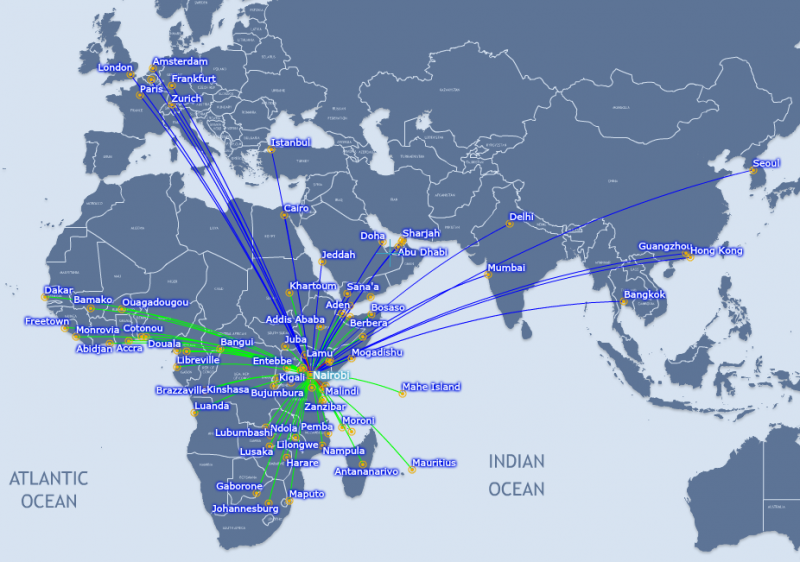 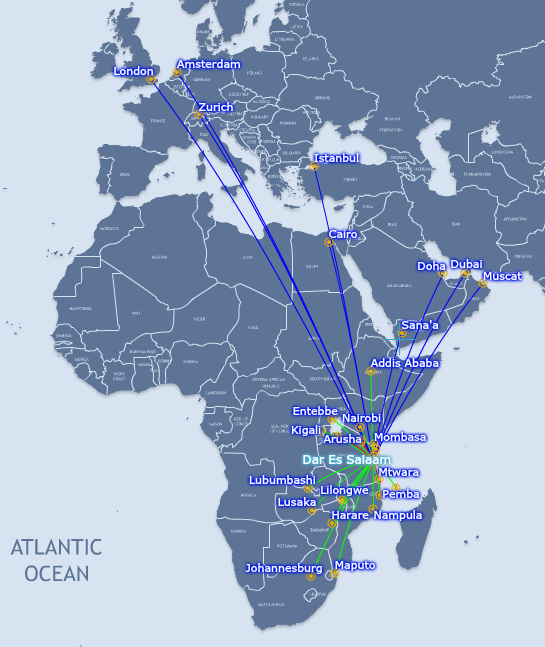 But expansion plans are dependent on the arrival of additional A319s over the course of 2013. Fastjet expects to deploy at least five A319s by Jun-2013, building to a fleet of up to 15 of the type by the end of 2013. It currently has just three A319 operating on three destinations in Tanzania, the only country where it has been able to get approval to operate under the fastjet brand.

The carrier has set itself a target of carrying 12 million passengers a year, by promising to bring affordable air travel to “people who used to spend 12-hours on a bus to visit their relatives”. To achieve the number would require upwards of 30 to 40 aircraft.

Expansion plans in South Africa and Ghana are on hold

Fastjet's attempts to enter the South African market through the acquisition of defunct low-cost carrier 1time have hit a snag. The carrier has offered to buy the assets of 1time for ZAR1 (USD0.12) to secure 1time’s domestic and international traffic rights, providing a launch pad for expansion into southern Africa.

Fastjet had hoped to relaunch 1time under the fastjet brand in early 2013 with initial services to South African cities of Johannesburg, Cape Town, Durban, Port Elizabeth and East London. 1time had about 15% of the South African market before it was placed in provisional liquidation.

But state-owned South African Airlines, its LCC subsidiary Mango and independently owned Comair have lodged objections to the takeover with the Air Services Licensing Council on the basis that airlines operating domestic services within South Africa must be 75% owned by South African residents.

Fastjet has applied to the South African Minister of Transport for an exemption to the rule. The Air Licensing Council will hear arguments for and against allowing an exemption in Feb-2013. The hearing must be held before 27-Feb-2013 when 1time will go into final liquidation.

Mango reportedly claimed there was a high probability that one of South Africa’s existing carriers would fail if another airline was allowed to enter the market. The demise of 1time, and Velvet Sky earlier in the year, has provided some short term domestic relief, especially to financially embattled South African Airways.

Promised West African expansion from Ghana has not yet eventuated

Fastjet’s plans to expand its Ghana Fly540 operations throughout Eastern Africa also appear to have stalled.

Fly540 Ghana currently operates on just one route, Accra-Kumasi, using ATR 72 aircraft. But on its website the carrier claims it has already launched, or would do so in Dec-2012, services to Abidjan, Ivory Coast, Lagos, Nigeria, Takoradi, Tamale, Freetown, Ouagadougou, Lome and Monrovia. In reality none of these have commenced.

Fastjet plans to commence six times weekly services from Dar es Salaam to Zanzibar in the near future although a launch date has not yet been set. It also plans to launch international services with a daily flight to Entebbe in Uganda, two daily flights to Mombasa in Kenya and up to four daily flights to Nairobi in Kenya.

The Jetlink deal comes at a time that fastjet’s relationship with Five Forty Aviation hits a new low after Five Forty moved to cancel the Fly540 brand licence from Fastjet’s operations in Tanzania, Angola and Ghana.

Relations between the two carriers have deteriorated since fastjet bought Lonrho Aviation and its regional airlines in Tanzania, Angola and Ghana which all operated under the Fly540 brand licence from Five Forty.

Five Forty alleges it is owed USD7.7 million in unpaid licence fees. It also claims fastjet failed to disclose financial information for Dec-2012 or information confirming compliance with safety and quality systems for the past three months.

The company has also demanded that Fly540 Ghana and Fly540 Angola repaint their aircraft in neutral colours and remove the Fly540 branding from sales offices, as well as return all material containing the brand’s logo and rename the companies other than Fly540. Fly540 Tanzania was replaced by Fastjet operations in Nov-2012.

Fastjet, however, says it is the sole owner of the Fly540 brand, which it acquired through its acquisition of Lonrho Aviation in Jul-2012 and Five Forty is powerless to terminate the licences.

Fastjet is also dealing with series of 'legacy' issues, which it says were not disclosed before the takeover, including unpaid bills by Fly540 ranging from outstanding tax to arrears on aircraft leases and maintenance.

Fastjet denies it has any further liability or debt due to Mr Smith or any entity controlled by him, saying “the purchase of Five Forty Aviation has been fully consummated”.

Network expansion by fastjet and its Fly540 will be slow due to the protectionist stance of African governments. Absent the liberalisation of the continent’s skies through the broad implementation of the Yamoussoukro Declaration, nations remain protective of air rights and their perceived need to support a national carrier, even if they are loss-making.

Fastjet views African aviation as being under-served and is encouraged by projections that seven of the world's 10 fastest economies will be in Africa and sub-Saharan Africa in particular: Ethiopia, Mozambique, Tanzania, Congo, Ghana, Zambia and Nigeria.

This economic growth and an expanding middle class underline the enormous potential for African aviation. Airlines enjoy a natural advantage as a means of connecting cities, where most of Africa suffers from poor or non-existent ground transport infrastructure.

But the pan-Africa LCC model is untested outside South Africa, Africa’s biggest economy, where SAA’s Mango and Comair’s LCC subsidiary Kulula Air have been successful. Africa also does not lend itself to the same low-cost models operated by LCCs in Europe and the United States.

Airport charges and fuel costs are among the highest in the world and there is a lack of competitive choice for ground handling services. Most cities offering sufficient traffic are served by a single airport, giving them little incentive to negotiate cheaper aeronautical fees. As a result, fastjet’s growth, well-funded and well managed as it is, will take time.

Fastjet was formed by African-focused conglomerate Lonrho which reversed its ownership of Fly540 into Rubicon, which in turn changed its name to fastjet. Lonrho remains Fastjet’s majority shareholder with 61.4% of the shares.

The carrier has the backing of easyJet’s Sir Stelios Haji-Ioannou’s easyGroup, along with a very strong board, and launched its first rebranded Fly540 service on 29-Nov-2012 with two domestic routes in Tanzania, Dar es Salaam to Kilimanjaro and Mwanza, and will progressively rebrand and refleet Fly540’s operations in Angola, Ghana, Kenya and Tanzania with A319s, implementing a hybrid LCC model.

Sir Stelios owns the fastjet brand which he has licensed to fastjet for 10 years and in return will receive 0.5% of revenue with a minimum guarantee of USD500,000 per annum. He has also taken a small 5% stake in the airline.

Fastjet announced on 13-Nov-2012 that it had raised another USD2.4 million to help fund the conversion of Fly540 hubs in west and southwest of Africa.