IATA has raised its projections for profitability in North America and Latin America while reducing the profits projected for airlines from Europe, Asia and the Middle East. The latest revision in IATA’s financial forecast, released earlier this week as part of the association’s annual general meeting in Beijing, reflects the growing concerns over a slowdown in Europe. The debt crisis in Europe is expected to weaken economic growth in the region, impacting predominately European carriers and, to a lesser extent, Middle Eastern and Asian carriers. While many carriers from the Americas also operate to Europe, this exposure is offset by the relative strength in market conditions back home.

North American carriers are now projected to post net profits of USD1.4 billion in 2012 and account for nearly half of the USD3 billion in global industry profits IATA expects for the year. In 2011, North American carriers only accounted for only 16% of the industry’s global profits, or USD1.3 billion of the USD7.9 billion total. These figures exclude the bankruptcy reorganisation costs at American Airlines.

In the last financial forecast, which IATA published in Mar-2012, the association projected profits of only USD900 million for North American carriers. The upward revision of USD500 million is driven by the recent improvement in yields at US carriers, which has been achieved as a result of capacity discipline. IATA is expecting demand growth (RTK) of only 0.5% in North America for 2012 but projects capacity (ATKs) will drop 0.1%, leading to an improvement in load factor.

In briefing the media on the new 2012 financial forecast, IATA chief economist Brian Pearce pointed out how load factors in the US domestic market are now the highest in the world. He says tight management of capacity is helping improve the profitability of US carriers and US carriers are also benefitting from the relative strength of the US economy compared to Europe.

Latin America’s economy is also holding up relatively well, boosting the prospects of carriers from both Central and South America. Latin American carriers are now projected to collectively post net profits of USD400 million in 2012, up USD300 million from IATA’s prior USD100 million projection. Mr Pearce says this revision is driven by an anticipated turnaround in the Brazilian market, which has been unprofitable the last several quarters but is now starting to show signs of improvement including higher yields following the recent capacity cuts by market leaders Gol and TAM.

“The situation in Brazil will improve,” Mr Pearce predicts. He says airlines from other parts of Latin America also continue to perform well and the “relative robustness of economies in the region” bodes well for Latin carriers.

Latin America and North America are now expected to be the only two regions which will see an improvement in profitability for 2012. European carriers are now expected to post a loss of USD1.1 billion in 2012, which represents a downgrade of USD500 million compared to the forecast in Mar-2012, which projected a loss of USD600 million. The revision comes as some major European economies have fallen into recession and IATA anticipates weak economic conditions will spread to more European countries in 2H2012.

“We think the second half of this year in Europe will be worse than what we have seen so far,” Mr Pearce says. He warns that the crisis in the euro zone presents “serious downside risk” to the overall outlook for 2012 and that revenues and profits for European carriers could end up being worse than anticipated.

Cargo and Europe exposure drags down profits in Asia

The Asia Pacific region is still expected to be more profitable than any other region, accounting for an estimated USD2 billion in net profits for 2012. But this would represent the worst performance for Asia Pacific carriers in several years and a 59% drop compared to the USD4.9 billion profit posted for the region in 2011. It also represents a USD300 million downgrade from the prior forecast of USD2.3 billion following weaker than expected results for Asian carriers in 1Q2012.

Mr Pearce says the weak global air freight market, which Asian carriers are generally more exposed to than carriers from other regions, is having an impact on profitability in the region. The cargo market has shown signs of bottoming out from a traffic perspective but yields remain depressed. “The weakness in air freight has hit this part of the world more substantially than others,” Mr Pearce explains.

Mr Pearce also says there has been some slowdown in domestic growth in the key Chinese and Indian markets. Otherwise, intra-Asia traffic remains relatively strong, driven by continued economic growth in Asia. The long-haul market in Asia is much weaker, dragging down overall profitability, as so far Asian carriers have been more impacted by the crisis in Europe than US carriers. Cathay Pacific and Singapore Airlines intend to concentrate growth on intra-Asia flights and Cathay will cut back in Europe.

IATA is forecasting a 3.9% increase in demand for Asia in 2012, outstripping an expected 3.3% increase in capacity.

Middle East carriers, meanwhile, are expected to record net profits of only USD400 million in 2012, down 60% from the USD1 billion profit that the region was able to record in 2011 despite the impact of the Arab Spring. The previous IATA forecast projected profits of USD500 million for Middle Eastern carriers.

Finally African carriers are expected to roughly break even for the fourth consecutive year. IATA is now projecting African carriers to post a net loss of only USD100 million in 2011, matching the earlier projection from March. African carriers are expected to be impacted by the economic problems in Europe as Europe is by far their largest international market. But strong growth in other markets, including intra-Africa and Asia, will drive an expected increase in demand of 4.2%. Capacity is expected to increase 5.2%, resulting in a drop in load factors driven by weakening loads on flights in the Europe-Africa market. South African Airways will end its Cape Town-London Heathrow route and will re-deploy capacity on intra-Africa routes as well as profitable routes to India and Australia. Carriers that have traditionally relied on the European market – typically in the Indian Ocean, including Air Austral and Air Mauritius – have been hurting from the European downturn.

Overall IATA is expecting airline industry net profits of USD3 billion, which matches the forecast from March with the gains in the Americas offsetting the downward revisions for Europe, Asia and the Middle East. A USD3 billion profit for the global industry would mean a net margin of only 0.5% as revenues are projected to come in this year at USD631 billion (representing an increase of nearly 6% over 2011). This compares to a 1.3% net margin achieved in 2011 and a 2.9% net margin recorded in 2010, which came after the industry incurred losses at the global level during the global financial crisis in 2008 and 2009.

“The USD3.0 billion industry profit forecast has not changed. But almost everything in the equation has,” stated IATA director general Tony Tyler. “Demand has been better than expected, so far this year. And fuel prices are now lower than previously anticipated, but that’s on the expectation of economic weakness ahead. The Eurozone crisis is standing in the way of improved profitability and we continue to face the prospect of a net profit margin of just 0.5%.”

Downgrade of financial forecast much more likely than upgrade

IATA is warning that it could be forced to downgrade its global forecast should the situation in Europe worsen. For now IATA is assuming that “the worsening of the Eurozone situation is limited and does not deteriorate into a widespread banking crisis”. IATA, with its expectations for profits for North America and Asia Pacific, also assumes that the US economy will continue to recover albeit at a very slow pace and that while economic growth in China will slow there will be “no hard landing”.

The biggest downside risk is the euro zone crisis, with IATA estimating there is a 35% chance that a deeper crisis in Europe will weaken results for European carriers and drag down the profit figures for the global industry. IATA also estimates there is a 10% chance of a spike in oil prices leading to lower than anticipated profits. 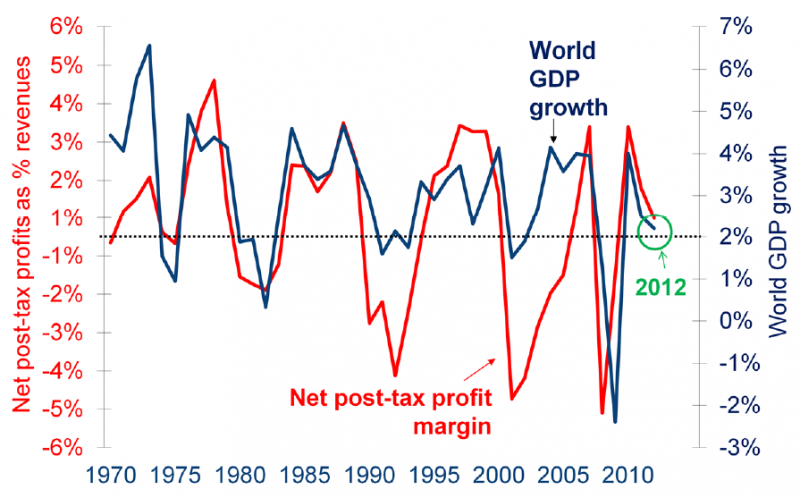 Mr Pearce warns that the outlook for the rest of this year is “uncertain” and difficult to predict. While traffic has been up more than expected so far in 2012, yields are down except in the US and Mr Pearce remains “pessimistic” about yields for the remainder of the year. As a result, IATA decided against raising its overall forecast for global profits despite the recent drop in fuel prices.

IATA is now expecting oil prices for the entire year to average USD110 per barrel, down from the USD115 per barrel figure used in the last forecast from March. While fuel prices have dropped below USD100 per barrel recently, IATA points out that fuel is still expected to account for one-third of airline operating costs this year.

Even with the recent fall, oil prices are still higher than early 2011. Over the last 15 months, the average price of oil has been USD120 per barrel. 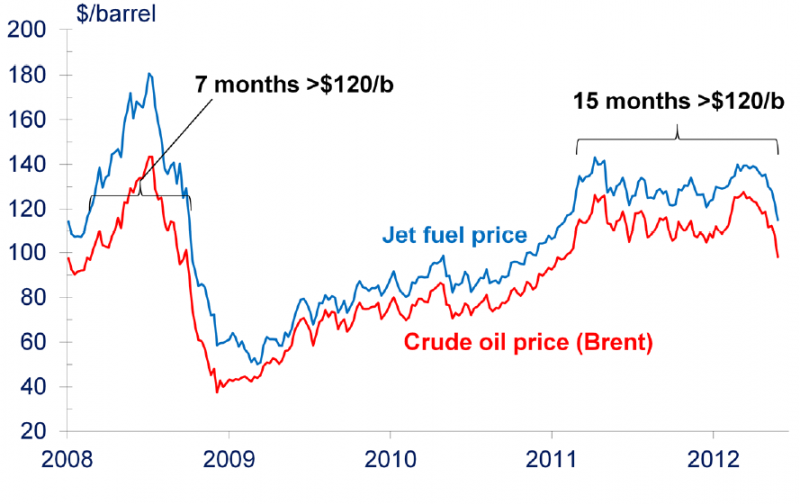 IATA warns the recent softening in oil prices could reverse if the ongoing dispute with Iran deteriorates. But the biggest concern is with the global economy. “There has been no let-up in the volatility of the economic environment. A few months ago, an oil price crisis was the biggest risk,” Mr Tyler says. “Now all eyes are back on Europe. Markets are expecting the Eurozone sovereign debt crisis to intensify and economic damage to follow. But with little clarity on how European governments will manage the situation beyond providing further liquidity, the risk of a major downward shift in economic prospects is very real. The next months are critical and the implications are big.”

Mr Pearce says IATA has looked at the possibility of a break-up of the euro zone but for now assumes it will be held together. Clearly Europe remains a huge downside risk for the industry, with losses for European carriers potentially being far worse than the USD1.1 billion currently projected. There could easily be a greater than anticipated knock-on effect for carriers from the Middle East, Asia and North America, which rely heavily on European traffic. Overall the airline industry remains in a fragile state and, as Mr Tyler pointed out in his state of the industry address this week, 2012 will be yet another challenging year. 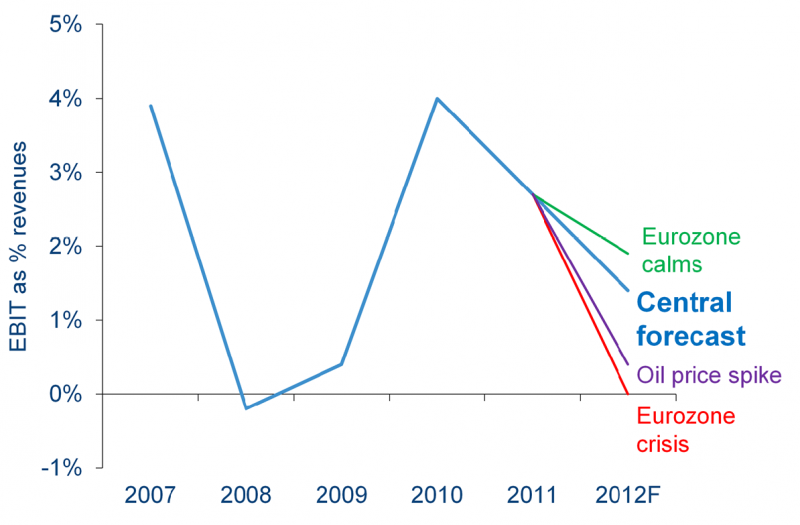 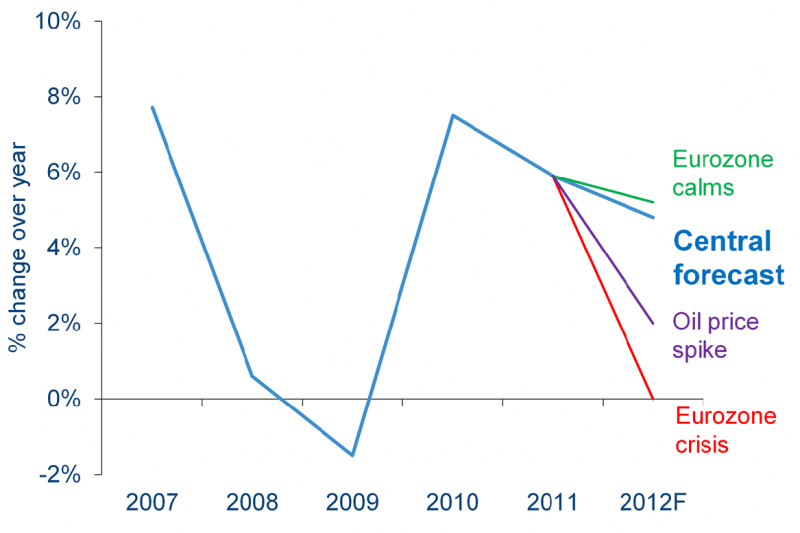 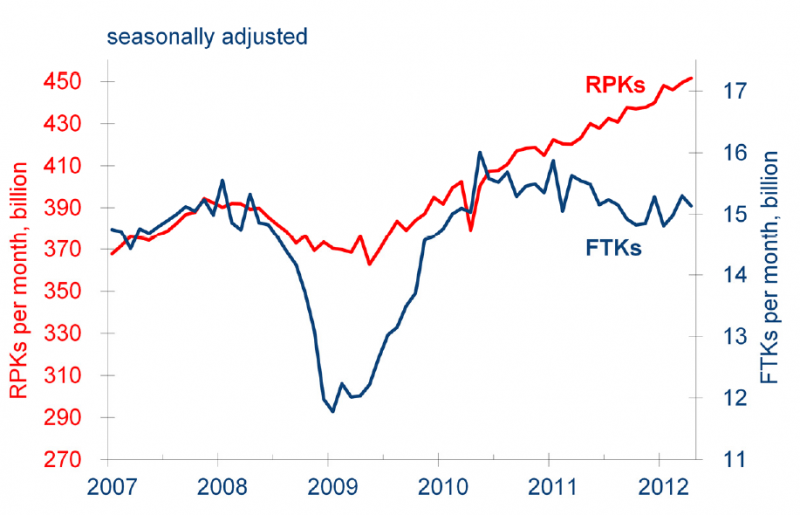 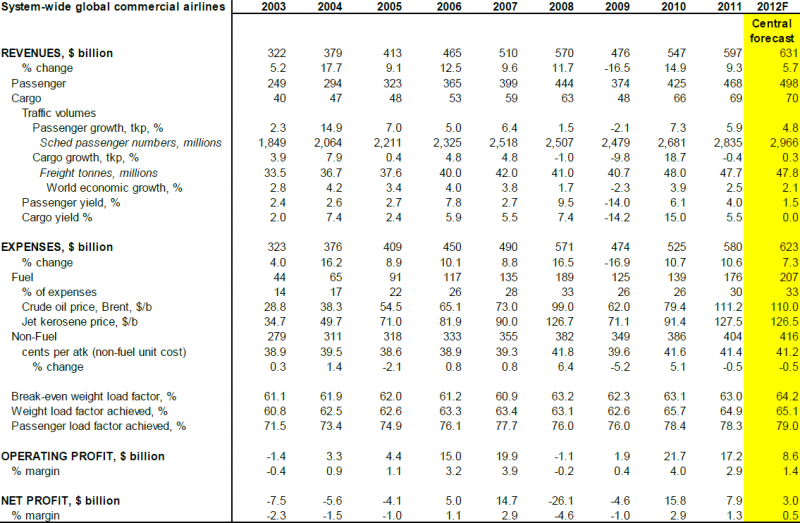