Increasing economic uncertainty in Europe has resulted in US carriers pulling back capacity to the continent later this year to proactively contain losses and a drop-off in traffic that could result from the increasing likelihood of Greece’s exit from the euro zone and the Euro falling to a two-year low against the US dollar. Delta has already stated its goal to reduce capacity 5% across the Atlantic during the fourth quarter, while United has already instituted schedule changes that show a pull-down in secondary European markets. US Airways, which during the last year has enjoyed marked success in its trans-Atlantic business segment, has not declared any plans regarding its capacity to Europe later in the year. But the carrier is launching several seasonal services on the back of its strong performance in the European market.

Trade group Airlines for America (A4A) estimates that during the fourth quarter of this year US carriers will reduce their capacity to Europe by 7.8% as they attempt to better manage seasonality and stave off effects of a recession on the continent. This change is significant as Western Europe is still the largest international market from the US.

Projected change in US carrier international capacity: 4Q2012 vs 4Q2011 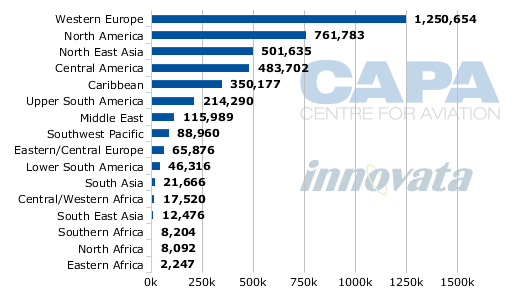 It is not surprising Delta has already publicly declared its intent to pull down its trans-Atlantic capacity after the US Labor Day holiday. During the last year, the carrier has made a concerted effort to improve its capacity management from season-to-season in an effort to avoid collapsing the profits it makes during the strong peak summer travel season between the US and Europe with the weaker winter months. 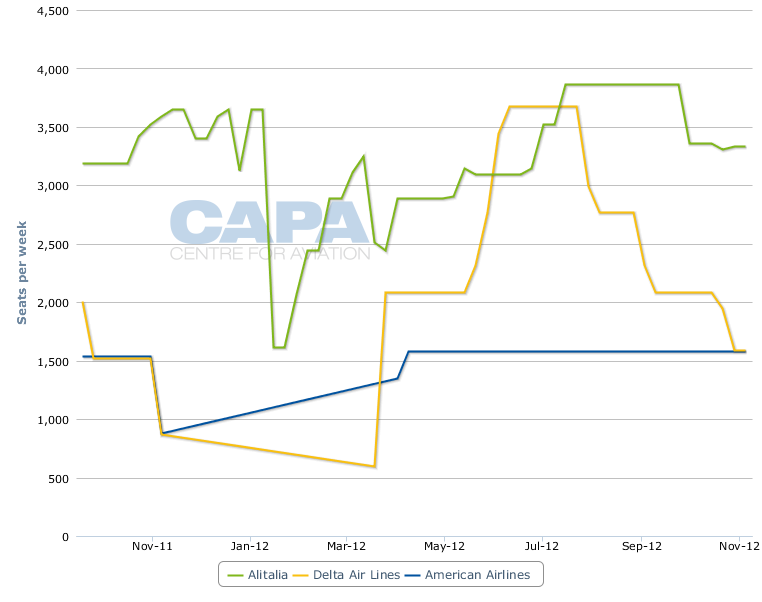 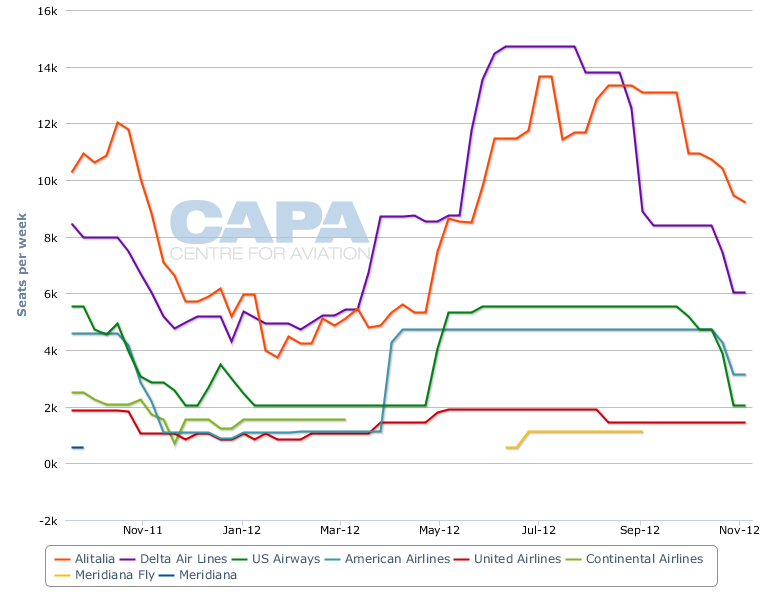 Flights from Atlanta to Milan are scheduled to end in Oct-2012. While it is not certain if the suspension is seasonal or permanent, once the pairing ends the only North American gateways remaining to Milan will be New York and Miami. A decade ago in addition to the major northeastern gateways direct flights to Milan were available from Toronto, Washington Dulles, Chicago, San Francisco, Boston, Detroit, Philadelphia and Los Angeles.

Other service cuts Delta is initiating in 4Q2012 include ending flights from JFK to Athens, which will result in no direct winter flights from the New York to the Greek capital for the first time in recent memory. US Airways will serve Athens from its Philadelphia hub five times per week.

United is delivering its capacity cuts by eliminating some redundant flights from its two primary US east coast hubs of Newark and Washington Dulles. As flights from Newark to Rome are eliminated, United’s flights from Dulles to the Italian capital are remaining intact. Other seasonal flights United plans to suspend in Sep-2012 include Newark-Copenhagen and Washington-Moscow.

Both United and Delta appear to be working in closer cooperation with their respective Star and SkyTeam alliance partners in managing their trans-Atlantic capacity, ensuring ample coverage remains while various service reductions are being instituted. United still has feed into Scandinavia through flights operated by SAS from Newark to Copenhagen, while Delta and joint venture partner Air France-KLM have worked to ensure no service disruptions ensue from capacity cuts being introduced by the SkyTeam business partners. Changes within the joint venture structure include Delta assuming operation of Air France’s Seattle-Paris flights, and transitioning its own Detroit-Paris flights from seasonal to year-round service.

Delta’s 5% cut in trans-Atlantic capacity is a tactic to manage slower demand in Europe from a seasonal perspective and the weaker point of sale in Europe as the Euro continues to weaken. Delta recorded a stellar performance in its trans-Atlantic markets during 1Q2012. Delta grew unit revenues by 22% on a 9% reduction in capacity. Carrier management has stated that although point of sale performance in European origin markets remains tenuous, there is some corporate opportunity for US companies in Europe, which has sustained strong US sales. But the duration of that demand could be short-lived as Europe’s economy continues to weaken.

US Airways has not offered any guidance on its plans to trim European capacity during 4Q2012, but the carrier has released a robust schedule for the peak summer period that includes service to 18 European cities, seven of which are seasonal. Additionally, the carrier is adding seasonal daily frequencies to year-round flights to Frankfurt from both its Philadelphia and Charlotte hubs.

The airline has made a long-haul push from Charlotte during the last few years, focussing most of its international expansion from the city. Charlotte is US Airways’ largest hub in terms of departures and offers flights to 26 global international destinations compared with 28 at its Philadelphia gateway. During the last few years US Airways has introduced flights to Paris, Dublin, Rome, Madrid and Rio de Janeiro from its Charlotte hub, and offers year-round flights to Frankfurt, London Gatwick and Rio. Frankfurt, Munich (served by Star partner Lufthansa), Rome and London are now among the top 10 destinations from the airport by number of seats. 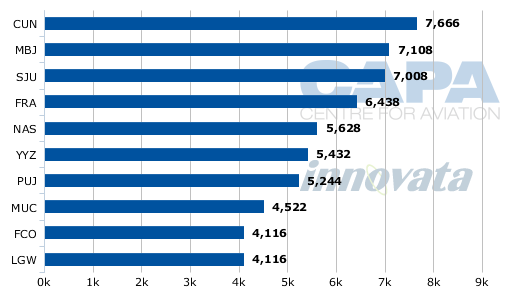 Despite accounting for only 5% of the capacity between North America and Europe, US Airways during the seasonally weak 4Q2011 grew its trans-Atlantic unit revenues by 12%, which outpaced the performance of the carrier’s domestic entity. The airline attributed its strong revenue growth in European markets to an aggressive push by its own sales team to shore-up corporate accounts on the continent, and product improvements including the lie-flat business seats on the carrier’s A330 widebodies.

US Airways was not invited to join the trans-Atlantic joint venture formed by its fellow Star partners Air Canada, United and Lufthansa launched in 2010. Part of that arrangement is coordinating joint sales, so it is very likely that US Airways is competing against its Star partners in European corporate sales. US Airways management is asked repeatedly when or if the carrier will join the Star joint business agreement. But recently executives declared joining the arrangement is not a high priority as it sets its sights on lobbying for a merger with oneworld anchor carrier American Airlines.

As Delta and United shutter their flights from New York to Rome, US Airways could see some traction on its year-round flights from Philadelphia (149km from New York) to Rome operated with larger-gauge A330s featuring the lie-flat business class seats. US Airways is offering seasonal flights from Philadelphia to Barcelona, Venice, Lisbon, Athens and Glasgow through October, joining year-round service to Frankfurt, Amsterdam, Brussels, Dublin, Rome, London Heathrow, Paris, Madrid, Manchester, Munich, Tel Aviv and Zurich. From Charlotte, US Airways’ seasonal flights are returning to Paris, Dublin, Rome and Madrid.

Although US Airways late in 2011 recorded strong growth in its European corporate accounts, 2012 could prove challenging for its trans-Atlantic performance. In the past US Airways has touted its smaller European footprint as an advantage during challenging economic cycles, but its smaller scale overall makes it tough for the carrier to pull large widebody A330s from markets and easily find places to redeploy the capacity. US Airways does not have an extensive footprint in Latin America, where it only currently offers service to Rio, and has no Asian connections. Due to its geographic limitations, US Airways is not afforded the flexibility to move its widebody aircraft around an extensive network.

But US Airways and other carriers could be bolstered by US passengers eager to take advantage of the Euro’s decline against the dollar for travel bargains to Europe. But much of that demand will be tied to how the European crisis affects the overall global economy. The US stock market has been pressured by the crisis in Europe, and the country could be headed for its own recession in 2013 if federal spending cuts and expiring tax cuts occur as currently planned. Consumers might strike a cautious tone and delay long-haul travel until the US economy shows stronger signs of recovery.

As Europe’s dark cloud creates global economic uncertainty, the summer US travel period for the moment is showing signs of stability as overall forecast traffic volumes are expected to remain flat year-over-year at 206 million passengers, and the number of international travellers is expected to grow from 26.3 million to 26.8 million. US Airways feels so confident about the current demand environment that it has declared it would have the highest lower-priced fares in many markets to avoid selling tickets too cheaply for the summer. It appears to be a gamble the carrier is willing to take as it makes its seasonal push into the beleaguered European market.