Japan Airlines' 17% margin may be envy of the industry, but JAL's outlook is less upbeat

Japan Airlines, with its recently achieved 17% operating margin, may be the antipode to Warren Buffet’s advice about investing in airlines, but JAL is not in an entirely enviable position. The forthcoming entry of low-cost carriers, if initially small in number, will soon have a seismic affect.

While JAL is so far more assiduously managing this new prospect than is competitor All Nippon Airways, it is showing signs of buckling.

Despite FY2012 offering growth and recovery from the tsunami and earthquake-affected FY2011, JAL projects profit to decrease. Recent months show JAL is growing capacity ahead of demand, which when combined with LCC proliferation will suppress profits in a doubtful market. JAL’s euphoria of a stellar year after its remarkable emergence from bankruptcy may be shortlived, for reasons beyond its control.

JAL is rightly looking past a uniquely difficult FY2011 that was savagely affected by the country's earthquake and tsunami and subsequent Fukushima nuclear disaster. While FY2012, which commenced 01-Apr-2012, has been known to promise its own challenges resulting from the entry of three low-cost carriers and the structural shift they will force, the tail end of FY2011 has recently shown itself to add further complications for FY2012.

As JAL's domestic network, an important strength for the carrier, recovered over FY2011 from last year's disasters, which saw demand drop 50% initially, demand grew ahead of capacity. But starting in Nov-2011 as JAL's domestic capacity neared or exceeded pre-tsunami levels, demand began to lag, indicating that a complete recovery – let alone growth – may not be as guaranteed as the carrier hopes. While JAL recorded significant outpacing of demand over capacity in Mar-2012, this figure is heavily skewed. JAL had a short lead time reducing capacity in the days after the Mar-2011 earthquake and tsunami despite significant drops in demand; JAL posted a 54.8% load factor for Mar-2011. This high base of capacity but low level of demand results in the Mar-2012 figure having growth significantly outpace capacity. JAL continued to stem capacity for Apr-2011 and by about May-2011 had achieved a balance. 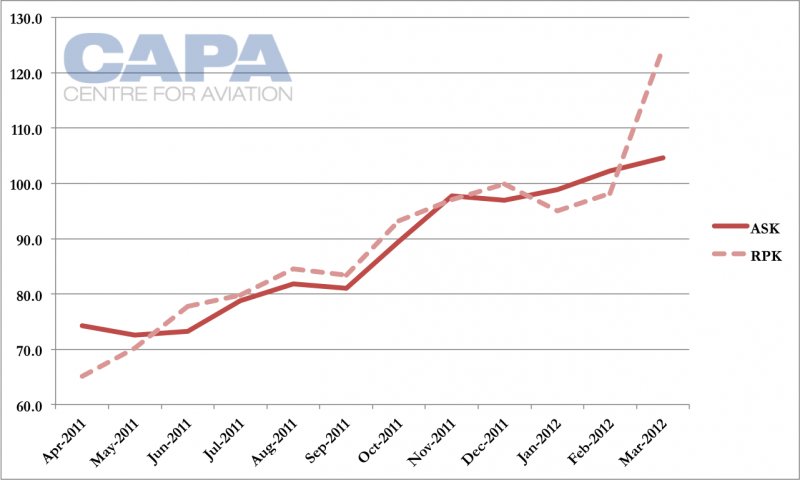 This uncertain demand combined with historically typical meagre domestic load factors will be exploited by the entry of more efficient LCCs and their inevitable partial cannibalisation. The result is JAL's projection of FY2012 profit shrinking to JPY150 billion from JPY204.9 billion. Revenues, buoyed by low single-digit capacity growth, are expected to grow modestly to JPY1220 billion from JPY1204.8 billion, indicating load factors will pick up at the expense of yield despite FY2012 offering yield recovery; FY2011's traffic figures were as robust as they were due to higher than normal discounting. (Yet a word of caution: both ANA and JAL posted full year profits significantly ahead of their own projections.)

JAL currently projects its 17% operating margin to drop in FY2012 to 12%, although that will still be slightly ahead of its earlier projection of 11.3% – and above much of the industry.

There is further concern for JAL's network with respect to the impact of LCCs when reviewing JAL's performance by international region. All of JAL's international markets saw decreases in capacity (only Guam saw a greater decrease in ASKs than RPKs), but the largest gap between the decrease in RPKs versus ASKs was Korea.

Peach, backed by ANA, launched in Mar-2012 and this month commenced services to Seoul while AirAsia Japan, also backed by ANA, is also expected to launch services to Seoul as part of its launch starting in Aug-2012. JAL's own LCC, Jetstar Japan, launched in partnership with the Qantas Group, has received its AOC ahead of Jul-2012 commencement of services, so far only on domestic services but is likely to expand to international points, including Korea, soon.

While capacity will initially be small – Peach in Jul-2012 is increasing services to three daily flights on 180-seat A320s – the LCCs will inevitably cause downward pressure on yields. 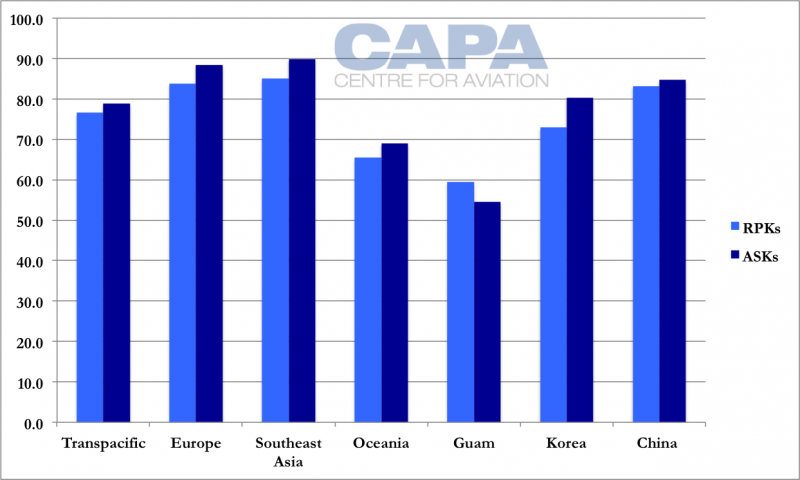 JAL international RPKs and ASKs by region (in thousands): FY2011 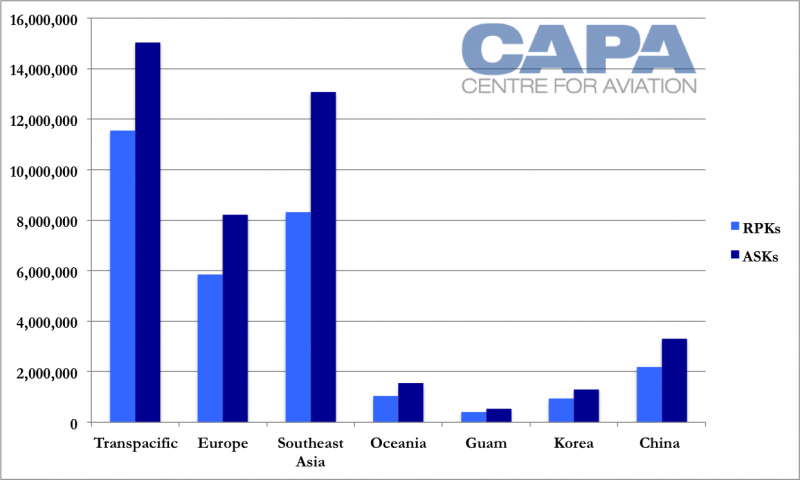 JAL is the more nimble of Japan's Big Two

The year to 31-Mar-2012 was the first time ANA eclipsed national carrier JAL on ASKs and RPKs, with ANA having 11% more system-wide RPKs and 16% more ASKs. 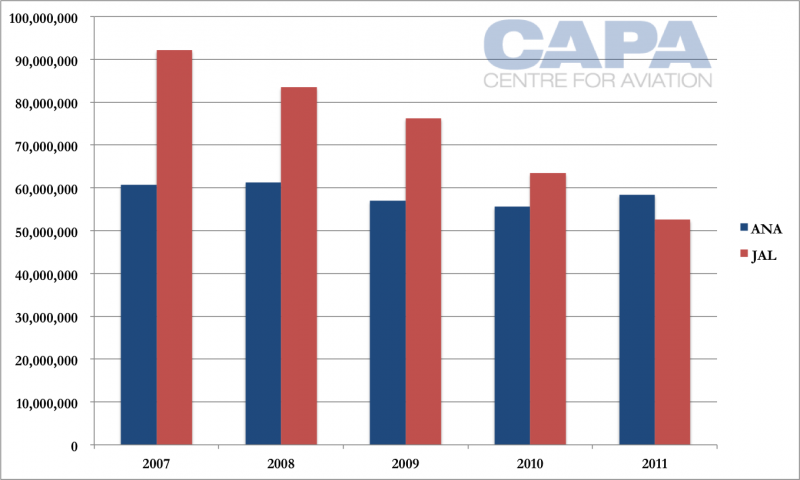 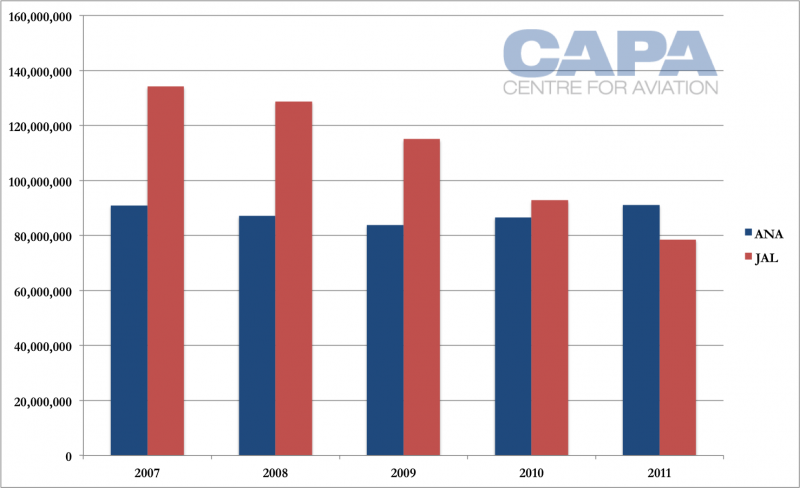 This led to the second year of ANA carrying more passengers than JAL. 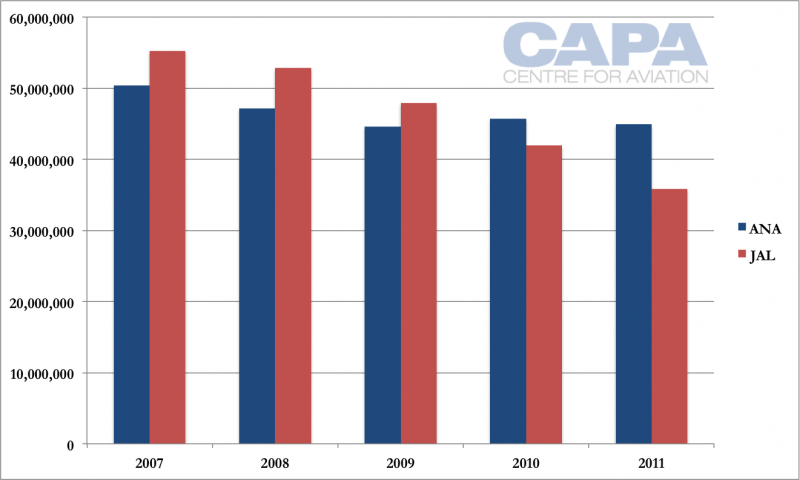 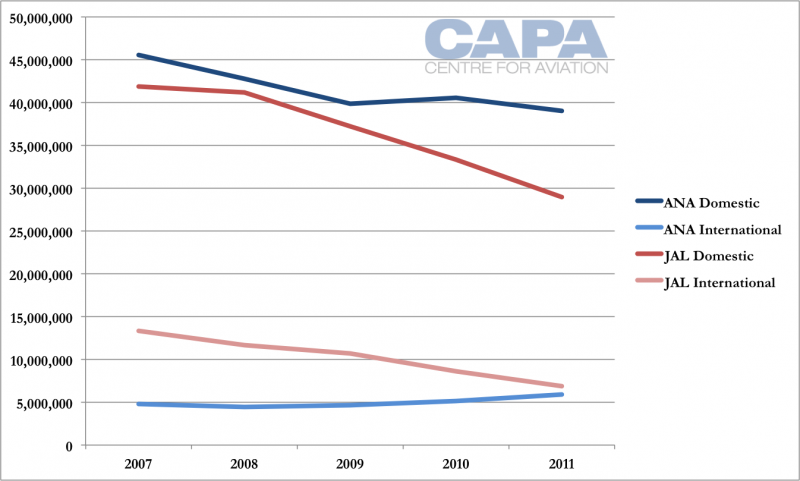 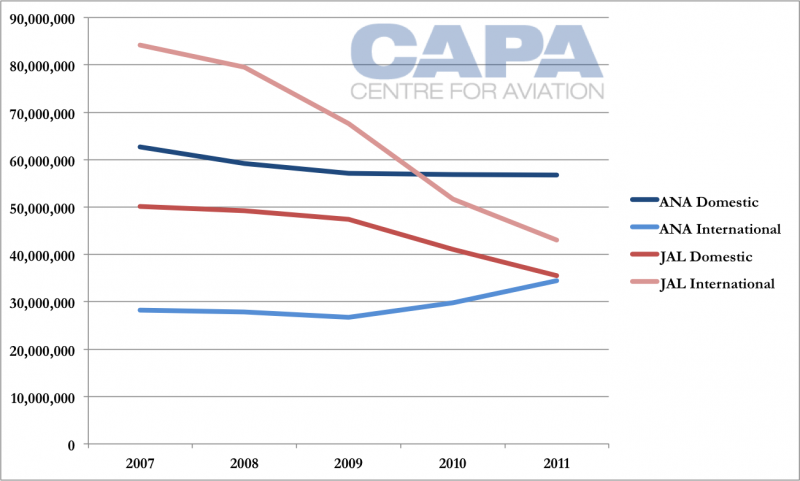 However, ANA's strength in numbers has not matched JAL's profit and margin position on the operating level. JAL's margin in FY2011 was 17% compared to ANA's 6.9%. JAL's projected margin of 12% in FY2012 will be ahead, but not as by much, of ANA's projected 7.3% margin in FY2012. Both carriers project a medium-term margin in excess of 10% – an accomplishment that will be severely tested by LCCs, which not only threaten the mainline carriers with cannibalisation but could force Japan's other transport options – namely the high-speed rail Shinkansen – to make competitive moves, such as price discounts or introduce dynamic pricing, that would result in ANA and JAL lowering fares, reducing profit and margin.

JAL's operating profit was once again over twice that of ANA, although ANA's JPY100 billion cost-cutting plan is showing benefits as it closes the gap with JAL. ANA aims to reduce its operating cost by JPY1 by FY2014, the end of the plan, at which point ANA projects – perhaps optimistically – it can re-gain its competitive edge over JAL. ANA last decade had been Japan's financially stronger airline, but JAL's bankruptcy restructuring allowed it to become stronger than its opponent, a process that has played out in the United States over the past decade. The affect of this in the US has been the same as in Japan: where nimble Southwest once had significant cost advantages over legacy carriers, it is now openly discussing how the gap has narrowed and it is under greater competitive pressure. JAL's bankruptcy restructure, like those of US carriers, allowed it to achieve efficiencies it would not have otherwise, to the chagrin of ANA. ANA CEO Shinichiro Ito this week remarked JAL's restructure "distorted the competitive environment," according to translations of local reports. He bemoaned the lack of a fair market.

The operating profit comparison of ANA and JAL is skewed as JAL's net profits last decade were considerably less pleasing than at the operating level – and were often significant losses that contributed to JAL's filing for bankruptcy in 2010 with over USD25 billion of debt. 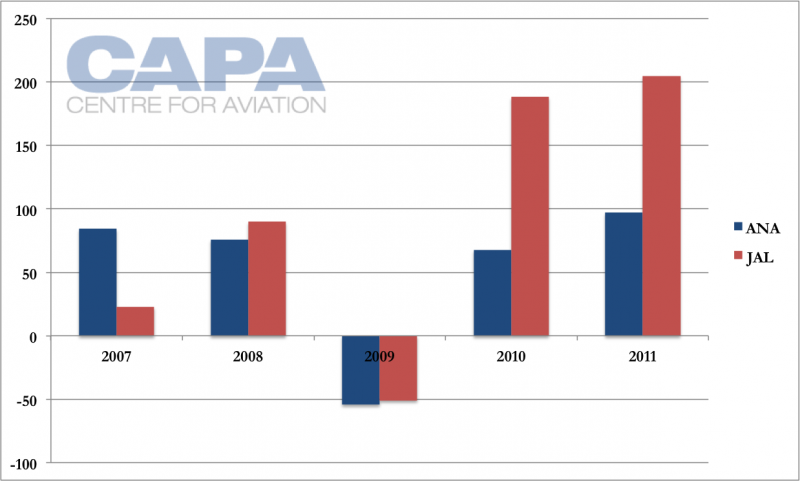 ANA expects to close the financial gap with JAL, with projections of a JPY110 billion operating profit in 2012 compared to JAL's JPY150 billion. ANA projects for FY2013 an operating profit of JPY130 billion to JAL's JPY140 billion. While ANA aims to slash its costs, it is also looking to boost revenues, in particular from international flights. ANA in FY2011 had 62% more domestic RPKs but 36% fewer international ASKs. It aims to narrow that gap, although by the end of FY2013 – currently the carrier's furthest projection – there will still be a noticeable gap. JAL is also planning to boost international ASKs through the end of FY2016, the furthest projection of its corporate plan. However, JAL's projections only include ASKs from codeshares, distorting its operational figures. That inflated growth, combined with genuinely high growth from ANA, could see ANA overtake JAL on international capacity too. 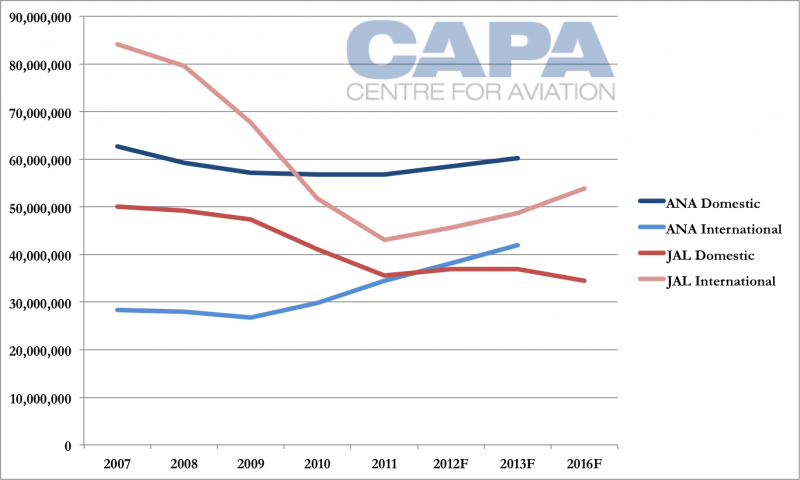 Source: CAPA - Centre for Aviation and airline reports
Notes: JAL figures include codeshares. JAL data for FY2014 and FY2015 not disclosed. ANA has not disclosed projections beyond BY2013.

Both ANA and JAL decreased their exposure to the domestic market following the Mar-2011 earthquake and tsunami, but JAL did so more immediately and effectively, cutting ASKs 20-30% throughout 1H2011 while ANA in the first half never decrease monthly capacity by more than 2.5%. As part of JAL's emergence from bankruptcy with support of oneworld partner American Airlines, and the trans-Pacific anti-trust joint-venture the two formed, American sharpened JAL's revenue management and capacity skills, allowing JAL to more immediately change capacity. As a result, JAL's domestic load factor for the year gained 0.8ppt while ANA's declined 3.1ppt.

On JAL's international network the largest change was the full year affect of not having ageing and fuel inefficient Airbus A300s and Boeing 747-400s, which JAL retired in Mar-2011. (JAL was once the world's largest operator of the 747 and had more 747s than many airlines had total aircraft.) JAL's international network, unlike ANA's, saw year-on-year decreases. In addition to managing capacity changes as a result of the earthquake and tsunami, JAL also said it had to match capacity following floods in Thailand. With the strengthening Japanese yen, JAL added capacity to the popular tourist destination of Hawaii. Tokyo-Honolulu is JAL's largest international route measured on available seats and ASKs. 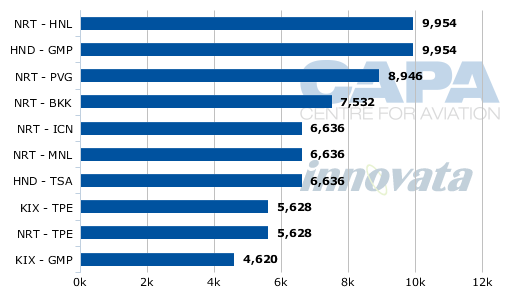 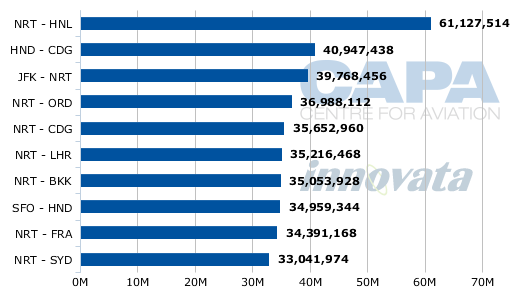 Network performance was enhanced, although JAL did not say by how much, via the Apr-2011 start of JAL's JV with American Airlines and subsequent codeshares with LAN and airberlin.

JAL's restructure saw it dispose of its dedicated freighter fleet, but increased demand on domestic cargo following the earthquake and tsunami, which closed surface transport, gave it an uplift beyond what it would have expected, although tonnage and revenue was expectedly down.

For FY2012, JAL spoke of "concerns" in the global economy due to the European financial crisis whereas ANA was more blunt on the subject, saying "we cannot expect high growth in the next fiscal year". The larger looming threat is the entrance of LCCs.

While JAL has so far shown more prudent measures than ANA to adjust to LCCs – such as by decreasing overall domestic size and shifting domestic capacity to regional centres – the impact of LCCs on Japan's transport network will be far higher than currently imagined.

Despite all the troubles FY2011 brought JAL, it is exceedingly difficult to picture the carrier experiencing a more positive environment in the medium-term.