Major airport hubs in Asia and the Middle East suffered less over 2009 than their counterparts in Europe and North America, but the year was anything but an easy. Of the world’s 50 busiest airports, just four reported growth in passenger traffic in 2009, according to CAPA.

Asia’s major hubs, heavily dependent on strong international traffic flows between Asia and Europe, suffered as their home carriers reluctantly pulled capacity from loss-making long-haul operations and tightened their belts in the face of fare and yield collapses, particularly for premium traffic.

DIA handled a record 40.9 million passengers last year, the vast majority of them international, and growth looks likely to continue through 2010. Dec-2009 passenger traffic at DIA was up 14.5% (albeit off slower than usual traffic in Dec-2008), continuing a trend of stronger passenger traffic growth from the bottoming in Sep-2008. Dubai Airports, which operates both DIA and AMIA, forecasts overall passenger growth of 13.6% in 2010, expecting to handle more than 46 million passengers. 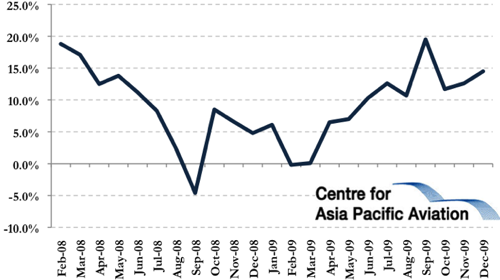 Emirates is clearly an engine of growth at DIA, controlling more than 40% of the capacity at the airport. But DIA's great strength is its increasing diversity of airline customers, with over 130 airlines now present. As such, the airport is far less reliant on its home airline than rivals Abu Dhabi (where Etihad controls 74% of capacity) and Doha (where Qatar Airways controls 57%). 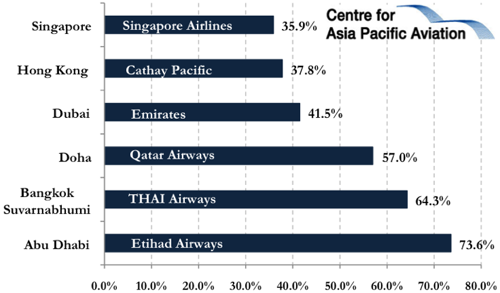 Emirates will drive growth at DIA for years to come, with the carrier set to remain at the airport, while LCCs and foreign carriers slowly migrate to AMIA. Emirates recently opened the new Emirates-dedicated Terminal 3 and Concourse 2.

Emirates has ambitions to become one of the world’s largest airlines, with massive orders already in place and a significant list of new destinations already planned for 2010. See related report: Emirates, Qatar Airways and Etihad Airways: Opportunities for airports as Gulf airlines expand

The carrier took delivery of ten widebody aircraft in 2009, including three A380s. Fleet growth for the airline in 2010 will continue apace, with Emirates scheduled to take delivery of eight A380s this year (40% of Airbus’ planned 2010 A380 production), as well as five other widebodies, mostly B777s. The carrier’s next A380 delivery is due towards the end of Jan-2010, with the remaining seven to be delivered by Nov-2010.

For the six months to 30-Sep-2009, Emirates increased passenger traffic by 18% year-on-year, while RPKs were up 21% and capacity (ASKs) increased 24%. However, along with most airlines globally, the carrier still suffered from lower passenger and cargo yields, particularly on services to Europe and Asia, dragging revenue down 13.5% in the six-month period.

Emirates only added two new routes (Durban and Luanda) over the past six months, but is due to launch services to Tokyo, Amsterdam, Prague and Madrid this year. Other destinations are expected to be announced as the year progresses.

Also underpinning Dubai’s growth in passenger traffic has been the mid-year launch of LCC, flyDubai, which has quickly grabbed 3% of the traffic at DIA. The carrier, which was supported by Emirates until its launch of operations in Jun-2009, has already expanded operations to 11 destinations, and taken its fleet from one to six B737-800s.

Like Emirates, flyDubai will row aggressively in 2010. Its initial round of routes were launched primarily to Middle East destinations, mostly outside the Gulf Cooperation Council, and most offer direct competition with Emirates.

Its recent routes have been further afield, including Eastern Europe and the Indian Subcontinent. flyDubai plans to operate to destinations within approximately 4½ hours flight time of Dubai, giving it a potential catchment of 2 billion people, thanks to Dubai’s central location between Europe and Asia.

Hong Kong: Shrinking in all categories in 2009

For the full year, passenger numbers fell 5% year-on-year to 46.1 million, while cargo tonnage dropped 7.7%, to 3.35 million tonnes. With such heavy reductions in traffic, aircraft movements into Asia’s largest international hub were down 7.2%, to 279,505. 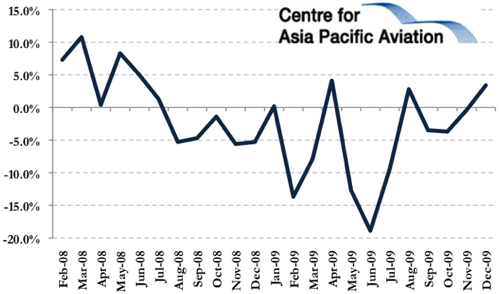 The decline at HKIA has slowed through the year and Dec-2009 saw across-the-board improvements in all traffic categories (albeit off a weak base in Dec-2008).

Dec -2009 passenger numbers were up 3.4% (to 4.2 million), which the airport authority attributes to a strong 16% increase in travel made by Hong Kong residents. Visitor numbers into Hong Kong grew 4%. However, transfer and transit passengers declined 6%, a sign that the airport is still suffering from the downturn in long-haul traffic, particularly between Europe and Asia, as a result of the Global Financial Crisis, which decimated premium travel to/from Hong Kong.

Cargo traffic is making a strong recovery at HKIA, a good lead indicator of an underlying global economic recovery. Dec-2009 cargo traffic rose 35.5% year-on-year, to 330,000 tonnes, after cargo collapsed in Dec-2008, with throughput contracting 28.2% to 243,000 tonnes (the largest single month drop since the airport opened in 1998). Cargo throughput at the airport is now only slightly down on 2007 levels.

The dominant carrier at Hong Kong, Cathay Pacific, has maintained a relatively cautious viewpoint for 2010. The carrier reported a 1.6% drop in passenger numbers in 2009, and a 1.7% fall in RPKs, but improving traffic, and more crucially yields, over recent months have improved its outlook.

CEO, Tony Tyler, warned recently that if IATA’s forecasts for 2010 are correct, "it's not going to be an easy ride”. Mr Tyler added the carrier’s recovery is “likely to be slow and gentle at best”. Cathay Pacific noted during Dec-2009 that the core problem has been the “precipitous drop in yields due to the premium demand collapse and intense pricing pressures in the economy cabins.”

The rapid expansion of cross-Strait services between Taiwan and Mainland China and Japan's deep recession have not helped the plight of Cathay or the Hong Kong hub, with Northeast Asian capacity still depressed. The carrier’s Dec-2009 passenger data shows traffic into China, Southeast Asia and the Middle East are rising, with more muted growth into North America. However, passenger numbers in the Pacific (dominated by Australia) were virtually flat, while European traffic in Dec-2009 was down by 2.3% year-on-year. 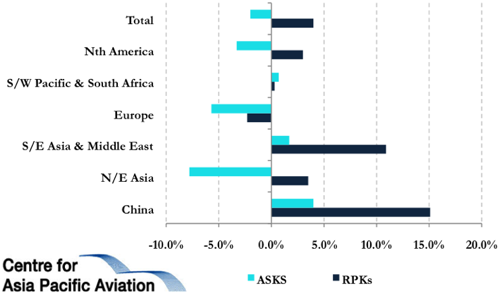 2009 was the “year of the low cost carrier” for Singapore Changi International Airport. Over the year, the airport reported passenger traffic of 37.2 million, down 1.3% year-on-year, a reduction of approximately half a million passengers. While network airlines at the airport, such as home carrier, Singapore Airlines, reduced capacity, LCCs continued their strong growth trajectory.

As the year progressed, SIA has managed to cut capacity below the decline in traffic, and the recovery in demand continues to reflect the recovery trend in the global economy. 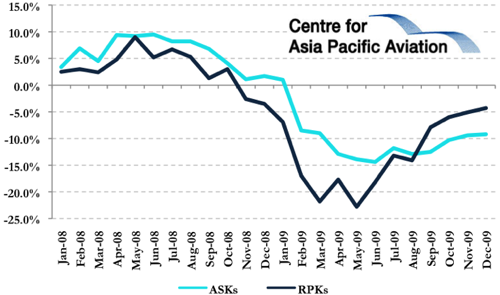 Despite the pressure that the airport came under during the year, with the dual crises of the global economic downturn and the H1N1 outbreak to deal with, there were several bright spots during the year.

Ongoing Southeast Asian regional liberalisation efforts helped to offset some of the damage rendered by global events. Traffic between Singapore and Malaysia jumped 42%, following the signing of a new air services agreement between the two countries in late 2008, which allowed LCCs such as AirAsia, Jetstar Asia and Tiger Airways onto the key Singapore-Malaysia routes.

The Singapore-Kuala Lumpur route quickly became the most heavily trafficked route from Changi, while Jakarta took the number two spot. The five sectors with the most added flights in 2009 were Kuala Lumpur, Penang, Jakarta, Manila and Denpasar (Bali). Phuket also registered strong growth. Traffic to the United Arab Emirates also grew in 2009.

Six new airlines (including Kingfisher and Firefly) launched operations to the airport, and 14 new destinations were added to/from Singapore.

Much of the growth to regional destinations was due to surging LCC activity, which added to their traffic at the airport by more than 55% over the year. In 2009, LCCs accounted for 19.1% of passenger traffic (up from 12.3% in 2008) and 23.6% of aircraft movements (15.7% in 2008). Low cost carriers now account for five of the ten largest carriers at Changi. 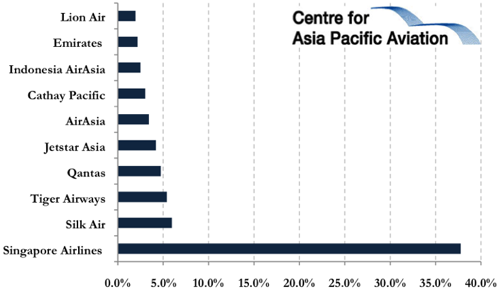 2009 ended strongly for Singapore Changi, with the airport reporting a record 3.83 million passengers for Dec-2009. A “better than expected” last five months of 2009 helped to soften the blow of the downturn in the first half of the year. 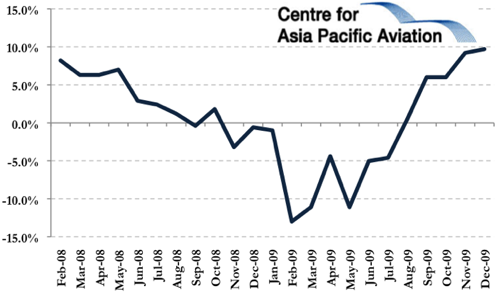 Changi is now beginning 2010 on a “strong footing”, according to CEO, Lee Seow Hiang, who expects the improving global economy and tourism developments in Singapore to have a “positive impact” on Changi’s performance this year.

Battle of the hubs: Dubai setting sights on rival hubs

The global financial crisis and the subsequent recession have allowed DIA to close in quickly on its rival international passenger hubs.

Dubai to become third busiest international hub after Heathrow and Paris by 2011?

DIA will continue to rapidly narrow the gap in terms of international passenger numbers to long-established hubs such as Frankfurt, Hong Kong and Amsterdam. DIA has consistently expanded passenger traffic by better than 10% p/a over the past decade. With Emirates projecting capacity increases of 14% for FY2009/2010 and similar rates of expansion going forward, flyDubai expanding rapidly and other foreign airlines flying in, Dubai Airport could come close to overtaking Frankfurt, Hong Kong and Amsterdam by the end of 2010 (but most probably by the end of 2011) to become the world's third busiest international airport.

Europe’s path to recovery is expected to be slower than other regions, meaning DIA will continue to swiftly gain on Amsterdam and Frankfurt as an international hub. Lufthansa CEO, Wolfgang Mayrhuber, stated this month that he expects faster growth in the US and Asia than in Europe over the coming years.

In Asia, Hong Kong’s two-year contraction in traffic is expected to end in 2010, with the return to double-digit growth of the Chinese economy in 4Q2009 and increasing levels of integration between Hong Kong and the Pearl River Delta regions. But traffic growth rates in Hong Kong will probably be slower than Dubai's, owing to a lack of LCC momentum and the still fragile core premium Hong Kong travel markets.

The mantle of the world's third biggest international airport is there for Dubai's taking.