Corporate travel demand in the Southeast Asia-Europe market appears to be on the rebound but competition continues to intensify as more carriers jockey for a slice of the corporate spending pie. There are also signs of improvement in the much smaller Southeast Asia-North America corporate travel market, which has become more competitive as Singapore Airlines (SIA) pulls its exclusive non-stop services to Newark and Los Angeles.

Capacity levels for non-stop services between Southeast Asia and Europe are up only slightly on a year-over-year basis as Asian carriers have been focusing more on expanding regionally. But the number of players in the non-stop market is expanding while one-stop capacity via the Middle East continues to grow, putting pressure on the overall market.

The competitive pressures could keep premium and corporate fares from increasing as demand returns.

SIA sees improvement in corporate demand in Europe and US

Singapore Airlines (SIA) executive vice president commercial Mak Swee Wah told analysts during the carrier’s 2QFY2014 results briefing on 13-Nov-2013 that corporate demand in Europe has stabilised while in the US there are signs of improvement. “In terms of corporate markets in these two major areas hopefully we have seen the worst and things hopefully will bottom out or are coming back. And that is reflective in our bookings out of both Europe and the US,” Mr Mak said.

SIA’s average passenger yields (across both cabins) have dropped for seven consecutive quarters. As CAPA reported earlier this week, SIA yields are now only at slightly higher levels than 2010, when the carrier was impacted by the global financial crisis.

SIA does not break down yields or load factors by region. But SIA CEO Goh Choon Phong said “we do see some downward pressure in parts of Europe and certainly in Australia in part because there has been so much capacity added into the Australia market”.

SIA also does not break down yields or load factors by cabin but it appears the downward pressure is more driven by increased promotional activity for economy fares. “We do see our premium load factor holding up well,” Mr Mak said. “Looking at forward loads the premium cabin bookings are still healthy and we expect this to remain.”

SIA capacity to Australia is up approximately 20% year-over-year while its capacity to Europe is up less than 10%, according to CAPA and Innovata data. The broader Southeast Asia-Australia market also has seen large influxes of capacity from other Asian carriers, particularly Malaysia Airlines and AirAsia X. Qantas also has increased the number of seats available to the local Southeast Asia-Australia market as it has moved the stopover of its Europe flights from Singapore to Dubai. As CAPA analysed in Sep-2013, the Australia corporate market overall has benefitted from the intensifying competition.

In addition to the only marginal increase in Europe capacity for SIA, Thai Airways capacity to Western Europe is relatively flat while Malaysia Airlines (MAS) capacity has increased over the past year by about 12%, based on CAPA and Innovata data for Nov-2013 and Nov-2012. Thai Airways is the largest carrier in the Southeast Asia-Western Europe market, followed closely by SIA.

There are also nine European carriers operating non-stop flights to Southeast Asia. But as in the case with Southeast Asian flag carriers, the capacity increases from the European full-service carriers over the past year has been relatively modest. Norwegian is a new entrant and the only low-cost carrier currently in the Southeast Asia-Europe market, operating 787s in two-class configuration from Bangkok to Stockholm and Oslo.

The overall capacity figures also do not show the disproportionate impact on certain important premium markets such as London. Southeast Asia-London non-stop capacity is up nearly 20% over the last 13 months from about 28,000 one-way seats in Oct-2013 (excluding Qantas) to about 33,000 one-way seats currently. (Qantas moved the stopover of its two daily London flights from Singapore to Dubai in Mar-2013 but an overwhelming majority of passengers on the Singapore-London leg were heading to or from Australia.)

The increase in capacity to London has been driven by MAS up-gauging both of its London flights to the A380, the introduction of a fourth daily frequency to London by Singapore Airlines and the launch of London services by Philippine Airlines (PAL). PAL on 4-Nov-2013 launched five weekly non-stop flights from Manila to London Heathrow, becoming the fifth Southeast Asian carrier with non-stop services to Europe after Thai Airways, SIA, MAS and Vietnam Airlines (all of which serve London).

Garuda and PAL are both pursuing expansion in Europe using 777-300ERs. While these carriers have not traditionally been significant premium or corporate players, they have invested in improving their premium products and are keen to start attracting more corporate traffic. Garuda even has re-introduced a first class product with its new 777-300ER fleet. Garuda is also in the final stages of entering the SkyTeam Alliance, which should make the carrier more appealing to potential corporate customers.

Garuda and PAL both have ambitions to launch other non-stop routes to Europe following London, with Frankfurt and Paris among the destinations targeted by both carriers. This should lead to intensifying competition in these markets from Southeast Asia, putting more pressure on the incumbents. While market conditions in Europe seem to be improving for corporate travel, as it is coming during a period of new airlines entering the market and some existing players adding capacity, there will likely be no slowdown in the battle for corporate accounts.

Premium passenger traffic between the Far East (includes Southeast Asia and North Asia) and Europe (includes Eastern and Western Europe) has been up on a year-over-year basis all but two months so far in 2013, according to IATA data. The Far East-Europe market accounts for about 8% of total premium traffic and about 15% of total premium revenues, according to IATA data. 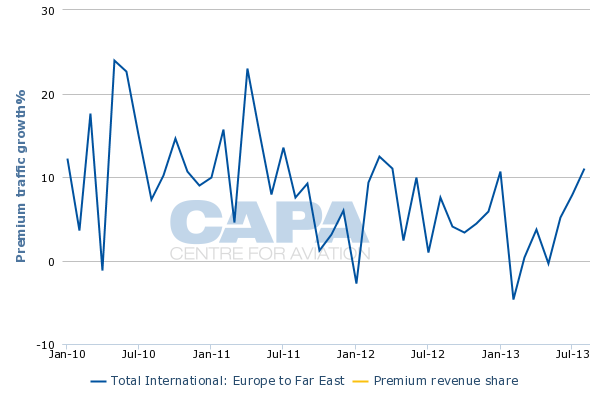 Southeast Asia-North America is a harder market to track as it’s almost entirely served by carriers offering one-stop products. The only exception has been SIA’s non-stop all-premium A340-500 services to Los Angeles and Newark. But Singapore-Los Angeles, which has been the second longest non-stop route in the world, was terminated in Oct-2013 while the last flight from Singapore to Newark, the longest non-stop route, will operate on 24-Nov-2013.

SIA had operated Singapore-Los Angeles five times per week and Singapore-Newark daily until 2Q2013, when it started scaling back frequencies ahead of the planned termination of the routes. (Next week the Newark flight will only operate twice, on 22-Nov-2013 and 24-Nov-2013.)

SIA one-way business class seat weekly capacity by US destination: before and after termination of non-stops

Mr Mak acknowledges the termination of the non-stop all business class services will have an impact because “those two routes have been well supported by the corporate market”. But he points out the reduction in premium capacity will be partially offset by switching to the less dense of SIA’s two A380 configurations and “we will continue to work hard to secure corporate accounts in the US. The teams there are working to making sure that the proposition is strong.”

He added: “We were the only non-stop. Without the non-stop we will compete with all the other one-stoppers – just like in all other markets where we compete and have to fight for the corporate business based on the whole package of corporate benefits.”

The end of the non-stops essentially levels the playing field in the Southeast Asia-US corporate market, leaving SIA fighting off a long list of competitors as it does in the Southeast Asia-Europe market. SIA remains the leading premium carrier in Southeast Asia and has a strong position in the corporate segment globally. SIA is investing heavily in trying to retain its share of the corporate and premium markets, introducing new premium cabin product which debuted on some Singapore-London flights in Sep-2013.

But competition in the corporate sector is as intense as ever, including on long-haul routes to and from Southeast Asia. Market conditions may finally be improving after a challenging few years in which corporate travel spend has been on the decline. But higher capacity levels and new competitors means the fight for the corporate pie is not about to get any easier.

09.05: Keynote Address: Global travel, changing at the speed of sound

11.15: Air Procurement: The big headaches and frustrations – are they curable?

12.30: Safety & Security - Now a must have on everyone’s program agenda

14.30: Where the Rubber meets the Rail: The high speed rail challenge (and opportunity) for airlines and corporate travel 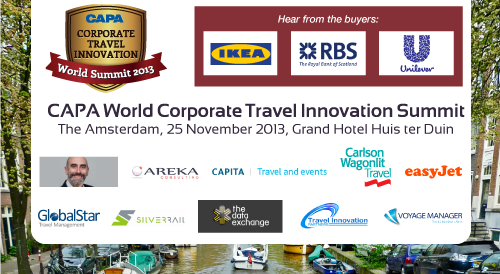