Corporate travel remains a critical sector for airlines but rapid change is making it increasingly challenging to navigate for both buyers and suppliers. Competition is intensifying as full-service carriers continue to introduce product improvements and as an increasing number of low-cost carriers start to target corporate buyers. At the same time corporate buyers are seeking to cut costs and leverage new technology to make smarter travel decisions while taking advantage of the cut throat competition.

The initial Corporate Travel Innovation Summit on 9-Aug-2013 focused on the rapid changes in the Australian marketplace. The 25-Nov-2013 Summit will examine the global changes shaping the corporate travel sector, which are impacting airlines as well as air procurement managers, and the global outlook.

The Australian market in many respects represents a microcosm of the global corporate travel sector as it benefits from intensifying competition. Gulf carriers have been rapidly expanding in Australia and have been aggressively targeting the corporate sector. Global alliances have also been focusing on increasing their penetration in Australia while two new individual high profile bilateral alliances, Qantas-Emirates and Virgin Australia-Singapore Airlines, have significantly changed the dynamic of the international corporate market. Australia’s domestic corporate market has seen an even bigger shake-up with the ambitious corporate push from Virgin Australia.

Association of Corporate Travel Executives (ACTE) Regional Director - Australasia Andrew Kelly pointed out at the summit in Sydney that while global corporate spend was down nearly 5% in 2012, the Australia corporate market was still up slightly. “It shows real strength in our marketplace,” Mr Kelly said.

Cathay Pacific Airways sales and marketing manager for Australia Julie Reid said spending from Australia’s government sector has been particularly strong over the last year although the manufacturing sector remains down.

Working against Australia is the “startling” high cost of travel in the country. Mr Kelly pointed out that Brisbane, Sydney and Perth are among the world’s four most expensive cities for travelling. Tokyo is the only non-Australian city on this list.

Qantas executive manager sales and market and distribution Steve Limbrick told the summit that the corporate travel market in the Asia-Pacific region remains dynamic with rapid change. “In Asia it’s about adapting to the opportunities,” he said.

Virgin Australia’s aggressive pursuit of growing its slice of the corporate travel pie in particular has led to rapid changes in the Australian market. “In this business, particularly in aviation, the sands can shift very, very rapidly,” said Jetset Travelworld CEO Rob Gurney.

It comes as no surprise that corporate travel buyers have thoroughly enjoyed the battle Virgin Australia has picked with market leader Qantas. “Competition is good for the market,” said Carlson Wagonlit Travel Managing Director of Australia and New Zealand Peter Brady. “We can’t underestimate the transition they’ve gone through and the costs of the transition from low cost carrier to full service carrier.”

Mr Brady added Virgin’s corporate growth targets were probably overly ambitious “but we are all a little ambitious. What we have now is a more competitive market.”

Qantas’ Mr Limbrick said that Qantas still has a strong position in the corporate market and continues to invest heavily to improve the experience of its corporate passenger, including at the airport. “This is an extremely competitive market,” he said. 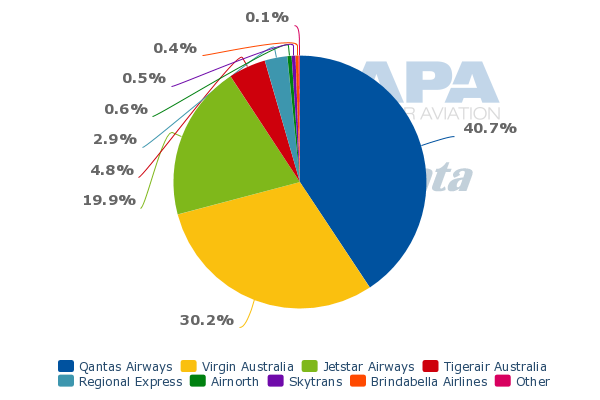 The intensifying competition has resulted in over-capacity in some domestic routes as well as in some international markets, which corporate travel spenders have been quick to exploit. But the panellists said the capacity situation is route specific and overall the market is healthy.

As in other markets, corporate travel sellers in Australia have seen a drive to cut costs since the onset of the global financial crisis in 2008. Several companies during the GCF adjusted their policies for business class travel and continue to require that their employees fly economy rather than business for most flights. Mr Brady said he has not noticed any relaxation of these policies and instead sees efforts to increase compliance.

Employees now often arrive at their destination earlier, taking a daytime flight in order to have a full nights’ rest before starting meetings. Business class is generally still authorised for employees taking overnight flights and heading straight to meetings after arriving. But the preference is to save by purchasing daytime flights in economy as an extra nights hotel cost is small compared to the price gap between business and economy.

Panellists said corporate travel buyers have also been working on keeping down costs by controlling bookings. Another trick often used by buyers in Australia is to buy tickets in other countries, recognising the disparity in fares purchased in Australia compared to other markets. Multinational corporations are particularly well adept at avoiding higher local fares.

Corporate buyers have also been able to reduce costs by relying more on online bookings. Reducing leakage is another common tactic for keeping down costs. FcM Travel Solutions head of global sales Rob Dell said many organisation continue to suffer from leakage but there are ways for companies to step up and control these costs.

Improvements in technology are enabling corporations to find the lowest fare and make sure employees follow the rules. “Technology is emerging to the point where that cost is going down,” said Macquarie Group travel and entertainment global lead Douglas Marcotte.

As online purchasing becomes more common, employees are becoming more empowered, taking over in some cases from the travel agents. Mr Gurney from Jetset Travelworld said the empowerment opportunities for the consumer are “challenging traditional models and how we adapt to that is absolutely critical”.

Ms Reid from Cathay Pacific agreed, saying “the consumers all have become travel agents”. She points out more consumers these days are aware of what type of aircraft and seat are used on certain routes, what the flight schedules are and which hub they are flying through.

Global alliances have made efforts in recent years to jointly pursue corporate accounts. Star has particularly made a move at the alliance level in Australia, hoping to eat into a larger share of a corporate market that had traditionally been dominated by Qantas and its partners.

But so far the alliance corporate sales initiatives have had relatively limited success. Singapore Airlines choosing not to participate in the Star campaigns in Australia has shown that the alliances are not totally united. 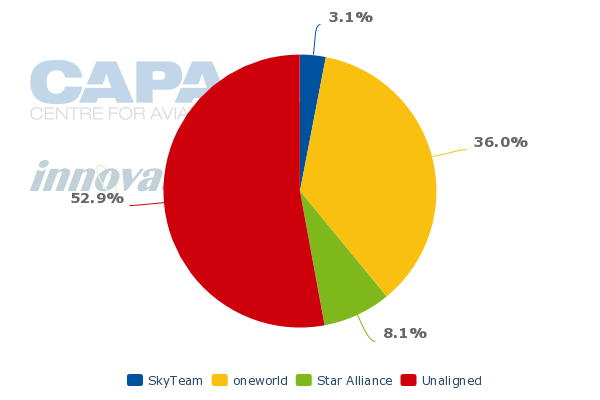 Mr Marcotte said Macquarie has noticed fragmentation and a lack of alignment and empowerment when it comes to negotiations with global alliances. He called negotiations with some carriers in an alliance setting frustrating, explaining there is significant variation between carriers in the alliance and some members are more aligned than others.

The speakers also strongly suggested that corporate buyers issue requests for proposals from airlines and alliances rather than pursue ad hoc negotiations. Ultimately RFPs result in the buyer securing better prices, according to Santos corporate procurement manager Zarina Carty. “If you have an opportunity to do an RFP you should take it,” she said. “Competition is key.”

Microsoft global travel sourcing manager Georgie Farmer advised against market share clauses, saying they were becoming less common in contracts. “I think times are changing,” she said. “If the product and service is good it will get market share.”

LCCs on the rise

Another major trend discussed at the Sydney event and will come up again in Amsterdam is the increasing use of LCCs by corporate buyers.

Travelport general manager for the Pacific region Alexandra Fitzpatrick pointed out that if 10 years ago she was told that easyJet would set up a corporate division and distribute through global distribution systems she would have thought you were mad. But in recent years an increasing number of LCCs are getting into the GDSs. “We are seeing more of that,” she said, but added that “not every LCC is the same” and some LCCs continue to stay away from pursuing corporate travellers.

Santos’ Ms Carty predicted that over time corporate buyers in Australia will start to rely more on low-cost carriers in the domestic market. “To keep people travelling they have to consider LCCs domestically,” Ms Carty says. She added that in other domestic markets such as in the UK and Europe corporate buyers have already started using LCC and that in time this trend will spread to Australia. 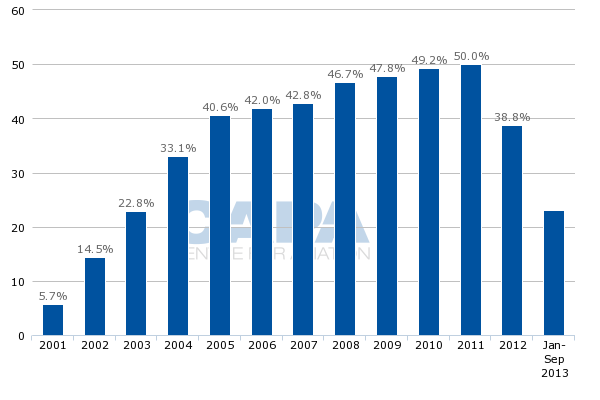 Note: reduction in LCC share since 2011 driven by transition of Virgin Australia to full-service from low-cost model
Source: CAPA – Centre for Aviation with data provided by OAG

Glencore’s Mr Oliver also sees LCCs continuing to expand their penetration of the corporate sector, pointing out that “sometimes the only way from point A to point B is with an LCC”.

Ms Farmer said Microsoft saw a need to use India’s largest LCC, Indigo, after, Kingfisher ceased operations. Microsoft, which has a large operation in India, asked Indigo to plug into its online booking tool. In this case Microsoft has the control and is able to access the inventories it needs.

Mr Marcotte told the summit that Macquarie conducts a global analysis to determine which carriers fit their needs and will use LCCs as long as the carrier meets its requirements. But he stressed that corporate buyers need a seamless procedure to find and buy a fare from an LCC. If this proves burdensome, the indirect cost of buying from an LCC makes it not worthwhile to pursue.

Indeed the biggest issue when it comes to LCCs penetrating the corporate sector is the ability of corporate buyers to access their content or inventories. Corporate travel buyers do not want to waste time looking for the cheapest ticket. But in markets such as India, where LCCs now account for over 50% of the domestic market, they want the opportunity to do business with an LCC in a seamless manner.

FSCs will continue to capture most of the corporate market

LCCs could soon control a majority of short-haul capacity in the Asia-Pacific region given their larger order books compared to full-service carriers. But that doesn’t mean they will dominate the market, particularly when it comes to the corporate sector.

“I think there is a balance. I firmly believe a corporate traveller needs product and needs schedule,” said Cathay’s Ms Reid. She adds corporate customers need not only frequency but to know that if their aircraft goes tech there is a spare aircraft available to operate their flight.

Qantas’ Mr Limbrick agrees, saying for a corporate traveller on-time performance and the ability to recover in the event of disruption is very important. But there is a role for LCCs in the corporate sector as some routes, including some in the Australian domestic market, do not have the scale to support a full-service carrier.

The experiences in the European and North American markets have proven that LCCs can successfully penetrate the corporate sector by providing a customer experience which is close to or on par with full-service carriers. This trend is just starting to spread to Asia-Pacific, stimulating further change in the region’s dynamic corporate sector.

Following the successful formula of the Aug-2013 event in Sydney, the World Corporate Travel Innovation Summit on 25-Nov-2013 will start off with a Corporate Travel Outlook panel and conclude with a large panel of 10 executives giving their take on what keeps travel executives awake at night.

There will also be panels on air procurement and high speed rail. Speakers from all cross-sections will be involved, including buyers, suppliers, OTAs, TMCs and technology firms. Registration is now open with special early bird discounts. Sponsorship opportunities are also available. Contact CAPA chief operating officer Derek Sadubin at ds@centreforaviation.com for more information. 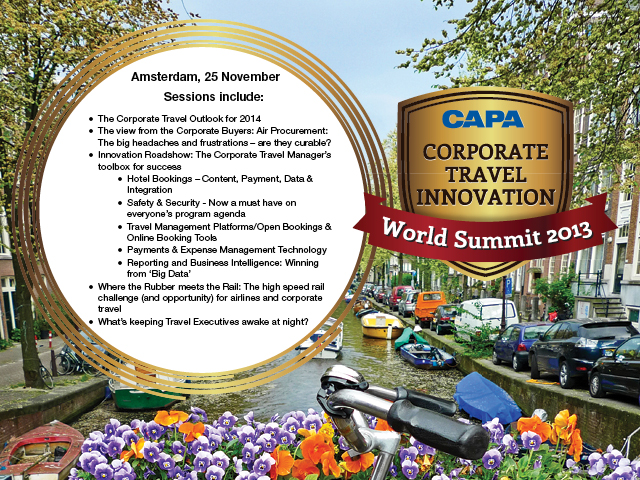