Singapore Airlines (SIA) will have to again rely entirely on one-stop flights to serve the US market after its exclusive all-premium non-stops to Los Angeles and Newark are dropped over the next two months. The carrier will lose a competitive advantage, leaving it to compete with a large group of carriers that also offer one-stop products in the Singapore-Los Angeles and Singapore-New York markets.

SIA’s total capacity in the US market will drop by a projected 16% to about 22,000 weekly seats. As a result SIA stands to lose its status as the fifth largest Asian carrier in the US and drop four places to ninth position.

More significantly, the number of premium seats SIA has in the US market will drop by at least 26%. Economy seats will drop by up to 12% as SIA is expected to mitigate the premium reduction by transitioning its one-stop New York and Los Angeles services from 471-seat A380s to 409-seat A380s.

This is the second in a series of reports analysing the upcoming termination of Singapore Airlines’ flights to the US. The first part looked at how discontinuing the world’s only four flights over 16hrs 30mins could spell an end to ultra long-haul travel.

SIA has provided all-premium services to the US since 2008

Singapore-Newark is operated daily with all-premium 100-seat A340-500s, providing 1,400 business class return seats per week. Singapore-Los Angeles is operated five times per week with A340-500s, providing 1,000 weekly return seats. The Los Angeles service was reduced from daily to five weekly flights in May-2011. During the global financial crisis both Los Angeles and Newark operated for an extended period at five weekly flights.

SIA launched both routes in 2004, initially using a two-class configuration with 117 premium economy and 64 business class seats. Its niche fleet of five A340-500s, which are only used on the two routes, were re-configured in 2008 to an all-premium layout with 100 business class seats.

On 27-Sep-2013 SIA placed into service a new business class seat which represents a relatively modest improvement over the seat introduced in 2006. The new 28in wide seat is currently only installed on the carrier’s two newest 777-300ERs and is available on some flights between Singapore and London Heathrow. These two 777-300ERs have the identical configuration of the carrier’s original 19 777-300ERs – with eight seats in first, 42 in business and 228 in economy – but the newest 777-300ERs have improved seats and in-flight entertainment systems in all classes. SIA has so far only committed to configuring eight 777-300ERs, including the two recently delivered aircraft, with the new cabin products.

SIA currently operates five one-stop routes to the US, three using the original 19 777-300ERs and two using its fleet of 19 A380s.

Currently SIA’s seven US routes (including the two non-stops) give the carrier 26,152 seats to and from the US. This makes SIA the fifth largest Asian carrier in the US after Korean Air, Japan Airlines, All Nippon Airways and Cathay Pacific Airways.

SIA has been able to establish a larger presence in the US market than several other North Asian carriers – including Asiana, both of Taiwan’s main carriers and all three Chinese majors – despite having a disadvantaged geographic position. North Asia is much closer to the US and can be reached from both the US east and west coast with normal long-range widebody aircraft. With the exception of the Philippines, Southeast Asia can only be reached non-stop from the US with aircraft designed specifically for ultra long-range missions, the A340-500 and 777-200LR.

But such ultra long-range flights are nearly impossible to operate profitably at current fuel prices. SIA tried the flights for eight years, including four years with a mixed configuration and four years in all-premium configuration, before making the decision in Oct-2012 to phase them out by the end of 2013 along with the A340-500 fleet.

SIA has decided at least for now against adding any one-stop flights to the US to compensate for the loss of the all-premium flights. This is in line with its overall strategy to reduce its reliance on the relatively weak long-haul market and instead focus more on expanding within the stronger Asia-Pacific region.

While it has pursued very limited expansion of its European operation and reduced capacity to the Middle East and now North America, SIA has been adding mainline capacity within Asia-Pacific, particularly Australia, India and Indonesia. SIA also has been growing within Asia-Pacific by accelerating expansion at its full-service regional subsidiary SilkAir and at the budget end by establishing new medium-haul low-cost subsidiary Scoot and increasing its involvement in short-haul low-cost affiliate Tigerair.

The decision to cut the non-stop flights to the US will see it lose a share of the US-Southeast Asia market. But this is no longer a strategically critical market for SIA and it is a market that has become very competitive.

In the Singapore-New York market, currently 20 carriers offer one-stop products in addition to SIA. This includes eight carriers from North Asia, two from the US (which also serve Singapore via North Asia), six from Europe, three from the Gulf and one from India. Most, but not all, of these carriers offer convenient connections that are not much longer and in some cases even shorter than SIA’s one-stop flight to New York JFK via Frankfurt.

Several carriers, including Delta, have been making a push to market their premium services in the Singapore-New York market in an attempt to fill the void left by SIA. Cathay Pacific and Emirates are probably best positioned to take on passengers as they offer multiple frequencies. Cathay Pacific has three non-stops from New York JFK to Hong Kong, all of which connect to flights to Singapore, and is launching a Newark service in 2014. Emirates has two daily non-stops from New York JFK to Dubai and three non-stops from Dubai to Singapore.

SIA will likely cede to other carriers at least half of the passengers that were travelling on its non-stop US flights. On average SIA’s A340-500s were carrying 385 one-way passengers from Los Angeles per week and 532 one-way passengers per week from Newark (based on the carrier’s average load factor in 2012 of 77% from Los Angeles and 76% from Newark). While this is not a huge number, these are high yielding premium passengers and even if other carriers grab only 10% of the traffic that SIA spills it can make a difference between a three-quarters full and full business class cabin, which in turn could make the difference between an unprofitable and profitable flight.

SIA plans to use lower density A380s on US routes

SIA will attempt to keep as many of its non-stop US passengers as possible by using its existing one-stop products. But SIA will not have the premium capacity to keep all passengers. It will likely focus on trying to retain its most loyal passengers and passengers from key corporate accounts.

On some routes SIA shifts around its two A380 sub-fleets depending on the season. But so far SIA has only used the original 471-seat configuration on the Los Angeles and New York routes. This shows the carrier has not had a need for more premium seats in these markets because most of its premium passengers heading to or from New York and Los Angeles preferred the faster non-stop service.

Assuming SIA switches to the 409-seat A380 on its one-stops from Los Angeles and New York as expected, SIA will see the number of premium seats it offers in the US market drop 26% from 6,316 per week currently to 4,644. Not switching to the 409-seat A380 would result in SIA losing 728 additional premium seats per week and a total drop of 38%. SIA would want to avoid such a large drop given its position as a premium carrier. While the US is no longer as strategically important to SIA as it was in earlier eras, it is still an important premium market.

The switch in A380s would result in a 12% drop in economy seat capacity in the US market to 17,372 weekly return seats. But this is manageable and would allow SIA to boost economy load factors and yields.

There is room for load factor improvement on SIA’s flights from New York to Frankfurt and Los Angeles to Tokyo Narita. In 2012, SIA had an average load factor of about 76% from New York to Frankfurt and an average load factor of about 82% from Los Angeles to Narita. Switching to the less dense A380 and terminating the non-stops should provide some opportunities to boost loads on these routes. There could be some negative impact on SIA’s ability to pick up passengers in Japan and Germany for the Narita-Singapore and Frankfurt-Singapore legs but SIA also operates turnaround flights in these markets to accommodate most of the local passengers. 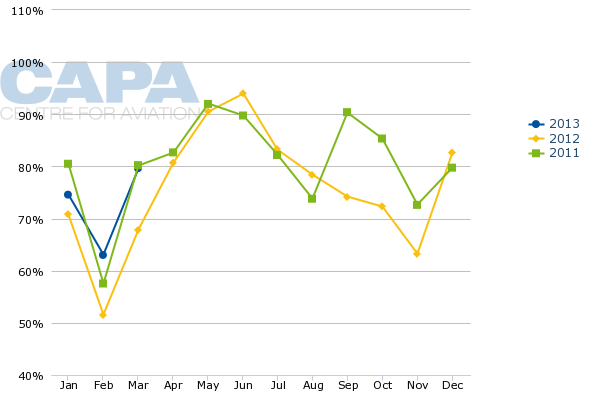 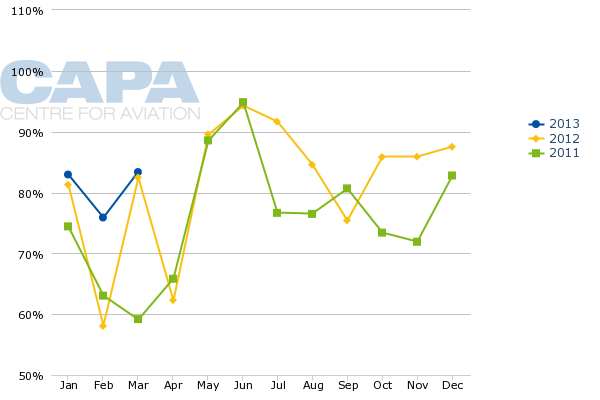 SIA market share in the US will take a hit

While switching to the 409-seat A380 is logical as it allows SIA to retain more premium passengers and improve economy load factors, it will result in a bigger slip in its total market share in the US. Assuming the anticipated switch to the 409-seat A380, SIA will only have 11,008 weekly one-way seats from the US starting in late Nov-2013. This represents a 16% drop compared to the current 13,076 weekly one-way seats.

Note: Assumes switch from 471-seat A380 to 409-seat A380 on New York JFK and Los Angeles one-stop services
Source: CAPA – Centre for Aviation

With 22,016 weekly return seats, SIA would only be the ninth largest Asian carrier in the US market. Currently four Asian carriers have between 22,600 and 25,200 weekly seats to and from the US – Asiana, EVA Air, Air China and China Airlines.

SIA’s upcoming changes in the US market follow another round of reductions several years ago, when SIA dropped services to Chicago via Amsterdam and Las Vegas via Hong Kong. SIA also previously served Newark one-stop via Amsterdam and offered a second one-stop option from Los Angeles via Taipei.

A few years later, in 2009, SIA also cut Vancouver, its only Canadian destination which was served via Seoul. Houston was added in 2008 but this new service did not come close to offsetting all the cuts to the carrier’s North American network.

SIA could potentially re-visit US expansion after launching its proposed joint venture carrier in India with Tata. A one-stop product to the eastern US via India would not be longer than its current one-stop flights via Europe. The US is a large market for India which the new carrier will likely seek to serve at some point.

For now, SIA will go with a smaller operation to the US as the potential for new US routes via India is more a long-term option. While dropping the glamorous non-stop services represent a dent in SIA’s armour, the group is better off focusing on other markets.

Maintaining a reduced presence in North America with 33 weekly flights should be sufficient to keep SIA on the radar screen while improving profitability. Geography has never been on SIA’s side for competing in the US market and the expensive nearly decade-long experiment with ultra long-range flights only proved how disadvantaged SIA is in this regards compared to its North Asian peers. SIA is best off focusing on expansion in markets closer to home.