Singapore Airlines (SIA) has reported higher profits for the three months and fiscal first half ending 30-Sep-2013. But the carrier’s operating margin was once again low, particularly by SIA standards, as it continues to see a drop in yields.

Market conditions for SIA remain unfavourable. Competition in Southeast Asia has been intensifying while the cargo and long-haul passenger markets remain relatively weak. But the group has been trying to position itself for higher growth and profitability over the long term through a series of major strategic changes.

The last of several major strategic initiatives came towards the end of the most recent quarter as SIA unveiled plans to launch a joint venture full-service carrier in India with Tata. The new Indian carrier, which is expected to launch in 2014, follows the 2012 launch of Singapore-based long-haul low-cost carrier Scoot and an acceleration of expansion at regional full-service subsidiary SilkAir. Scoot is not yet profitable and SilkAir has seen its profitability decline in recent months but over the long-run the SIA Group will have a stronger portfolio with a potential for a return of higher profits.

SIA’s passenger yields have now dropped on a year-over-year basis for seven consecutive quarters, a discouraging sign for a carrier that has traditionally relied heavily on its premium positioning.

SIA senior vice president for finance Chan Hon Chu explained during the 13-Nov-2013 media and analyst results briefing that “it remains a challenge in trying to lift yields as the sluggish global economy continues to dampen business sentiment. Leisure and business travel continues to be price sensitive.”

He also pointed out that the stronger Singapore dollar has impacted yields and accounted for half of the 3.5% yield decline in 2QFY2014.

On a year-over-year basis yields have been down every month so far this fiscal year. Yields in recent months are only about SGD1 cent higher than their low point in FY2010, the year SIA was most impacted by the global financial crisis. “The operating environment today is even more challenging than 2009/10, when we were affected by the global financial crisis,” Mr Chan said.

Despite the lower yields, SIA mainline was still able to record a 16% improvement in operating profit to SGD97 million (USD78 million). But the carrier’s operating margin remained a relatively low 3% for the quarter and 2.9% for the fiscal first half. 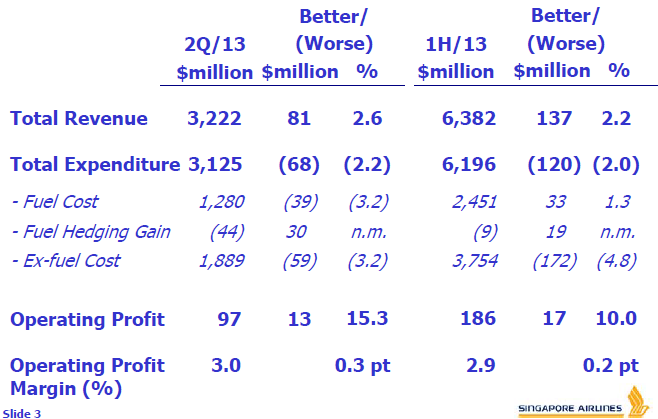 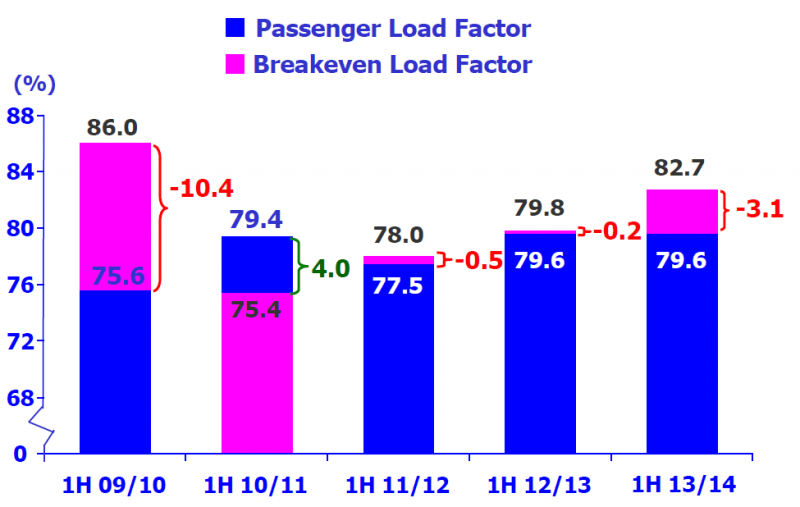 Market conditions are challenging for SIA

The continuing trend of declining yields and rising break-even load factors is a reflection of the tough market conditions confronting SIA. Gulf carriers have pursued aggressive expansion in Southeast Asia in recent years, targeting both the premium and leisure end of the Southeast Asia-Europe market.

SIA is the largest Southeast Asian carrier in Europe but also has seen competition from its peers in the region intensify in the Southeast Asia-Europe market with the introduction of A380s at Malaysia Airlines and Thai Airways. Philippine Airlines also has just re-entered the European market while Garuda Indonesia is planning to become in early 2014 the sixth Southeast Asian carrier operating non-stop flights to Europe. The additional capacity and increasing competition comes as demand in Europe remains relatively weak.

In its results announcement for 2QFY2014 SIA warned: “The operating landscape for the airline industry remains challenging amid continued global economic uncertainty. Advance bookings for the coming months are projected to be higher compared to the same period last year on the back of efforts to boost loads. However, ongoing promotional activities necessitated by intense competition and a strong Singapore dollar are expected to place pressure on yields.”

SIA Group CEO Goh Choon Phong reiterated this warning during the analyst briefing, saying: “We expect to have continued pressure on our yields as competitions heat up and as the economy is somewhat sluggish.”

SIA also has been impacted by the weak cargo market. SIA expects cargo demand “to remain flat due to weak international trade volumes and excess capacity in the market. Cargo yields are therefore likely to remain under pressure.”

The SIA Group this year has been allocating nearly all of its additional capacity to routes connecting Singapore with other Asia-Pacific markets, in particular Indonesia and Australia. There has also been capacity growth in the key Indian and Chinese markets.

The growth within Asia has come from all three of the group's brands – SIA mainline, SilkAir and Scoot. But while the demand environment in the short/medium-haul passenger market within Asia-Pacific is much more favourable compared to the long-haul passenger or cargo market, competition is also intensifying. Southeast Asia’s low-cost carriers have placed into service nearly 100 additional aircraft in 2013 while most of the region’s main full-service airlines have followed similar strategies to SIA in pursuing short-haul expansion using primarily their narrowbody fleets.

The increased competition regionally has impacted SilkAir as the carrier has been unable to grow passenger traffic as fast as capacity. ASKs at SilkAir were up 12.3% in 2QFY2014 while RPKs were up only 6.9%. As a result the carrier’s load factor slipped 3.5ppts to only 69%.

SIA is not yet providing financial or traffic figures for Scoot. But the subsidiary, which launched services in Jun-2012 and currently operates six 777s, remains unprofitable and is unlikely to start contributing to the group until after it transitions its fleet to more efficient 787s in FY2015.

From a load factor standpoint, Scoot has been successful, with average load factors exceeding 80% almost every month the carrier has been operating. But fares have been very low and with frequent promotions often below cost.

Mr Goh told analysts that Scoot’s performance so far has been in line with initial expectations and the carrier will continue pursuing expansion. He also said Scoot will be discussing further cooperation with SIA short-haul LCC affiliate Tigerair and the group is looking at whether the two carriers will potentially need to seek anti-trust approval. Scoot and Tigerair already interline and offer a connection product in Singapore that includes through check-in.

With the Tata JV, SIA needs to be patient

The SIA Group will also need to initially be patient with its planned joint venture carrier in India as it will take time for the start-up to launch, spool up and start making positive contributions, particularly given the historically challenging market conditions in India. But the investment is strategically important as it will help build the group’s position in India, a key market which SIA and SilkAir currently serve with 107 weekly flights to 11 destinations.

As in the case with Scoot, the SIA Group is prepared – and has the cash – to wait years if necessary for a return on its investment in India. As CAPA reported in Sep-2013:

Close involvement and equity in a new airline in India follows the acquisition of a 19.9% stake in partner Virgin Australia. Australia, India and China are SIA’s key markets and of strategic interest to the group as it increases focus on the fast-growing Asia-Pacific region. A partnership with and potential investment in a Chinese carrier is the only remaining missing major piece of the puzzle SIA has been working on since Goh Choon Phong took over as CEO at the beginning of 2011.

Mr Goh’s bold new strategy also includes investments in the budget end of the market, again with a focus on the Asia-Pacific region which comes as SIA tries to reduce its reliance on the long-haul passenger and cargo markets. SIA has recognised the opportunities in faster growing budget end with the launch of Scoot and increased involvement in Tigerair but also wants to maintain its leading position at the top end of the market, with continued investment in the SIA premium product and now a new full-service airline in India...

The new SIA Group strategy is now mostly written but could have one or even two more pieces before it is deemed complete. It is not about the short-term. Over the next few years SIA’s profits will continue to be under pressure as competition in its main markets and in the premium sector, which remains its bread and butter, is intense. Market conditions in cargo and Europe, two important revenue generators, also remain unfavourable.

But SIA has the patience and the cash to wait for its long-term strategic moves to bear fruit. In India, SIA will certainly need patience. A long list of regulatory approvals will be required for the new JV and in India no one can ever predict how long this will take nor can it be assumed that anything is a done deal. The regulatory and policy uncertainty in India has been one of the greatest impediments to the entry of serious players.

If launched, the new carrier will have to compete in a challenging market where profits have so far proven to be elusive. The fundamentals of the Indian market should eventually improve but patience and initial losses may have to be withstood. The five-year rule requirement to operate domestic services, if it remains in place, will particularly limit opportunities and make profitability difficult in the initial years. But a strong, well-capitalised carrier with the support of an airline partner with proven credentials will be very positive for Indian aviation.

SIA and Tata in late Oct-2013 received verbal approval from India’s Foreign Investment Promotion Board (FIPB). SIA, which will have a 49% stake in the new carrier, says that once it secures FIBP written approval it will proceed with other layers of approval which are required for the airline to commence operations.

The new carrier is targeting a mid-2014 launch. Mr Goh said the board of the new carrier, which will be managed completely independently from SIA, will decide on a fleet plan.

“By no means do we think this is going to be a walk in the park. The venture setting up in India will have its challenges,” Mr Goh told analysts. “It’s a very competitive market domestically. As a new start-up the current rule states that one has to operate five years and to reach a fleet of 20 aircraft before you are allowed to go overseas. We all know how competitive the domestic market is. Therefore it is going to be a highly challenging venture to actually make it work. But we believe that we have the best partner we can find ... and we believe we also have the right environment with India liberalisation taking place to actually enter this market.”

Short-term challenges are large but not insurmountable

For the short term the challenges confronting SIA will remain and could even grow in size as competition further intensifies. 2QFY2014 marked the second straight quarter of operating profit improvements for the group, ending a string in which it saw its operating profit drop in nine out of 10 quarters. But the profit improvement for 1HFY2014 was modest and comes off a relatively weak base.

SIA will almost certainly post another profit for the full fiscal year, continuing its remarkable string of profitability which began when the company was established over 40 years ago. But its margins are not nearly as high as they used to be and the competitive landscape has changed dramatically, providing some of the biggest challenges in the group’s history. SIA has now adjusted but it will be a few years before the jury is out on whether the adjustments are sufficient to usher in a new era of higher profitability. 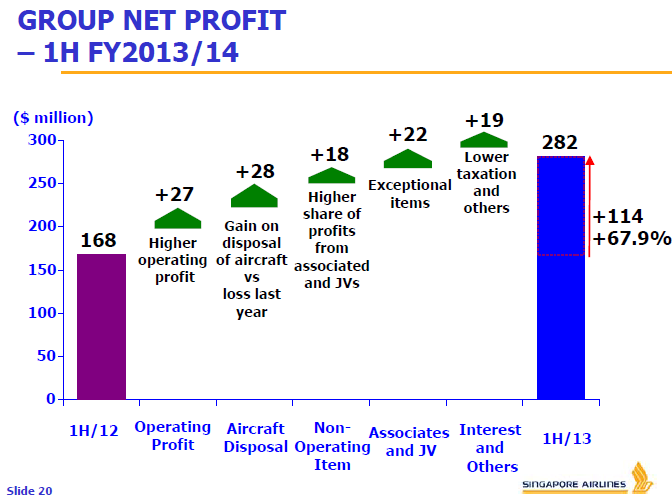