bmi regional’s plans to enter the Norwegian domestic market, together with its recently commenced contract flying for Flyglinjen in the Swedish domestic market, highlight its ability to find new regional niches. Seven of its top 10 international routes are monopolies and it has announced 11 new routes in just over a year since its sale by IAG to Sector Aviation Holdings in Jun-2012.

bmi regional’s target is to be profitable in its second full year of operations and its chairman said in Jun-2013 that it was fast approaching a cash neutral position. Not surprisingly, this implies that it is loss-making, and that it will benefit from a focus on unit costs: CASK is king in the airline sector. Once it does start to generate cash, it may consider its fleet replacement options. Not only is the fleet ageing, but also the size of its Embraer jets (50 seats and fewer) are a challenge in matching the unit costs of competitors.

bmi regional goes back to its roots

Formerly the regional arm of British Midland, bmi regional has been privately owned since Jun-2012 by Sector Aviation Holdings Ltd. After British Midland was sold to Lufthansa and then to IAG, the mainline business of BMI was incorporated into British Airways, but IAG had no interest in retaining the regional business or the no-frills brand bmibaby (which was closed by IAG).

The sale to Sector Aviation represents something of a return to its roots as new bmi regional chairman Ian Woodley and director of product and sales Graeme Ross were involved in founding its predecessor Business Air, which was sold to British Midland in 1996.

A predominantly international carrier (71% of weekly seats, source: Innovata for the week of 9-Sep-2013), its domestic capacity accounts for less than one third of its seats. 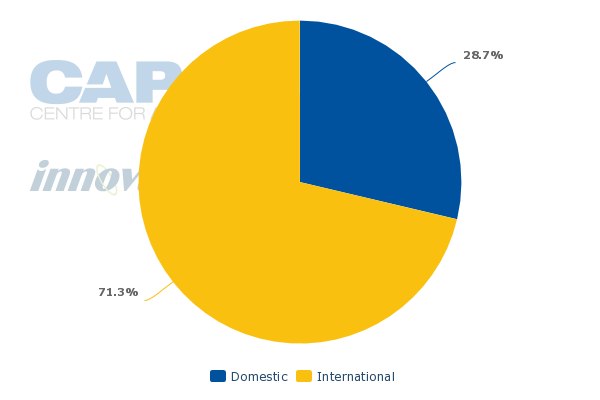 The carrier operates to eight UK destinations and 16 in Western Europe, with flight times of around one hour to two and a half hours. These short flights reflect the regional focus indicated by its name. It has launched 11 new routes since bmi became independent in 2012, most recently Kristiansund (Norway) to Aberdeen on 28-Aug-2013 (it is the only scheduled operator on this route between two major oil cities).

Mr Woodley told Bloomberg in Jun-2013: “we are going into key regional commercial and industrial centres”.

In Mar-2013, it commenced its first route that both originates and terminates outside the UK with the launch of Bremen (Germany) to Toulouse (France). The carrier will develop its European business further in Jan-2014, when it enters the domestic Norwegian market by operating from Stavanger to Harstad and Tromsø. Ian Woodley said, "The launch of these domestic Norwegian routes is part of bmi regional's strategy of expanding into markets with compelling growth possibilities for our business model. We identified the Nordic region and, in particular, the oil and gas industry as one of the best opportunities… These routes not only meet our strategic goals, but are a perfect example of the flexibility of our airline to move fast when opportunities arrive."

The Nordic region is growing in importance to bmi regional, which operated its first charter service to the Faroe Islands on 07-Aug-2013 using Embraer E145 equipment. It also operates the Swedish domestic route Kristianstad to Stockholm Arlanda on behalf of Swedish regional carrier Flyglinjen, using its own AOC and crew, and is seeking similar contract flying relationships with other airlines. In addition, the airline is reportedly discussing potentially launching a scheduled Aberdeen-Vágar service. 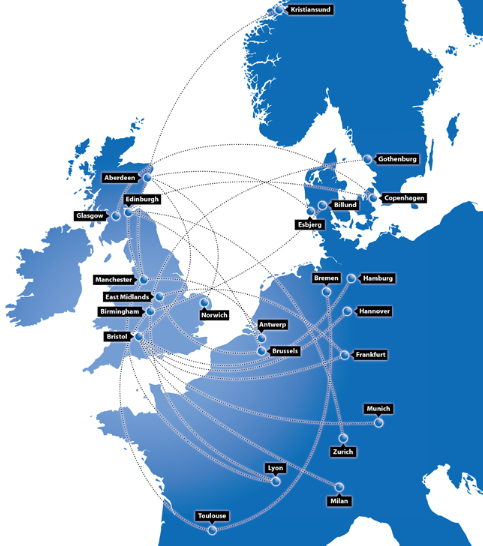 Although bmi regional has developed its network considerably since becoming independent, the distribution of its international seat capacity still bears the marks of its past life as a Lufhansa-owned Star Alliance feeder. Germany, Denmark and Belgium, all home to important Star hubs, are its top three countries outside the UK, ranked by seats. The short-haul regional characteristics of the network are also evident in the northern and western European focus of the countries that it serves. The only southern European country on the list, Italy, is only served through the northern city of Milan. 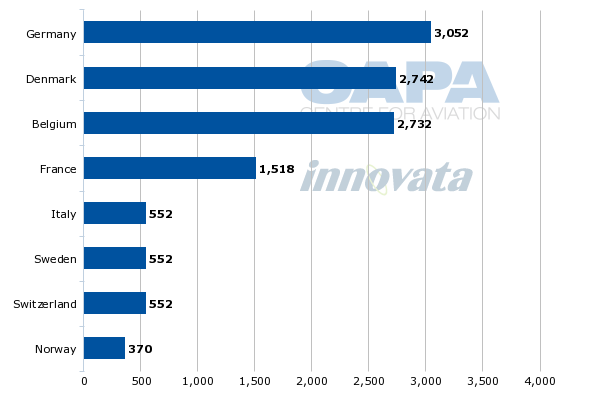 Sector Aviation Holdings has its headquarters in Aberdeen and East Midlands Airport, but only Aberdeen features in bmi regional’s top 10 bases. Its biggest base by seat capacity is Bristol, but it also has virtually the same number of seats at Aberdeen, Edinburgh and Manchester (source: Innovata, week of 9-Sep-2013). Its other four UK bases are Birmingham, Norwich, Glasgow and East Midlands. 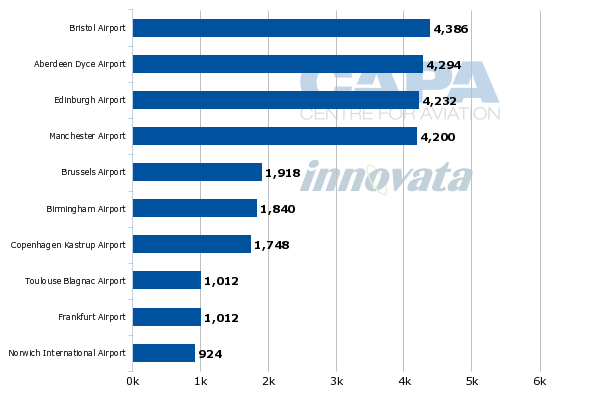 bmi regional is the fourth largest airline by seats at Bristol, its biggest base, with a share of around 3% (source: Innovata, week of 9-Sep-2013). The leader is easyJet, with 57%, followed by Ryanair’s 29%. 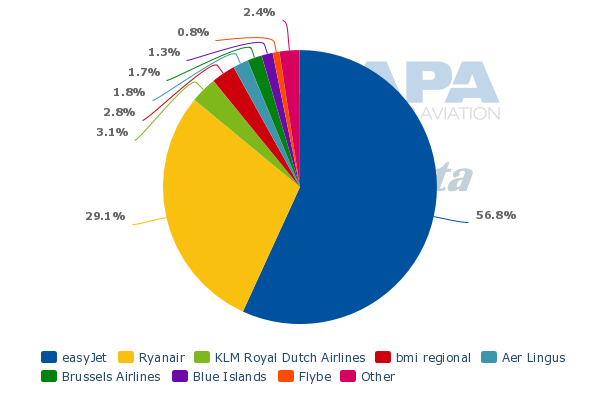 At Aberdeen Dyce Airport, bmi is outside the top nine airlines by seat capacity, but is number three by aircraft movements. At Edinburgh, Manchester, Birmingham and Glasgow, its share of both seats and movements is too low to appear in CAPA/Innovata analysis of the leading carriers. At Norwich, bmi regional’s sixth largest UK base, it is the number two carrier by aircraft movements and number four by seats. At Nottingham East Midlands, bmi regional is the seventh largest carrier by seats, with a share of less than 1%. 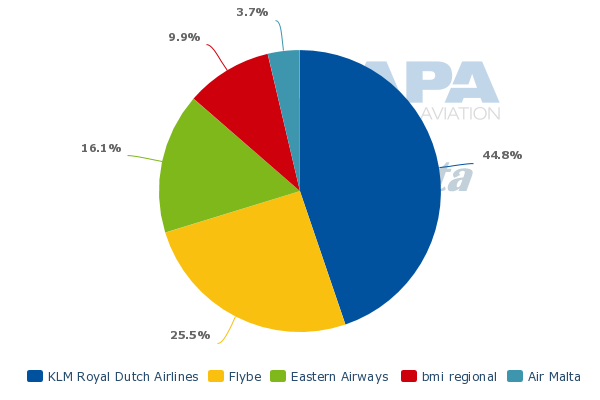 The UK is one of the highest penetrated European countries by low-cost carriers, so it is no surprise that a LCC is the number one airline at each of bmi’s UK bases, with the exception of Aberdeen (where British Airways is the leading carrier) and Norwich (KLM). However, while bmi has a low market share at all of its UK airports, where LCCs have a strong position, it has some strong market positions on the routes that it flies.

bmi regional operates only four domestic routes, three of which involve the oil industry city of Aberdeen in north west Scotland, and two of which involve Manchester (see chart below). All four connect a city in Scotland with one in England and avoid the London airport system. It is the monopoly operator on Aberdeen to Bristol, but faces competition from Flybe on two routes and Eastern Airways on one. On all three competitive routes, bmi regional is the number two carrier. 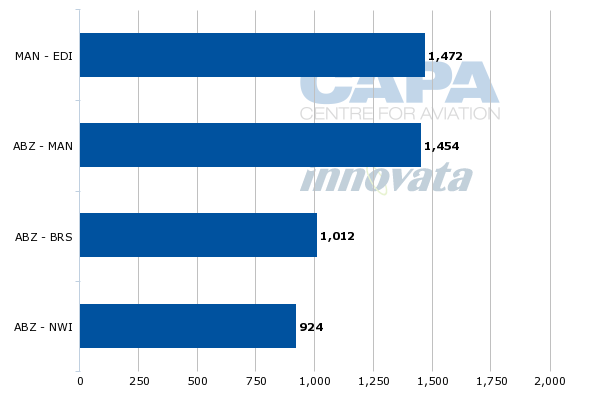 Top 10 international routes include seven monopolies; LCC competition on the others

Its list of top 10 international routes shows it to have a stronger position than on domestic routes. It is the monopoly supplier on seven of the routes, if judged on a city pair basis, or eight on an airport pair basis (it is the only airline on Bristol to Milan Malpensa, but Ryanair operates Bristol to Milan Bergamo). On Edinburgh to Copenhagen and Edinburgh to Brussels, it is the number three carrier (number two to Brussels Airport, but Ryanair has more capacity on Edinburgh to Brussels Charleroi South).

On the routes where there is competition, it comes in the form of Europe’s two leading LCCs, Ryanair and easyJet, although its focus on the primary airports in Milan and Brussels gives it a competitive edge over Ryanair in the market for business passengers. The economics of regional jets with 50 seats (or fewer) otherwise act as a competitive disadvantage compared with the much larger jets of the leading LCCs. 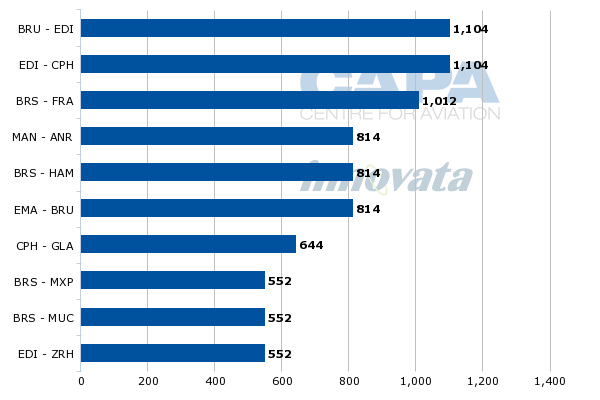 The frequency versus aircraft size equation

Small regional jets may bring seat cost disadvantages compared with larger aircraft, but the impact of this may be offset by a high frequency service, which is an attractive product feature that can help to generate a premium from business travellers. On domestic routes, however, bmi has fewer frequencies than its competitors and operates less economical equipment.

bmi regional offers 16 weekly flights on Manchester to Edinburgh and Aberdeen, while Flybe offers 23 and 30 frequencies respectively. All other things being equal, this gives a competitive edge to Flybe in attracting business passengers, leaving bmi to rely more on fares. However, bmi’s 50 seat Embraer jets on these routes would appear to be less economical than Flybe’s 78 seat Dash-8 turboprops. On Aberdeen to Norwich, bmi has 12 weekly frequencies with a mix of 37 and 50 seat jets, compared with Eastern Airways’ 15 frequencies using 58 seat Saab 2000s. 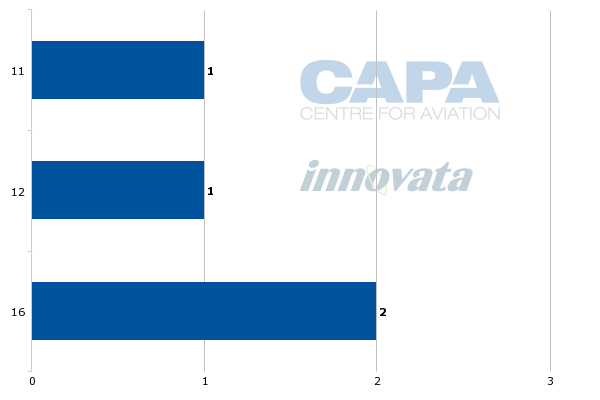 However, the competitors’ equipment offer better per seat economics, giving them an advantage in under-cutting bmi on price. bmi’s imminent withdrawal from the Birmingham to Lyon route, were it operates three times weekly with the 50 seater EMB-145 against Flybe’s six times weekly using 88 seater EMB-175 equipment, underlines the importance of having either superior frequencies or more economical aircraft than the competition. 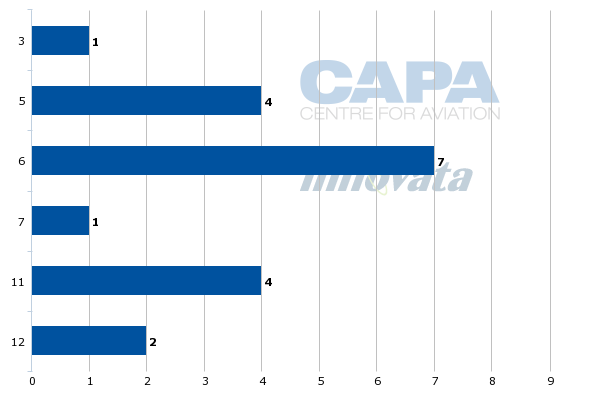 bmi regional is the number 32 airline in the UK, although its ranking in the domestic market is a more respectable number nine.

Among carriers classified in the CAPA/Innovata database as regional/commuter airlines, it is the biggest airline in the UK and the two other leading players in this category are Guernsey-based Aurigny Air Services, which has no route overlap with bmi, and Eastern Airways.

* indicates a foreign carrier **indexed to 100 for bmi regional
Source: CAPA - Centre for Aviation and Innovata

Eastern Airways competes with bmi only on Aberdeen to Norwich, but it is present in three of its UK bases (Aberdeen, Norwich and Nottingham East Midlands). Eastern also operates from Stavanger, bmi’s new Norwegian domestic base, to Aberdeen (and to Newcastle). While bmi does not currently fly between Stavanger and Aberdeen, any plans to add to the routes it offers between Scotland and its Norwegian network could increase the level of competition with Eastern Airways.

While Flybe is not categorised in this group by the database, it is arguably also a regional airline and operates from all eight of bmi’s UK bases. Moreover, although much larger overall, Flybe overlaps with bmi regional on two domestic routes, Manchester to Edinburgh and Manchester to Aberdeen. The two also overlap on Birmingham to Lyon, although bmi will shortly withdraw from this route. In addition, Flybe connects bmi destinations Hannover and Milan with bmi’s base at Manchester and also connects Hannover with Birmingham. It is interesting to note that Flybe also has a contract flying business operating for a Nordic airline customer, Finnair.

bmi regional operates a fleet of 18 Embraer regional jets, comprising four 37 seat EMB-135 and 14 50 seat EMB-145. According to the CAPA Fleet Database, the average age of the fleet is 13.4 years. This compares with around six years for Flybe, 18 for Eastern Airways, and five for Ryanair and easyJet. According to the CAPA Fleet Database, all but one of the aircraft are leased.

On its website, bmi regional describes itself by saying: “We serve niche markets on domestic UK and European routes which are ideally suited to small jet operations”. It certainly seems to have found some niches, although not without competition, particularly within the UK domestic market. It has shown flexibility and adaptability by operating routes such as Bremen to Toulouse and the planned new Norwegian domestic routes and these qualities should help it to add to its niche routes, particularly on the European continent.

However, its fleet is getting older and will need modernising in not too many years from now.

Moreover, bmi’s small regional jets may compromise its ability to compete on price against operators of larger equipment on routes where it does not offer superior frequencies or some other reason for extracting a premium from passengers. At some time soon, this bullet will have to be bitten.