Flybe: not yet "Fit to Compete", but the exercise regime has started

Flybe reported wider losses for FY2013, its third successive year of deteriorating results. Moreover, cash flow weakened, net debt grew and net assets fell. In addition to the challenge of high fuel prices, Flybe has seen a 21% reduction in the UK domestic market since 2007 and its high proportion of domestic traffic has made it particularly exposed to increases in UK air passenger duty. Flybe’s unit costs leave it struggling to compete with LCCs, its load factors are below industry averages in spite of capacity cuts and its labour force is among the least productive in Europe.

In Jan-2013, Flybe announced a turnaround plan, dubbed "Fit to Compete" and updated in May-2013 and Jun-2013. This aims to improve profitability through cutting headcount and other cost efficiencies, to drive revenue enhancements, to generate cash without recourse to shareholders and to restructure the network into a defensible core. The disposal of Gatwick slots to easyJet and deferral of aircraft deliveries will help its cash position, but, while Flybe may no longer be gaining weight, full fitness remains a long way off.

Revenues were flat in FY2013

Flybe’s FY2013 group revenues were just below flat compared with the previous year, as a 2% fall in passenger revenues was offset by the launch of contract flying, which generated almost GBP13 million in revenues (FY2012: zero). Contract flying represents the provision of four crewed Q400 turboprops to Brussels Airlines in arrangements lasting up to two years and which expire in Apr-2014 and Oct-2014.

Costs were up almost 5%, mainly due to fuel; ex-fuel was only steady

Total labour costs, which accounted for 20% of costs, grew by more than 7%. Excluding restructuring costs, labour costs grew by less than 3%, in spite of a reduction in full time equivalents of 4%. This meant that employee costs per employee increased by 7%. This was partly offset by a modest increase in ATK per employee, but total employee costs per ATK were up by 5.7%. On the other side of the equation, revenues per employee increased by 4.1%, but Flybe’s labour productivity remains at the lower end of European airlines.

Flybe’s turnaround plan sees a 21% reduction in UK staff numbers, based on its Feb-2013 headcount of 2,730. Of the total of 580 staff leaving the company, 330 are to be through redundancy (voluntary and compulsory) and 250 through outsourcing deals.

Activities to be outsourced include call centres, on-board sales, a large portion of line maintenance and ground handling. In addition, automated check-in is being introduced. Flybe has also reached agreement in principle with the pilot union BALPA for a salary cut of up to 5% in return for extra time off. These actions should lead to improvements in Flybe’s labour productivity measures, but the company also needs to increase its load factors.

The plan also involves liquidity improvements through the sale of slots at Gatwick to easyJet for GBP20 million, the deferral of 16 Embraer E175 deliveries (saving GBP20 million of pre-delivery payments in winter 2013/2014) and the sale of other minor assets (Flybe hopes to raise around GBP5 million).

Flybe UK was responsible for the bulk of the losses

Flybe has two divisions: Flybe UK, which is the core UK passenger airline and Flybe Outsourcing Solutions, which contains maintenance and training business in addition to Flybe’s contract flying businesses and Flybe Finland, its 60% owned joint venture with Finnair.

Flybe Finland is equity accounted, which means that its revenues and costs are not consolidated into the group operating result, but Flybe takes its 60% share of the joint venture’s profit or loss into the group’s pre-tax result.

Both divisions made a pre-tax loss before restructuring and surplus capacity costs, with Flybe UK responsible for the larger part (GBP17 million) of this loss. Flybe Outsourcing Solutions' adjusted pre-tax loss of GBP2.3 million was due to the group’s GBP2.8 million share of the Flybe Finland loss. The other businesses in this division made a small profit. 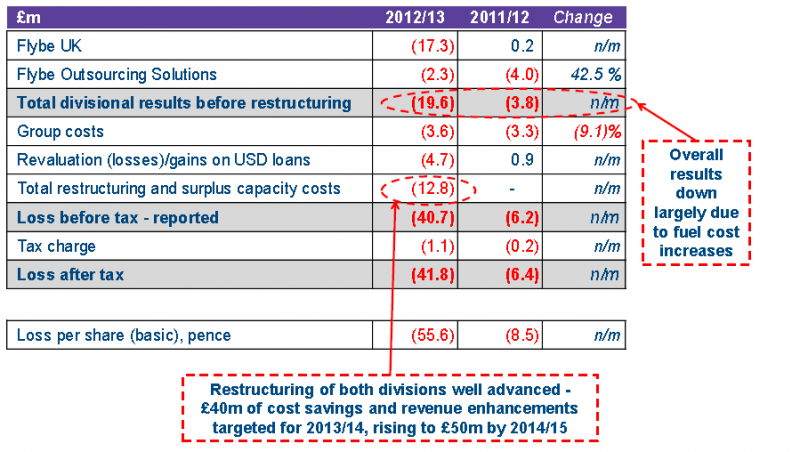 Flybe UK saw passenger numbers fall by 1.1% after seat capacity was cut by 2.7%. Load factor gained 1.0 ppt to reach 64.1%. This remains a weak level compared with the 81.3% average load factor recorded by all UK airlines in the calendar year 2012, although regional airlines tend to have lower than average load factors. According to Flybe Chairman and CEO Jim French, easyJet’s load factor in its UK regional operations (i.e. excluding its London routes) is in the mid 70s (compared with 87% for easyJet overall) and he believes this should also be achievable by Flybe. 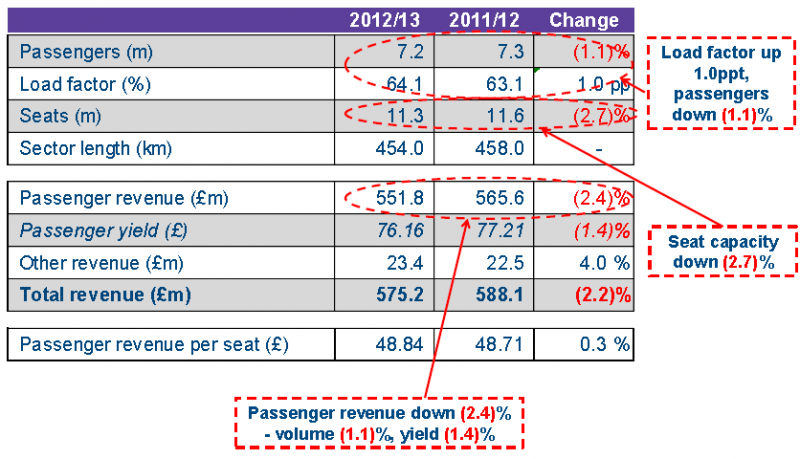 The majority of Flybe Finland’s business is contract flying for Finnair, an activity which saw revenue growth of more than 200% in FY2013, with passenger numbers of 1.6 million (0.5 million in FY2012). In its own risk commercial flying activity, it saw 41% growth in passenger numbers in FY2013, with a load factor of 41.8% (up from 40.4% in the previous year). Growth rates are distorted by the fact that Flybe Finland did not operate for a full year in FY2012. Flybe says that “contract flying is expected to dominate this business in 2013/14 onwards and will provide a stable platform for future profit and cash generation”.

In spite of the poor load factors in commercial flying, Mr French says that there are “no immediate plans” to close the business, although it is being “continuously watched”.

Flybe Finland's revenues were up sharply

A track record of losses and low load factors

Flybe’s track record of profitability has been weak in recent years, with only one year (FY2010) of positive results at the pre-tax level in the past five. Losses have widened each year since 2010.

Passenger numbers in Flybe UK have been more or less flat since FY2009 at a little more than seven million. Scheduled load factor for all passengers under management has fallen by almost 3ppt since FY2009, although it has gained almost 1ppt over the past two years.

Flybe’s biggest base is Southampton, where is has a 96% share of seats (source: Innovata, week of 24-Jun-2013). It is the number one carrier at seven of its top 10 airports (Southampton, Birmingham, Belfast City, Glasgow, Jersey, Exeter and Isle of Man). Of the remaining three, it is to withdraw from London Gatwick in Mar-2014 after agreeing to sell its slots to easyJet. It is the number four carrier at Manchester and Edinburgh. 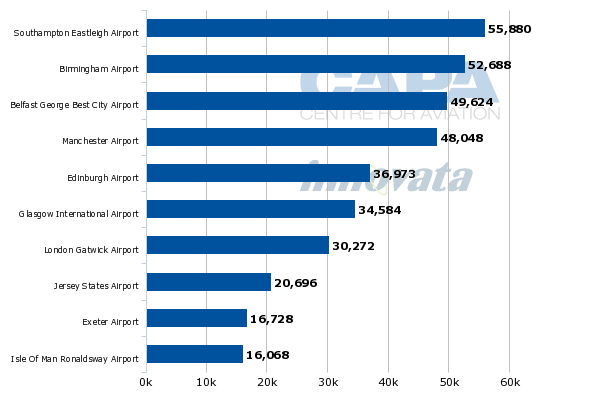 Strong market positions on many of its biggest routes

The majority of Flybe’s capacity is domestic, with only 42% of seats on international routes (source: Innovata, week of 24-Jun-2013). Virtually of the international capacity is to Western Europe. Flybe has a strong market position on its top 10 domestic routes, being the number one carrier by seat share on all of them and the sole carrier on eight of them. 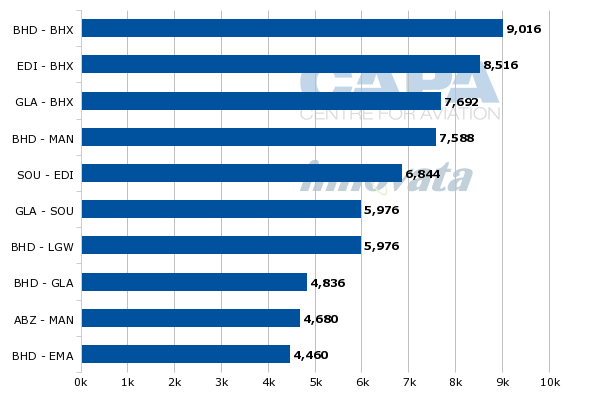 Flybe is the number one carrier on six and number two on four of its top 10 ‘international’ routes, but is the monopoly carrier on only two of these (Isle of Man to Manchester and Southampton to Dublin). 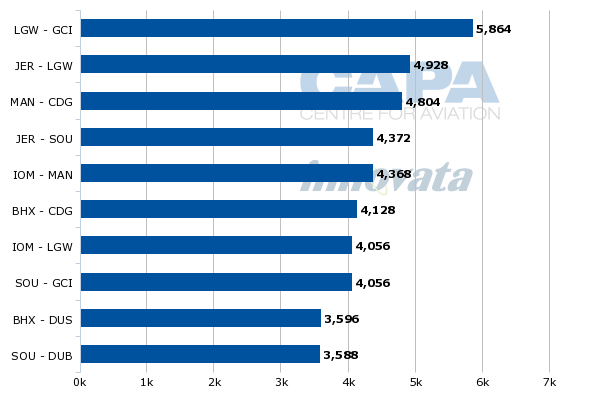 The Embraer order is part of a policy to rebalance the UK fleet with a more even distribution of regional jets and turboprops. Four Bombardier Q400 aircraft are being operated for Brussels Airlines on a contact flying basis, of which two will return to Flybe in Apr-2014 and the other two in Oct-2014. Two Q400s were sold to Aero Nigeria in May-2013 and Flybe is looking to sell a further two Q400s. The group fleet had 96 aircraft at 14-Jun-2013. 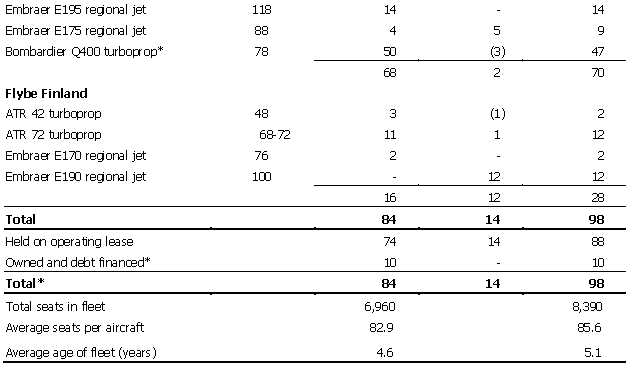 Compared with the growth in the Flybe UK fleet planned in Jul-2010, management has made significant cuts in order to better match supply to demand. Rather than the originally planned fleet of more than 80 aircraft at the end of FY2014, Flybe UK now expects to have fewer than 70. 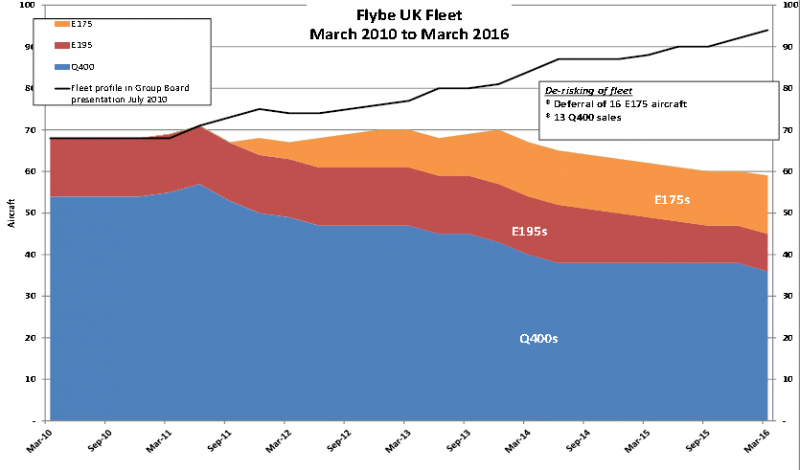 Flybe has a unit cost disadvantage relative to the LCCs that are increasingly important at many of the airports from which it operates. Its cost per ASK (CASK) is more than double that of Norwegian, the highest-CASK LCC, and more than four times that of Ryanair. Flybe has a shorter average sector length, but, even allowing for this, its CASK looks high compared with Europe’s LCCs (see chart below).

Flybe does have strong market positions on many of its most important routes, many of which are defensible given the limitations on operating the larger aircraft favoured by major LCCs at some of Flybe’s most important airports.

Flybe aims to rebalance its network to generate a higher proportion of leisure travel, because it currently receives more than 50% of revenues within 10 days of departure, making it vulnerable to short term market shocks. Sensibly its criteria for operating leisure routes are, first, that the market is not served and, second, that Flybe can operate its aircraft economically.

Nevertheless, to the extent that Flybe competes with LCCs for discretionary leisure spend, its relatively high cost base limits its ability to offer the attractive fares that often drive consumer decisions more than the destination offered.

Flybe sees its USPs as convenience and frequency, but a restructured cost base will probably be the key to its future competitiveness. In this respect, all eyes will be on the development of its earnings in FY2014. 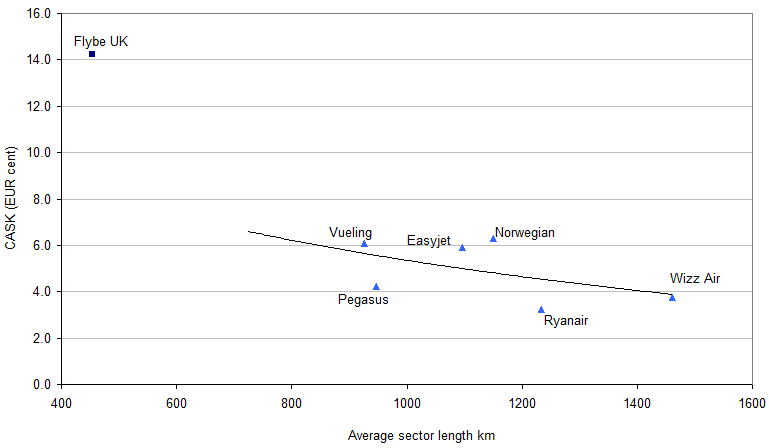