AirAsia Philippines' two new international routes launched on 19-Jul-2012 were notable in that the services were to Hong Kong and Macau, 20nm apart and previously considered too similar to warrant service to both. But regional Asian carriers, and LCCs especially, are increasingly finding they can support service to both cities. Also on 19-Jul-2012, Asiana LCC subsidiary Air Busan opened a route to Macau, complementing its Hong Kong service.

While Hong Kong and Macau may be geographically close, the division by the South China Sea dictates different catchment areas, with Hong Kong also serving Shenzhen in mainland China while Macau can serve the mainland's Zhuhai, whose airport is only for domestic flights. The regions are not equals, and only Thai AirAsia has more capacity into Macau than Hong Kong. But as Asia's population and economy continues to grow, the Pearl River Delta's airports will be Asia's equivalent to the London, New York City or Sao Paulo airport networks.

The 19-Jul-2012 launches from Air Busan and AirAsia Philippines brought to eight the number of LCCs serving both Macau and Hong Kong. The Jetstar Group is now the only major LCC serving Hong Kong but not Macau (excludes five smaller LCCs which currently only serve Hong Kong). Singapore-based Jetstar Asia dropped service to Macau in Feb-2012. 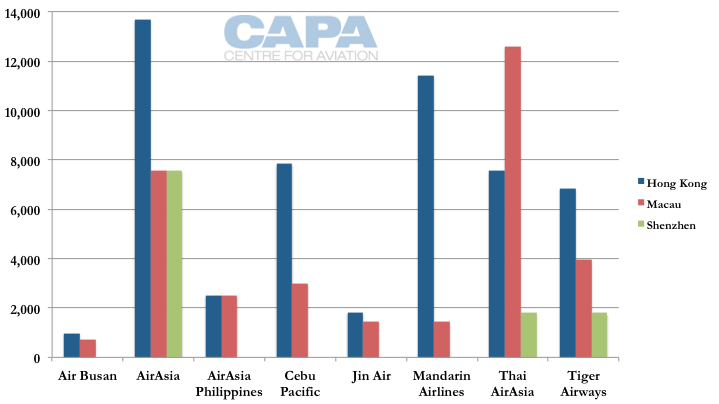 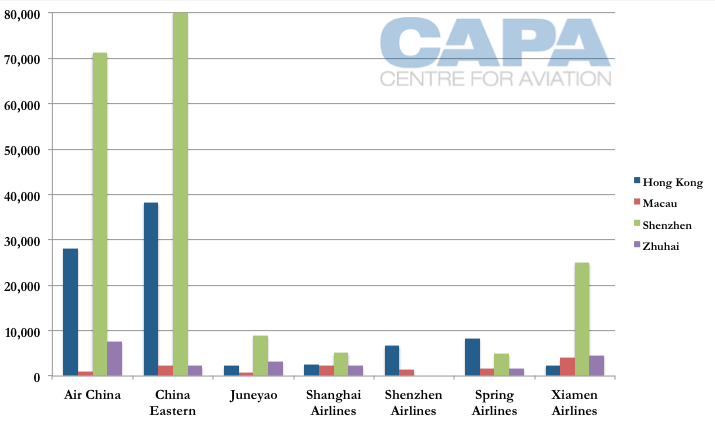 For international carriers, Hong Kong is the preferred port in the Pearl River Delta, with only Thai AirAsia deploying more capacity to Macau while AirAsia Philippines for now has equal capacity deployment to Hong Kong and Macau. As the carrier ramps up international expansion, Hong Kong is expected to see a greater share of services.

Air Busan and Jin Air, the low-cost arms of respective parents Asiana and Korean Air, have too little capacity deployment for meaningful comparison, but as a general rule their priorities take second place to the parent carrier and their growth is stunted. Of the three non-Chinese LCCs also serving Shenzhen, Thai AirAsia and Tiger Airways have a fraction of capacity to Shenzhen, but AirAsia deploys approximately the same amount of capacity to Shenzhen as Macau.

The situation is much different amongst Chinese carriers, where there can be little overlap. Air China serves Macau only from Wuhan while it links Hong Kong with Beijing, Chengdu, Chongqing, Dalian and Tianjin (but not Wuhan). Xiamen Airlines links Macau from Fuzhou, Hangzhou and Quanzhou but from Hong Kong only to Quanzhou and Xiamen, making Xiamen Airlines the sole Chinese carrier to have more capacity from Macau than Hong Kong.

Thai Smile and Air Macau are the only carriers that serve Macau but not Hong Kong. Thai Smile, which follows a hybrid regional/LCC model, launched services on 07-Jul-2012 and currently only serves one route – Bangkok-Macau.

The commencement of services to Macau from Air Busan on 19-Jul-2012 and Thai Smile on 07-Jul-2012 capped a theme of full service carriers using LCC or low-fare affiliates to serve Macau, which is heavily a leisure destination compared to Hong Kong. Thai Smile is a unit of Thai Airways and uses the TG code as well as Thai Airways' Air Operator's Certificate (AOC). "Thai had wanted to come to Macau for a long time," said Thai Airways executive vice president commercial Pandit Chanapai, speaking to CAPA during Thai Smile's launch event in Macau.

See related article: Thai Airways unit Thai Smile seeks to prove itself as a new type of carrier for Asia 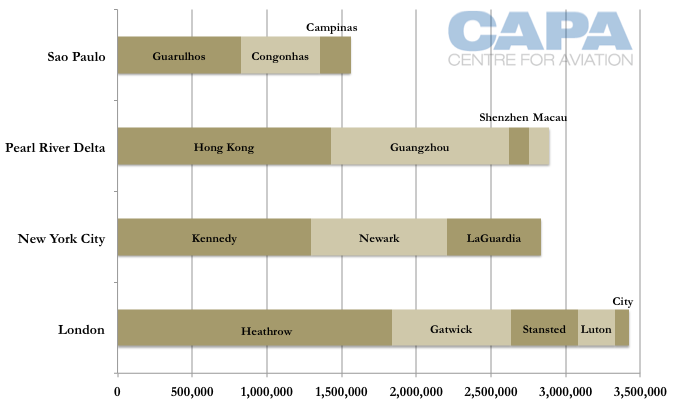 New York City, however, still has a lead over the Pearl River Delta airports when evaluating available seat kilometres. The Delta, with 6% fewer ASKs than New York City, is projected to overtake the New York City area in terms of ASKs around 2015. 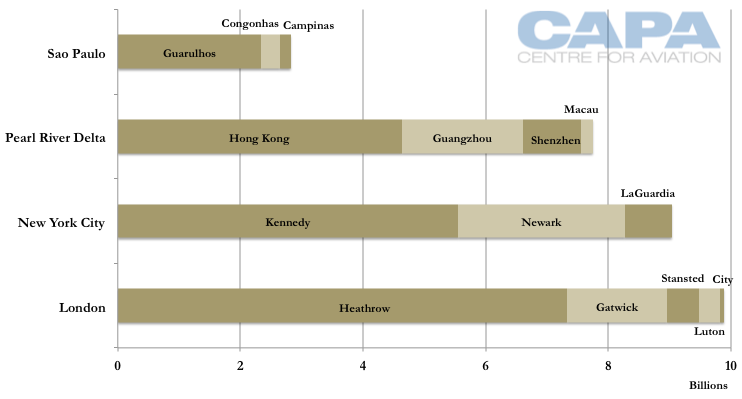 With large growth ahead, airlines can support service to multiple PRD airports

Hong Kong has approved construction of a third runway and is now planning a new terminal while Guangzhou is about to begin construction of its third runway. Guangzhou is already mainland China's third largest (18th globally) and slightly behind Shanghai Pudong. Shenzhen opened a second runway last year, leaving Macau and Zhuhai as the only one runway airports in the region. All this growth potential, including growing interest in Shenzhen and Macau makes this compact region – home to over a million people and some of the highest GDP output from the region – worthy of service from airlines to multiple airports.