AirAsia, the Asia Pacific region’s largest LCC, has proven its staying power in a slow but recovering market in 2Q2010, turning in what it describes as a "record quarter" for second quarter revenues. The carrier commented that the result builds on the “momentum of its first quarter profits” and sets the stage for a “potentially dynamic” second half.

AirAsia EBITDAR margin and profit after tax margin in 2Q2010 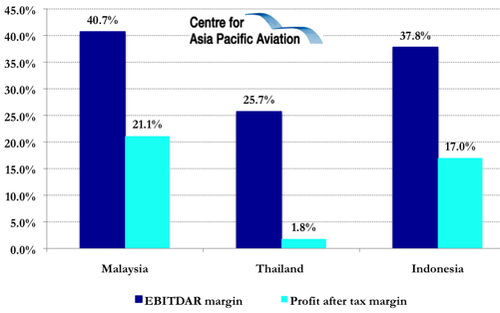 The group sets out its three operations separately (the Malaysia based airline; the joint venture Thai AirAsia and the Indonesia AirAsia JV).

AirAsia CEO, Tony Fernandes, upon the release of the results, commented: " Forward bookings are looking very good”, continuing: “The fourth quarter, of course, is traditionally our strongest quarter. To head into our strongest season on the back of a soaring first quarter and a record-breaking second quarter puts us in a fantastic position”. 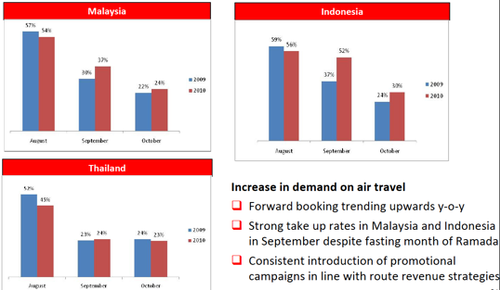 The carrier added that, based on the current booking trend, “underlying passenger demand in the third and fourth quarters for the Malaysian, Thai and Indonesian operations remains positive”, adding that Jul-2010 load factors are inline with 2009 levels and there have been “significant improvements in yield”. The carrier continued: "Barring any unforeseen circumstances, the directors remain positive with the prospects of the group for the second half of 2010".

The result and positive outlook contrasts with Malaysia Airlines' net loss of USD169 million in the same period, due to higher fuel costs and fuel hedging losses. 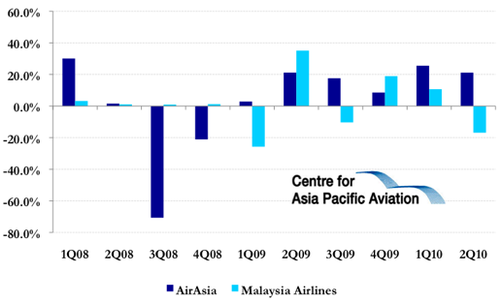 AirAsia shares have risen by 24% since the start of the year, almost in line with Tiger Airways' 26.5% rise and outperforming the Malaysian benchmark's KLSE 8.3% increase. On a day to day basis, the carrier’s shares were down 1.8% ahead of the result. 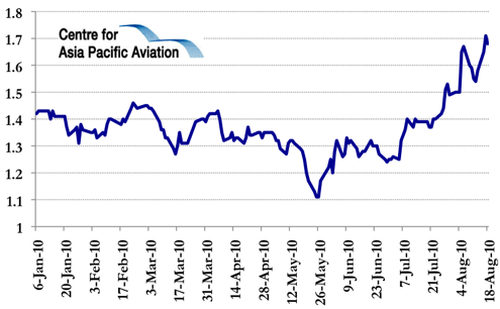 AirAsia’s core strengths remain the hallmarks of LCC success the world over – low costs and a revenue-generating model built on an expanding network and the sale of ancillary items.

Double-digit passenger growth trend maintained: During the quarter, AirAsia Group handled a combined 6.1 million passengers (a 13% year-on-year increase), with 3.9 million passengers on the Malaysia operations, 1.3 million for Thai AirAsia and slightly under 950,000 for Indonesia. The carrier has handled over 96.2 million passengers from the three operations since its inception. Load factors also improved across the board in the second quarter. 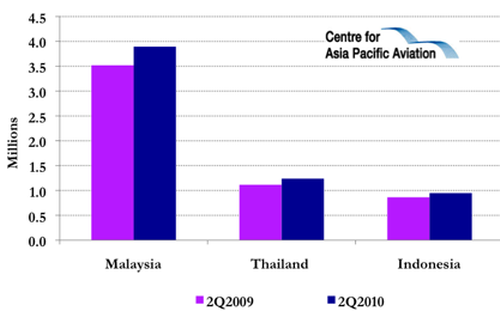 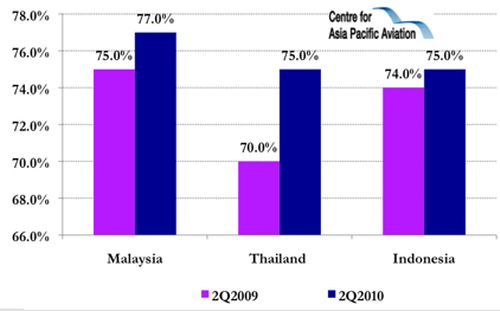 "A gushing revenue stream" of ancillaries: The importance of ancillary income to AirAsia’s business strategy is, meanwhile, growing rapidly, with the strong increases helping compensate for fuel price increases, with the carrier adding that baggage fees and AirAsia Cargo are the key contributors to ancillary income. 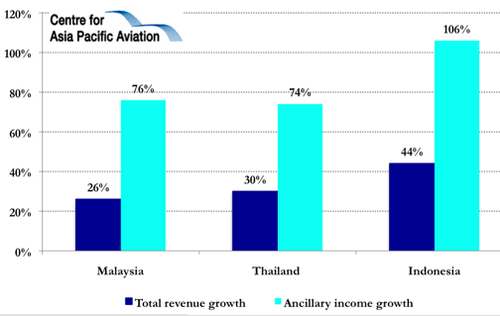 Mr Fernandes commented: “We have actually reached our target of RM 40 spending per passenger that we set for ourselves last quarter”. He continued: “The numbers reaffirm our conviction that in ancillary, we have unearthed a gushing revenue stream that can boost our bottom line and also serve as a buffer to rising fuel prices”.

The results represent the most successful quarter of ancillary revenue spend per passenger for AirAsia Malaysia, with Mr Fernandes added that the carrier has invested “significantly” in technology to enhance the carrier’s strategic capabilities to leverage and deliver new revenue opportunities”. The carrier has medium term targets of MYR50-60 (USD16-19) in ancillary income per passenger, with the newly-launched AirAsia Megastore to further boost ancillary income, the carrier's new loyalty proramme (in 2H2010) and a move to cashless payments on board to aid in this growth target. 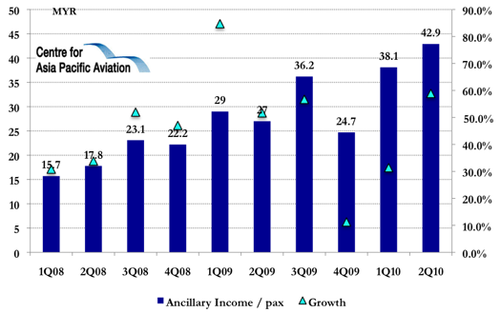 Costs increase, but still lowest cost airline in the world: During the quarter, AirAsia witnessed increases in both non-fuel and fuel unit costs, with Malaysia’s unit cost per ASK rising a concerning 21% year-on-year (+5% exc fuel) and Indonesia AirAsia unit costs increased 16% (and 14% excluding fuel). Thai AirAsia unit cost increases, however, remained in the single-digits, with a 2% increase including fuel and a 8% increase ex fuel.

However, on a unit cost basis, AirAsia continues to be the lowest cost airline in the world, with unit cost per ASK in the USD 3.61 cent to USD 4.49 cent range, and exc fuel unit costs in the USD 2.01 to 2.78 cent range.

The carrier added that the CASK rise was mainly related to fuel and user and station charge increases. 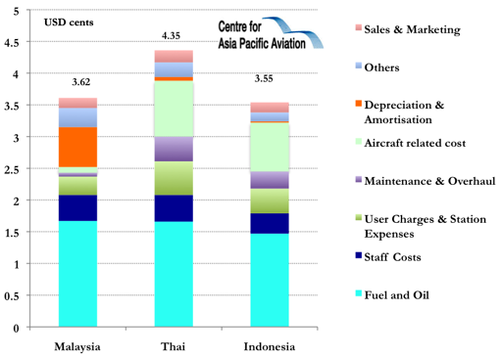 Unit revenues and average fares improve: Unit revenues however improved in the quarter (based on USD figures), with double-digit RASK improvements in the carrier’s Malaysia and Indonesia operations (of 15% and 19%) and double-digit average fare grow in both Thailand and Indonesia (+12% and 23%). Based on local currency data, the growth was more moderate, in the 8-15% range.

Diversity of markets smooths seasonality concerns: AirAsia and its partner airlines are now becoming a sizeable global competitor, with a network of 60 destinations from nine hubs. 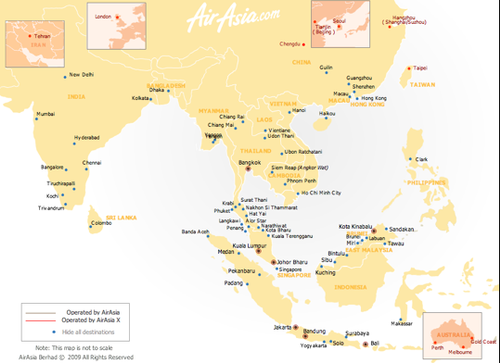 This growing network helps considerably to smooth seasonality effects from various markets. And the synergies with its long-haul arm, AirAsia X, are rapidly growing.

Looking forward, AirAsia has previously stated that “India beckons”, with its 1.1 billion population, USD3.1 trillion economy and over 20 potential airports to operate to. According to Mr Fernandes, “the Indian middle class is growing fast. With our low fares, we can offer them a lot…We have 20 potential airports that we can go to in India. We are not just looking at tourists, but the small and medium enterprises such as the textile businesses that will benefit from these flights”. 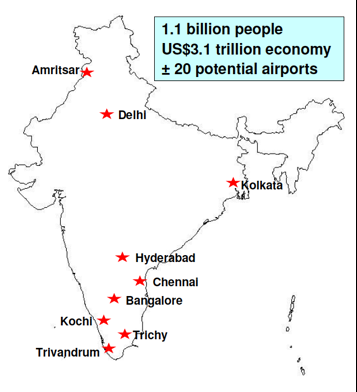 Mr Fernandes commented: “We are continuing to grow our market in India especially from our other hubs in Thailand, making the subcontinent a key player in our growth strategy. We are also completing our final chapter on connecting all the ASEAN capitals from our Kuala Lumpur hub by introducing Yangon destination, making us a Truly ASEAN carrier”.

A key concern for AirAsia is that it is outgrowing its Kuala Lumpur (low cost carrier terminal) LCCT hub, obliging the carrier to defer deliveries of its A320 orders for 2011 to "address capacity constraints" at the LCCT. However, while a concern, the decision could be a blessing in disguise, as its forces the carrier to maintain sustainable growth. The carrier added that no penalty cost was imposed by Airbus for the deferrals. AirAsia is necessarily a large Airbus customer.

Meanwhile, the carrier stated it is seeing the "maturing" of some routes, resulted in lower average fare increases than its subsidiaries, of 8%. This 'maturing' also moderated the growth figures of the carrier, compared to its newer and fast-growing subsidiary carriers.

OPPORTUNITIES – “The power of the associates is unveiled”

The second quarter results of the AirAsia subsidiaries have revealed the “power” of these airlines, with the benefits expected to be realised more fully in the years ahead. These JV airlines present a huge opportunity for the carrier, as the carrier seeks to become a truly pan-Asian airline, and both were in the black in the quarter.

Thai AirAsia; possible IPO:  The Thai subsidiiary's  results were “surprisingly strong” despite the political turbulence in the country which occurred mostly in 2Q2010. AirAsia Thailand recorded revenue growth of 24%, an increase in profit after tax of 161% and EBITDAR growth of 394% in the period, despite the challenging political situation in the country.

This occurred as passenger numbers increased 11% (to 1.3 million with an average load factor of 73.1%, a 5.5 pp improvement), average fares gained 12% and ancillary revenue per pax surged 40%. Unit revenue per ASK was USD04.58 cents in the quarter, a 15% year-on-year increase (boosted by the delivery of three aircraft in the quarter). 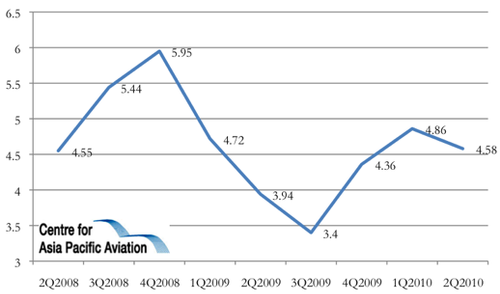 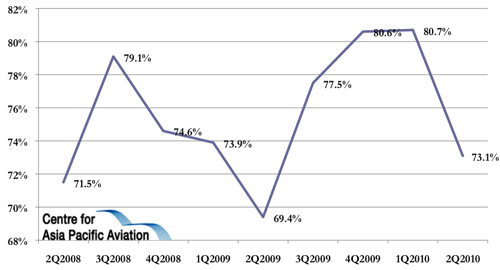 Mr Fernandes added that the Thai JV will “get another boost” with the delivery of new A320 equipment as the carrier transitions to an all Airbus fleet by year-end. He continued: “There’s the potential listing of the company in Thailand next year”.

Indonesia AirAsia: Meanwhile, AirAsia Indonesia's turnaround to profitability, which commenced in 1Q2010, gained pace in the second quarter, with an “astounding” 272% jump in profit before tax, as revenues increased 44% to a record USD73 million, with an EBTIDAR growth of 332% and a profit after tax gain of 272%. Ancillary income per pax also posted a massive increase of 88%. Mr Fernandes commented: “I am excited to see that Indonesia has recorded a profit for the second consecutive quarter”. 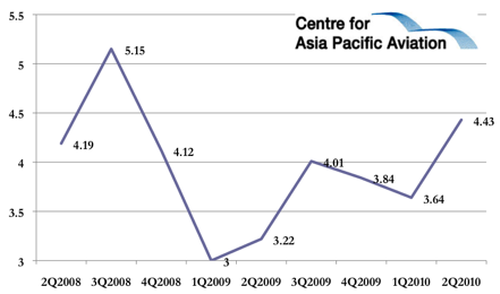 Also during the quarter, the carrier saw a slight load factor improvement to 75%, with the carrier adding that its newer fleet of Airbus helped increase its operating efficiency, while passenger numbers increased 10% in the high season quarter. Meanwhile, yield growth of 18% in the quarter was aided by longer sector lengths and a high take up in ancillary products, with new frequencies being added to higher-yield international routes to ensure that this yield and revenue growth in maintained.

Meanwhile, RASK increased 37% with average fares up 23%, while CASK increases were marginal as the carrier transitioned away from older B737 equipment (CASK increased 3% with no change in ex-fuel CASK, based on US cents data). 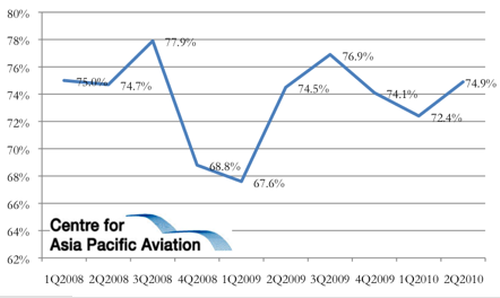 On the outlook for the subsidiaries, Mr Fernandes commented: “Having turned around their operations, Thailand and Indonesia are going from strength to strength”, with the new A320s to further contribute to this improvement, with "increased capacity, lowered operating costs and improved efficiency”, as the older B737-400s are phased out.

Financial position to improve: During the quarter, AirAsia increased its cash balance by 9% quarter-on-quarter, to USD273 million, with total debt also increasing by 6% to USD2.4 billion.

The carrier added that improved net gearing is expected after the previously-announced deferral of aircraft in 2011 and due to the projected deferrals in the 2012 to 2104 period (the carrier has confirmed deferral of seven aircraft to 2013 and plans to reduce aircraft deliveries to between ten and 12 from 2012 onwards). AirAsia expects gearing to be below two times from 2011 onwards, adding that the strong performance of its associate airlines will "accelerate repayment of amount dues and increase cash availability".

The carrier has secured financing for it aircraft through 2010, despite the global credit crunch, with ten aircraft scheduled for delivery during this calendar year.

The price of fuel, as always, remains a potential threat for AsiaAsia, with uncertainty remaining regarding both fuel and currency movements, both of which can seriously affect the carrier’s operations. However, the carrier, which does not implement a fuel surcharge, stated its ancillary business is a "natural hedge" for a rise in oil costs.

Also, the recent announcement of Tiger Airways' expansion into the Thai market through a joint venture with Thai Airways is a cloud on the horizon. A relatively weak Nok Air has not proven a major threat to AirAsia, but Tiger's resilient support base, coupled with a more strategic approach from part owner Thai Airways, is likely to prove a much more formidable competitor for AirAsia - assuming Thai Airways is able to manage the relationship effectively. The new JV carrier will not commence operating until early in 2011, allowing AirAsia further time to entrench its position, but as Thai Tiger expands it will run up against its Malaysia-based elder on numerous fronts.

AirAsia has, throughout the global economic crisis, manipulated the situation to its own benefit, conducting aggressive promotions, as part of its determination to “grow traffic, market share and profits”, with double-digit capacity growth across the carrier’s operations in 2010. While this strategy resulted in weakened yields and ticket prices in 2009, these are now showing signs of recovery in 2010. By also pushing the airline to accelerate its ancillary revenue growth, this has been salutary.

Barring any unforeseen circumstances, AirAsia stated it remains positive about the prospects of the Group in the second half and in the fourth quarter, which is traditionally AirAsia’s strongest quarter.

The outlook for AirAsia’s Indonesian and Thailand operations is also positive, with both carriers expected to witness continued high passenger growth rates and encouraging yield trends, promising continued improvements in the upcoming third and fourth quarters.