AirAsia Japan to be the 5th LCC in 5 years for Japan. Opportunities for all, despite slowing growth

AirAsia Japan has submitted to Tokyo an application for an Air Operator's Certificate to re-enter the Japanese LCC market, its first JV having collapsed in 2013. AirAsia Japan envisions a Mar/Apr-2016 launch from Nagoya, an airport without the heavy competition or curfew AirAsia Japan Mk I encountered at its previous base of Tokyo Narita.

The start-up plans to complete 2016 with six A320s and grow by five aircraft each additional year. In Jul-2015, Jetstar Japan operates 20 A320s, the most of any new LCC, followed by Peach with 16 A320s. AirAsia Japan will be out to show it has learned from past mistakes and can apply its pan-Asian model, with some localisation, in multiple markets.

Japan continues to benefit from this influx of carriers. Domestic growth has slowed to 2%, but Japan saw 92m domestic passengers in its latest reporting year, the highest since 2007. AirAsia Japan will be unique along with Spring Airlines Japan for not being affiliated with ANA or JAL, which directly account for 79% of the market and indirectly for over 90%. Slowing domestic growth has however come with faster 9% outbound international growth. 1H2015 inbound tourism is up a remarkable 46% and Japan will need to set more ambitious targets than 20m visitors in 2020. 2015 could welcome 18 million visitors, up from 10 million in only 2013.

AirAsia Japan (Mk II) applied for an Air Operator’s Certificate with the Japan Civil Aviation Bureau on 21-Jul-2015. Approval could come as early as Oct-2015. AirAsia Japan plans to launch from its proposed base in Nagoya in Mar/Apr-2016 with an initial fleet of two A320s, the same aircraft type used by other AirAsia units.

AirAsia Japan will be the first LCC based at Nagoya although Jetstar Japan has a hub at Nagoya. Jetstar Japan, Spring Airlines Japan and Vanilla Air (which was the original AirAsia Japan before the AirAsia-ANA JV ended) are based at Tokyo Narita while Peach Aviation is based at Osaka Kansai. Nagoya like Osaka Kansai is a 24 hour airport; Narita has a curfew.

AirAsia Japan wants to avoid the curfew as well as heavy competition that now exists at Narita.

Map of Japanese LCC main bases (actual/proposed): as of Jul-2015

This will be a precious fight for AirAsia, which still has sour memories of its first attempt in the Japanese market under a partnership with ANA.

Nagoya will be an interesting market for LCCs to compete in. At the two other LCC cities, Tokyo and Osaka, there is some insulation as the LCCs operate from the international airports (Narita and Kansai respectively) that are further out of town than the domestic airports (Haneda and Itami respectively) that are preferred by travellers and are where ANA and JAL mostly fly from.

Narita and Kansai almost become secondary airports in the classical LCC sense, although Kansai has its own catchment area. (An exception is Peach's new and limited Taipei service from Tokyo Haneda – the only new Japanese LCC at Haneda.)

At Nagoya there is only one airport, so there is no distance equation or trade-off the way there is at Tokyo or Osaka. This will allow for more direct competition between the LCCs and full-service airlines. ANA accounts for a commanding 56% of domestic seat capacity while JAL is second-largest with a 14% share. Jetstar Japan, which JAL partially owns, is third-largest with a 13% share.

JAL's smaller position in Nagoya compared to ANA was one strategic reason for Jetstar Japan to establish a secondary base there, allowing the JAL Group to deploy a dual-brand competitive scenario on ANA. Nagoya has a link to Japan's high-speed train, the Shinkansen, allowing easier rail connections from Nagoya than Kansai and Narita. 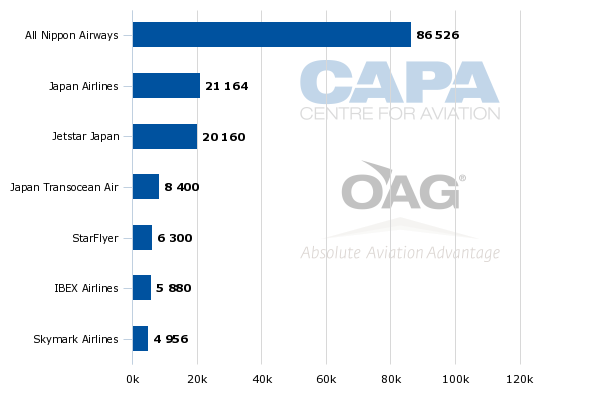 Despite its large domestic size, ANA has a minimal international operation at Nagoya. ANA's only international services are a daily 737 flight to each Hong Kong and Shanghai Pudong.

JAL is the largest international carrier at Nagoya but with only an 11% share of the market, not far ahead of China Eastern's 10% share or Cathay Pacific's 9% share. JAL has daily flights from Nagoya to Bangkok, Honolulu, Shanghai Pudong, Taipei Taoyuan and Tianjin. 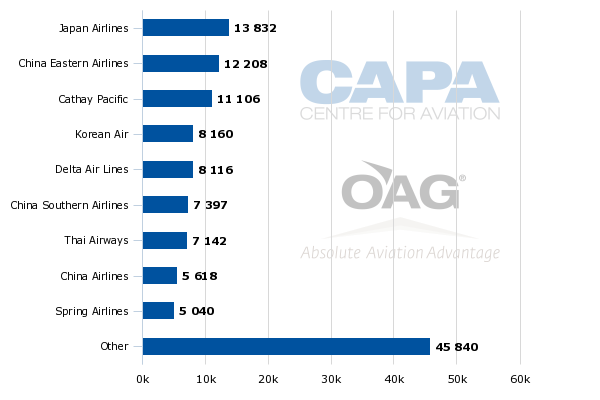 The bubbling development is Spring Airlines, the Chinese LCC that in Jul-2015 has 14 weekly flights from four Chinese cities. Spring plans to grow to eight destinations from Nagoya in the short-term and to 28 weekly flights in autumn 2015 and 42 by end-2015. 42 weekly flights would make Spring Airlines the largest international carrier in Nagoya, surpassing JAL and China Eastern.

Spring Airlines' Japanese unit, Spring Airlines Japan, does not fly to/from Nagoya, so Spring's presence for now is restricted to the Nagoya-China market, which has large opportunity. Spring may very well be laying the ground work for an even larger presence, which could compete with AirAsia Japan's ambitions in Nagoya.

AirAsia Japan expects to make formal route announcements in Nov-2015 with tickets to go on sale shortly thereafter. Long haul sister carrier AirAsia X plans to resume Kuala Lumpur-Nagoya service, which was suspended in Feb-2015. AirAsia X and AirAsia Japan will have some two-way connectivity depending on exact details. However, AirAsia Japan must stand on its own and not rely on connections from its long-haul sister. 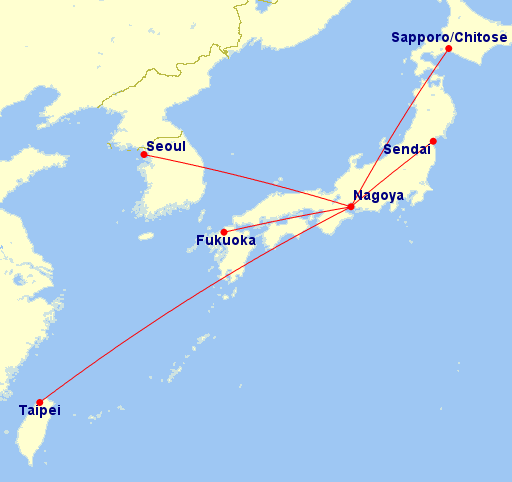 AirAsia Japan will be Japan's fifth LCC in five years

The Mar/Apr-2016 launch represents a delay as the AirAsia Group was, perhaps too optimistically, talking of a late 2015 launch. Earlier in 2015 this timeframe became late-2015, early-2016. AirAsia's interest in Skymark perhaps held back its own JV development in Japan.

Nonetheless AirAsia Japan, if approved, will be Japan's fifth new LCC in five years. This excludes Japan's "new entrants" like Skymark, Solaseed and Starflyer that have a hybrid model leaning towards full-service.

Japanese domestic market grows 2% as ANA and JAL share slips under 80%. Jetstar Japan grows the most 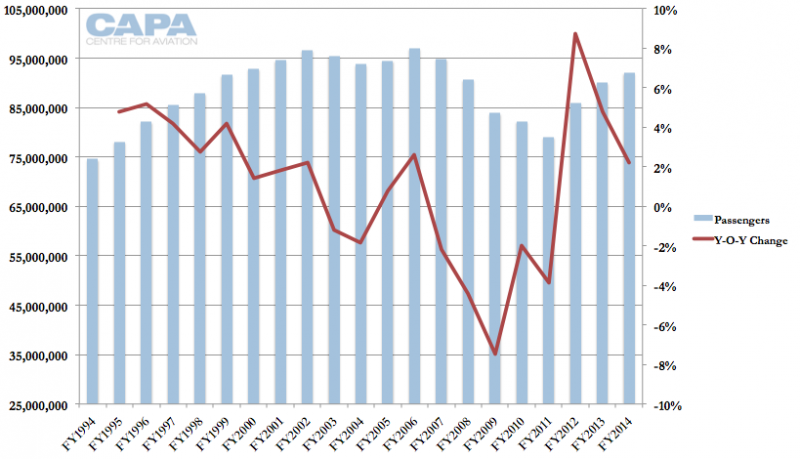 The market remained an ANA-JAL story, with ANA having a 47% share and JAL (including Japan Transocean Air) with a 32%. 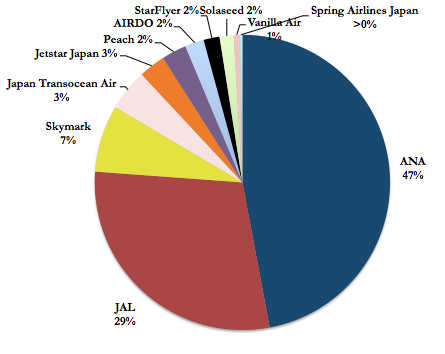 Jointly ANA and JAL accounted for 79% of the domestic market in FY2014, according to MLIT data. This excludes minority ownerships in airlines or ANA's full ownership of Vanilla Air. Only Skymark and Spring Airlines Japan are independent of affiliation with ANA or JAL. Spring Airlines Japan has less than 0.1% share while Skymark has 7%, including a significant Tokyo Haneda slot pool, hence the interest in the carrier.

AirAsia Japan will be another airline independent of ANA and JAL.

AirAsia, as last publicly known, plans to take a 49% stake in AirAsia Japan. Japanese companies will hold necessary majority local ownership, although AirAsia will be the single largest investor, giving significant influence. The other investors are mostly in the aviation/travel space.

The AirAsia Japan investors are: 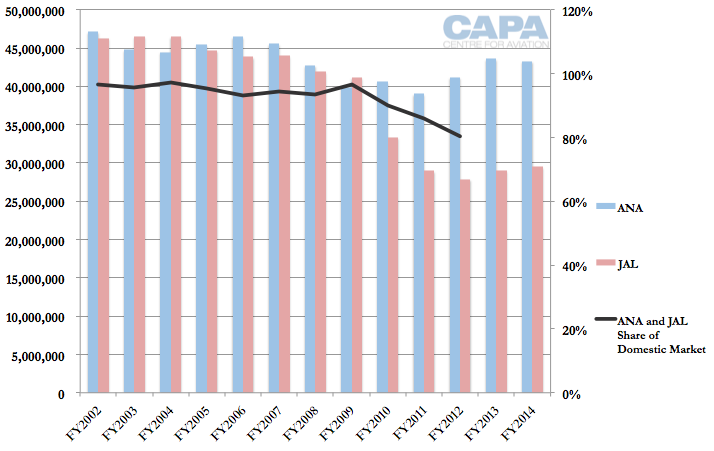 FY2014's 2% growth equates to an additional 1.9m passengers. Jetstar Japan carried approximately two-thirds of these additional domestic passengers. JAL and Peach were the next largest growers. This is some change from FY2013 when ANA took the lead in growth, but in FY2014 actually decreased its domestic volume. 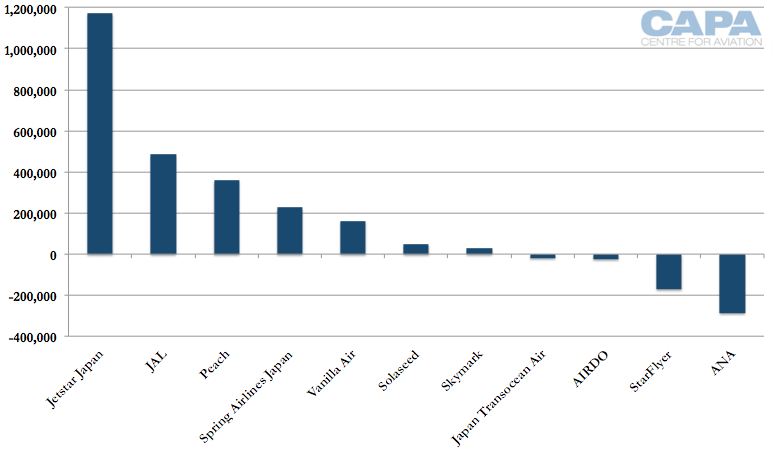 Slowing domestic growth comes with the tradeoff of faster outbound international growth. 16.5 million Japanese travelled internationally (Japanese and non-Japanese airlines) in FY2014, the highest since FY2007's 17.7 million, prior to the GFC and JAL cutting its network under bankruptcy. 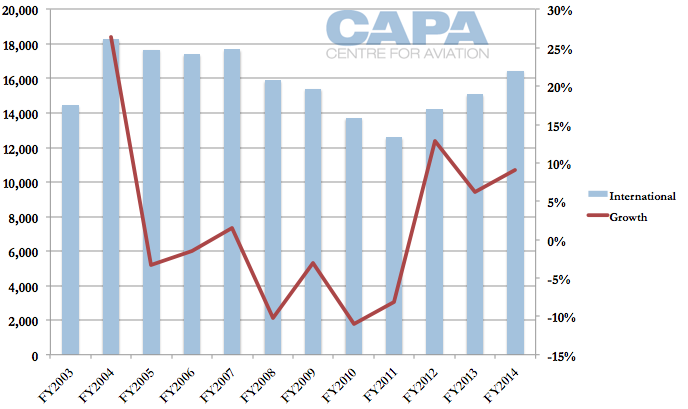 Aided by a weaker yen making the country more affordable, Japan is making a tourism push as it seeks to grow from 10m visitors in 2013 to 20 million visitors in 2020 and 30 million in 2030.

Calendar 2014 showed a record 13.4 million visitors and 1H2015 has achieved growth of 46%. Through Jun-2015, Japan has surpassed where it was in Aug-2014. If this growth continues, Japan could reach 18 million visitors in 2015, putting it well ahead of target. As CAPA previously wrote, Japan's tourism objectives have been underwhelming and are capable of significant growth, especially as visa liberalisation occurs.

Outlook: niches exist for the 5 LCCs to execute their strategies

Japan appears well on target to achieve growth performance from its LCCs. There should now be questions about encouraging domestic versus international growth, and revising tourism objectives to more ambitious targets. Perhaps the most important strategic development in Japan's LCC sector is Peach's access to Haneda.

By selecting under-utilised international night slots for a Tokyo Haneda-Taipei Taoyuan service, Peach is bringing a worthwhile offer to the market. But Peach will surely be asking for more slots and support as the market grows. The supporting evidence for its cause will probably be on its side but there are considerable legacy forces still at work.

It seems five LCCs are capable of finding niches. The question is if they can execute their strategies. Spring Airlines Japan has been waiting on approval for international services and Vanilla Air is still working towards serving less competitive leisure points.

The AirAsia group will be launching its Japanese operation at a busy time as it tackles weakness in some of its other affiliates. For AirAsia, its Malaysian and Thai units are strong since it was the first mover in those markets.

AirAsia is no longer the first, or even among the first wave, in Japan, but the country's LCC experience is still young, perhaps allowing AirAsia Japan to find a strong spot. As CAPA last assessed:

Learning from its past experience is critical to ensuring its success, and here AirAsia was not completely free of blame. The objective for AirAsia Japan is now to excel in its own right, independent of a Japanese airline. Along with the new Spring Airlines locally based operation, it will differ from all the incumbent LCCs in that it is not linked.

That will help demonstrate AirAsia's capabilities as a Pan-Asian LCC that can work with a home base in any market – and one day, perhaps China.