Japan has an extremely ambitious tourism target, to raise its 10 million visitor arrivals to 20 million in 2020 and 30 million in 2030. But these targets are in fact entirely feasible, and perhaps even conservative, given the stringent visa policies around regional Asia that only in recent times have been relaxed, but not fully liberalised.

Japan has achieved visitor growth of over 50% from Thailand, Malaysia, Indonesia and Vietnam following relaxation of border formalities. These are Japan's smaller Asian markets but can contribute significantly to its growth needs, and diversify its arrival streams. Four North Asian markets – China, Hong Kong, Korea and Taiwan – account for two-thirds of Japan's total visitor arrivals.

China has the biggest growth opportunities of all and is the next to have its visa rules relaxed. The biggest beneficiaries will be Chinese airlines and, later, Japanese LCCs. Asian visitor growth will involve Japan shifting its focus away from long-haul markets: Asian visitors comprised 64% of arrivals in 2000, but are now up to 81%. Japan in 2010 was the third most popular outbound market for Chinese, but in 2013 slipped to seventh place, suggesting considerable upside. 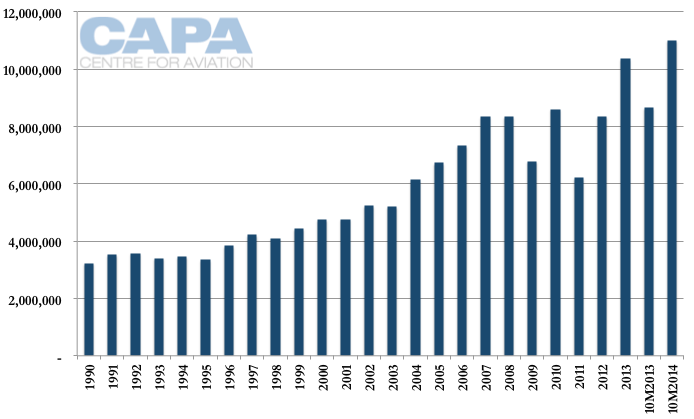 The growth has occurred as Japan has unlocked pent up demand from regional Asian countries that have previously been subject to onerous visa procedures. Visitors from Asia comprised 81% of all arrivals in 8M2014, the most recent available period regional data (if there is one visible sign of Japan improving its tourism accounting, it should include more timely reporting). This is up from 69% in 2005 and 63% in 1990, indicating a quickening pace of Asian growth.

Recent years have been affected by economic issues in Europe and North America, which could impact inbound visitors, but Japan was never going to reach its visitor figure aspirations without liberalising regional market access. 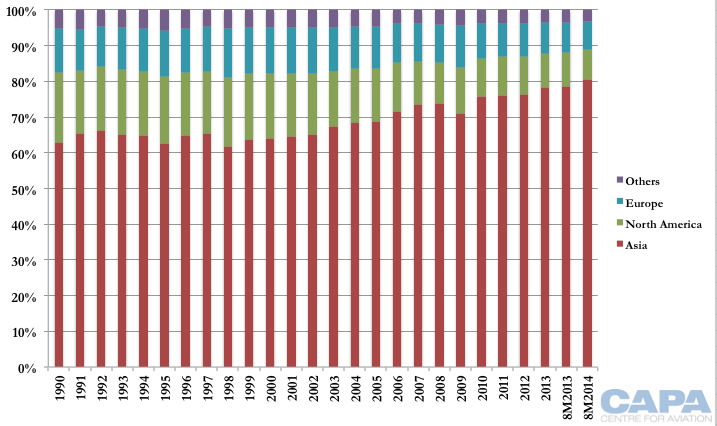 Chinese visitor arrivals have fully rebounded in Japan, and will overtake Korea as largest source market

Japan's visitor arrivals were impacted in 2011 from the Mar-2011 earthquake and tsunami, with a smaller impact in 2012 from a drop in Chinese visitors due to a territorial dispute that sparked nationalist feelings. Relations between Japan and China are still less than warm, famously evident by the photo of Japanese Prime Minister Shinzo Abe greeting Chinese President Xi Jinping, with both frowning. 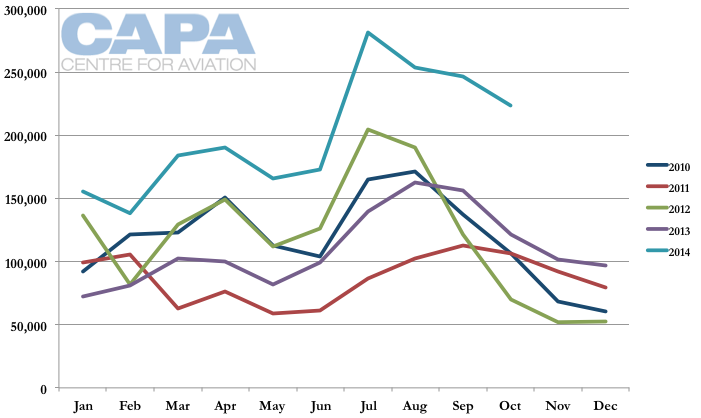 Japan in Oct-2014 announced a series of reforms for Chinese visitors, but not yet full liberalisation. The policies take effect 17-Jan-2015 and are as follows:

(1) Requirements for multiple-entry visa for applicants with a short-term business purpose, and for cultural or intellectual figures will be partially relaxed.

(2) The financial requirement will be relaxed for individual tourists applying for multiple-entry visas for Okinawa and three prefectures in Tohoku, who have travel record to Japan in the last three years.

(3) For individual tourists, a new multiple-entry visa without the requirement of visiting either Okinawa or one of three prefectures in Tohoku will be introduced, for those applicants with substantially high incomes.

There is still some discretion, but the essential part is that wealthy Chinese will be able to secure a multiple-entry tourist visa without visiting Okinawa or one of the three prefectures in Tohoku (Iwate, Miyagi or Fukushima).

Those three prefectures were hardest hit by the Mar-2011 tsunami and this measure was aimed as a way of boosting tourism and leading an economic revival in that area, as well as Okinawa, where Japan is trying to increase foreign tourist interest. Okinawa is supporting charter flights in the hope of increasing demand from elsewhere in Asia.

Japan's four largest Asian source markets – Korea, China, Taiwan and Hong Kong – accounted for 84% of arrivals in 8M2014, meaning two-thirds of Japan's total visitor arrivals originate from only four markets (implying that growth in smaller Asian markets can contribute to diversification.) Chinese visitors accounted for 22% of all Asian visitors in 2011 and 2012, but dipped to 16% in 2013.

The figure has rebounded to 22% in 8M2014. Depending on the success of the visa relaxation and wider relations between Japan and China, Chinese visitors could overtake Korean visitors in 2015 as Japan's single largest market. If this is not achieved in 2015, it will another year – an inevitable outcome other countries will manage too. 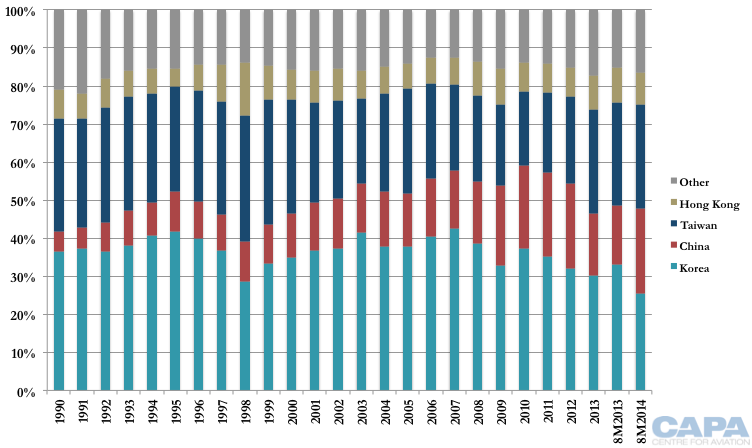 Japan has been losing popularity amongst Chinese tourists

While Japan may be experiencing an increase in Chinese visitors, other markets are growing faster, causing Japan to drop in the rankings of China's outbound travel preference. Japan was the third most popular destination between 2008 and 2010, effectively making it the most popular market outside greater China (Hong Kong is first and Macau second).

In 2013, Japan slipped to seventh place as visa-friendly markets like Korea, Thailand, Taiwan and the US nudged up. Full year 2014 figures are not yet available.

Chinese airlines will benefit most from relaxed visa policies

Chinese carriers already account for 60% of available seats between Japan and China in Jan-2015. Japanese carriers hold 38% while two third-country carriers (Delta and Etihad) comprise 2%. The Japanese side is made up of only ANA and JAL whereas the Chinese side has 11 carriers. More Chinese airlines are likely to grow as regional Asian destinations will be some of the first permissible international destinations under the CAAC's supervision. Japan, Korea (Jeju and Seoul) and Thailand (Bangkok) will be especially popular.

ANA is the single largest carrier in the China-Japan market, while China Eastern and Air China are not far behind.

JAL is much lower down as the fourth biggest. China Eastern and Air China reduced their capacity during the sour relations but have now rebounded. China Southern's capacity, however, remains reduced. 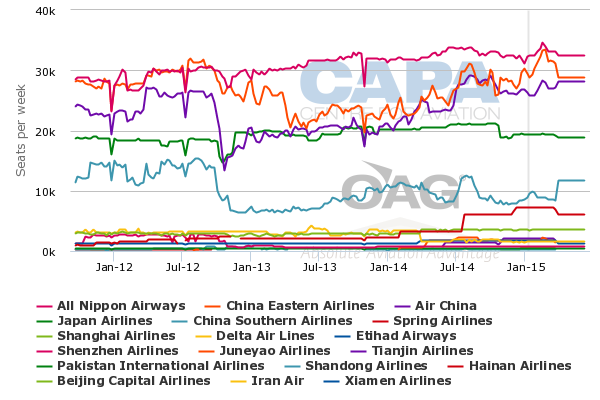 Japanese LCCs will seek a role in expanding Japan-China market

There will likely be additional Japanese entrants, too. Spring Airlines Japan, a unit of the Shanghai-based Spring Airlines LCC, effectively incorporated in Japan in order to launch China-Japan services that it cannot launch (either at all, or as fast) on its Chinese licence. Japan's other LCCs would also be interested in the Chinese market and willing to have red-eye services.

Japan-China yields are high, and red-eye services would not only boost aircraft utilisation for the Japanese LCCs but would be popular with cost-conscious Chinese passengers who could leave China past midnight and arrive in Japan very early in the morning. This very low yielding market has already proven itself with LCCs on Korean routes.

Although this equates to only an hour or two of sleep, such red-eyes would be seen as providing a full day in Japan without having had to pay for accommodation the night prior. Likewise on the return they could have a full day in Japan before leaving late at night.

Japan's visa relaxation has already had a positive impact on Southeast Asian countries, where policies were relaxed in 2013. Thailand is Japan's largest Southeast Asian market and Thai visitor numbers to Japan increased 74% in 2013 compared to 2012, following relaxation of border rules. 8M2014 visitors are up 57% from the previous year. 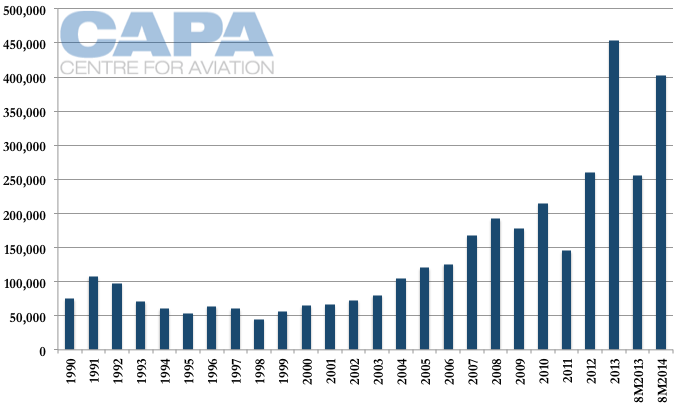 These figures are shaping air routes. Thailand-Japan is experiencing large growth and new long-haul LCCs Thai AirAsia X and NokScoot are making Japan their inaugural markets. There are also many ("non-scheduled") charter operators whose data are not fully reflected on the scheduled capacity graph below. 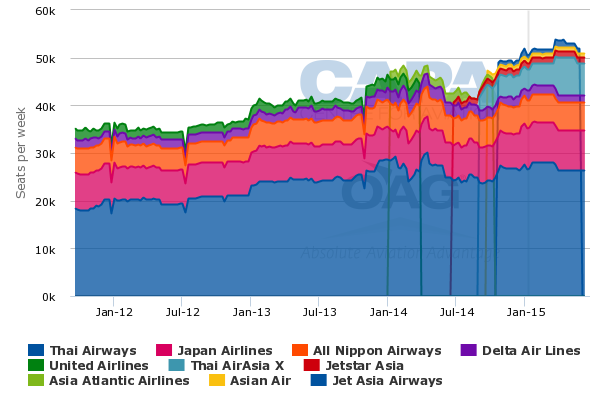 Malaysia has grown with additional AirAsia X services while ANA is planning to add a new service to Kuala Lumpur, its first in Malaysia. 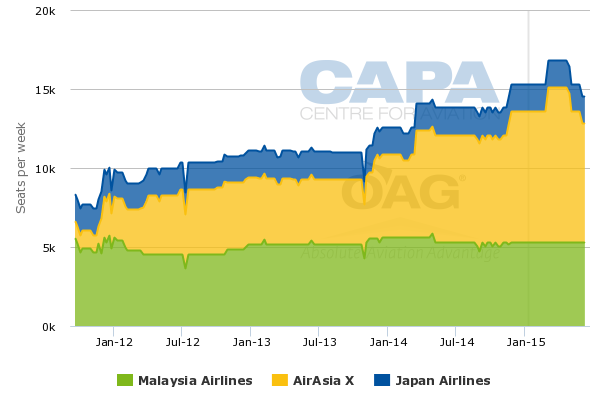 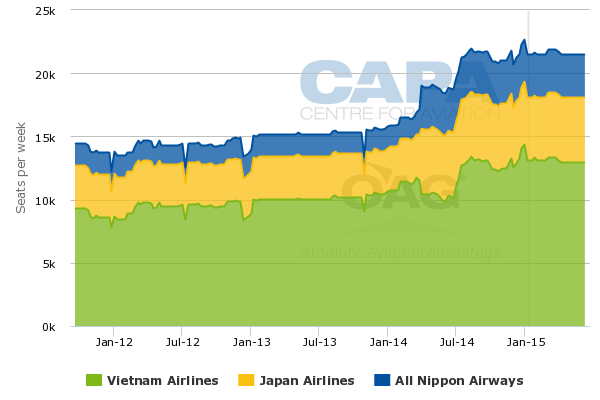 Garuda Indonesia has led a big push into the Japanese market while ANA and JAL have also grown. 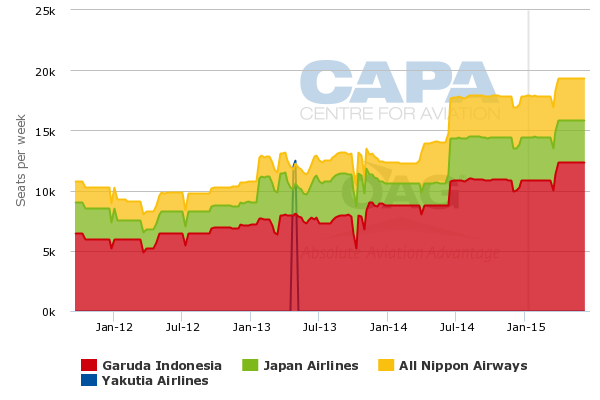 When it comes to increasing visitor numbers, Japan has been sitting on its hands. The biggest challenge is not finding visitors, or even negotiating Haneda slots, but being willing to accept more visitors in a society that does not always want them.

The growing number of air rage incidents in China fuel the nationalist, and superiority, element in certain parts of Japanese society. But Japan's leadership will no doubt want to stick to its targets, knowing the export value of tourism, with little need for government investment. Indeed, 20 million visitors by 2020 is even potentially an underestimate when considering how much visa relaxation remains to be implemented.

Moving fast, as Korea has done with China, could stimulate even more rapid growth that will radically re-shape Japanese inbound tourism.

In 2008, Korea received 17% more Chinese visitors than Japan. In the full year 2013 the figure was 229% with Korea welcoming three times as many Chinese visitors as Japan. This was despite Korea overall having 12.2 million global visitors in 2013, 18% more than Japan – a significant number, but not nearly as large as 229%. 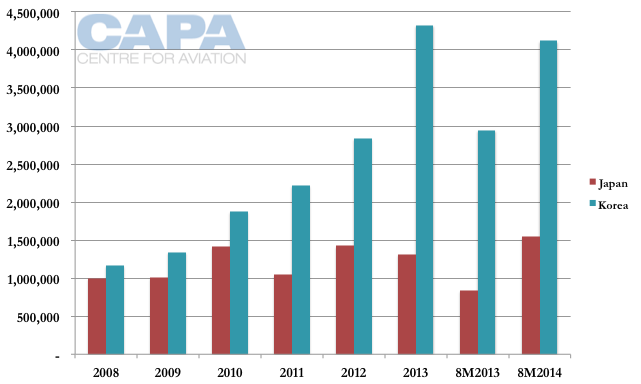 Korea's influx of tourists, or Hong Kong's or Taiwan's for that matter, has not come without criticism and an element of popular pushback. Japan is not a country where sudden and fast changes are readily accepted by a conservative populace. Visa relaxation can be managed in a way that allows adjustment of the pace of change - although a doubling of inbound visitors by 2020 does imply a rapid rate.