The much-celebrated growth of Chinese tourism is not occurring evenly. An additional 3.8 million Chinese visitors travelled to core Northeast and Southeast Asia in 2014 compared to 2013, representing 19% growth. But this growth was concentrated exclusively in Northeast Asia while Southeast Asia actually contracted. This excludes Thailand, which is earning its "Teflon Thailand" reputation: after flat performance over much of 2014 due to political uncertainty, Chinese visitors have sprung back up to all time highs. Its neighbouring countries are far less fortunate. It is little wonder Korea, Thailand and Japan are the largest growth markets for Chinese airlines.

Despite weakness in Southeast Asia, foreign airlines are typically not planning to further reduce capacity. As one example, Singapore Airlines instead plans to link outbound China traffic with other markets, such as Australia.

Rapid growth within Northeast Asia now means that Chinese visitors have come to define tourism profiles: they accounted for 18% of all visitors to Japan in 2014, 43% to Korea and 40% to Taiwan. Such high shares become contentious locally – and risks that countries and airlines need to carefully manage.

These figures include, in Southeast Asia: the top markets of Cambodia, Malaysia, Philippines, Singapore, Thailand and Vietnam; and in Northeast Asia: Japan, Korea and Taiwan.Hong Kong and Macau are excluded because most visitors arrive by surface transport from nearby cities in Southern China, meaning they are not actively choosing to fly to a destination and decide where to go. Many mainland visitors to Hong Kong are making same-day business trips. 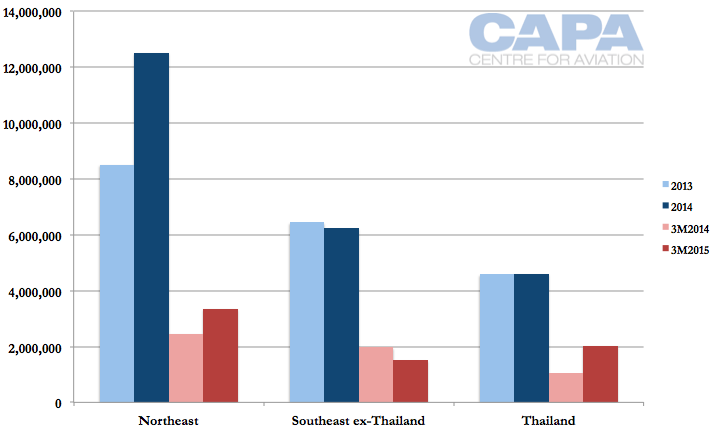 The gains are going to Northeast Asia, which jumped from a 44% share of regional visitors from mainland China in 2013 to 53% in 2014. This was partially helped by weakened demand to Thailand due to the political situation. Thailand rebounded in late 2014, and Northeast Asia's 49% share in 3M2015 is slightly ahead of its 45% share in 3M2014. 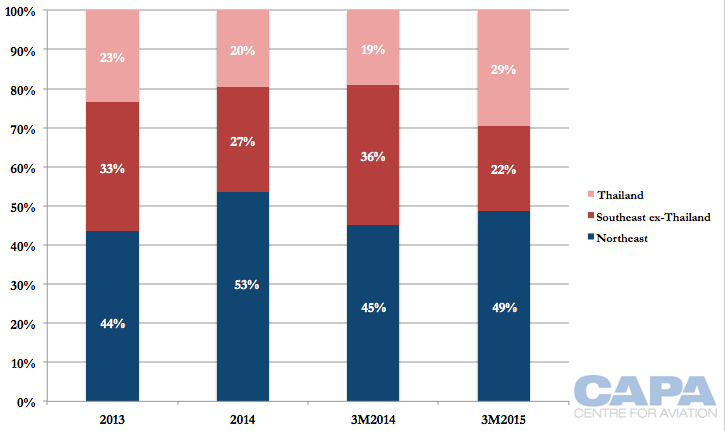 Despite negative arrival trends, airlines are not cutting Chinese capacity

Airlines are feeling the impact from the visitor arrival trends. Singapore saw a 24% decrease in Chinese visitors in 2014, and a 8% decline in 3M2015. As SIA CEO Goh Choon Phong remarked in May-2015: "What has happened and we observe is, in particular from China, there is a lot of Chinese traffic also going to Japan. And there is a substitution effect there. Because if they are traveling more to Japan, they travel less to other parts of the world, including Southeast Asia. And that of course includes Singapore."

Singapore Airlines and its full-service regional unit SilkAir are not cutting Chinese capacity. OAG data for 3Q2015 indicates they will grow just under 5%, comprised of some growth at SIA but more at SilkAir. (Also at Singapore, Scoot will see a large contraction as the result of switching to 787s from 777-200s, which the carrier has long viewed as being too large.) 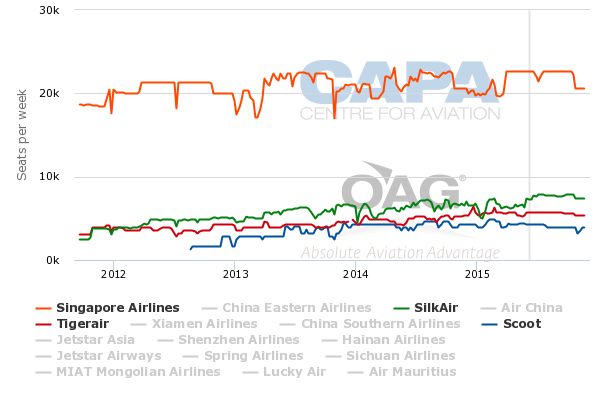 With point-to-point China-Singapore demand weakening, SIA is instead looking to boost connectivity beyond Singapore for its China traffic, such as to Australia. Other markets are challenged however given the general downturn from China in visiting Southeast Asia, SIA's backyard. Only Bangkok is strong, but is too circuitous to reach via Singapore.

"We have lots of connectivity. We're able to source for other traffic. Of course it could be at a different yield to fill up some of the slack...all these are other sources that we can tap to actually fill up some of the decline, for example, of the ex-China traffic that used to be on us, but now are switching to visit Japan," Mr Goh said. 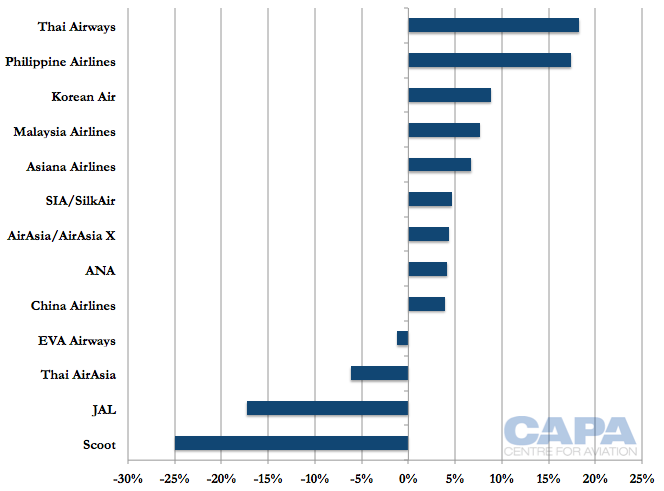 Thai Airways is forecast to grow 15-20%, supported by demand to Thailand. As seen on the graph below, Thai Airways made relatively minor adjustments to China capacity in 2014 during the political uncertainty. Thai's 3Q2015 capacity will be higher than in past years. 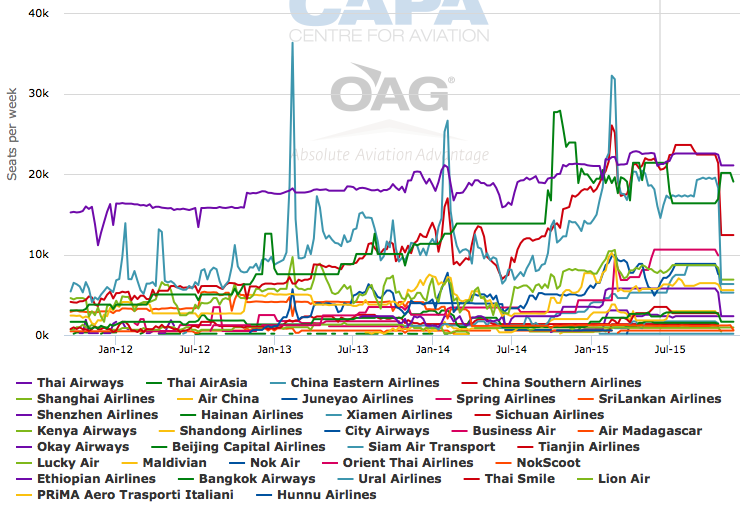 Malaysia Airlines and Philippine Airlines will also have notable growth in 3Q2015. This is from a reduced base they cut capacity in 2014. However, restoring the capacity indicates that despite the continued visitor declines there is some confidence – or a reckoning is to be had.

The AirAsia Group in Malaysia will grow in China as well, comprised of growth at AirAsia and a slight contraction at AirAsia X. 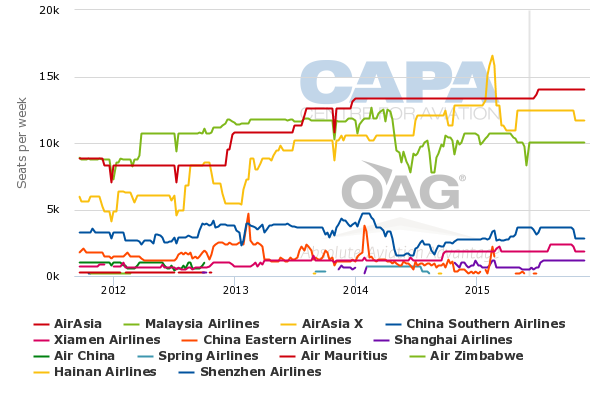 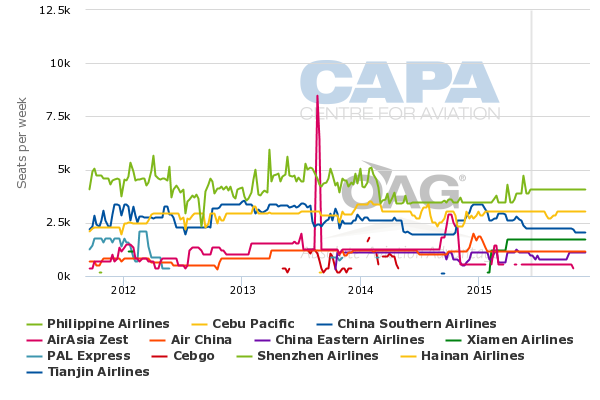 As for Chinese carriers growing internationally, CAPA previously looked at their growth in 3Q2015. As of schedules filed in May-2015, it is regional markets – Korea, Thailand and Japan – that lead growth. In 3Q2015 there will be an additional 1.4 million seats to Korea offered by Chinese airlines, 800,000 to Japan and 480,000 to Thailand. The US is the only other major growth market, with a planned addition of 190,000 seats. Thailand is a standout from the Chinese arrival weakness in Southeast Asia, perhaps further earning its nickname "Teflon China". Chinese arrivals to Thailand were up under 1% in 2014. Although this was not a contraction, it followed years of growth. Oct-2014 marked a turning point of the Chinese visitor market rebounding, with Oct-2014 and every month since then posting not only year-on-year growth but record arrival figures for that month. 3M2015 visitor arrivals are up 96% from 3M2014, and 81% from 3M2013. 2014 Chinese visitor arrivals to Thailand dipped below 2013 levels between Feb-2014 and Sep-2014.

There is a large number of charter operators in the Thailand-China market, and new long-haul LCCs NokScoot and Thai AirAsia X hope to capture the market as part of their Thailand-North Asia focus. 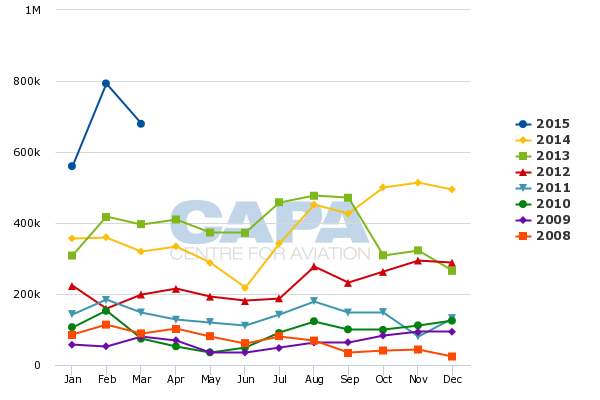 Source: CAPA - Centre for Aviation and Thailand's Ministry of Tourism and Sports

Aside from Thailand, only Cambodia has recorded growth from Chinese arrivals in terms of Southeast Asia's major markets. This however is still a small market and far from enough to make up for the decreases elsewhere. The Philippines and Vietnam have been impacted by political events (rioting in Vietnam against Chinese and a territorial dispute between China and the Philippines) while Malaysia has suffered as a result of the MH370 tragedy and suspicions about Malaysia's handling of the incident.

Although Thai tourism is recovering from China, Singapore appears too small and expensive of a market for Chinese to go out of their way to visit. 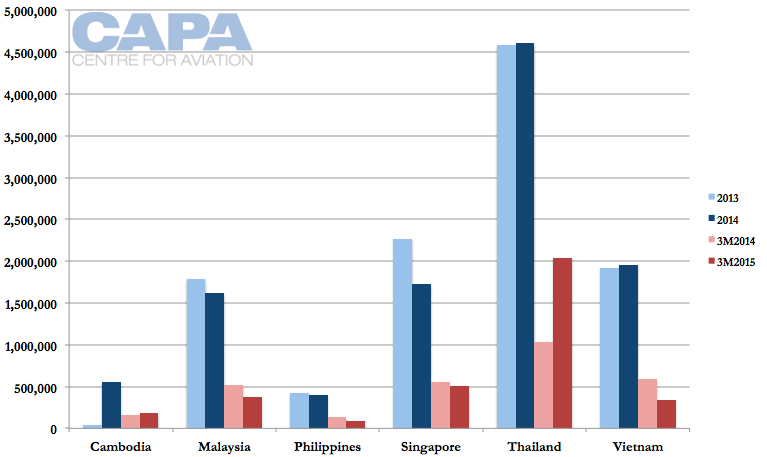 There will be some concerns as these markets are shaped and defined by Chinese visitors, who in 2014 accounted for 18% of all visitors to Japan, 43% of all visitors to Korea and 40% to Taiwan. Their share will increase as 2015 progresses. Although a sometimes difficult topic, it is a good problem to have, economically speaking. Further growth remains as visa liberalisation occurs and there are expansions of air traffic rights; both Korea and Taiwan have so far gained only modest additional traffic rights. 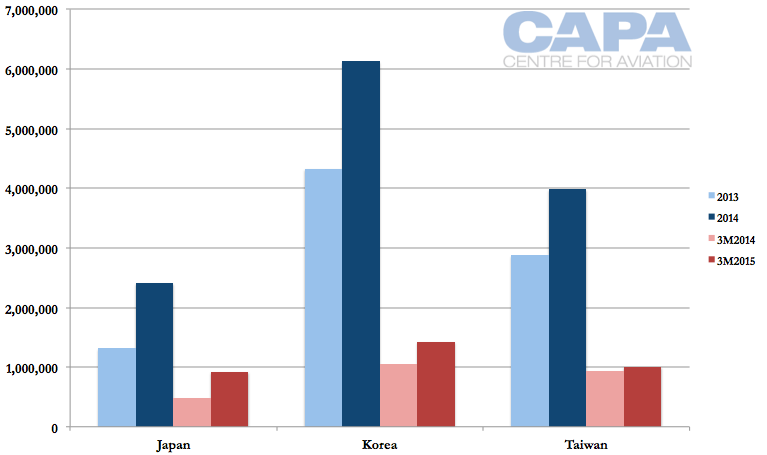 The experience of Taiwan and Korea in recording massive growth from mainland China is an indication of what other countries could expect to experience (to varying degrees) when there is alignment with tourism forces.

Not so long ago Japan provided a reminder of what can happen when any force – within or outside a country's control – impacts tourist flows. Now Japan is in the growth basket with Korea and Taiwan (although there are some signs of weakness with Taiwan) - while Southeast Asia becomes the new Japan in terms of experiencing a slowdown. A political message of support from Beijing to Malaysia, the Philippines and Vietnam could reverse their current misfortune. This is far easier said than done as tensions remain high – and in some instances, are growing.

Singapore could benefit from renewed Chinese interest in Southeast Asia, but ultimately it is a high cost locale surrounded by many low cost countries. As the recent emergence of Cambodia as a Chinese hotspot shows, the options are continuing to grow. As CAPA previously summarised Chinese tourism:

These Asian markets have been the early recipients of the largest Chinese outbound flows and have quickly adapted to a recognition that the China market will progressively swamp all others. Consequently, with such rapid and substantial growth, any slowdown can quickly have a pronounced impact on any inbound market. This looks very likely to be a feature of this new tidal wave of growth, no matter what market. Chinese media and shifts in political winds can abruptly – but often temporarily – turn off traffic flows. Excessive reliance on any one tourism source inevitably creates this problem.

So, for tourism authorities at the forefront of this expansive growth, it will be wise to adopt risk management strategies that are more thoughtful than they have previously needed. There is little doubt that in the long term Chinese tourists will change the face of global tourism. But managing the short and medium term blips will be a big part of a China tourism strategy.