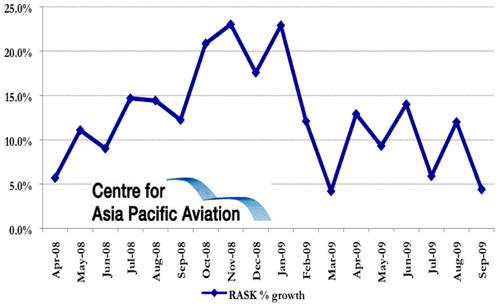 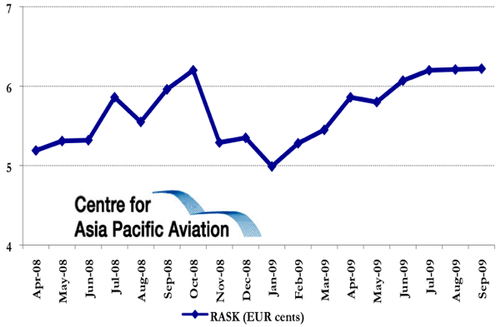 Air Berlin has also benefited from trade downs by business travellers from full service carriers. CEO, Joachim Hunold, previously stated the slowing economic conditions in Europe “could be an opportunity for us, as it increases cost-consciousness”.

The German LCC transported 2.7 million passengers in the month, a 5.0% reduction, as the carrier implemented a targeted 4.8% capacity (ASKs) reduction. Load factor decreased 0.2 ppts to 82.3% in the month.

Despite the carrier’s capacity contractions, Air Berlin is continuing to gain market share, as growth in the European market continues to shrink at a greater rate. 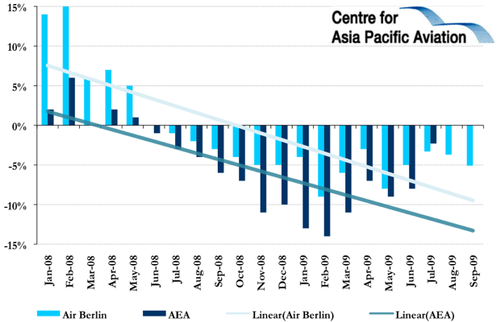 In other positive news for the carrier, Air Berlin announced that LTU management has negotiated a settlement with ver.di, the service workers’ union, with regard to the airline’s cabin staff, and VC (Vereinigung Cockpit), with regards to its cockpit personnel, meaning the Air Berlin subsidiary has now concluded all its collective negotiations. Each agreement involves improved productivity.

This is a positive development for Air Berlin, which was forced to cancel several German domestic services and an LTU long-haul service on 31-Aug-2009, due to a one-day strike by some of its Cockpit Pilots Union pilots.  The pilots also enacted a similar strike in Apr-2009.

Air Berlin and Turkey's Pegasus Airlines have commenced cross-linking of their websites, providing both companies with new market opportunities. Under the agreement, passengers are able to book 17 additional connections from Germany to Turkey, as well as 26 routes within Turkey.

The partnership is not a traditional interline or codeshare agreement and is similar to that in place between JetBlue and Aer Lingus. Such an agreement enables the carriers to avoid the costs and challenges of a traditional codeshare arrangement, by having a partnership primarily based on connecting the airline’s respective websites.

According to Air Berlin CEO, Joachim Hunold, “the cross-linking of the Internet portals will enable Air Berlin to increase its presence on the Turkish market. In return, Pegasus Airlines will benefit from having greater access to the German market."

The cooperation agreement follows Turkish ESAS Holdings’ acquisition of a 15.3% stake in Air Berlin earlier this year. ESAS Holdings is the second largest industrial and financial group in Turkey and the owner of Pegasus.

In fleet news, Air Berlin and GECAS announced the delivery of two new A320-200s to Air Berlin. GECAS acquired the aircraft through a purchase and leaseback transaction with the airline. The aircraft are part of an existing order agreement between Air Berlin and Airbus.

Air Berlin is expected to have over 130 outstanding aircraft for delivery at the end of 2010, including 25 B787s.

However, the LCC has stated it intends to review its order for 25 B787s, the first of which is scheduled to be delivered in 2013. The carrier, which plans to make a decision in the next few months, stated this decision would be based not only on the programme status, but also on its own long-haul strategy.

The recent fleet deliveries will help accommodate the carrier’s expanded Winter Schedule (01-Nov-2009 to 30-Apr-2010), as part of which the carrier plans to add ten new destinations and 54 direct services to its route network.

As part of the new schedule, Air Berlin is positioning itself as the largest German carrier in Italy and strengthening its presence in Austria:

In addition to expanding its service, especially from Cologne and Stuttgart, the airline will soon commence operations from Memmingen Airport. For the first time ever, Air Berlin is also offering a new service from Cologne/Bonn to Morocco and Tunisia, with services to Tangiers, Nador and Tunis.