Phu Quoc in southwest Vietnam continues to see a surge in capacity as the island emerges as a popular tourist destination. Phu Quoc now has Vietnam’s fifth largest airport, having risen four places since a new airport opened in late 2012.

Phu Quoc seat capacity has more than doubled over the past two years, driven by the launch of services from Vietnam’s two LCCs, VietJet Air and Jetstar Pacific, and expansion from flag carrier Vietnam Airlines. Phu Quoc is poised for further rapid growth in 4Q2014 as it becomes the sixth Vietnamese airport with international services, as Vietnam Airlines launches flights to Singapore and Cambodia’s Siem Reap.

The island resort airport of Phu Quoc is currently served by 218 weekly flights to three domestic destinations, providing about 34,000 weekly seats, according to CAPA and OAG data. This makes it Vietnam’s fifth largest airport based on current seat capacity.

Only the three main cities of Ho Chi Minh, Hanoi and Da Nang as well as the beach destination of Nha Trang (located on Vietnam’s south-central coast) have larger airports.

Phu Quoc Airport currently only handles scheduled domestic flights but was designated an international airport when it opened in Dec-2012. Previously Phu Quoc had a smaller airfield which could only accommodate regional aircraft. Phu Quoc’s original airport was the ninth largest in Vietnam, based on capacity figures from 2012.

International services are part of a broader push by Phu Quoc

The two international routes will initially only provide about 1,100 weekly seats but represent a major breakthrough in Phu Quoc’s development. Vietnam is keen to develop the island into a major international tourist destination. Vietnam sees Phu Quoc as potentially emerging as the next Phuket or Samui, aiding efforts by Vietnam’s fast-growing tourism sector to boost its global profile and close the gap with much larger Thailand.

The new airport on Phu Quoc was a major investment for the Vietnamese government as it includes a 3,000m runway capable of handling widebody aircraft and a terminal with customs and immigration facilities that is designed to handle up to 2.6 million passengers per year. In its first year of operation in 2013 the airport handled only 683,000 passengers with foreign visitors accounting for about 37% of the traffic. But authorities are optimistic the 2.6 million passenger figure will be reached by 2020, boosted by international services and an influx in foreign visitors.

To encourage international tourist growth, Phu Quoc has been established as the only visa free zone in Vietnam. The ability to visit the island without a visa lifts a major barrier and makes Phu Quoc competitive with popular islands in other parts of Southeast Asia including Malaysia and Thailand. It also gives Phu Quoc a competitive advantage over the Vietnamese beaches near Nha Trang or Da Nang, where visas are still required.

Vietnam is also investing heavily in improving the infrastructure in Phu Quoc, in particular the island’s notoriously bad roads. Several new hotels are also being built to prepare for the expected influx of visitors.

Phu Quoc has been trying to woo foreign carriers since the new airport opened in late 2012 but airlines outside Vietnam have been reluctant to launch services, primarily because of infrastructure concerns. The new Vietnam Airlines services could prompt several airlines to relook at the market, particularly if the flag carrier can prove there is sufficient demand to support international services.

The new routes could prove challenging and Vietnam Airlines is likely launching them as part of a government mandate. But Phu Quoc has huge potential and with the right marketing campaigns the services could succeed at boosting international visitor numbers.

Phu Quoc-Singapore will be a short 90 minute flight, minimising the airline's risk exposure. However, filling a 184-seat A321 will not be easy, particularly during the initial start-up period and off-peak months. Phu Quoc is not a well known destination in Singapore and will have to compete for Singaporean outbound tourist traffic with several popular beach destinations that have more frequent service, including from LCCs.

As the local Singapore-Phu Quoc market is relatively small, connections to other international destinations will likely be needed for the route to be viable. Vietnam Airlines will have to rely on interline connections as it currently only codeshares on its Singapore routes with Jet Airways and Etihad Airways.

Vietnam Airlines currently operates five daily flights to Singapore, including three from Ho Chi Minh and two from Hanoi, all with A321s. These are very different markets from Singapore-Phu Quoc as on its existing Singapore routes Vietnam Airlines mainly carries Vietnamese passengers heading to Singapore for holidays or work.

Singapore Airlines' regional subsidiary SilkAir could be a better fit for the Singapore-Phu Quoc route as it would be able to offer online connections with SIA throughout Asia, Australia, Europe and North America. SilkAir is now the only airline from Southeast Asia serving Da Nang.

But SilkAir is unlikely to launch Phu Quoc or any other secondary market in Vietnam until it is more proven. Improvements in the island’s overall infrastructure and the construction of more high end resorts would also be key to wooing an airline like SilkAir. It will take more than simple tourism and airport incentives.

Phu Quoc has also tried to attract foreign LCCs including AirAsia. But at least for now the market is probably not mature enough to support any foreign carrier – full-service or low-cost. Vietnam Airlines' role is probably to help seed the market and pave the way for scheduled services from foreign carriers.

The other new Vietnam Airlines international destination from Phu Quoc, Siem Reap, is even lower risk as it a short turboprop flight. Vietnam Airlines also can leverage its strong position in the Cambodian market, where it is the largest foreign airline and has a 49% stake in flag carrier Cambodia Angkor Air. Its knowledge of the Cambodian market should help Vietnam Airlines market the new Phu Quoc-Siem Reap route, which will be mainly geared to foreigners visiting the tourist town of Siem Reap and surrounding temples.

Foreigners now visiting Cambodia often combine Siem Reap with Thailand, including a stay at a Thai beach destination. Being able to offer Phu Quoc as an alternative beach destination to Thailand could gain traction if marketed well in source markets such as Australia, Japan and Europe.

The Siem Reap-Phu Quoc route however could be controversial in Cambodia, which is keen to develop the Cambodian beach town of Sihanoukville. Cambodia Airports opened an airport in Sihanoukville several years ago but so far has only been able to attract limited domestic service. Cambodia Angkor Air, which Vietnam Airlines has traditionally managed, only currently serves the airport with one daily ATR 72 flights from Siem Reap and has been reluctant to expand at Sihanoukville.

Cambodia has been keen to attract more regular domestic services at Sihanoukville as well as international services as part of an effort to boost its tourism sector and attract Siem Reap visitors to stay in Cambodia rather than hop over to Thailand or Vietnam. Sihanoukville and Phu Quoc are seen as competitors as they are only about 50km apart (Phu Quoc is located near the Vietnam-Cambodia border). 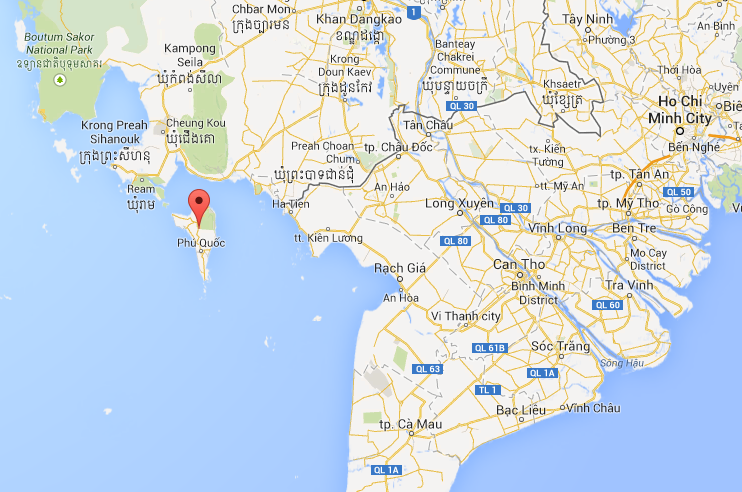 Vietnam Airlines' investment in a Phu Quoc-Siem Reap link rather than a new route at Sihanoukville through its Cambodian joint venture may end up ruffling feathers. But the reality is Sihanoukville has even bigger infrastructure challenges than Phu Quoc. With the Vietnamese government willing to make the necessary investments to drive growth at Phu Quoc, the island is well positioned to make its way onto the global tourist map and attract more international services.

Phu Quoc International Airport has already come a long way since it opened in Dec-2012. As CAPA previously analysed, the opening of a new airport on the island led immediately to the launch of services on the Ho Chi Minh-Phu Quoc route from VietJet Air as well as an increase in capacity from Vietnam Airlines.

Vietnam Airlines initially upgraded about a third of its flights on the Ho Chi Minh-Phu Quoc route from ATR 72 turboprops to A321s and also launched five weekly A321 flights on the longer Hanoi-Phu Quoc route. The expansion from Vietnam Airlines and entry of VietJet, which initially served Phu Quoc with one daily flight, led to an immediate 60% increase in seat capacity.

Over the past year Phu Quoc has continued to see more expansion, which has more than offset the Mar-2013 suspension of services at independent regional carrier Air Mekong. Jetstar Pacific entered the market in Dec-2013, becoming the third carrier on the core Phu Quoc-Ho Chi Minh route. Vietnam Airlines and VietJet have both added capacity on Phu Quoc-Ho Chi Minh while VietJet joined Vietnam Airlines on the Hanoi-Phu Quoc route.

Vietnam Airlines currently operates 46 weekly frequencies on Phu Quoc-Ho Chi Minh. It has gradually upgraded more flights from ATR 72s to A321s and now operates 19 turboprop frequencies and 27 jet frequencies, according to OAG data. The carrier has grown seat capacity on the Phu Quoc-Ho Chi Minh route by about 14% compared to Jul-2013 and about 55% compared to Jul-2012 (when the old airport, which could not handle A320 family aircraft, was in use.)

VietJet Air also has expanded rapidly on Phu Quoc-Ho Chi Minh route and currently offers three daily flights, giving it 3,780 weekly seats and about a 34% share of total capacity. Jetstar Pacific currently operates one daily flight and accounts for an 11% share while Vietnam Airlines has a market leading 55% share, according to CAPA and OAG data.

A capacity increase from Jetstar Pacific is likely at a later stage as the route matures. 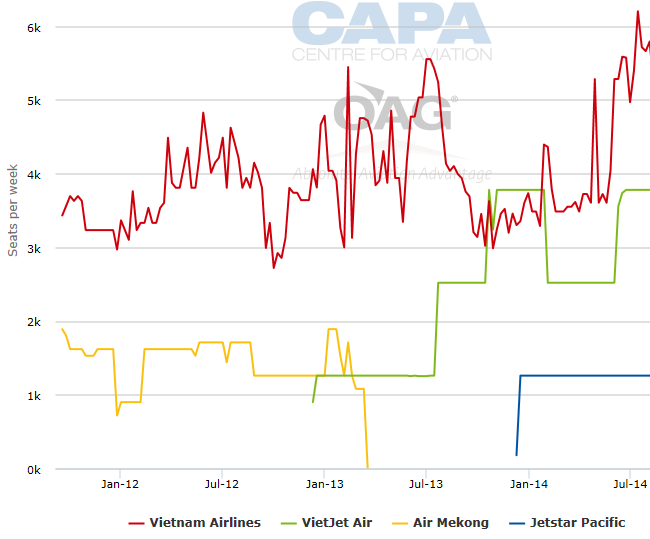 There will be a reduction in capacity on Phu Quoc-Ho Chi Minh after the current peak summer season concludes in Aug-2014 but this is normal. Phu Quoc has traditionally seen large seasonal increases in capacity in December to February and again in June to August. Phu Quoc’s lowest season is September to November as the island is often rainy during this period and it is also the low season for domestic tourism in Vietnam.

Back in 2012 the Phu Quoc-Ho Chi Minh route was also served by Air Mekong with 19 weekly CRJ900 regional jet flights. The opening of a new airport at Phu Quoc essentially destroyed Air Mekong’s niche, making it difficult for the carrier to compete as LCC entered and as Vietnam Airlines was able to up gauge to A321s. Air Mekong was headquartered in Phu Quoc and was heavily dependent on the Phu Quoc market although its base was in Ho Chi Minh.

Air Mekong also had been the only carrier offering non-stop flights from Phu Quoc to Hanoi, a route other carriers were unable to serve from the old airport as it was too long for turboprops and only Air Mekong operated regional jets.

Vietnam Airlines also operates one daily year-round flight from Phu Quoc to Can Tho in southern Vietnam using ATR 72s. The carrier’s total domestic capacity at Phu Quoc is currently about 18,800 seats, which gives it about a 55% share of the market compared to 37% for VietJet and 7% for Jetstar Pacific. 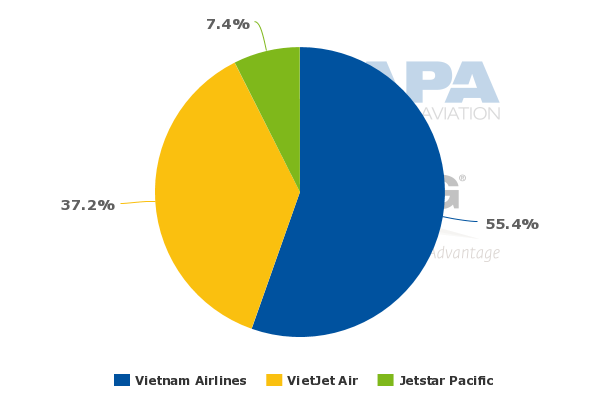 The airport recorded 34% passenger growth in 1H2014 to 450,000 passengers. Continued rapid growth is likely as the airport starts to attract scheduled international services.

Often a new airport at a secondary destination does little to drive traffic and turns into a white elephant. Phu Quoc International Airport has proven to be an exception and is poised for more rapid growth as Phu Quoc and Vietnam overall continue to emerge as a major tourist destination.