Ukraine International Airlines (UIA) is cutting capacity and reducing the size of its fleet in response to the challenging conditions in its home market. But UIA continues to expand its network with several new destinations to be added in 2014. The new destinations all have a high component of transit traffic as UIA seeks to offer more connections in a bid to offset declines in existing segments.

While UIA is significantly impacted by the crisis in the Ukraine its long-term outlook remains relatively bright. The early 2013 demise of AeroSvit left UIA as the only major Ukrainian carrier and UIA is now benefitting as much smaller and weaker competitors suspend or reduce operations.

UIA passenger traffic grew by over 60% in 2013 as it rapidly expanded its network and fleet to the fill the void left by AeroSvit. Traffic, load factor and profitability will decline in 2014 but UIA has the scale to survive.

UIA is by far the largest carrier in the Ukraine, operating a fleet of about 40 aircraft across a network of over 50 destinations. It currently accounts for about one-third of international seat capacity in the Ukraine and is the only Ukrainian carrier currently maintaining a sizeable presence in the battered domestic market.

UIA now plans to reverse some of the growth from 2013 as it expects a 15% to 20% reduction in the overall Ukrainian market for 2014. The total size of the Ukrainian market was roughly flat in 2013 as UIA along with several smaller Ukrainian carriers and some foreign carriers quickly expanded to fill the void left by AeroSvit, which suspended operations in Feb-2013. AeroSvit had accounted for approximately 30% of both the domestic and international market in the Ukraine.

UIA CEO Yuri Miroshnikov told CAPA on the sidelines of the 2-Jun-2014 IATA annual general meeting in Doha that the carrier’s fleet will shrink by about 25% in 2014. He says this will be achieved by a combination of ending wet-leases, negotiating early returns with leasing companies and returning aircraft that already had leases set to expire in 2014.

All the aircraft to exit UIA's fleet will be 737 Classics. UIA will maintain its fleet 737NG fleet at 12 aircraft as it has postponed plans to add any additional 737-800s or 737-900ERs. Mr Miroshnikov says the E190 fleet will also be maintained at five units. UIA sees its regional jets as a niche fleet for thinner routes and does not see a need to down-gauge more routes.

Based on the current fleet plan for 2014, the only aircraft to be added is a single 767-300ER. UIA committed in 2013 to acquiring and refurbishing three older model 767-300ERs, two of which were placed into service in late 2013 (prior to the start of the current crisis) and used to launch services to Bangkok. New York was added in late Apr-2014 as UIA’s second long-haul route. The carrier previously was an all-narrowbody operator.

New York JFK, which UIA is serving with five weekly frequencies after adjusting an initial plan for a daily service, is one of several routes being launched in 2014. At the end of May-2014 or beginning of Jun-2014 UIA launched services from Kiev to Dusseldorf, Stockholm and Tehran. Mr Miroshnikov says a few more new destinations to the east are also now under consideration.

The three destinations launched over the last week are not large local markets and have been added purely on expectations for transit flows. UIA needs to rely heavily on transit passengers to offset a decline in local traffic.

UIA has significantly expanded its transit traffic over the last few years from a very small base (about 10%) as it diversified its network, which traditionally was focused primarily on Western Europe. About 42% to 44% of UIA’s total traffic in 2013 was transit.

This figure has slipped to about 38% to 40% so far in 2014 but UIA seeks to increase it back to 2013 levels. UIA believes only by launching new transit-focused destinations and increasing the total number of available connections will it able to maintain its overall transit business because it has seen a drop in traffic on existing sixth freedom city pairs.

All of UIA’s existing segments – domestic, inbound international traffic, outbound international and transit – have been impacted significantly by the crisis in the Ukraine. Inbound traffic has been impacted by travel bans and advisories placed by foreign countries. Outbound and domestic traffic has been impacted by the political stability, which have led many Ukrainians to postpone trips, as well as weaker purchasing power due to the devaluation of the local currency

The Ukrainian Hryvnia dropped nearly 50% against the US Dollar in 1Q2014. As fares are sold in USD based on current exchange rates, average fares have increased significantly while local salaries have not been adjusted. Selling fares in USD allows UIA to offset the increase in costs caused by the devaluation of the Hyrvnian, but demand has been impacted. Ukraine point of sale currently accounts for about 28% to 30% of UIA’s revenues.

Meanwhile transit traffic has been impacted as some passengers are currently scared to fly through Kiev and are instead using competing hubs such as Istanbul. UIA believes by offering more city pair connections it can offset the decline across existing city pairs. The carrier is also cutting frequencies to several existing destinations to better align capacity with current demand.

Some under-performing destinations may also be suspended. Total capacity and passenger traffic figures will be down for 2014 although the overall size of network will still grow.

For the full year the market is expected to be down 15% to 20%. However, this figure is fluid as it unclear how fast the market will recover. While UIA is confident the market will eventually recover it could be 2015 before a significant improvement is noticed.

Current load factors at UIA are about 71% to 72%. While this is a relatively reasonable figure given the current situation, load factors are typically above 80% this time of the year. For the full year in 2013, UIA’s average international load factor was about 75% while its domestic load factor was close to 80%.

UIA has had to cut domestic capacity and suspend routes to the eastern part of the Ukraine near the Russian and Crimea border, where there has been a build up of troops and restrictions on travel. UIA currently offers about 12,500 weekly seats in the domestic market, compared to slightly more than 14,000 weekly seats a year ago, according to CAPA and OAG data.

UIA also has benefited as smaller domestic carriers have suspended operations entirely. For example UTAir Ukraine and Wizz Air Ukraine are currently not operating any domestic services, according to OAG data.

UIA was already able to increase its share of the domestic market to about 60% in 2013. While the overall domestic market is down significantly UIA’s share will likely increase further in 2014 as smaller domestic carriers cannot afford to continue operating. UIA’s much bigger scale and ability to offer international connections gives it a competitive advantage.

In the international market, UIA also has reduced capacity. But its diversified network enables the carrier to somewhat mitigate the damage and hold down the fort until stability improves.

Europe is UIA’s main market, accounting for about three-quarters of total international capacity. In 2013 UIA mainly expanded in Eastern Europe, which had been AeroSvit’s strength. UIA also expanded in Central Asia, the Middle East and Africa but on small bases. Prior to AeroSvit’s collapse UIA had nearly five seat times as much capacity in Western Europe compared to Eastern/Central Europe; currently the two sub-regions have relatively equal capacity. 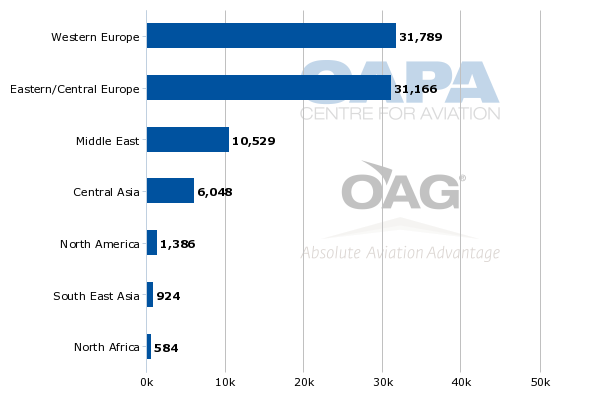 Ukraine-Russia market is a concern

Russia and Israel are UIA’s two largest single markets. UIA capacity to Russia is currently down 52% year over year, according to CAPA and OAG data. This is not surprising as the Ukraine-Russia market has obviously been significantly impacted by the current crisis.

There is a risk of a long-term impact as tensions between the countries are unlikely to ease. But as the market consists mostly of ethnic and visiting friends and relatives (VFR) traffic, demand could mostly recover once there is more stability. 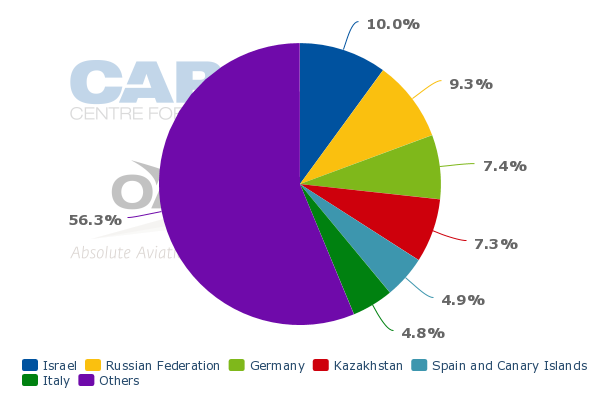 While UIA’s international capacity is down modestly and will likely be further cut, the reductions only offset a small portion of what was added in 1H2013 as UIA took over dozens of former AeroSvit routes.

The two carriers had competed head to head on a relatively small number of routes as UIA focused more on the Western Europe while AeroSvit focused more on Eastern Europe and Central Asia. UIA now has a more balanced network with about half of its destinations in Europe’s Schengen zone.

Southeast Asia and North America are new additions made possible by the acquisition of the 767 fleet. UIA’s first route to North Asia, Beijing, is expected to be launched once the third 767-300ER enters service.

Like Bangkok and New York, Beijing was previously served by AeroSvit. While AeroSvit’s collapse made it easier for UIA, the carrier was already preparing to expand into widebodies prior to the AeroSvit bankruptcy and compete in the Bangkok and Beijing market. Currently UIA is the only carrier operating scheduled services from Kiev to Bangkok to New York while Ukraine-China is completely unserved. (Delta dropped Kiev-New York services in 2011.)

See related report: Ukraine International plans to expand into long-haul operations in 2013 with Bangkok and Beijing

UIA had been planning to launch Beijing in 2Q2014 but recently postponed the launch until 4Q2014 as the carrier is still working to secure slots and final approvals. Mr Miroshnikov says the Beijing launch and completion of the refurbishment of the third 767-300ER could potentially be further delayed to early 2014. UIA may also consider Shanghai if slots at Beijing prove elusive. (As UIA plans to fly in and out of Beijing or Shanghai after midnight, a schedule which maximises connections in Kiev, slots should in theory be obtainable at either airport.)

UIA is content on limiting its long-haul operation to three aircraft and three destinations. This is a sensible strategy given current market conditions.

Even in more buoyant times, long-haul routes from the Ukraine have proven to be challenging and overambitious long-haul expansion from AeroSvit contributed to the carrier’s demise. In addition to the US, China and Thailand, the AeroSvit long-haul network also included services to India and Vietnam.

UIA will more likely resume narrowbody growth in 2015 or 2016 if the Ukrainian market recovers. Reducing the narrowbody fleet by about 10 aircraft in 2H2014 is logical as the carrier will still have the flexibility to add back aircraft later with the benefit of the additional aircraft being more efficient 737NGs.

UIA historically has been an opportunistic buyer of aircraft, acquiring second hand aircraft or new aircraft that were originally ordered by other carriers. It has not yet ordered any new generation narrowbodies but as the 737 MAX entry into service date approaches, 737NGs will become more affordable, giving UIA an opportunity to respond to any improvement in market conditions by taking more 737-800s or 737-900ERs. UIA will require several 737NGs as it expects to phase out its remaining 737 Classics by 2018. Growth aircraft are also likely as the carrier’s fleet will almost certainly come back and exceed the current level of about 40 aircraft over the long term.

UIA faces a very challenging year. But the situation is not dire and, as Mr Miroshnikov tells CAPA, UIA “will survive, no question”.

UIA enjoys a strong position in the Ukrainian market and has the ability to leverage its Kiev hub to pursue more east-west flows. Its long-term strategy remains intact and the decision to pursue capacity and fleet cuts over the short-term should improve its prospects - once political stability returns to the Ukraine. Hopefully that time will not be too distant.