Tigerair Taiwan has entered profitability after coming under the full ownership of China Airlines and separating itself from Tigerair Group as well as seconded management. After V Air ceased operation, Tigerair Taiwan became Taiwan's only local LCC but with accumulated losses of TWD1.3 billion (USD43.1 million). Tigerair Taiwan aims to reverse this within four years and is already under way with a TWD174 million (USD5.7 million) profit in 1H2017 compared to a loss of TWD420 (USD13.9 million) in 1H2016.

Tigerair Taiwan is being more flexible by accommodating tour groups and charters. A notable charter programme to Japan could lead to the airline adding scheduled service. Southeast Asia is of interest to Tigerair Taiwan but is over-competitive and faces protectionism via slot allocation. Korea is significantly under-served but bilaterally constrained.

Tigerair Taiwan will receive its 11th A320 by the end of 2017, slightly behind its original forecast of 12 aircraft in three years. Tigerair Taiwan is sensibly waiting for opportunities to emerge before adding aircraft.

Tigerair Taiwan started as a JV between China Airlines (90%) and then-Tiger Airways Holdings (i.e. Tigerair Group). The airline was announced in late-2013 and commenced services in Sep-2014. In Jan-2017, China Airlines took full ownership of the LCC.

From the start, the JV was unusual given the small shareholding of the foreign LCC franchise. At the time, the Tigerair Group was already under pressure to improve performance, especially at its overseas units. Adding a affiliate was counter to the strategy, but relatively low risk, given the small capital. Tigerair received a disproportionately larger branding presence, although whatever value this offered has ceased with the Tigerair-Scoot merger that saw the Tigerair group name cease to exist. The group's Australian unit, now under the control of Virgin Australia, continues to use the Tigerair Australia name.

There was no history between China Airlines and the Tigerair Group, or its then-part owner Singapore Airlines. (In fact, if anything, relations between China Airlines and Singapore Airlines were distant at best.) The JV came at a time China Airlines – then under a different government – had large aspirations to move upmarket and be one of the most premium airlines in the world, thereby creating space for a low cost affiliate. The Taiwanese government was also eager to see a local LCC since so many foreign LCCs were flying to Taiwan. Although the government's wish (subtle directive) was perhaps right, time was against new LCCs since foreign LCCs had had an early advantage.

Tigerair Taiwan's change in ownership occurred as Tigerair Group was winding down and as new China Airlines management saw the JV unfairly structured in that Tigerair Singapore had significant and even possibly illegal control of some aspects of the airline.

Tigerair Taiwan's Singaporean management was replaced but the brand and website (as well as Navitaire backend) were retained, partially out of simplicity. New management saw themselves willing to put Tigerair Taiwan into more of a hybrid category, such as by accommodating tour groups and offering charters, in order to reflect the realities of the Taiwanese market.

China Airlines president Hsieh Shih-chien told the Taipei Times in Aug-2017: "Tigerair Taiwan will no longer be purely a low cost carrier, as the business model is not viable... We are looking to add elements of a full service carrier to Tigerair Taiwan and improve the unit's collaborations with CAL".

Tigerair Taiwan has quickly turned around financial performance and is strategically improving. The airline reported a profit of TWD174 million (USD5.7 million) in 1H2017, compared to a loss of TWD420 (USD13.9 million) in 1H2016. In line with general market performance, the second half of the year – which includes the high-demand third quarter containing the summer season – should see even stronger performance.

Tigerair Taiwan attributes the turnaround to accommodating group travel, offering charters and being more relevant to the needs and opportunities of the Taiwanese market; there was a feeling that under the LCC's old management, the airline was run as a Singaporean LCC for the Taiwanese market. Tigerair Taiwan would also presumably now have to pay significantly reduced or eliminated branding and management fees.

Tigerair Taiwan to pause growth after 11th A320

There could be incremental improvements in market access to Southeast Asia, such as slots becoming available, but the competitive situation will not change. Larger growth opportunities could be unlocked if Tigerair Taiwan succeeds in reaching thinner Japanese markets, the Cross-Strait market rebounds, there is liberalisation (such as with Korea) or China Airlines (perhaps radically) realises some of its markets are better served by Tigerair Taiwan.

Tigerair Taiwan is interested to grow in Southeast Asia to diversify its network, bring more visitors to Taiwan and improve aircraft utilisation. Tigerair Taiwan’s network is heavily focused on Japan, which accounts for 56% of scheduled seats and 67% of ASKs, according to OAG Schedules Analyser data. 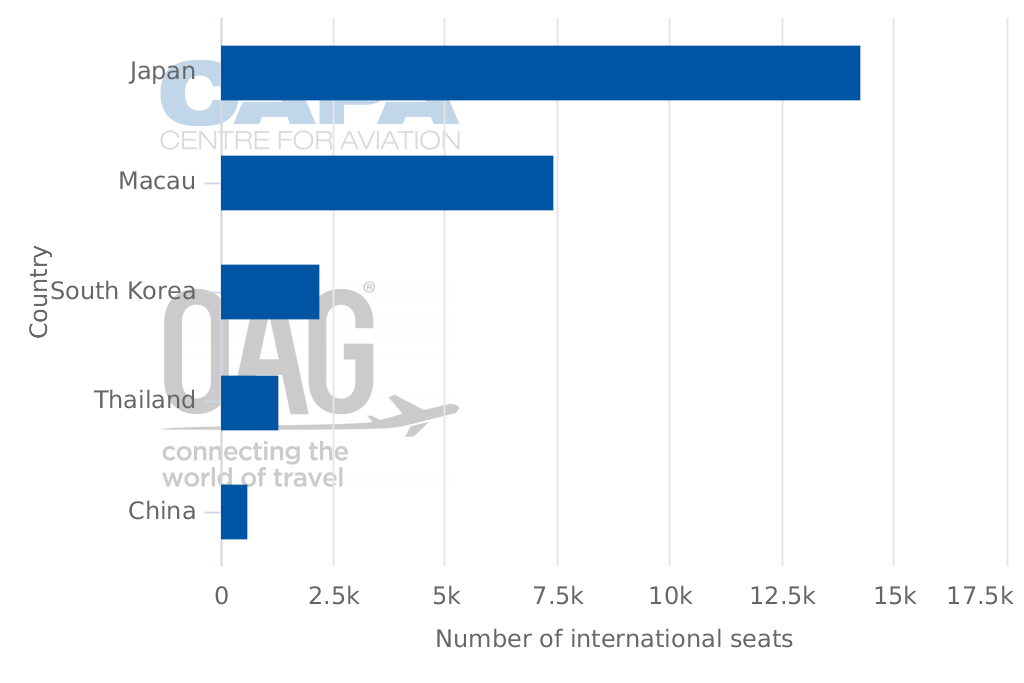 Japan is hugely popular for Taiwanese. Despite Taiwan being significantly smaller than Japan, in 2016 there were 4.2m Taiwanese visiting Japan, and 1.9m Japanese visiting Taiwan. 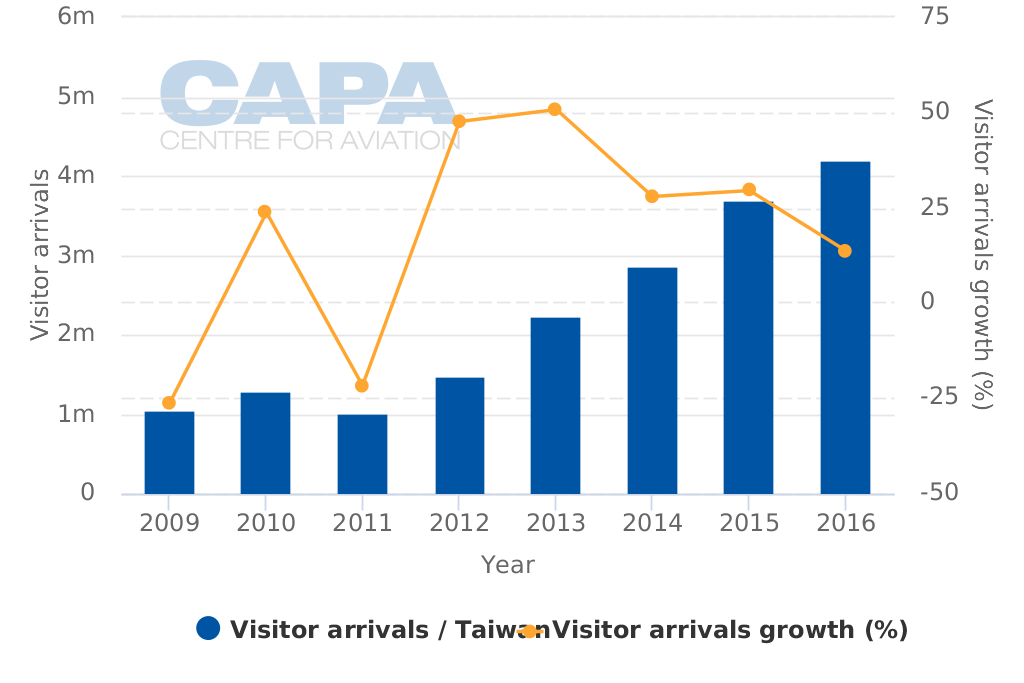 Besides diversifying options for the outbound Taiwanese market, growing in Southeast Asia would allow Tigerair Taiwan to target Southeast Asians and have a better passenger mix. In its main market of Japan, Japanese heavily prefer to travel on Japanese airlines. Residents of Taiwan account for 74.5% of Tigerair Taiwan passengers, according to the airline. Next-largest are residents of mainland China (8.6%), Japan (8.1%) and Korea (3.0%).

Commercially, however, Southeast Asia is challenging. Chairman Chang told the Taipei Times in Sep-2017 that Tigerair Taiwan has encountered significant slot constraints across Southeast Asia and at Bangkok the airline could not even secure night-time slots for an additional service.

Korea is under-exploited but has constraints

Tigerair Taiwan does not serve some of the largest airports in the region (such as Beijing, Shanghai, Hong Kong and Seoul) for various aeropolitical and traffic right reasons. The Korea-Taiwan market is under-exploited by LCCs from each market. The lack of flights is especially evident on the largest international city pair in the market, Seoul-Taipei. LCCs from Korea operate only 25 weekly flights between Taipei and Seoul. That is less than four daily flights and no LCC operates more than a daily flight. Tigerair Taiwan does not serve Taipei-Seoul, or Seoul from any Taiwanese city.

The 25 weekly Korean LCC flights account for a 22% share of frequencies but 17% of capacity since competitors use widebody aircraft. Full service airlines from both markets are eager for an expanded air service agreement but there are political obstacles. Cathay Pacific, Scoot and Thai Airways operate fifth freedom between Taipei and Seoul.

Second, Tigerair Taiwan has a geographical advantage. Japan has a few major cities and many secondary cities with service demand to Taiwan. In comparison, Taiwan's traffic is heavily centred around Taipei.

So Tigerair Taiwan, from its home at Taipei, can easily fly from its base to many Japanese cities and back. Japanese LCCs will incur higher costs to fly to Taipei from a Japanese city that is not their base. The aircraft rotation may be complex enough that LCCs – as a matter of low cost simplicity in their practices – will not undertake multi-city routings or flights that do not touch a base. So Tigerair Taiwan, as Taiwan's presumably lowest cost operator, has a large network of secondary Japanese cities to exploit.

Tigerair Taiwan has or is running charters to Asahikawa, Ibaraki, Obihiro and Saga. According to OAG Schedules Analyser data, those four destinations do not have regular scheduled service from any other airline, including China Airlines. Tigerair Taiwan aims to find new markets and not directly compete with owner China Airlines.

With Tigerair Taiwan now turning around, the airline can revisit the issue of branding. It is, however, still perhaps early days to define what type of airline Tigerair Taiwan will be in the future, and thus what brand it should take on. There is no rush to address branding: management can continue to bed down a difficult operation they inherited.

It is refreshing to hear of an Asian airline pausing growth so it can instead have a solid production platform. On the contrary, there could be concerns that forgoing growth now may preclude the opportunity when the airline thinks the time is right.