Thai Airways falls back into the red and faces challenging future

Thai Airways has reported its first quarterly loss in two years as the flag carrier struggles in the face of rising oil prices, intensifying competition and the economic downturn. Thai has particularly been impacted by Europe's challenging economy and Japan’s Mar-2011 earthquake. But it is also having problems closer to home in fighting off growing low-cost competition, which Thai is hoping to counter by launching two new airlines.

Total revenues were up 15% in 2Q2011 to THB45.559 billion. But total expenses surged 22% to THB51.518 billion, driven by a 40% increase in fuel costs despite only a 6% increase in fuel consumption. A THB425 million fuel hedge gain only partially offset the 46% increase in average jet fuel prices. Thai also recorded a 52% increase in aircraft maintenance costs due primarily to a higher number of required engine overhauls and a 46% increase in lease costs as the size of its leased fleet grew in size. As a result Thai incurred a pre-tax THB5.959 billion loss excluding the impact of foreign currency exchange. 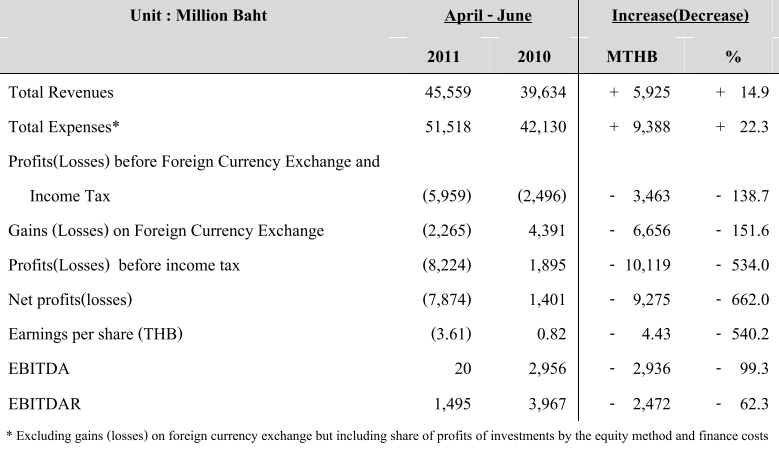 In addition to continued high fuel prices, Thai says its 2Q2011 performance was impacted by low seasonal demand, the global economic downturn and the earthquake in Japan. The carrier says its Japanese routes are typically some of its strongest performing but following the earthquake it had to cut capacity in Japan in response to weak demand. The earthquake also had a big impact on Thai’s cargo business, which recorded only a 3% increase in revenues in 2Q2011 to THB7.363 billion despite an 11% increase in cargo capacity.

Thai says the economic downturn significantly impacted demand from Europe. Revenues on European flights, which account for 21% of Thai’s total revenues, were up 13% compared to 2Q2011 (see background section). But Thai says the performance on European routes still fell short of expectations as competition was severe, making it impossible to cover rising fuel costs.

Thai has particularly struggled on its Frankfurt and London routes. In 1H2011, traffic was down 6% on Bangkok-Frankfurt and by about 12% on Bangkok-London compared to 1H2010. The load factor for both routes was in the low to mid 50s in May and June.

Other European routes performed relatively better, particularly Paris. But Frankfurt and London are by far Thai’s two largest and most important destinations in Europe, accounting for 35% of Thai’s total European capacity. Both are served with double daily B747-400 flights.

On a systemwide basis, Thai’s traffic (RPKs) grew 10% in 2Q2011 as capacity (ASKs) was up 7%. As a result, the carrier’s average load factor improved 1.8ppt but was still a relatively low 65.4%. The second quarter is typically Thai's weakest quarter. 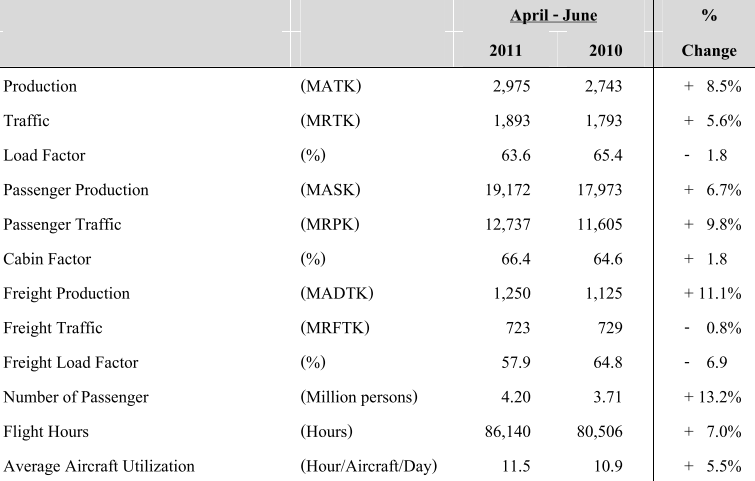 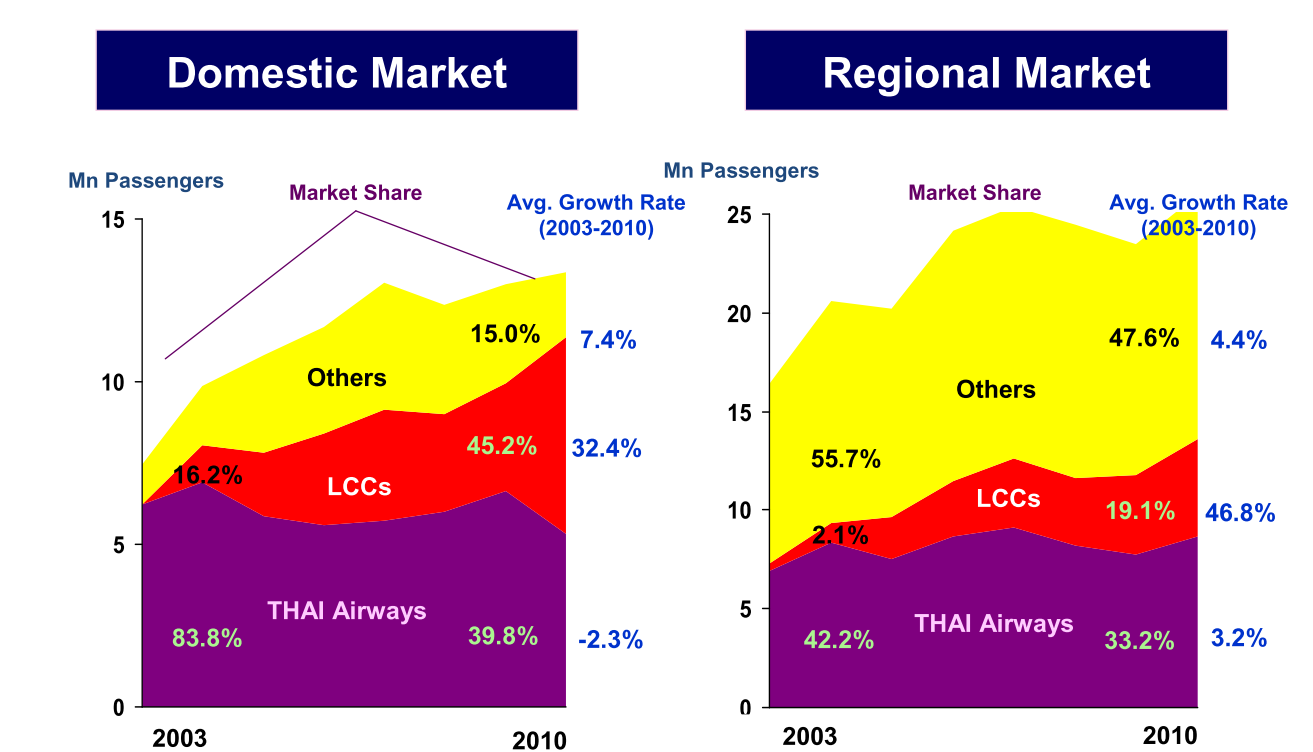 Thai is hoping to recapture market share in the domestic and regional markets through the launch next year of Thai Wing and Thai Tiger. Thai Wing will be a full-service regional carrier but will have a lower cost structure than Thai mainline. It will operate A320s on domestic and international routes, including existing Thai routes which are currently not profitable.

Thai Tiger is a joint venture with Tiger Airways and will a follow a pure-low cost model. If launched, it will only operate international routes while Thai’s existing low-cost partially-owned subsidiary, Nok Air, continues to focus on the domestic market. But Thai Tiger has not yet secured government approval, which is now considered highly unlikely. A rejection of Thai Tiger by Thailand’s new government could potentially result in larger roles for Nok and Thai Wing although, for now, Thai’s management is still hoping to have all four brands.

Thai, meanwhile, is hoping to reinvigorate its own brand by improving its service and product with the aim of making it one of Asia’s top four full-service carriers. Thai has embarked on a major fleet renewal programme and in the interim is also retrofitting its existing widebodies, including eight B777-200s and 12 B747-400s which will be equipped with new seats by the end of next year.

Thai Airways aircraft delivery and phase out plan 2011 to 2017 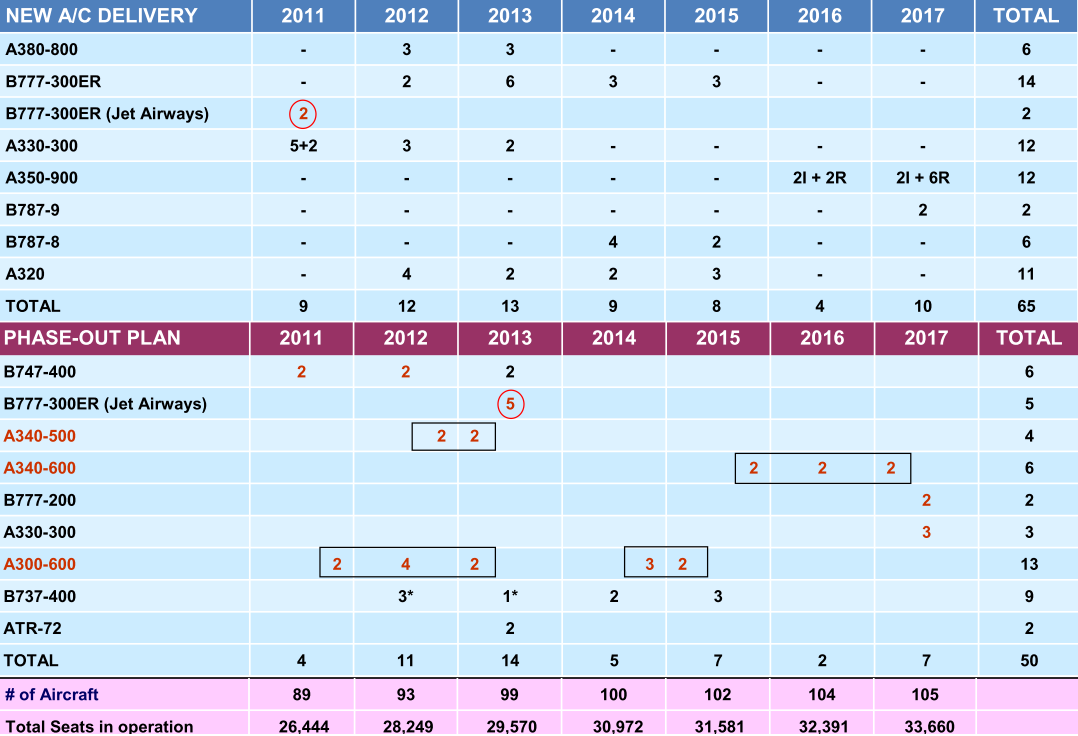 The newly revised aircraft phase-out plan also calls for Thai’s remaining B737s to exit the fleet 2012 to 2015. The four Thai-owned B737-400s that are now operated by Nok are to be phased out in 2012 and 2013 as Nok transitions to a B737-800 fleet (Nok’s B737-800s are not part of Thai’s new fleet plan because these aircraft are being leased by Nok directly without any assistance from Thai).

Thai's current fleet plan now lists the five B737-400s still being operated by Thai mainline for a phase out in 2014 and 2015. Thai is planning to transition to an all-widebody mainline fleet as it is envisioned Thai Wing will take over all domestic and routes which are not large enough to support widebodies. This is similar to the strategy now employed by Singapore Airlines and Cathay Pacific, which only operate widebodies and have their regional subsidiaries SilkAir and Dragonair operate thinner routes with narrowbodies. But by not phasing out its B737s to 2015, Thai loses an opportunity to reap over the next three years some of the cost benefits associated with the launch of Thai Wing.

Thai Wing will initially operate an all-A320 fleet, with four A320 deliveries planned next year followed by two in 2013, two in 2014 and three in 2015. While Thai for now envisions only a fleet of 11 A320s for Thai Wing it says “possibilities surrounding expanding fleet to include widebody aircraft will be evaluated as opportunities arise”.

A widebody operation for Thai Wing could potentially be a response to increasing competition from long-haul low-cost carriers following the upcoming launch of Singapore Airlines' new long-haul low-fare carrier as well as expansion at AirAsia X and Jetstar. Nok could also potentially be used to launch a long-haul low-fare operation but this is unlikely because Thai only owns a 39% stake in Nok and Nok seems content on staying within its current niche of operating domestic routes from Bangkok’s old airport Don Muang. By focusing on Don Muang, Nok is primarily a point-to-point operator while Thai Wing, which will be based at Bangkok’s the main international airport, will be used to feed and connect with Thai

While Thai has been trying to reposition the company to ensure sustained profitability, its short-term outlook is rather uncertain. High fuel prices and low demand, particularly on European routes, will likely negatively impact Thai’s performance for at least the remainder of the year. Many of Thai’s long-term term strategic initiatives could be adjusted by Thailand’s new government, which took office earlier this month.

See related report: The government owns 51% of the flag carrier and changes in Thai's management and strategy are typical when a new political party takes office.

Thai cannot afford to lose time in responding to the rapidly changing dynamics in the Asian airline market. Thai has already been significantly impacted by intensifying competition, particularly from low-cost carriers, and needs to press on with its new strategy.

It is unclear if the launch of Thai Wing and Thai Tiger along with improvements in its mainline product and an ongoing THB20 billion cost reduction initiative will be enough to position Thai for sustained profits over the long-term. But if any major elements of the strategy initiated by Thai CEO Piyasvasti Amranand, who has led a period of major changes since taking over at the end of 2008, are reversed the carrier could face even bigger problems competing in Asia’s dynamic marketplace. 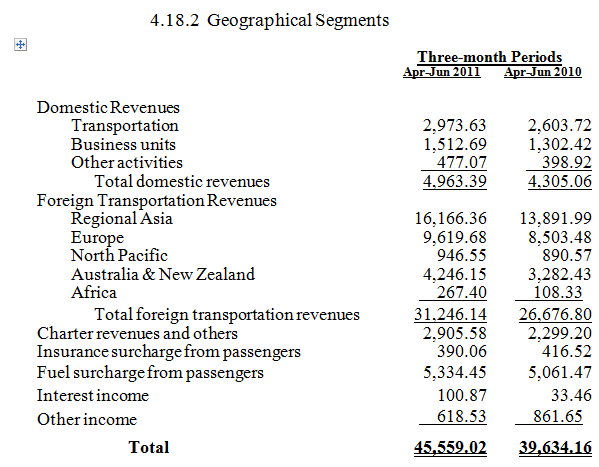