TAAG Angola Airlines is expanding its long haul operation following delivery of two additional 777-300ERs and is looking to build up its regional network. A new strategy being rolled out with the assistance of its new partner Emirates focuses on developing a hub in Luanda and pursuing more sixth freedom transit traffic.

TAAG recently added capacity to Portugal, the only European country in its limited long haul network. TAAG is now preparing to launch new European routes, taking advantage of opportunities made available by its recent removal from the EU blacklist.

However, TAAG faces huge short term challenges as the decline in oil prices has subdued demand in its home market. TAAG remains unprofitable, and it will not be easy to turn the airline around in the current environment.

TAAG has been highly unprofitable over the last several years. Losses widened in FY2015, to approximately USD140 million, compared with USD90 million in FY2014.

TAAG has been grappling with extremely challenging market conditions this year because Angola’s oil-based economy has been significantly impacted by the sharp decline in oil prices. On 11-Jul-2016 the Angolan government cut its GDP forecast for 2016 from 3.3% to 1.3%. Angola recorded 4% GDP growth in 2015.

Despite the current difficulties TAAG is expanding rapidly in 2016, driven by the delivery of two 777-300ERs that were ordered when market conditions were much more favourable.

The two additional 777-300ERs represent a 15% expansion of TAAG’s fleet and an even higher rate of capacity expansion.

TAAG also operates three 777-200ERs that are now nine to 10 years old. Its narrowbody fleet consists of five 737-700s, which gives TAAG the rather unusual distinction of having a larger widebody than narrowbody fleet.

Note: includes the additional  777-300ER which is expected to be delivered in Jul-2016
Source: CAPA Fleet Database

TAAG used the first additional 777-300ER to add capacity to Portugal. TAAG has two destinations in Portugal – the capital Lisbon and Porto in the north.

TAAG’s share of nonstop seat capacity in the Angola market has increased to approximately 65%, with TAP Portugal accounting for the remaining 35%. TAP currently operates eight weekly flights on the Luanda-Lisbon route using A340-300s.

TAP is the largest foreign airline in the Luanda market based on both number of frequencies and weekly seat capacity. 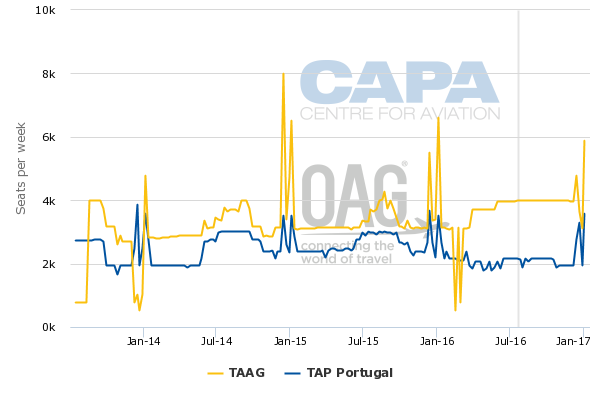 TAAG could add capacity to Brazil and China

TAAG has been considering deployment of the second additional 777-300ER to increase capacity to Brazil and China – its only other long haul markets.

TAAG had been considering a fourth weekly frequency for São Paulo and a third frequency for Rio de Janeiro, but for now it seems hesitant to add the flights given the current challenging market conditions in both Brazil and Angola. TAAG is the only airline operating nonstop flights from Angola to Brazil and from Angola to China.

TAAG plans to expand in Europe

TAAG now has the capacity to add flights to both Brazil and China but could instead be swayed to expand its European network. Expansion in Europe was previously not a possibility as TAAG was on the EU blacklist (with an exemption for its services to Portugal). TAAG was removed from the EU blacklist in Jun-2016, which enables it to add new destinations in Europe.

TAAG is reportedly preparing to launch services to two major European cities. Previous business plans envisaged new services to London and Paris, but it is not yet clear whether these remain the priorities under the new strategy and management team. London and Paris would not be new markets from Luanda but are relatively underserved.

Angola is expected to liberalise gradually, enabling foreign airlines to add capacity – although increases may be unlikely until the current economic environment improves. TAAG may strategically feel a need to add capacity to Europe ahead of the competition.

TAAG is also planning to expand its short and medium haul operation. TAAG currently has 11 international destinations within Africa but only one destination – Windhoek in neighbouring Namibia – is served daily.

More frequencies to several existing destinations are likely in order to facilitate connections to TAAG’s long haul network. TAAG is also considering several new destinations in sub-Saharan Africa, as part of an initiative to develop a hub in Luanda.

“In the past it has never been used as a hub”, TAAG CEO Peter Hill told CAPA TV in a Mar-2016 interview (see background information). “It now could be used as quite a significant hub for South and Southeast Africa … I think our growth will come not from traffic terminating or originating in Luanda but more from the surrounding countries in South and Southeast Africa.”

TAAG restructures with the help of Emirates

Mr Hill took over as TAAG CEO in late 2015 as part of 10-year management contract with Emirates. Emirates, which appointed Mr Hill to the TAAG post, is now helping TAAG restructure with the objective of becoming profitable by 2019.

The restructuring includes a major cost reduction initiative which is being achieved by renegotiating contracts and reducing staff levels through attrition. TAAG currently has a hiring freeze, which will remain in effect for another year or two, and is able to reduce headcount since it has a lot of employees approaching retirement.

Given the current economic environment in Angola, the airline is unlikely to improve its short term financial position significantly. Mr Hill pointed out that work on the restructuring plan began when fuel prices were over USD100 per barrel and the Angolan economy was much stronger.

However, with the help of Emirates, TAAG should be able to become more efficient, giving it a platform for profitability once its home market recovers.

The Emirates partnership will be key to TAAG’s future success

TAAG and Emirates initially forged a strategic partnership in late 2013. The partnership has progressed slowly but Emirates has started to become involved in TAAG over the past year and is now playing a key role in the development of a new business plan.

A codeshare between TAAG and Emirates is also now in the process of being implemented. The codeshare will enable TAAG to improve its offline network significantly.

Emirates currently operates one daily 777-300ER flight to Luanda from Dubai, giving it more capacity in the Angolan market than any foreign airline except TAP. TAAG dropped services to Dubai in 2015. TAAG and Emirates combined account for approximately a 53% share of international seat capacity from Angola.

The Emirates partnership clearly improves TAAG’s outlook. In addition to the network benefits, TAAG expects the relationship with Emirates will help raise its standards. The partnership has already helped raise awareness among TAAG staff, enabling staff to better focus on what is required to turn the airline around.

Turning TAAG around will not be easy, particularly if the current economic environment in Angola does not improve.

However, the airline seems to be making the necessary strategic adjustments to improve its position over the long run and to carve out a sustainable, but growing niche, in the challenging African marketplace.