At CAPA's World Aviation Summit in Hong Kong on 28 & 29 Nov-2012, Spring Airlines announced a significant expansion of its services between Hong Kong and mainland China, a high-demand market that has only recently seen competition. Spring's addition of services from Hong Kong to Chongqing, Hangzhou, Nanjing and Xiamen supplement its three daily flights between Hong Kong and its base at Shanghai.

Spring commenced services in 2005 as a LCC but is moving away from a strict interpretation of the model at it seeks higher yields, hybridising as other former LCCs have done. Its advantage and platform for growth is efficiency, which is generally lacking in China's state-owned airlines.

Yields are enviable with current lowest fares in economy giving a yield around USD8 cents per km. Unsurprisingly, the destination with the fewest competitors before Spring’s entry – Xiamen, with only Dragonair and Xiamen Airlines – has yields almost 50% higher at USD11.1 cents/km. Despite the yield premium, Xiamen will have the largest amount of one-way seats of any of Spring’s new routes at 10,160 a week. Whereas Dragonair is well-versed in marketing to a number of different markets, mainland carriers are still developing those skills, which further reduces the competitive pressure on Dragonair. 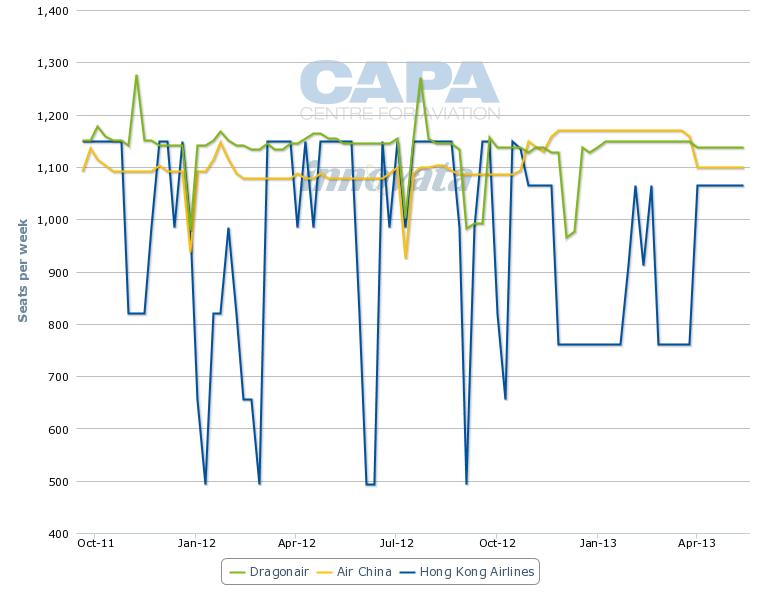 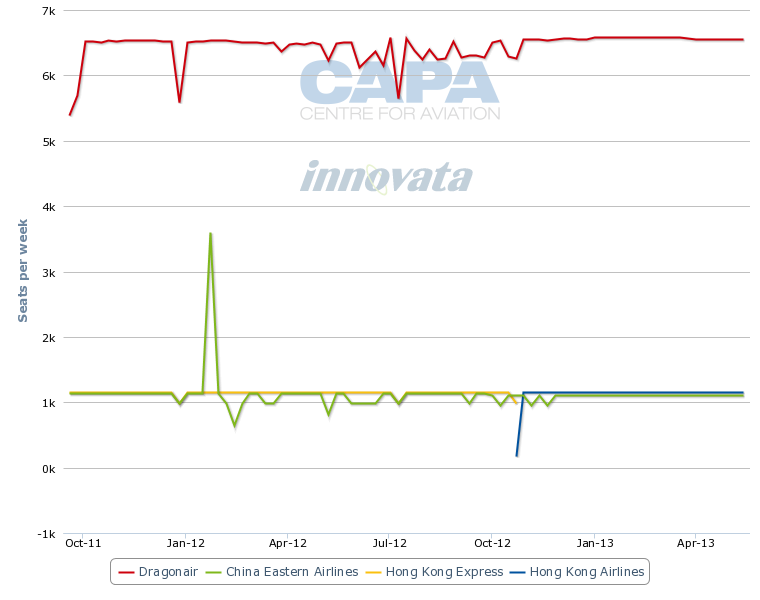 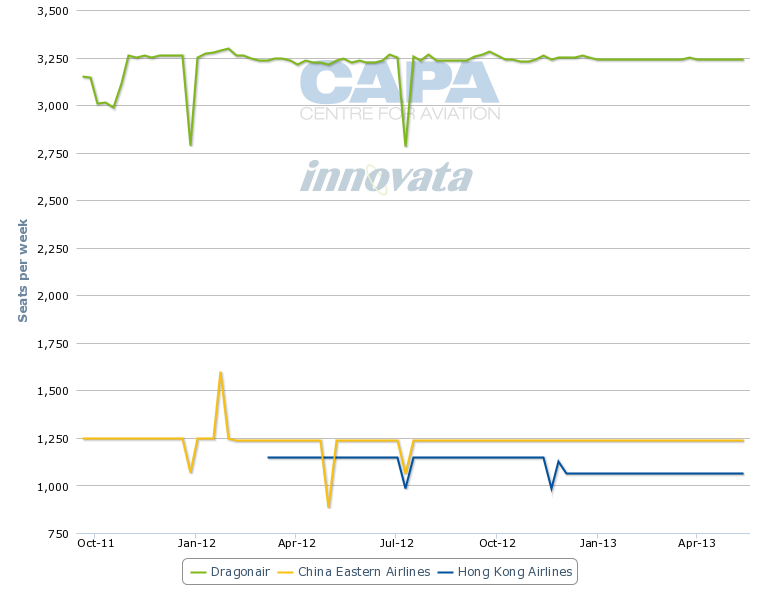 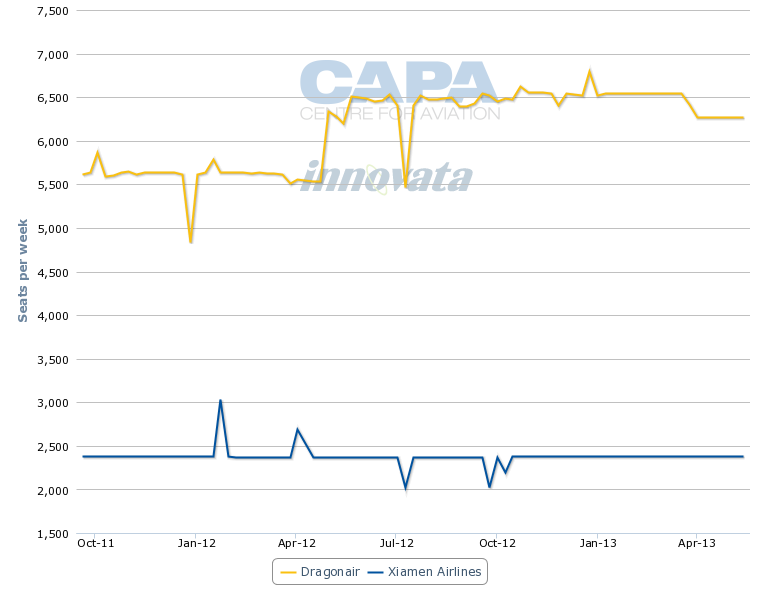 With Spring’s expansion, the carrier will serve four of the 10 largest routes between Hong Kong and mainland China. It currently serves one in the top 10 (Shanghai Pudong), but this will be joined by Xiamen (third largest), Hangzhou (fourth largest) and Nanjing (seventh largest). The last of Spring’s new routes, Chongqing, is the 13th largest route between Hong Kong and China.

In addition to Spring's upwards of three daily flights between Hong Kong and Shanghai Pudong, it has thrice-weekly Hong Kong-Shijiazhuang-Shenyang services.

All four destinations are popular for tourism: Chongqing is the starting point for cruises along the Yangtze River, Hangzhou is a large tourist city outside Shanghai (in testament to its status, Hangzhou was AirAsia X’s second destination but will continue to serve it even after it announced flights in Nov-2012 to Shanghai Pudong), Nanjing was a former capital of China and Xiamen is known for Gulangyu Island, heavy with European colonial architecture, a rarity in China. These attributes will likely be popular with the Hong Kong market. Price stimulation will be needed as some routes, like Chongqing, are seeing flat growth as connecting traffic that previously reached the destination via Hong Kong now goes direct.

In the reverse direction, Hong Kong carries considerable tourism appeal to mainland Chinese, and in particular for shopping as Hong Kong has no sales tax, whereas mainland China has high taxes for ever-popular luxury goods. It is not unheard of for passengers to be seen at the gate lounge for Spring Airlines with new Louis Vuitton handbags and iPads. The Chinese market, like almost any other, sees air travel as a commodity, in which the airline with the lowest fare is typically more popular.

It helps that Chinese aviation is nascent enough that there has been little time for airline brands to settle in – and, in turn, allow a stigma to be created against lower-cost carriers when they enter. The growth of the market, with demand typically outstripping capacity, means Spring is more typically creating demand than transferring existing demand to a lower-cost alternative.

The four new cities Spring will serve from Hong Kong will also see demand from business, which Spring is increasingly catering to by hybridising its model. The smallest of the four cities is Xiamen, with an urban population of around 1.8 million. The largest is Chongqing, with an urban population of around seven million. These cities are typically considered “second-tier” even though their populations far outnumber better known international cities; KLM flies to Xiamen from Amsterdam, which has half the population of Xiamen. Chongqing in particular is a high-growth city as it becomes the gateway to China’s expansive western interior.

These cities all could have been candidates for Jetstar Hong Kong, the planned Hong Kong-based LCC to start in mid-2013 that is a joint venture between China Eastern and Qantas’ Jetstar division. They may well still be, and while certain markets could see a raft of new capacity, the typical strength of LCCs in drumming up new demand – especially compared to their stagnating legacy competitors – may very well support their services. Mainland carriers, as well as Dragonair, typically have underwhelming marketing efforts, a result of high demand that is falsely perceived to not needing stimulation.

Spring’s expansion between Hong Kong and mainland China follows a difficult few months for the carrier after its main international market of Japan has seen weakening passenger traffic following a territorial dispute between China and Japan. Spring decreased capacity and also experienced a public rebuke after it tried to stimulate demand by offering almost free tickets. While traffic is still down significantly, All Nippon Airways believes the worse is behind it. Public sentiment has decreased since Beijing quelled anti-Japan demonstrations after they started protesting sensitive domestic matters.

Spring Airlines was one of about half a dozen carriers that were permitted to start in China in the mid-2000s as part of a wave of liberalisation (since then new carriers have formed, but only in partnership with existing carriers: Tibet Airlines owned by Air China, planned Fuzhou Airlines owned by HNA). Spring and Juneyao Airlines are the most notable and sizeable of those still standing. Some entered on a low-cost platform but either collapsed or moved to a full-service model. It is only Spring that has stuck through and grown as a LCC.

The carrier has kept control of its base, focusing on typical LCC practices like quick turnarounds and high utilisation (when permitted by China’s at times obfuscating regulator). The carrier also goes to the extreme – as it frequently mentions at presentations – of having staff share hotel rooms when travelling on company business, as well as skipping restaurants for instant cup noodles.

But Spring joins other carriers around the world in hybridising its model to pursue higher yields. It distributes via a GDS as well as China’s main online travel agency, has created a “Spring Plus” product that gives extra-legroom seats and meals and is venturing into a frequent flyer programme. While these initiatives add cost, they allow for a higher yield, thus giving carriers a higher margin than if they stuck to a bare-bones LCC model that may now only be embodied by Ryanair. AirAsia, airberlin, easyJet, jetBlue and even the grandfather of all LCCs – Southwest – have hybridised. Virgin Blue hybridised so much that with the mere addition of proper business class seats and meals, it became a full-service carrier (and re-branded to Virgin Australia).

Spring’s hybridisation has been underway for over a year as it sees the global trend in targeting yields, but also the local nuance of Beijing not throwing its entire weight behind self-styled low-cost carriers (Spring now bills itself as China’s best “value” airline).

See related article: China's Spring Airlines evolves into a hybrid carrier as it targets a Japanese operating base

The once dormant Hong Kong-mainland China market was neatly cleaned up by Dragonair but is seeing expansion as mainland carriers step up their efforts. Hong Kong Airlines and Hong Kong Express have been expanding rapidly in the market. The carriers in 2012 bolstered their position against Dragonair with a codeshare with China Eastern.

Jetstar Hong Kong plans to launch in mid-2013, serving Northeast and Southeast Asia with a large component focused on mainland China. Dragonair may have a lower cost than Cathay Pacific, but it is not a low-cost carrier and is indeed very much a legacy full-service airline. The opportunity beckons for Cathay Pacific to launch a dedicated low-cost carrier, but it appears anemic to this idea. Even worse, it takes the view that Jetstar Hong Kong may not secure regulatory approval to establish, and if it did, then it will have virtually no impact on its business.

There are tides of change from Dragonair to this changing market. As CAPA previously wrote:

Dragonair's service and branding has been intentionally stunted in order to provide segmentation between Dragonair and Cathay. Until recently, this strategy has been permissible as Dragonair's main competitors, mainland Chinese carriers, have networks and frequency that are much smaller; branding that is lower profile than Dragonair's; and weak international marketing, focussing instead on the outbound Chinese market.

Hong Kong Airlines took advantage of the gap by providing flights between Hong Kong and mainland China (and greater Asia) that are more or less the same as Dragonair but with more up-to-date aircraft, products and branding. Dragonair in the middle of last decade, prior to Cathay assuming full control, was planning a much-needed cabin refresh, but after the Cathay takeover the project was scrapped to maintain segmentation.

Dragonair CEO Patrick Yeung, speaking to CAPA at the Association of Asia Pacific Airlines Assembly of Presidents in Kuala Lumpur on 09-Nov-2012, said the product in both premium and economy classes will be updated on both narrowbody and widebody aircraft. As of 30-Jun-2012 Dragonair operated 13 A320s, six A321s and 16 A330s. The product upgrade will be accompanied with a new uniform to be introduced in spring 2013.

The Hong Kong-mainland China market is representative of the larger situation in North Asia, where lower-cost carriers (from Hong Kong Airlines to Skymark) and dedicated low-cost airlines (from Spring to the new startups in Japan) are challenging what has become a very stagnant order.

The LCCs are well-versed in plotting potential and seeing the affects of their peers in other markets, but the high-cost incumbents do not share this knowledge – or choose to ignore it. The global lesson is short: once they enter, LCCs cannot be unscrambled. Spring’s expansion in the Hong Kong-mainland China market maybe on a handful of routes with no more than one flight a day, but this will surely be expanded. Spring sees its potential and has the platform for growth. The question is if its competitors can say the same.