China's leading low-cost carrier, Spring Airlines, has been keeping a close watch on global LCC trends – and even hybridising its model in pursuit of higher yields. Spring has extended its new SpringPlus mini-cabin to over a dozen routes and has launched SpringPass, a comprehensive frequent flyer programme.

Spring continues to pursue the creation of a Japanese operating base. Although Japan this year will be inundated with new LCCs – including Peach, Jetstar Japan and AirAsia Japan – the region remains under-served, and Spring may gain more favourable Chinese government approval expanding in Japan rather than the domestic mainland China market, rife with government-owned airlines. As Spring builds further awareness, and hopes to launch services to Bangkok, it is also considering a re-branding.

Spring Airlines has targeted approval from the Chinese regulator, the CAAC, to operate red-eye flights as critical to boosting its aircraft utilisation rate, which was approximately 11.5 hours in 2010 and 2011. Approval would also present growth opportunities at Shanghai's otherwise congested airports. Airline spokesperson Zhang Wuan stated the late night flights “would be helpful to release the great pressure on the two airports in the city, while increasing the turnout capacities”. Airlines, however, face lobbying from residents who oppose additional noise.

Maintaining high utilisation rates is key to Spring Airlines' policy, which Mr Zhang stated is based on ‘Two Highs, Two Lows and Two Singles’. Two highs refers to high load factor and high aircraft utilisation rate. The LCC maintains an average load factor of 95% and aircraft utilisation that is two hours longer than the industry average. The two lows are low marketing costs and low management costs as “controlling operating costs is one of the keys to make profits”. The two singles refers to the carrier adopting a single class configuration across its single aircraft type of A320s. Spring operates a fleet of 30 A320s including 21 on operating leases and nine purchased by the carrier.

Shanghai Hongqiao, primarily Shanghai's domestic airport, is Spring's headquarters. Spring also has an operating base at Shanghai Pudong, as well as in Shenyang in the northeast and Shijiazhuang in northern central China. 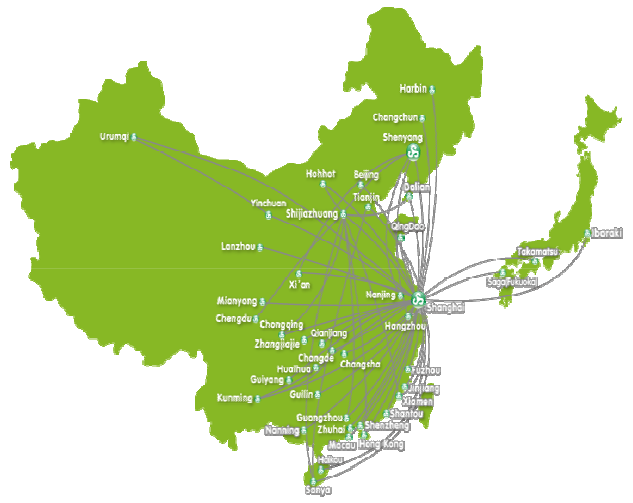 Spring Airlines chairman Wang Zhenghua, as quoted by Jiefang Daily on 09-Mar-2012, confirmed the carrier has commenced preparatory work on its plans to establish a subsidiary in Japan. He cited Japan as a key overseas market for the LCC among the markets within a five-hour flight radius from China. In late Feb-2012, CEO Zhang Xiuzhi stated the carrier had entered the final stages of negotiation with a potential Japanese partner, adding the carrier’s Japan JV carrier could launch operations as early as Jun-2013.

(NB: Ms Zhang will be speaking at CAPA's upcoming Airlines in Transition summit in Istanbul on 19/20 April 2012 about Spring's evolving business model).

Ms Zhang, as quoted by Beijing Business Times, did not reveal the potential partner but stated it is not a Japanese carrier. Spring Airlines has formally submitted an application to Japan's Ministry of Land, Infrastructure, Transport and Tourism (MLIT) to establish a branch company in Japan, with the carrier considering A320 or Boeing 737-800 aircraft for the Japanese subsidiary. The carrier noted that although Spring operates a fleet of all-A320s, the majority of Japanese pilots are more familiar with Boeing aircraft.

Meanwhile, Mr Wang last month stated he “wants to hurry and fly to Tokyo, Nagoya and Osaka”, noting that traffic between China and Japan has recovered from the Mar-2011 earthquake and tsunami in Japan. He stated visitors from China to Japan are expected to exceed two million within two to three years. Spring operates from Shanghai to three Japanese destinations including Ibaraki, Saga and Takamatsu. The carrier has also sought in recent months to increase frequency on these existing services. The carrier is also considering expanding its network to include services to Kumamoto, Tottori and Hokkaido.

Eyeing services to Bangkok and considering options for India

Spring also plans to open a route to Bangkok with A320 equipment from Shanghai during the summer 2012 schedule, as part of efforts to add routes to Southeast Asia destinations in 2012. Thai Airways is the largest operator between Thailand and mainland China. LCC competition is limited: Thai AirAsia serves Guangzhou and Shenzhen while Bangkok Airways has a twice weekly service to Guilin. But Thai AirAsia does intend to further expand into mainland China. If the carrier gains approval to operate to Bangkok, it would be the first time it has expanded beyond the Northeast Asian international market. At present, 92% of the carrier’s capacity (seats) are deployed domestically, with the carrier’s international network limited to five Northeast Asian destinations in Hong Kong, Ibaraki, Macau, Saga and Takamatsu, served by six international routes.

While Bangkok is a more immediate priority, Spring is at the very preliminary stage of considering how it might serve the Indian market, linking two of Asia's fastest-growing economies. There are few flights from Chinese or Indian carriers, potentially making the market more palatable to the Chinese Government to open up to Spring than markets dominated by state-owned carriers. Potential for Indian LCCs is limited if they remain with narrowbody-only operations due to key Chinese cities being too far from most Indian points. Chinese carriers, however, could use a central or western hub to access India with narrowbody aircraft, although, in Spring's case, that would entail having to support connecting flights.

Spring would need to establish a central or western Chinese base for Indian services, and potentially working in its favour is that China's current Five-Year Plan supports growth in central and western China. Air China has a strong base at Chengdu while China Southern is building its base in Chongqing.

For Spring Airlines, hybridisation not optional

While some airlines debate the benefits of a hybrid model, Spring Airlines views hybridisation as a necessity. "We believe that LCCs now need to consider what elements of the legacy product we can adapt to our own operating environments," Ms Zhang remarked last month. Airlines often pursue hybrid models for two reasons. First is the opportunity to gain higher yields from service and product improvements, almost always tied to targeting the corporate market. Second, and not always present, is the nudge to move upmarket as competitors narrow the gap on cost bases; many airlines have found it easier and more financially sound to move upmarket than attempt to take costs out.

Spring's moves are primarily driven by opportunity and not competition. Demand in China remains high, especially during national holidays, and Spring stands to gain higher revenue benefits from changes than the costs necessary to implement. While Spring faces no other domestic LCC competition, China's legacy carriers already operate relatively lean cost bases. Service and product innovation is slowly finding a place at legacy carriers, underscoring the need for LCC innovation. Some global hybridisation paths have seen the introduction of premium economy or even business class, but Spring is starting with a very low-risk option.

It is taking the front row of seats – in a 3-3 configuration but with extra legroom – and marketing them as part of its SpringPlus product, which also includes priority check-in and boarding, complimentary meals and ticketing flexibility. Prior to SpringPlus' Dec-2011 rollout (and a Sep-2011 trial), the front row seats, with about 42in of pitch, were given away at departure in a lottery that generated buzz. The service, as of early Mar-2012, was available on 13 of the carrier's approximately 60 domestic and international routes operated with a fleet of 30 A320s. A Jan-2012 sample study found SpringPlus to generally have favourable pricing over its competitors' first class and premium economy products. 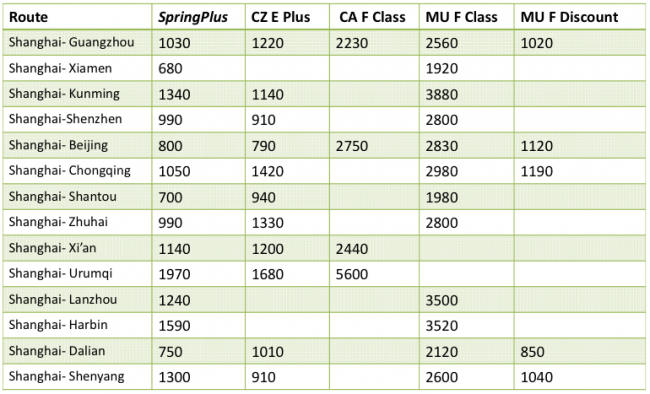 Learning where the money is: Spring launches frequent flyer programme

Spring has also evolved to include a frequent flyer programme (FFP), called SpringPass, launched in Feb-2012. Spring has followed the industry in allowing for redemption on not just air travel tickets but also packages and non-related merchandise ranging from a plastic cooking strainer to an iPad to a Mazda 3. Like other LCCs with a FFP, Spring has chosen to award points based on ticket prices and not distances flown, a system that in particular rewards high-spending corporate travellers taking up the carrier's SpringPlus offering. Points earned are calculated as a percentage of the fare, ranging from 5% to 15% (during National Holidays rates are dropped to 2-5%). The plastic cooking strainer can be redeemed for 34 points, the iPhone for 5099 points and the Mazda 3 for 147,800 points.

Spring allows passengers purchase points outright and is also evaluating earning opportunities from credit cards, typically the highest source of revenue for FFPs. In turn, FFPs can be very profitable corners for airlines, and even generate higher returns than flying divisions.

Meanwhile, the carrier now deploys its premium economy seats across 13 of the carrier’s routes from Shanghai, including Beijing, Chongqing, Xian, Xiamen, Shenzhen and Urumqi. Spring first trialled the service on its three times daily Shanghai-Guangzhou sector from Sep-2011. The product is a reaction to increased demand from business travellers, who account for three-quarters of total passengers on average, according to the carrier.

Spring is increasingly focussed on business travellers, with Mr Wang explaining that there is a growing trend for LCCs to attach “more importance to business travelers, as the clear-cut boundaries between legacy carriers and low-cost carriers are blurring in recent years”. “We used to only care about price-sensitive leisure travelers, but now we want to tap business travelers who want good prices and also a quiet environment,” Mr Wang added. To enhance its appeal, Spring is targeting services to key business destinations.

The broadening of focus has occurred as Spring Airlines has been forced to slow its rapid pace of expansion due to a shortage of pilots. The carrier, which is currently recruiting former Spanair pilots, will still grow despite the growth cutback, although it is introducing a new focus of more measured and strategic growth, with a new focus on expansion through JVs in other North Asian market and a new focus on business passengers. “Shareholders want to see Spring have a good and stable development. They don’t want to see any damage caused by overly aggressive expansion,” Mr Wang has previously noted.

As the carrier adapts its business model and expands into new markets, it is preparing to launch an IPO. Mr Wang this month stated the carrier is on track to complete its IPO in 1Q2012, adding preparatory work is progressing well and it is awaiting China Securities Regulatory Commission approval. Proceeds from the IPO will be used to purchase new aircraft to expand its route network. He also noted that the decision to launch an IPO and not introduce new strategic investors in the process is aimed at allowing more freedom to choose its strategies when facing competition from other airlines.

Mr Wang also stated he is confident the carrier will report higher profit growth in 2012. The airline estimates its 2011 profit to have reached approximately CNY500 million (USD78.1 million), exceeding its 2010 profit of CNY470 million (USD73.4 million), attributed to the overall growth of China’s aviation industry and the LCC’s strong load factor, averaging 95%.

Spring Airlines, since its establishment in 2005, has defied the odds by growing rapidly and profitably in the heavily regulated Chinese market that favours the larger, state-owned carriers. While it has had success as the nation’s largest LCC, it has faced a number of challenges, although it has been quick to adjust its model and operations in reaction to prevalent industry and market trends and operating factors.

Spring's strong run of profitability and newly granted access on key domestic (such as Beijing-Shanghai) and an increasing number of international routes gives it every reason to be confident of its future growth prospects, despite the limitation imposed by a lack of pilots. A successful IPO will only embolden the carrier as it looks beyond the Chinese border.